How to spot the beginner photographer. Some funny mistakes rookies make. 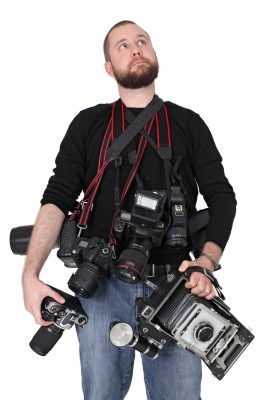 Before we get started, it’s fair to point out that all of us, even the top photographers of the world, were once beginners. It is the natural way of things, and although many are born with amazing talent, no one is born with the skill. That is something you acquire through years of practice and the length of the journey is different for everyone. The learning process has its ups and downs, but sometimes it can be a lot of fun. Here are some of the funniest (although they may not seem so at the time) mistakes a rookie can make. Pointing them out is not meant to offend anyone, because, let’s be fair, who among us has not made at least one of them. Here they are.

Leaving the lens cap on

I don’t think I know a single photographer that hasn’t had this happen to him. It even happened to Kobe! It’s one of the most common mistakes made by beginners, and you can see it happening a lot around tourist attractions or at certain events. Seasoned pros eventually grow out of it, but there is no cure for forgetting to take of the lens cap, so even they have to deal with a few laughs from the crew every now and then. Make sure not to lose your lens cap however, as it plays an important role in protecting your lens, regardless of having a UV filter mounted or not.

While some may not think of this as a mistake, I would say it is. It’s natural to be reluctant to having full control of the camera, and no one says you should right away, but perpetually using your camera on Auto won’t bring you technical progress very much. Take it step by step and don’t let yourself get caught “shooting in the green” a long time after acquiring a proper camera.

Forgetting the memory cards at home

I know I’m guilty of this one and I’m sure I’m not the only one. It could happen to anyone to leave their memory card in the card reader, on the table or whatever, and go to a shoot (or worse, a wedding) only to read the dreaded E sign. The best thing to do is not panic and definitely not show your client that something is wrong. Quietly retreat to a more private space, gently take out your phone and dial that special friend you have that’s on call 24/7, and with a mild, soft tone of voice, tell him or her to stop whatever they’re doing and get there with a memory card as quickly as possible. When they show up, introduce them to your client as your voice activated light stand, or the special, moral support unit (I’m kidding on this one, don’t make your client think you need anything like that.)

Using the pop up flash

It never stops being funny when you see someone putting a camera to their eye to frame, and just as they’re about to press the shutter release, that wonderful invention called pop-up flash…well, pops.

Unless you’re using it to trigger other flashes in lighting setup, or for slow sync effects, please understand that the pop up flash is mostly there to help sell the camera. It doesn’t do very much for the overall esthetic look of your photos and you should only use it under extreme circumstances. Otherwise, let’s be grateful that today’s camera sensors do a pretty good job in low light without using flash.

It’s rare and I wish I was joking about it but I’m not. I’ve had the occasion of seeing people try to hold a smaller DSLR, probably a D3100 like it was a compact camera. Luckily, this one guy had it strapped around his neck and it didn’t break into pieces when he dropped it, yet somehow he still seemed surprised about the poor grip.

Having your circular polarizer filter mounted all the time

This rookie mistake is quite common, especially for beginners who become fascinated after seeing the effects of these filters on their photos. It’s like they want them all the time, even indoors. Unfortunately, it doesn’t work that way because polarizers will underexpose by approximately two-three stops. So next time you plan on photographing indoors, make sure to take it off.

Tilting the horizon. All the time

It’s ok to use a tilted horizon from time to time. It gives a dramatic effect and can contribute significantly to the visual appeal of the photograph. Using it all the time however is a big no-no. I’ve heard of entire weddings photographed titled , and while I don’t know if it’s true or not, I do know that it’s a mistake often made by beginning photographers who haven’t quite learned about composition.

The rookie photographer will be seen photographing exclusively from eye level. It’s usually not because he has a back problem or because he is too short, but because he hasn’t yet realized that looking for a different perspective will make his photos better. It’s an honest mistake and all of us have made it, but once you see the fun in crawling, stretching, hanging and generally feeling very uncomfortable while shooting, you’ll never want to go back to plain old eye level.

Sounds fun, right? Again, it’s an honest mistake than I too can admit to every now and then. You might take your camera outside with the settings for indoor shooting and not have the time to check it. Then you look at the LCD screen and see everything in an eerie blue tone. It’s 100% correctable if you shoot RAW. However, it will take a lot more work in post processing a JPG to change the tone because often the color temperature is just too cold.

Now that you’ve wondered how many times you’ve made these mistakes, know that it’s ok and there’s nothing to be ashamed of. We’ve all been there and it’s only a serious mistake if you keep doing it.