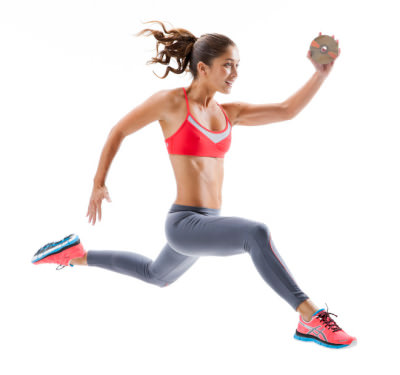 In this lesson, Ian Spanier shows how adding something as simple as a Photoflex WhiteDome to an overhead light, even when used on a white set, can make a subtle, but important difference. As you'll see, the WhiteDome can be used to enhance some of the more subtle highlights and really make them sing. Sometimes, that's all you need to create a more polished, commercial look.

Setting the Lights
I’ve been shooting exercise and fitness for over eight years now. With few exceptions, I know what I’ll be setting up prior to the shoot. This shoot for Shape Magazine was similar to ones I’ve shot previously for them. But this time, rather than rent a Profoto Globe accessory for the hair light, I wanted to try out an alternate solution that would work for these types of assignments – on location, but more like studio shoots. I do like the quality of light the Profoto Globe provides, but it’s not easy to travel with. One other downside, and the reason I have not purchased any Globes, is that they retail for around $650!

I like to impart to students and other photographers about the advantages of owning some or all of your own equipment in order to make a bigger profit on the assignment. At around $165 per unit, Photoflex’s Medium WhiteDome is not only a less expensive solution, it’s also better for travel, since it breaks down easily and compactly. The removable black/silver sides and internal baffle are an added bonus, as they provide much more control over the feel of the lighting. And at that price, it’s a no-brainer to get two. I should mention, don’t let the price fool you – these soft boxes are built to last. I’ve owned different Photoflex products now for 20 years that I still use!

Some might presume that a hair light is unnecessary on an all-white setup with light bouncing in every direction, but I've discovered otherwise. The added hair light not only gives your subject a nicer edge, but also adds a nicer highlight to the body. It's a subtle difference, but certainly noticeable. Getting this to work on white is not difficult for anyone who already shoots with supplemental lighting, but I’ll go over my settings for those who may not have tried it.

Background Lights
Starting from the back (which is how you should always build a set), the cyclorama was lit with four heads that had reflectors and umbrellas attached. On each side, two lights were mounted to a C-stand - one on top of the stand and the other attached lower with a pin and Superclamp or Mafer clamp. V-flats (two 4'x8' sheets of black/white foam core joined at the vertical edge) block light from hitting the model.

Hair/Rim Light
Overhead, the WhiteDome was set 2/10ths of a stop lower than the main light, which is generally ideal for me. Positioning this overhead light is crucial. It should NOT be directly over the model, but somewhat behind them and aimed at the bottom of the their neck, just at the top of her shoulders.

Note: Often, when setting the back V-Flats, I will have to angle them out a bit so that there’s no hard line created from the umbrellas, which can be particularly noticeable in smaller studios. But the WhiteDome works to fill the floor in as well, which helps to eliminate the hard lines.

Fill Light
Inside the Medium MultiDome, which was powered 2 stops below the key, I configured the inserts to be alternating gold and silver so that it had a slightly warmer fill. The key light, a Medium OctoDome, had one baffle (diffusion face) removed and a strip of 1/4 CTO (Color Temperature Orange) gel attached to the baffle. I find this warms up the light just enough for my tastes.

All the images below are un-retouched, so you can see what they looked like straight from the camera. We first shot without the WhiteDome, so that I could see if my theory about the highlight would be correct.

As you can see, the highlight on the model with the WhiteDome firing is subtle, but I think necessary. You can clearly see its effect on her hair, but it’s the light on her shoulders that I really like - particularly with how it wraps around her collarbones.

With the exercise shots, you can really see how the light from above creates a beautiful line along her extended arm or leg. Without it, it falls a bit flat for me.

After finishing all the exercise shots, it was time for the article’s opening image. The theme of the article was about these recommended DVD’s (which is why the model is holding a DVD). We aimed for something dynamic at first, and then also covered the safer, more still kind of a shot.

In the end, the editors went with the more still shot. Here's the layout of the rest of the article.

Final Notes
All in all, I really like how the light works when shot through the WhiteDome. With magazines all facing tighter budgets these days, the quality of paper is never a guarantee. When an article is shot on white, you always run the risk of seeing the type from the previous or next page showing through the paper. This lighting scheme, despite many of the thinner papers, looks great. The highlights hold up, and in my opinion, the added WhiteDome was the best way to accomplish this soft, subtle highlight.

I have since used WhiteDomes on a few more shoots, combining two as highlights, firing from far above at the subject, and really got great results. The black/silver removable side panels are a great feature and can save you needing a flag in some cases, and it converts into a traditional soft box as well!

To see more of Ian Spanier's work, check out his Pro Showcase page