Reasons Not to Use Your On-Camera Flash 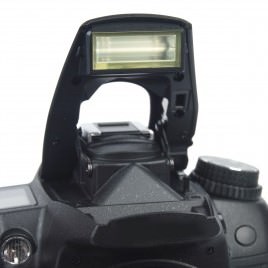 In some scenes, particularly those that are poorly lit, you will need a flash to properly light your subject(s). The simplest solution would be to use the flash built into your camera, and while they may work in a pinch, there are several reasons why you should use an off-camera flash rather than your built-in or mounted external flash.

Built-in flashes are never very powerful and the light falloff is always dramatic. If you've seen photos taken with a disposable camera, you'll notice that the subjects in the foreground are often overexposed while the background is underexposed. This is typical, as the camera is trying to light the whole scene, but can't due to its low power. The result is an often a photo of you family member with washed out details in their face and clothes and a background so dark it's almost unrecognizable. Of course, most cameras will have a better flash than a disposable, but they're still very limited.

Directional light is that that comes from the camera and shines straight at your subject. This lighting is unflattering about 99% of the time. Why? Because it's very unnatural. We don't see people with lights pointing straight at their face from where we're looking at them. That would mean we have a light strapped to our heads or something. Normal light comes from above and often from the side, but rarely from below and never from our foreheads. This is why so many photographers advocate off-camera flash. It immediately makes your photos look more natural. Even if you have an external flash, don't mount it to your camera. Move it to the sides and/or above your subject. Experiment. Just don't leave it on top of your camera.

Everyone knows what red-eye is and nobody likes it. Red-eye is only visible from a very small angle which is close to the light source that's shining at the subject. In other words, right where your lens is. There are many programs that can easily remove red-eye, but avoiding it in the first place is your best bet, especially since it's a result of directional light which should be avoided anyway. Moving the flash away from the lens will get rid of red-eye completely.

Another reason built-in flashes look so bad is because they're very harsh. There is very little diffusion (if any) which causes powerful highlights and dark shadows, in a bad way. You also often lose detail in textures and skin, and colors can be washed out.

Ever see those little rectangles floating around in your vision after someone takes a photo of you? That's from the flash. Because it's undiffused, it makes a temporary burn on your retina (the same happens when you look at the sun without protection), and because it's right next to the camera's lens, it will be almost in the middle of your vision, which is annoying. Nobody likes to be blinded by camera flash, especially when it's unexpected. Softer lights farther from the camera will not blind your subject.

Also Read: Important Things to Look for When Investing in a Flash