6 steps for successful photography in public 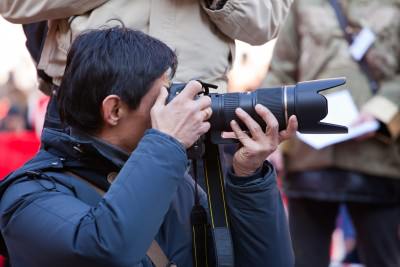 Public places, crowded ones especially, can offer amazing, ongoing shows. The diversity of characters can sometimes be incredible and opportunities for great photos are at every step. This is especially true in large cities. However, photographing complete strangers on a public domain can be difficult and it can bring unwanted hassle. It does take a certain amount of courage, but it also requires tact and intelligent thinking. Here are 6 steps to help you capture great photos next time you hit the streets.

Unlike all the other times when you should do something just because people say you can’t, this time it’s in your best interest to accept denial. Some people simply don’t want to be photographed, for whatever reasons, and you should respect their decision. Failure to do so might result in damaged camera equipment, the occasional brawl, or a ride in a Police car. Make sure you respect rejections.

People who are in love make great subjects, however, it’s not always very fortunate to capture them. Not for both parties anyway. When you see two people holding hands and kissing, don’t assume they’re married or together officially. I don’t want to get into any kind of debates on loyalty and cheating, but the fact is it happens. You might get a fantastic photo of a very cute couple, but publishing it online (think Facebook along with some tags provided by someone else) could impact their lives in a negative way. It’s best to ask permission when dealing with a couple as a subject.

I don’t mean ugly or pretty, but rather scary, friendly or neutral. The last thing you want to do is go to a park full of young moms with kids dressed like the bad guy from a horror thriller. In some places you’ll probably be surrounded by cops before anyone gets the chance to see what you were pulling out of the bag. It doesn’t mean you should fall into the other extreme, so leave the ultra-friendly Hawaiian shirt at home. Carry yourself like a professional or at least someone who isn’t trying to get noticed but doesn’t avoid it either.

If there’s a crowd it doesn’t necessarily mean it’s public domain. Be especially careful around shopping malls or other areas with similar purposes. They are usually owned by someone and each have their own private policies regarding the use of cameras.

If you are shy about photographing strangers in public (a lot of people are, it’s ok), it could be a good idea to start shooting with a telezoom. It will keep you at a safe distance and it will also give the photo a certain intimacy. However, I don’t advise abusing this technique. The greatest street photographers in history were the guys and gals who got close and personal with their subjects. All it takes is a bit of confidence and practice.

Every city has its “hot spots” for photographing people. The larger the city, the more spots. For smaller towns it could be just one or two areas; however the show is always different. Even if the background is the same, the scene could be entirely different every day, sometimes every hour. If you took some photos in a certain areas, it might be a while before the next few ones are as good, but you should return on a constant basis. It’s a bit like fishing, the usual productive spots are your best bet.