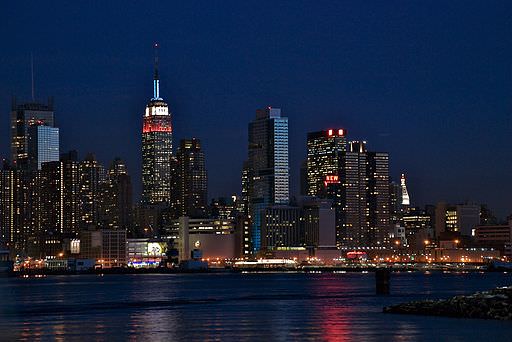 One of the concepts with which beginner, and even intermediate, photographers struggle is that daylight is required for the best photos. In reality, every time of the day, every place and any level of light can offer excellent subjects and compositions. The urban landscape is one of those places that often assume a quite different persona at night because there is very little ambient light, most of the light will be artificial. Details often melt into shadows that only appear at night. The first secret to finding urban photos at night is your willingness to explore this environment with your camera. These 9 tips will help chase you from your house, comfortably sitting in front of your TV, and into the night.

If you’re new to nighttime urban photography, then the best location for your first expedition is the center of the city. There will be more artificial light in the form of streetlights, signs, etc., more human activity and more architectural features that may be uniquely lit or look quite different than during the daylight. City centers tend to be safer too, but consider being accompanied by a friend or a photo buddy, so you have an extra pair of eyes.

Even if you know your city well, spending some quality Internet time may help you pinpoint the exact locations you want to shoot. You may also find photos of your city at night that will inspire you or save time searching for the best subjects and camera positions from which to shoot them.

Your best schedule for nighttime urban photos actual starts at sundown. During the next 30 to 40 minutes is considered twilight; and there will be enough light to help you find your locations. Plus, twilight is considered one of the “magic hours” of the day, when the light is softer and more diffuse, making for much better light to photograph almost any subject or landscape. The slowly darkening sky makes for an excellent backdrop for cityscapes and other urban images. When total darkness arrives, you’ll have already been shooting and may be in positions that are equally excellent for those nighttime images.

Many, if not most, of your urban images at night will be shot at very slow shutter speeds; meaning a tripod and remote shutter release are absolute necessities. Some images could be shot handheld, such as street scenes from a waist-high camera position, when you purposely want to create some movement or grittiness, but you’ll also want to be able to capture sharp, detailed photos too.

Most of the urban subjects and scenes available to you dictate the use of a wide-angle lens, such as 24mm. The city is so crowded and so much of it is not accessible to a photographer, your shooting locations and angles will be limited. A wide-angle lens will help to include more of the scene. Don’t forget your lens hood, which works quite the same at night in the city as it does during the day. Instead of blocking lens flare from the sun, the hood will reduce any flares from bright lights that may be shining or reflecting into your camera.

Because most of your shooting situations will require longer shutter speeds, as much as 1 or 2 seconds, it’s best to select shutter speed priority mode. Your decisions about the amount of light required will be more accurate, as you improve your understanding of the mix of ambient and artificial light. At these slower shutter speeds, you’ll also be able to set the ISO at a low number, which contributes to sharpness and the reduction/elimination of any noise. Urban nighttime photography is also a good opportunity to practice using full manual mode if you don’t have much experience with it. You want plenty of depth-of-field for your cityscapes and urban photos, which mean selecting an f-stop of f/11 or f/16. These narrow apertures are only usable with slow shutter speeds.

No, we’re not suggesting combining photography with streaking. Instead, shooting your images in RAW mode will allow you to correct white balance during post-production. The various sources of light throughout the city will present your camera with a wide range of light temperatures, so it’s unlikely your camera’s auto white balance will accurately record what it is seeing, so you want to be able to fix it as an editing function.

With those slow shutter speeds, the light that appears low to your eyes will create spectacular cityscapes in your camera because more of the ambient and artificial light will be captured. This means that almost any subject, object or space that has a light source or is illuminated by others is a target for your photography. Often, details of architecture and the vast skyline will be sharper because every edge and contour of the various surfaces create deep, thin shadows. Plus, your slow shutter speeds allow the camera to capture more of the light that distinguishes the bright from the almost black areas and the sharp demarcation between them.

The city often moves to a different rhythm at night, one that can’t be seen or photographed during the day. The night is when light sources are on the move: vehicle headlights and secondary lights, flashing signs or a lit carousel in the park.

Here is another very good reason to shoot in shutter priority mode. You can use it to determine the correct shutter speed to allow the moving lights to move from one side of your frame to the other or cycle through its series of lights, as in a sign. Check a practice run before selecting a shutter speed. Simple time the movement of a car, for example, across your camera view, and then start with this as the shutter speed time. Be prepared to experiment, as not all lights will move at the same speed.

Once you’ve determined the proper exposure to capture moving lights, you then want to use the moving lights as creative and compositional elements. A different feel will be conveyed if the lights are moving toward or from the camera. You may want to find a position, so the moving lights create a pattern between the buildings or recede into the background on parallel tracks to give your image more depth and draw viewers into it.

Urban nighttime photography is often its most dramatic and spectacular when you create a panoramic image of the entire city. If you’re not familiar with using your camera’s panorama feature or creating panoramas in post-production, nighttime photography provides you with an excellent learning experience.

Generally, you’ll want to find a shooting position at some distance from the city and one that shows it at its best and provides plenty of contrasts between tall and small buildings, the inclusion of bridges, a waterfront, watercraft and the ribbons of freeways entering and leaving the city full of streaking lights.