Making The Lit Look Unlit
Photographers just starting out with lighting equipment can make the mistake of showing too much in their work: it's generally easy to spot when supplemental lighting gets used. But it takes practice and finesse to create images where additional lighting tools do not draw attention. It is similar to how a soundtrack serves a movie. When done right, you are not conscious of it, but it enhances your overall experience.

To capture images this way, it helps to have lighting tools designed to create natural-looking light. While many photographers prefer to shoot only under natural light conditions, that can be limiting, as it is often difficult to control elements that are crucial to good portraiture: contrast, light direction, shadow placement, etc.

For example, here are two exposures of my subject, Kim, on a recent photo-shoot in Portland, Maine with no supplemental lighting. In the image below on the left, I had my camera set to expose for Kim, but in doing so, the cobblestones behind her became completely blown out. When I adjusted the exposure to maintain detail in the cobblestones, Kim became underexposed. And notice how in both cases, the bounce fill from the cobblestones provided an underlit effect to Kim's face, creating an unflattering look. 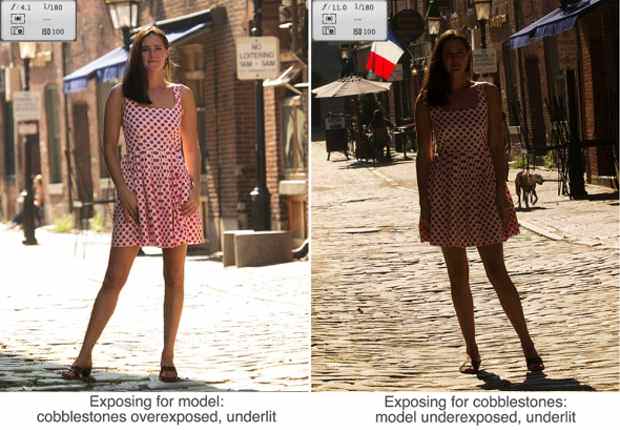 The Powered Fill
This is one of those situations where supplemental lighting can make a dramatic difference with portraits. And it does not have to be complicated. Here, my assistant, Cameron, held up a Photoflex® TRITONFLASH® Kit using a basic LiteReach®*. The flash head was set to 50% output and powered by the small lithium-ion battery pack, which Cameron had slung over his shoulder. With the sun back-lighting the scene, I had Cameron hold the light up to serve as a powered fill.

*NOTE: You can extend your lights even further with the new LiteReach® Plus.

Here is a side-by-side look at what the TRITONFLASH® Kit provided. Note that the exposure settings in the camera were the same for each shot.

Fine-Tuned Positioning
In reviewing the results, I saw that I needed to adjust both Kim's position and the light angle. Where she had been standing, Kim was in full shadow and not being backlit by the sun, and the shadow at the bottom of the frame was distracting, so I had her step back a few feet into the sun. The shadows cast across Kim's face were too deep, so I had Cameron angle the light in toward camera left. After reframing the image, I asked Kim for a few poses as I shot. Here is one from that series.

Here, the lighting was dynamic and balanced and I could envision this scene being lit naturally by sunlight bouncing off of nearby shop windows.

Softer Light Coming in Tight
With the full-length shots done, I moved in closer for some head-and-shoulder shots. Cameron powered down to 1/4 power and came in tight on Kim. Though we had an extra small OctoDome® attached to the head, the quality of light became more diffused at this close distance. Remember, the closer the light, the larger it becomes. And the larger the light, the softer it is.

After a few test shots to ensure minimal shadows cast from the nose, cheeks and jawline, I took some more shots. Here is one from that series.

When I look at this shot, I like that my attention goes directly to Kim's expression, rather than what is happening with the lighting.

Thinking along these lines, I decided to convert the series to back and white. I also added a subtle vignette and some grain for a grittier, slightly vintage feel.

Portability
All in all, it was a pretty quick shoot. Because of the portability of the lighting equipment, I was able to pack everything in my Lowepro® Pro Trekker 400 AW backpack and still have room for more. In fact, I can easily pack three TRITONFLASH® heads and batteries, along with my camera gear with no problem.

Lighting gear that is portable, well designed and lightweight makes my job not only easier, but more fun!