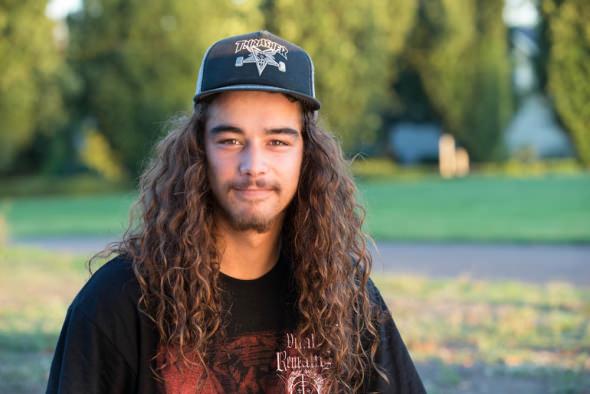 Portland, Oregon photographer Bryce Kanights has been a professional action sports photographer for the past 25 years. His work primarily involves action photography and environmental portraiture. With this shoot, he set out to capture few portraits of Cody Lockwood, a rising and popular amateur skateboarder, also from Portland. (The non-exclusive and intended use for these images of him includes an editorial piece featuring him in both print and online.) He used some portable lighting gear to make the shots more dynamic.

Gear Check
Photoflex’s TRITONFLASH is very quick to set up and its ease of use and fast recycling times while shooting on location are paramount for me. This flash’s relatively lightweight construction and smaller size is very beneficial to my work outdoors as well. The body and its lithium-ion battery pack and cables easily fit within my camera bag, alongside my cameras and assorted lenses, and the accompanying 7-inch reflector attaches to my bag with external straps without any problems. Less gear bags amount to less hassle.

Additionally, Photoflex’s 39”x39” LitePanel and LiteReach Plus boom were also instrumental for this shoot. I used the LitePanel Accessory Carry Bag to transport the gear, along with my LiteStands. So with just two bags out on location, this simplification made for a great evening shoot with a quick set-up.

Objectives
My main intent for this shoot was to utilize the new Photoflex 72” white shoot-through umbrella by illuminating Cody from head-to-toe. This durable yet lightweight umbrella is just one of the many compatible modifiers for the TRITONFLASH. And because of its larger size, I knew that it would properly diffuse the hard light and provide a softer fill upon Cody as planned.

I used two separate set-ups for these portraits with Cody, They were very straightforward and didn’t require the need for an assistant. The only instance where another set of hands and eyes would’ve helped was when an occasional loose skateboard would roll onto our set from inexperienced users of the skatepark behind us.

First Series
For the first series of shots, I positioned the TRITONFLASH at camera-left with close to a 45-degree angle from where he was standing. I metered the ambient sunlight to Cody’s back and also the reflected light bouncing off of the concrete in front of him. Then I photographed Cody standing in front of the skatepark illuminated and backlit only by the available sunlight. My camera was set to the following:

Next, I made use of my wireless slaves to remotely trigger the TRITONFLASH and introduce fill light without any modifiers. After I’d adjusted and metered the fill light, I photographed Cody in the same position and illuminated him with the flash at 1/2 power, and narrowed the aperture to f/8.

Finally, I connected the 72” white shoot-through umbrella to the TRITONFLASH and photographed him in the same position at full power, yet diffusing the light and illuminating him from head to toe. My camera settings remained at 1/250th of a second at f/8.

Second Series
For the second set-up, I used a Translucent LitePanel with LitePanel Hardware and the LiteReach Plus attached as an improvised support. With the light starting to fade, I was happy that I’d configured this setup beforehand.

As the other skateboarders at the skatepark rolled around behind us, and the sun was quickly setting in the distance, I placed my LitePanel rig in front of Cody sitting on his skateboard. He was front-lit only by the bright and quickly setting sun.

For comparison, I shot a few frames of Cody without the use of the LItePanel, and then again to demonstrate how the LitePanel suitably diffused the beaming sunlight.

This shoot confirms the notion that shooting on location with minimal, yet very functional lighting equipment can yield highly desired results. Indeed, for occasions like this, less is more!

Written and photographed by Bryce Kanights