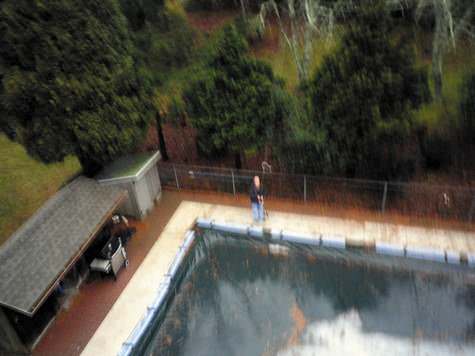 A tree crew uncovered an unusual sight Wednesday, a camera that apparently fell right out of the sky.

The rusted camera was holstered in a homemade metal contraption and tangled in a tree.

The homeowners in Preston, Ohio, were concerned at first, until they were able to remove the memory card from the rusty Pentax Optio H90 and saw the ariel images inside, one that showed a man next to a swimming pool, holding onto a string that lead right up to the camera.

Less than 24 hours later, that man was able to reclaim his camera after seeing an article in the local newspaper. Darren Wood, 43, was flying a 7-foot kite in January, 2012, with the camera attached in a homemade rigging. That's when the line broke, and the kite initially tangled itself in a nearby tree. When Wood returned to try and retrieve the kit and camera, the entire unit was gone.

Since the incident, Wood has been able to improve his ariel photography skills—including a new, sturdier rigging.

The camera was rusted and missing the batteries, but the SD card still held 77 images that were unharmed.

Hillary Grigonis is a freelance writer and photographer that got her start at a small town newspaper. Follow her on (www.facebook.com/hillarykgrigonis ) Facebook or (https://plus.google.com/u/0/+HillaryGrigonis/?rel=author ) Google+ or learn more at www.pixelpressandphoto.com.