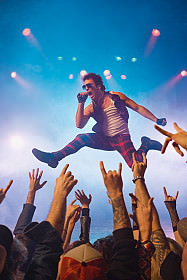 Digital photography of your favorite bands or musical performers would certainly be exciting additions to your portfolio; however, there are also a number of challenges to take the best pictures possible. This two-part PhotographyTalk.com article could help you overcome some of those challenges. Part 1 will explain what to expect when shooting a live music concert. Part 2 focuses on how to use your camera during a concert to capture the most dramatic and colorful digital images.

The Authority to Shoot

You’ll be one of two types of photographers at a concert: an audience member probably with a point-and-shoot camera or a photojournalist with a DSLR camera, multiple lenses and, most importantly, a press pass.

It’s easy to be an audience member: just buy a ticket. Clearly, you’ll be limited to the kind of digital photos you can shoot. Security won’t let you close to the stage and your compact camera won’t allow you to zoom tightly on performers, change lenses, control exposure, etc.

Audience members may not be allowed to bring professional-grade digital photography equipment into certain entertainment venues or during the appearance of certain artists. In other words, you’re gambling your DSLR camera and your camera bag of multiple lenses won’t be confiscated at the door and not returned to you until after the show.

The possible exception to these security measures is shooting in a club or at an outdoor concert. Bands playing small rooms may welcome the fact you are taking pictures that they could use in their promotional efforts. A press pass is probably not required, but it’s a good idea to talk with the band members or manager that you want to photograph the performance.

Typically, only professional photographers that can prove they are representing a publication or other medium will obtain press passes to major shows by major artists in the biggest concert halls. Accredited professionals may be given access to the area directly in front of the stage cordoned by security, the stage wings and/or the backstage area and dressing rooms. Professionals know how to take the digital photos they need without disturbing the band, security and the audience. That is an essential skill for any concert photographers, especially if they expect to be allowed to shoot there again.

It’s all a matter of experience and you can start to gain that experience by taking digital photography of local artists and individuals who’ll allow amateurs to do so. Many big concerts and festivals are semi-chaotic, raucous environments where you must protect your equipment as well as thrust it into the action to record the fantastic atmosphere. It’s best to learn how to do that at smaller, more controlled venues.

Once you have some pictures, check with local music publications and Web sites about how to submit photos to them. Tell the editors that you’re just starting to shoot concerts and you would appreciate some feedback about your early results and some pointers on how to improve. You may have to be willing to submit some free photos before they designate you as an official photographer that is eligible for press passes to bigger shows.

Another essential skill of the professional that you should develop is creativity with speed. Shooting music concerts is a form of photojournalism, which means the dramatic, exciting pictures you hope to capture will probably only happen once. You must be ready for them and move and shoot fast. This is especially true in a large music hall, with a wide stage front and stairs to the wings on both sides of the stage.