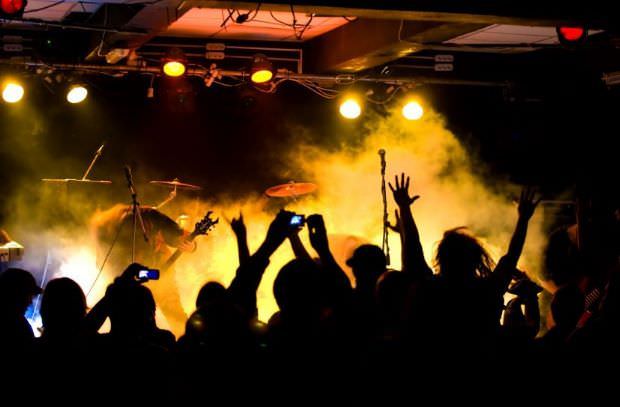 Besides their obvious appeal, concerts can be great opportunities for photography. If you think about it, you have a stage that’s set to look good, you have spectacular lights, you have performers who can be unpredictable and do cool stuff on the stage, and you have the crowd. In other words, you’ve got a bunch of ingredients to come up with some good shots.

Before we share our tips for getting these good shoots, it’s important to note that proper research is necessary before every concert. Make sure you are allowed to take camera gear at the venue. The last thing you want is to be turned around at the door, after probably paying an expensive ticket.

Exposure at a concert can be difficult. Let’s talk about the worst case scenario to get you prepared. The worst case scenario is certainly not an outdoor concert that takes place at noon when there is enough light to use ISO 100. It’s something more like a dark club or a stadium at night, with totally unpredictable light of all colors. The first thing you need to have in mind is your position. Are you close enough to use flash or not? If you are, good for you and we recommend using slow sync for visual impact. But if you aren’t, the most likely situation, the first thing you have to do is boost the ISO. But be careful about that too, because the light intensity will vary throughout the show. Settle for a value that will allow you to make minor adjustments by changing the shutter speed. You will need a fast lens, at least f2.8. Anything else might not be worth carrying the camera.

You can capture interesting images by using the crowd’s movement and the light transitions. Set a shutter speed of 1/25 or 1/20s and have some fun with hand held long exposures. Don’t look for tack sharp details because you won’t get them, but you might end up with some very nice visual effects.

I’ve seen great photos of silhouettes taken at concerts. They often carry the power of the emotion that was felt over there. Set your exposure for the stage lights and your focus on a silhouette. It’s might not be a full body figure, but it could be a few arms waving in the air, holding some lighters.

Many concerts have lasers as part of the light show. You will need a shutter speed of 1/50-1/80s and you might want to close the aperture with a step or two. Follow the movements and figure out the patter. That way you will be able to anticipate when the lasers will be in the best looking position.

As mentioned before, an f2.8 lens is important, but you could do better. The trusty 50mm f1.8 shouldn’t be missing from anyone’s kit and a concert is the kind of situation that will make it shine. Also don’t keep just one lens mounted the entire night. Try different ones, from wide angle to telezoom and remember that there are subjects all around you, not just on the stage. Good luck!