Why I’m So Happy I Found My Green Mac Repair…For Me and You! 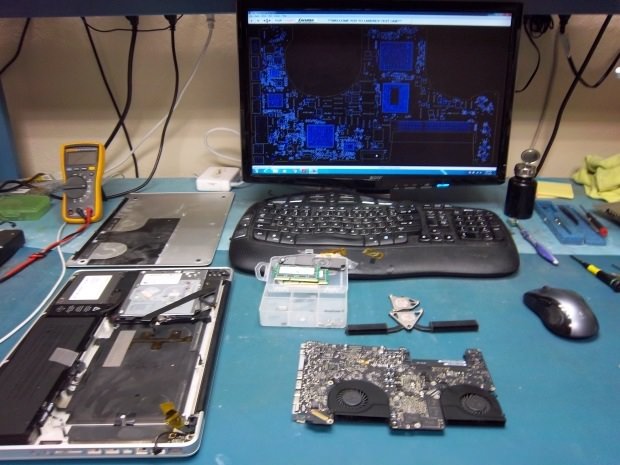 I don’t know if there is any firm, hard evidence, but photographers, both amateurs and professionals, seem to prefer Apple computers to PCs. If you rely on an Apple product to be a major component of your photography gear, then you have likely or will likely experience the same problem I recently did.

As you might imagine, managing PhotographyTalk requires not only a great amount of my time, but also multiple computer platforms to direct my team’s efforts and remain connected with members, vendors and much of the world of photography. Just like you, I can’t afford to be without any of my computers, especially my Apple computers.

My late 2012 MacBook Pro had intermittent video issues shortly after I bought it. Apple’s support advice was just to restart the computer and the video would be fine. That fix worked for a time. Wouldn’t you know, restarting the MacBook Pro no longer fixed the video problem after the warranty expired. As much as I like my Apple devices and believe the company makes superior products and the people there do great work, Apple would only address the issue for a substantial price.

I wouldn’t be surprised if this scenario seems familiar to you. You need your Apple computer, but the thought of spending big bucks for repairs from Apple or replacing the computer makes you sick.

I thought there had to be an alternative to either of these expensive choices. I decided to see if I could find an independent Mac repair company with a Google search. Of course, it listed thousands of companies that claim to be the best at repairing Apple computers. As I do whenever I need to contract for a service, I start dialing telephone numbers and interviewing companies, trying to determine who would solve the video problem with my computer – and at a reasonable cost and a quick turnaround time.

I must have called and spoken to 9 different companies listed on the first page of the Google search results for “MacBook repair.” I became frustrated and felt I was spending too much time finding a company I could trust. It wasn’t until I called My Green Mac Repair and spoke with Tracey that I actually felt comfortable. Not only was she very polite, but also she gave me a warm sense of security that I just didn’t feel when I had spoken with all the other Mac repair service companies.

I was happy to hear that Tracey and her husband, Jeff, were entrepreneurs like me, operating their family business since 2008. What impressed me the most, however, was why they started their company and the clever and affordable solution they offered for Apple computer owners.

Jeff had been an electronics and computer engineer for a large Fortune 500 company in California’s Silicon Valley. His school-age daughter had occasional MacBook problems (which may have given her an excuse not to do her homework). Her computer’s warranty had expired, like mine and maybe yours, and when Jeff saw the repair bill, he realized there needed to a better, more affordable solution. This was the catalyst for starting MyGreenMacRepair.com.

Jeff and Tracey used the word “green” in the name of their company because they believe their solution for Apple computer repairs is more “green” than the only two choices Apple offers: buy a new computer or replace the logic board, which can cost almost as much as a new computer.

Their solution, which is quite clever and elegant, is to replace just the damaged components on the existing logic board. Jeff calculates that his repair solution costs 50% to 80% less than buying a new computer or having Apple replace the entire logic board.

After carefully considering all the options the companies I contacted offered, I decided to go with Mygreenmacrepair.com. Honestly…after that one telephone conversation with Tracey, I felt like I knew these people and that they would treat my computer as if it were their own. Jeff and Tracey convinced me that they care about their customer relationships, where other companies only saw a dollar sign.

After shipping them my computer, it was only 5 days before it was returned. Throughout the repair process, they sent me regular updates. When I received my MacBook Pro, it was clean and working like new. I couldn’t be happier.

The moral of this article is that we all have computer problems; they’re almost unavoidable. Finding a quality Apple service vendor you can trust shouldn’t be so difficult. Unfortunately, there are so many and you can’t be sure of the quality of their service, even from their Websites and a telephone conversation. Tracey, however, knew exactly what to say to make me feel comfortable. I’m happy to say Mygreenmacrepair.com was my choice and is the company I strongly recommend if any of your Apple computers need topnotch service after their warranties have expired!

Article and photo by Alex Schult