GoPro Hero4: A Game Changer in the World of Extreme Photo/Video

The GoPro is the camera for adventurous and creative photographers from all over the world, so it's no surprise that the release of the Hero4 has been highly anticipated. And it turns out that the anticipation was well deserved. 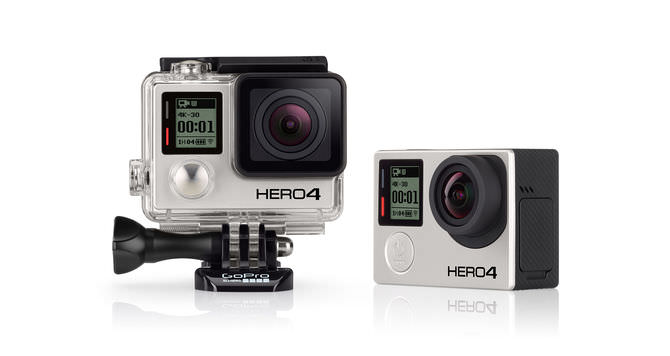 Below is what you need to know about the Hero4 Black, which is the model that's geared towards professional photographers and videographers. If you're ready to invest in a GoPro or upgrade your current model, you will not be disappointed by the company's latest offering.

The Hero4 Silver comes with a touchscreen, but because of the Black's improved processor and all of the heat it creates, the touchscreen was left off of this model.

The Hero4 Black also gives you the ability to connect your camera with your smartphone, whether you're using a Windows phone, an Android, or an iPhone. You can also connect via Bluetooth.

Yet another change that you will note on the Hero4 Black is the new battery design and size. If you already own an older GoPro model, this means you will need to purchase new batteries, which you may find an inconvenience.

But, in addition to the size of the battery being different, the location of it has changed as well. Instead of sliding it into the back of the GoPro, you now drop the battery into the bottom of the unit. Most photographers will be pleased by this upgrade because it makes changing the batteries easier.

Changing Your Settings is Easier

The GoPro Hero4 also features what's referred to as a context-sensitive menu. This is found on the right side of the camera, where you will see a Settings button that you can press to access the settings for whatever mode you're shooting in. Unlike other models, which required pressing what seemed like countless buttons to do something as simple as change your resolution or turn off a feature, this new design is easier and faster while reducing the number of mistakes that you're likely to make.

The same Settings button also works as a Highlight Tag, which allows you to tag a spot in your recording as soon as it happens so you can quickly access it and view it later on.

Night Shooting and Other Features

Other notable features include Night Lapse and Night Photo modes. These give you the ability to set your exposure for as long as 30 seconds on time-lapse and single shots.

If you like burst mode, the GoPro Hero4 Black lets you take 12-megapixel photos at up to 30 fps.

Finally, Protune gives you manual control over exposure, ISO, contrast, and color on both the photos and videos you capture.

What do you think of the new GoPro Hero4 Black? Will you be investing in it? Comment below and feel free to discuss with fellow photographers. And remember that you can join other photographers as part of the PT community by subscribing. There, you'll gain access to valuable courses, tips, contests, and more.