A while ago, I put together a list with the most expensive photographs ever sold that went viral. Usually when there is talk about this kind of subject, photographers flare up and things get bloody. Andreas Gursky, one of the most prolific artists when it comes to photography sales, has stirred up some serious debates over the years and many photographers have doubted the worth of his gigantic, minimalist photographs.

Well, whether you like Gursky or not, he's out. He's not too far away, of course. After years of dominating photography sales, he has now been sent to an honorable second place.

This change in hierarchy has gone viral and anyone spending $6,500,000 for a photo is a big deal. But what is this masterpiece of a photograph and who is the author of this amazing achievement? One thing is for sure, this picture and the photographer certainly grabbed all kinds of attention.

Let's have a look at this piece of photography history, as it is now being called. 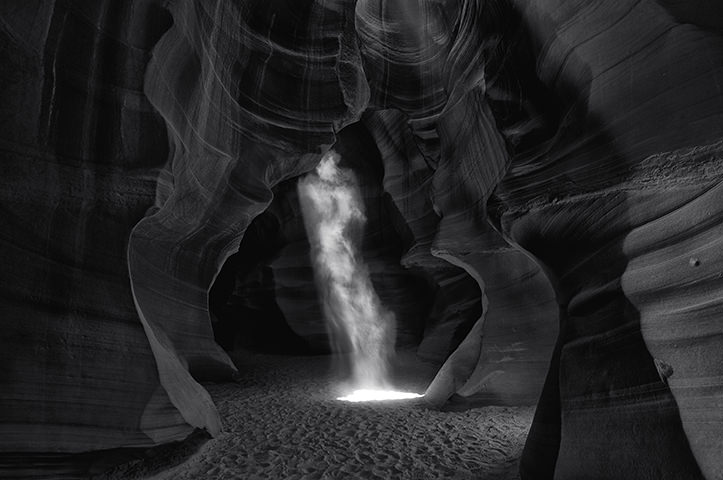 In all honesty, I don't know where to start. The photographer's name is Peter Lik. He's an Australian living in the US who looks like Crocodile Dundee, according to some.

At first glance, he is...different from what you would normally expect someone involved in the world of fine art photography to look like. It's not his choice of looks that should be judged, however, but rather the now famous photograph taken in Antelope Canyon, Arizona. The photograph was sold in Las Vegas and if you were one to interpret subtle details, you could find a connection between things.

Martin Parr, one of the most influential names in fine art photography has an interesting, optimistic view of things. His work generally sells for no more than $11,000, yet he believes this historical sale will have a positive impact: "Anything that promotes the notion that photographs are good to buy and sell is good news”.

If you look at the comments under every post that covers this sale, however, it's obvious that photographers of all levels are frustrated, to say the least. It's hard to find one person who will openly admit they truly believe the image is worth six and a half million.

The art world is cruel every day, but on some days it's just weird. Looking for explanations from someone with authority, I came across Jonathan Jones's opinion in The Guardian. He's a prominent art critic who can easily pass as someone who thinks of photography like washing cars: anyone can do it. Jones says that Phantom looks like "a posh poster you might find framed in a pretentious hotel room" and that "if this is the most valuable <fine art photograph> in history, God help fine art photography". He's also the man who believes photography is just the work of technology and so it's up to everyone to gather what they want from his sayings.

Let's be honest about this photo. I'm sure the detail is amazing in real life, but that's the doing of the Linhof Technorama camera and the format. The canyon is beautiful, but is pointing a camera at something already amazing really art?

One of two things will happen to the value of Phantom in the future. Its value will either drop dramatically once everyone, including the anonymous owner, realizes that bad jokes have a cost, but 6.5 million is too much. It's also possible that it will hold value and possibly even go a little higher on a potential second sale.

That doesn't really matter, nor does the violent criticism from countless photographers worldwide. This picture has made photography and art history and it most likely had Andreas Gursky and Cindy Sherman crying on each other's shoulders over the phone about how their world has been changed forever by a guy who looks like he just stepped out of a biker bar.

One thing I haven't told you yet, because I was saving it for the grand finale, is that he has proclaimed himself "one of the most important artists of the 21st century”.

Everybody's talking about Peter Lik these days, so you might as well visit his website and check out the rest of his portfolio.