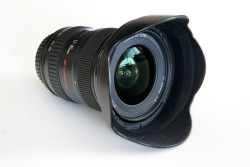 Your digital photography will be enhanced when you understand how to shoot with a wide-angle lens. It provides you with interesting ways to compose pictures, to emphasize your primary subject matter and to show more of the view in front of you. This three-part series of PhotographyTalk.com articles will explain a number of concepts related to wide-angle photography and share some tips that will help you.

A Stretched Point of View
One of the unusual elements you’ll notice as soon as you look through a wide-angle lens is that there appears to be more space between objects. The farthest objects that you could see with your normal eyesight (without the camera) have essentially disappeared. Those that were identifiable in the middle range of your vision now become much smaller and distant, rendering them virtually unrecognizable. The objects closest to you have grown in size and fill more of the frame. These distortions or the stretching of space increases as you shoot at a wider angle. Look through a fish-eye lens, which is typically the widest, and the view is almost turned on its head.

According to the science of perspective, your brain will perceive that two seemingly parallel lines moving into the distance from your position will eventually merge into a single line or point, which would then disappear beyond a certain distance.

The clearest example is standing between railroad tracks parallel and straight in front of you. Probably, somewhere in front of the horizon, they would merge into one line, and then, of course, you couldn’t see that line or point beyond the horizon line. With a wide-angle lens (approximately 35mm or less), that point where the line disappears appears to be closer to you than compared to a lens of a normal focal length (approximately 50mm), which is the equivalent of your natural vision. A wide-angle lens extends the space, so the picture it takes appears to be stretched to the farther point of disappearance of a normal lens.

Relative Size
A different example will help to explain the stretched-perspective concept further and the advantage it provides photographers. You’ve placed to puppies of the same size on the lawn, with one slightly in front of and to the side of the other; and you’re shooting digital photos at a low angle, almost lying on your stomach. Although you know that one puppy is only a foot or a few inches in front of the other, the wide-angle lens makes the farthest puppy look a half or a third of the size of the puppy in the foreground.

The photographic advantage for you is that it is easier to compose the picture if you’re goal is to highlight the puppy in the foreground. With the stretched perspective created by the wide-angle lens, the closer puppy dominates the picture, immediately drawing all eyes to it. No one should be confused about what or whom you wanted to make the primary object of your digital photos. Now, a wide-angle lens, because of its special characteristics, becomes an important compositional tool. When you place your primary subject in the foreground, you instantly create more separation between it and all other objects and its surroundings. The subject appears to be closer and all other elements appear to be farther.

This effect only works, however, when you’re close to the primary subject or object. If not, then none of the subjects or objects will appear to be the primary one. All of them will appear smaller than “normal,” and your digital photo will go from interesting to bland in a flash. Another downside of this technique is that if you aren’t close to your primary object, then some small, unimportant object that you didn’t notice in the foreground will appear to be larger and become the focal point accidentally, and thus ruining your intended photograph.

May 20, 2020
Photo Album Add-Ons That Will Impress Any Client

Offering your clients a high-quality photo album is a great idea. Offering them bespoke photo album add-ons is an even better option!