Photography Tip—How to Succeed as a Conference and Trade Show Photographer, Part 2 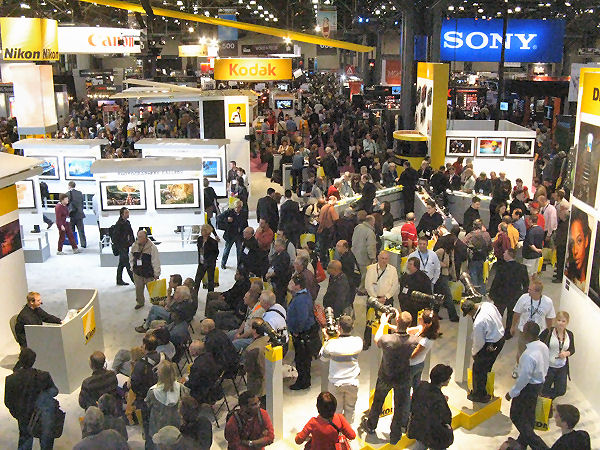 Part 2 of this PhotographyTalk.com series shares some additional tips to follow and techniques to learn if you have the opportunity to be hired as a digital photographer for a conference or trade show.

Equipment Planning.
In Part 1, a general list of equipment to consider was provided, but there are some more specifics to keep in mind.
Your optimum lens choice is a 85mm f/1.8 lens. At an ISO setting of 1600, you’ll shoot good quality images.
An option is to bring an 18–Xmm f/2.8 zoom lens, as well. It will give you wide-angle versatility, which you may need, especially in smaller rooms or spaces.
Although it won’t help you with most shots, pack your flash unit. There may be a number of poised group shots on your shooting list or other situations, such as a social gathering, where you can use it. Generally, your client won’t want you firing your flash in the middle of a seminar presentation or the speech of the keynote speaker. Again, those are specifics to list in the contract or as part of your shooting list.
A camera bag can be awkward to carry throughout a long day. You may still want to bring a bag, but leave it in a secure place. A good alternative is some kind of waist bag and a heavy belt to which you can attach lens cases.
Bring your tripod, although you may only want to use it for those poised group shots. Consider a monopod, instead, since its lighter and less cumbersome.

Do Your Homework.
To prepare the shooting list described in Part 1 of this PhotographyTalk.com series, you’ll want to ask your client for copies of all the pertinent materials and literature about the event, including its Web site.
Give yourself plenty of time to study everything to create the shooting list as well as to learn in advance a bit about the organization and some of the topics that are being presented.
Be familiar with the faces of the major players: your client and the executive committee members and the keynote speaker and other presenters. Bring the conference booklet with all their photos, so you can refer to it during the event.
Review your shooting list and the event Web site the day prior, so you’re aware of any last-minute changes to the schedule or speakers.
Make sure to compare the length of various presentations, speeches and gatherings you must photograph with the life of your batteries and the space on your memory cards. It’s best if you don’t have to switch them during those periods.

Know the Etiquette.
Although your digital photos of the conference are important to your client, at the end of the day (and beginning), you are one of a number of hired professionals and servicepersons to support the event. You’re there to do a job, which will require you to walk that fine line between fulfilling your obligation to take the pictures your client wants and making yourself almost invisible.
Scout the room before the speech or seminar begins to find the best positions to photograph the speaker, but not block or disturb the attendees.
Introduce yourself to the videographer and his crew and check that your shooting positions won’t block their work (and they won’t interfere with yours).
Your client doesn’t want to see you rapid-firing your camera in burst mode, with a succession of quick flashes from your flash unit.
You’ll have plenty of time to take the digital photos you need, so spend the first few minutes of a speech studying the gestures of the speaker and how often he or she looks at the audience. Once you understand his or her manner of speaking and cadence, you can limit your camera clicks to the right moments. Generally, if you take one photo every 10–15 seconds, then you’ll rarely be noticed or become obtrusive. It’s also a good idea to check your results between shots.

Proceed to Part 3 of this PhotographyTalk.com article for more tips and techniques to photograph conferences and trade shows.