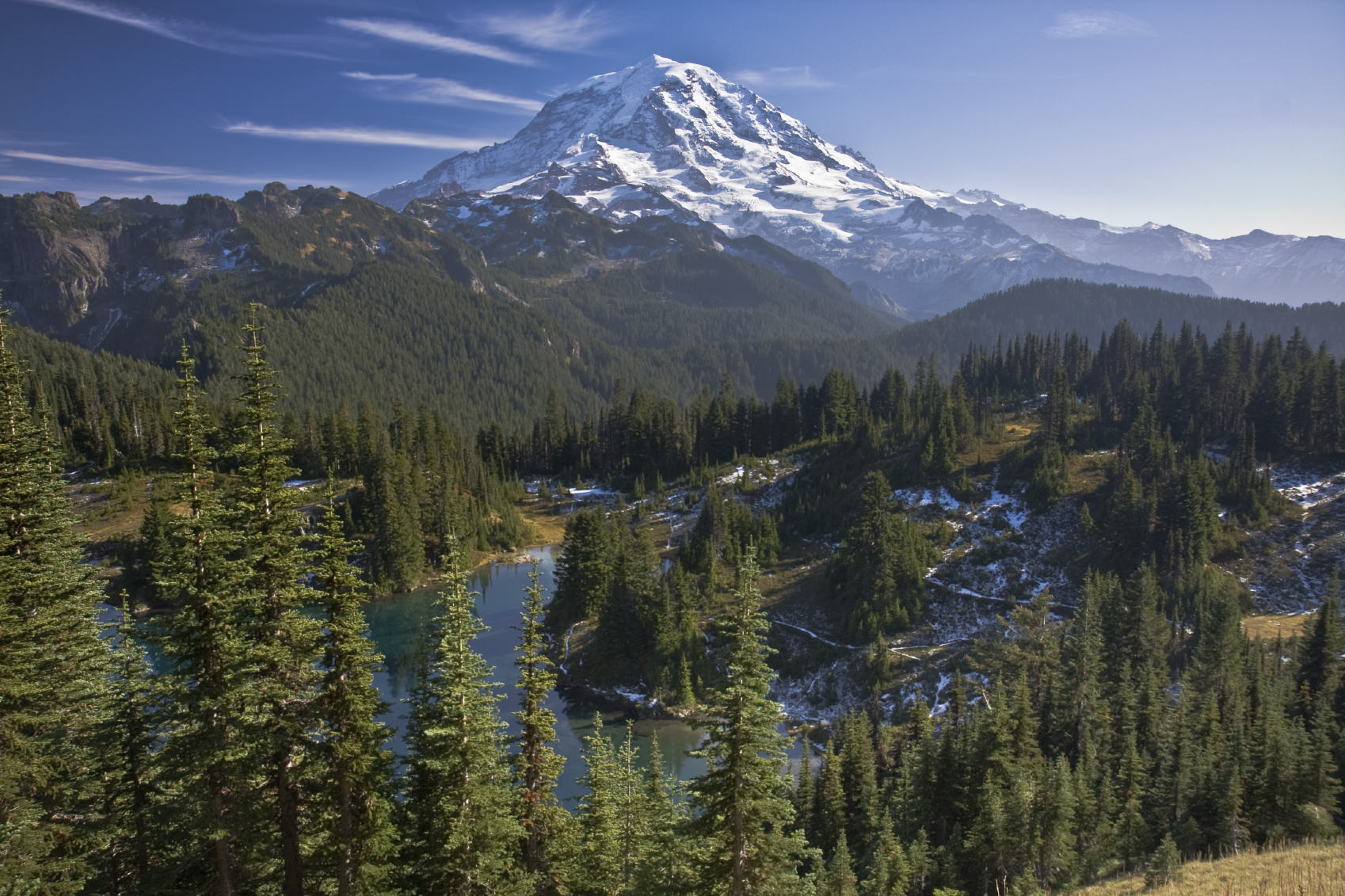 There are a lot of concepts that you need to study and understand as a beginning photographer. Composition, lighting, and camera settings, for example, all have a great deal of impact on the images you take.

One of the most important photography concepts to understand is also one of the most complex: depth of field. In short, depth of field is the range within an image that is in sharp focus. But simplistic definitions aside, there is a volume of considerations that go into determining depth of field and using it to enhance your images.

Quick Examples of Depth of Field

One of the easiest ways to illustrate the concept of depth of field is to provide examples. Look at the image below, and notice how everything in the background is blurry: 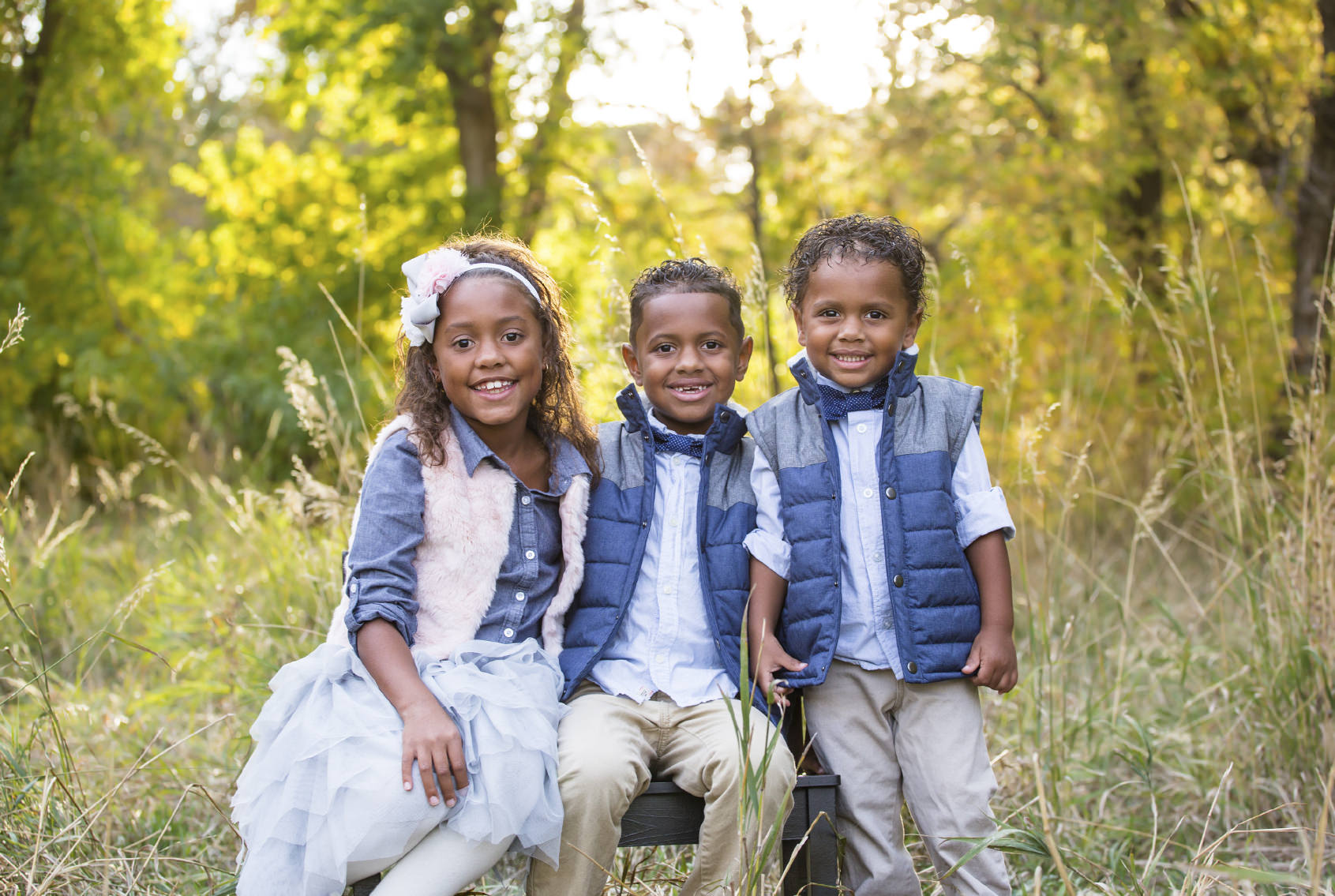 The blurry background indicates that a shallow depth of field was used. Shallow depth of field is a technique often used in portraits because it produces nice bokeh effects (the blurry circle shapes in the background created by a wide aperture) that helps draw attention to the primary subject. In this case, the three children are in very sharp focus, but with a blurred background, the attention of our eyes isn’t distracted – we maintain focus on the kids.

Conversely, landscape images tend to benefit from a large depth of field, like in this image: 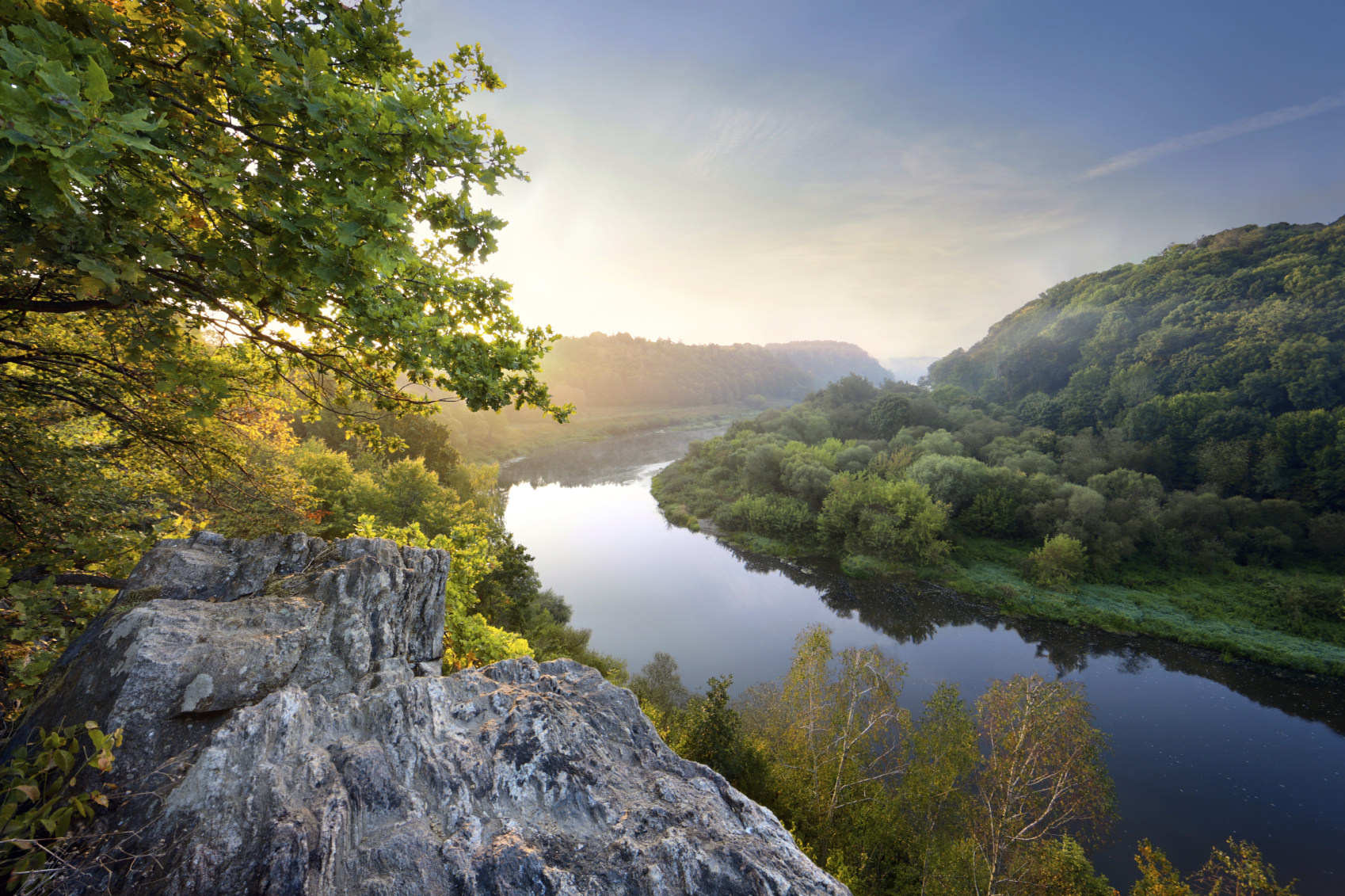 Notice how everything in the scene is in sharp focus. This helps our eyes move through the scene, from the rocks in the foreground to the river in the middle to the hills and trees in the background. A large depth of field thus facilitates greater movement of the viewer’s eye such that they can soak up all there is to see in the scene.

Depth of field is not an exact area either, in that it is a continuous range. There isn’t a line of demarcation between perfectly in focus pixels and blurry pixels – it happens gradually. Depth of field is also unevenly distributed in front of and behind the subject. The distances may vary, but a good rule of thumb is that for most situations, about one-third of the area of focus falls in front of your subject, with the other two-thirds of focus falling behind the subject. However, as the focal length increases, these distances shift more toward an equal distribution.

So, now that you’ve seen examples, it’s time to learn how to manipulate depth of field. There are several critical components that go into determining how deep or shallow depth of field will be.

Aperture is denoted using f-stops, which, for beginners is a bit confusing because f-stops are inversely related to the size of the aperture, like so: 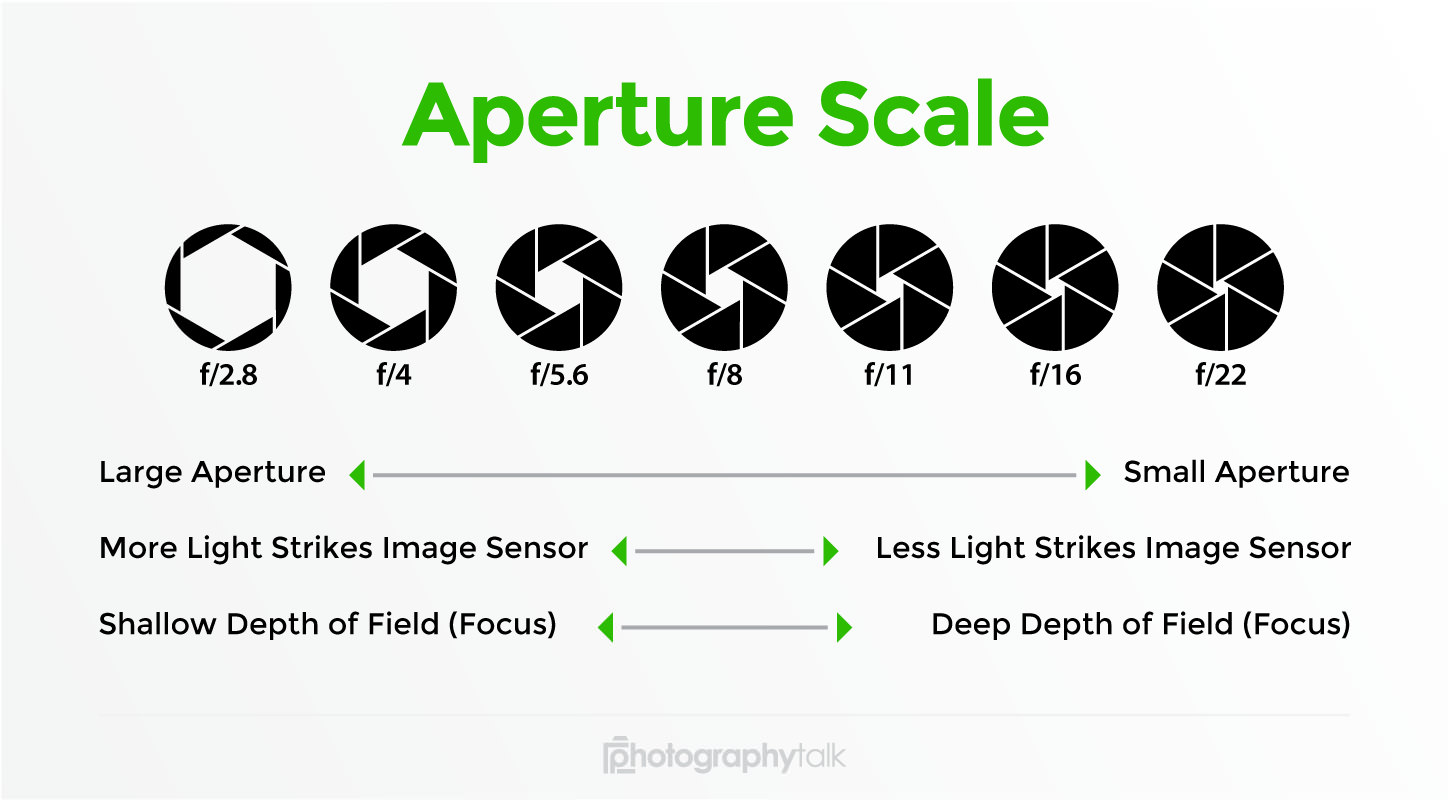 The closer your camera is to the subject, the shallower the depth of field. So, again, using portraits as an example, the photographer will generally be quite close to his or her subject, thus making it relatively easy to get a shallow depth of field. On the other hand, since landscape photography is generally done from afar to capture the expanse of the landscape, depth of field is quite deep, even if a smaller than normal aperture is used. Consider this: 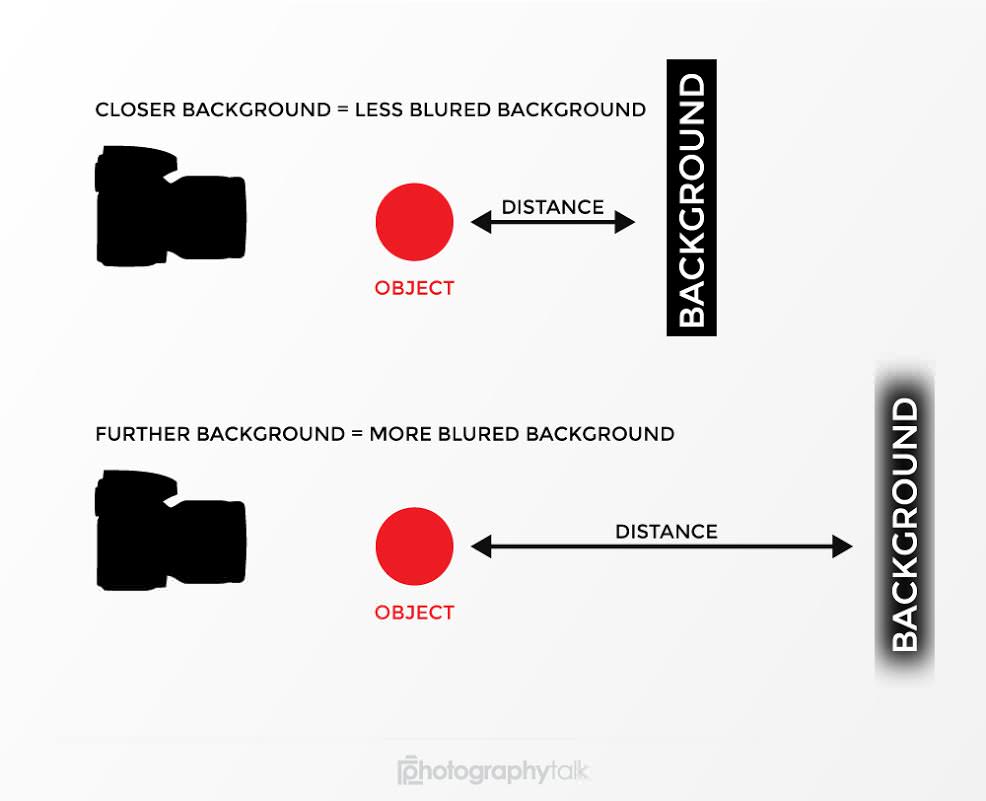 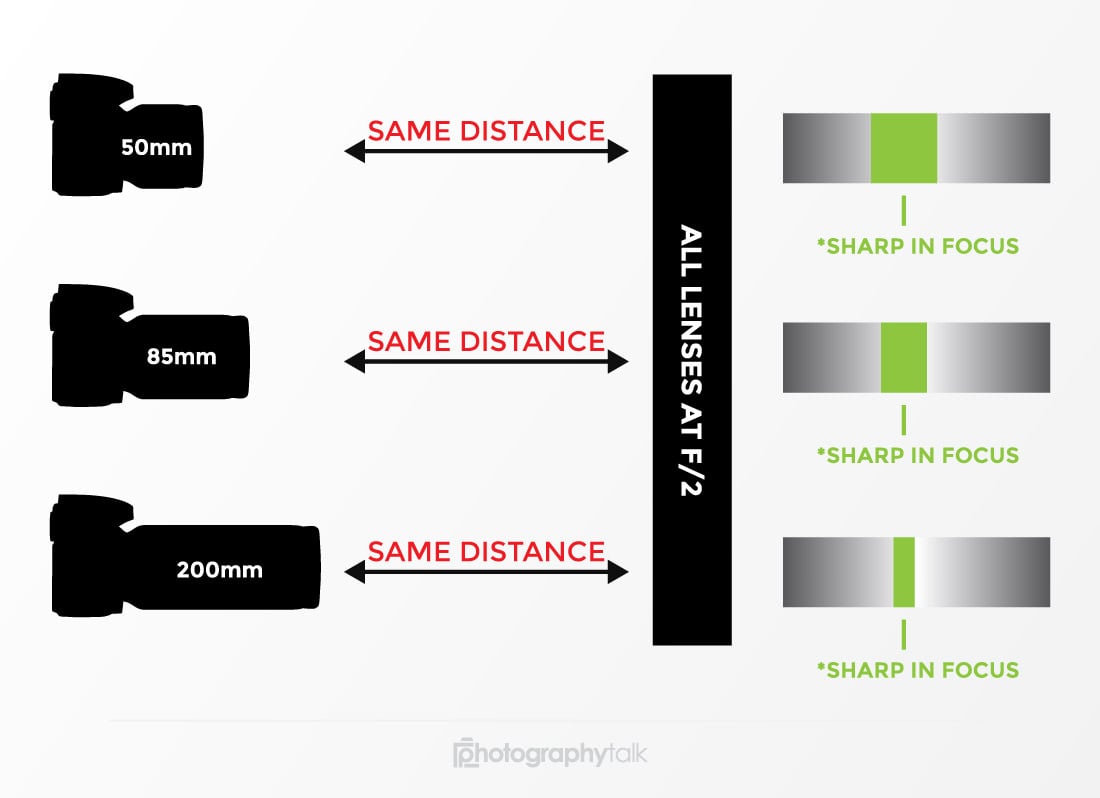 Focal length refers to the size of your camera’s lens and its ability to magnify a subject. Basically, the longer your lens, the shallower the depth of field will be.

Camera Settings for Depth of Field

For example, if you set a small aperture, say f/16, you limit the amount of light that enters your lens. Without as much light, you run the risk of underexposing your image. In other words, your image will be dark.

To compensate for this, you could slow down your shutter speed, say from 1/200 seconds to 1/50 seconds, thus giving the lens longer to collect the available light. You could also use a higher ISO setting, say, ISO 800 instead of ISO 400. Remember that ISO refers to the level of sensitivity of your camera’s sensor to light, with the higher the number indicating an increasing sensitivity to light.

However, if you’re a beginner, making all of these adjustments can be a bit overwhelming. Fortunately, many DSLRs and even point-and-shoot cameras have presets you can use to streamline the process.

Camera Presets for Depth of Field 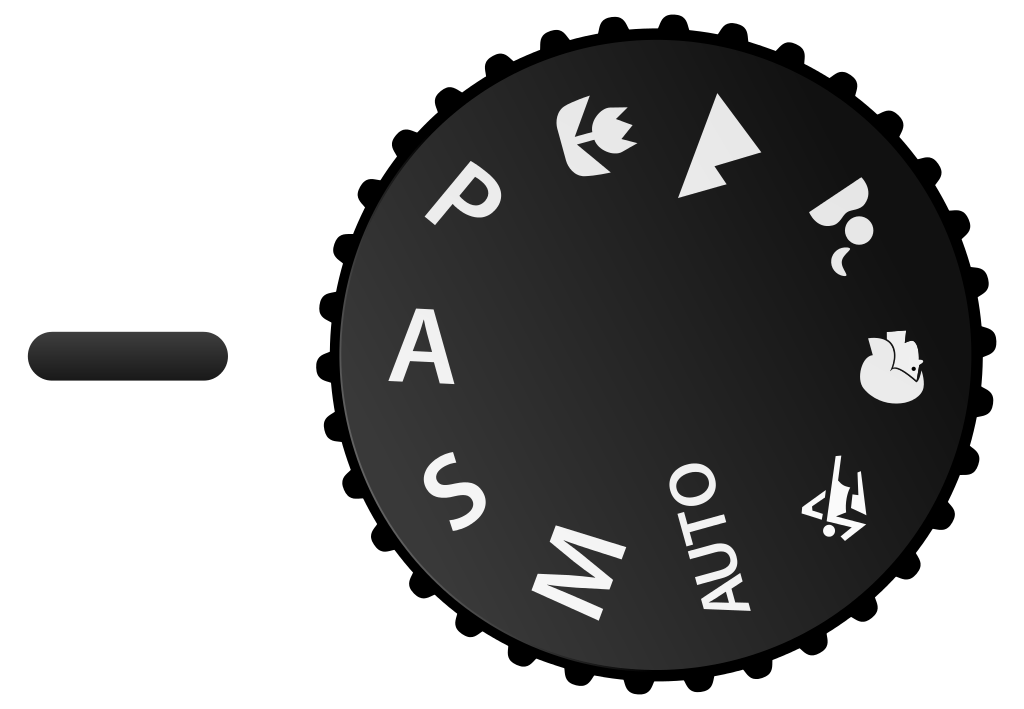 One of the simplest ways to manipulate depth of field and still get a well-exposed image is to use your camera’s Aperture Priority mode, which, depending on the manufacturer of your camera may be indicated with an A or AV on the camera mode dial.

Of course, there are limits to the ability of the camera to adjust the shutter. For example, if you’ve got a very small aperture like f/22 and there isn’t much available light, the camera might struggle to select a shutter speed that remains fast enough for you to hold your camera in your hand. For most people, shutter speeds at or below 1/30 of a second are too slow, or else camera shake ruins the picture. As a result, always have your tripod handy in case you need to slow the shutter significantly. 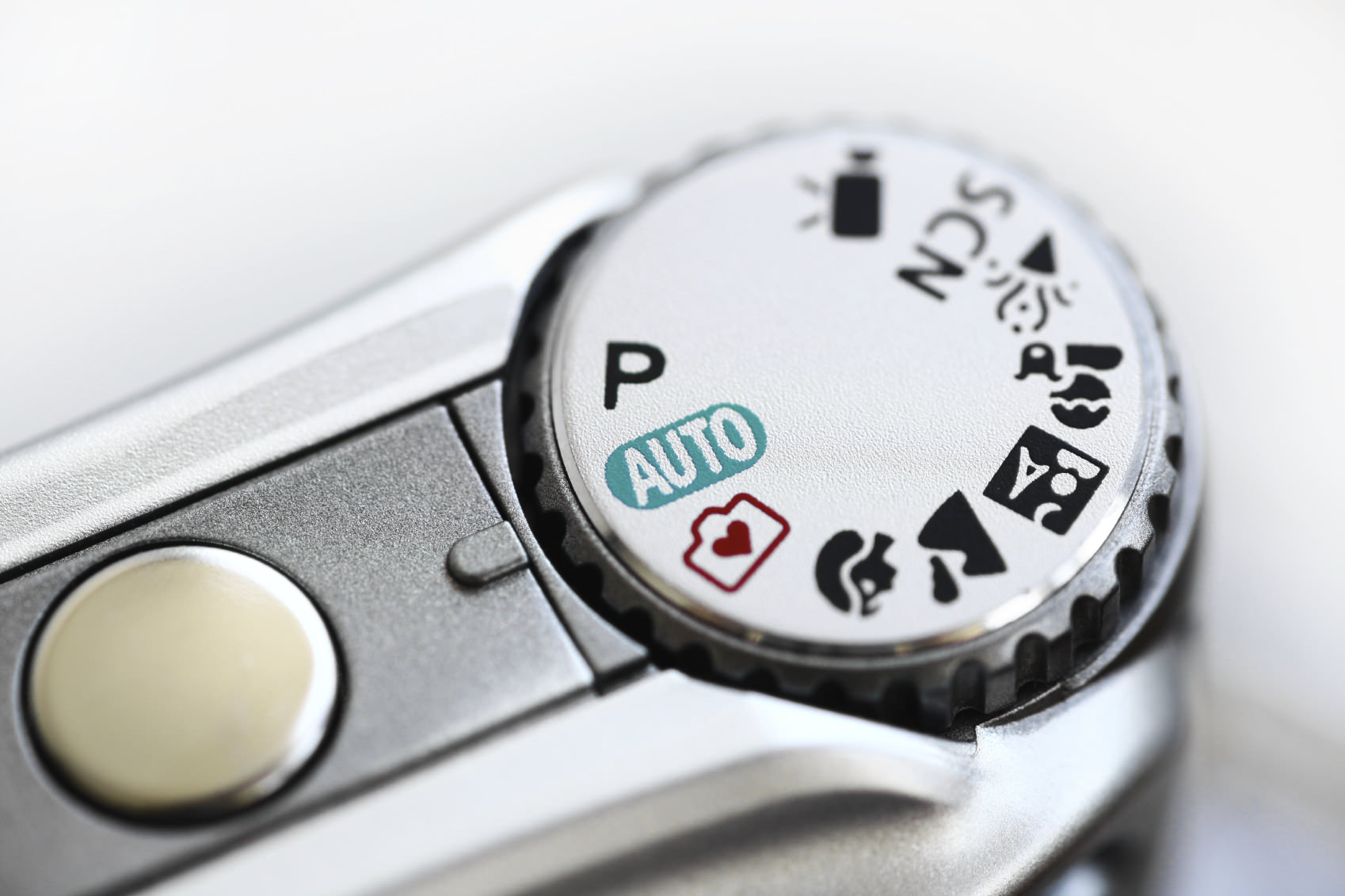 If you’ve got a point and shoot camera, don’t worry – you can still manipulate depth of field too. If you look on the mode dial on your camera, you should see a little mountain figure. Shooting in that mode – landscape – selects a narrower aperture and faster shutter speed to get you the large depth of field typically required for landscape shots. Look for the little head icon – portrait mode – and the camera will select settings more conducive to a shallow depth of field. These shooting modes are also often found on DSLRs in the shooting mode menu.

In short: Use your camera’s presets – Aperture Priority mode on a DSLR and portrait or landscape mode on a point and shoot – to control depth of field without having to make as many on-camera adjustments.

Why Depth of Field is Important

As discussed above, depth of field is a great tool for portraiture and landscape photography because in the former, you can use a shallow depth of field to separate your subject from the background, thus forcing viewers’ eyes to inspect your subject longer. In the latter, a large depth of field opens the entire photo for viewing and gives a better impression of the full landscape. 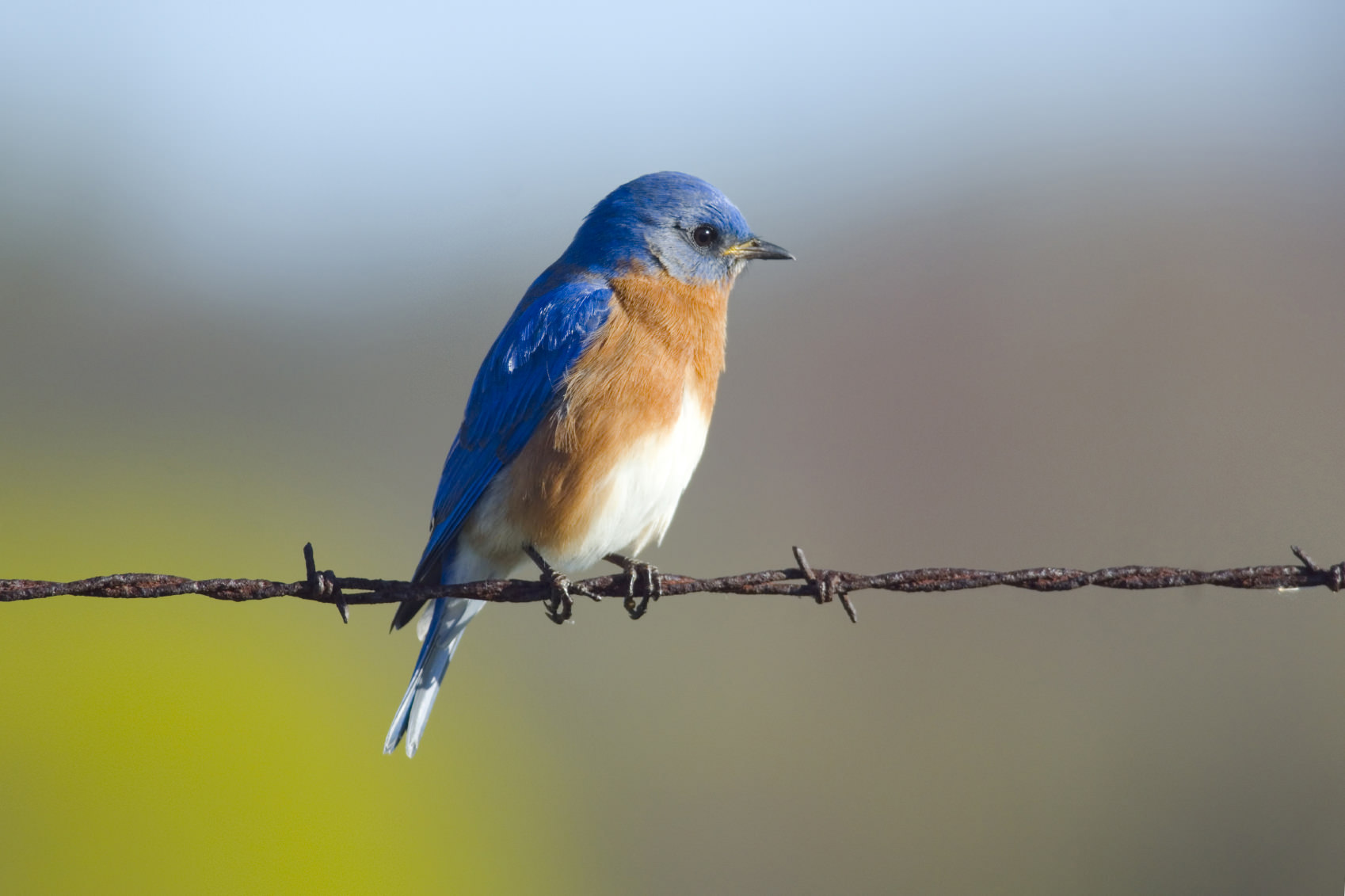 Depth of field is also useful for wildlife photography, because like portraits, it’s easier to view animals if they are separated from the background, as is the case in the image above. Sports photographs also benefit from a shallow depth of field, again, to help make the primary subject stand out from all the action that’s going on around him or her. Street photography, on the other hand, is a great place to use a large depth of field so that viewers have a good sense of the environment surrounding the primary subject. 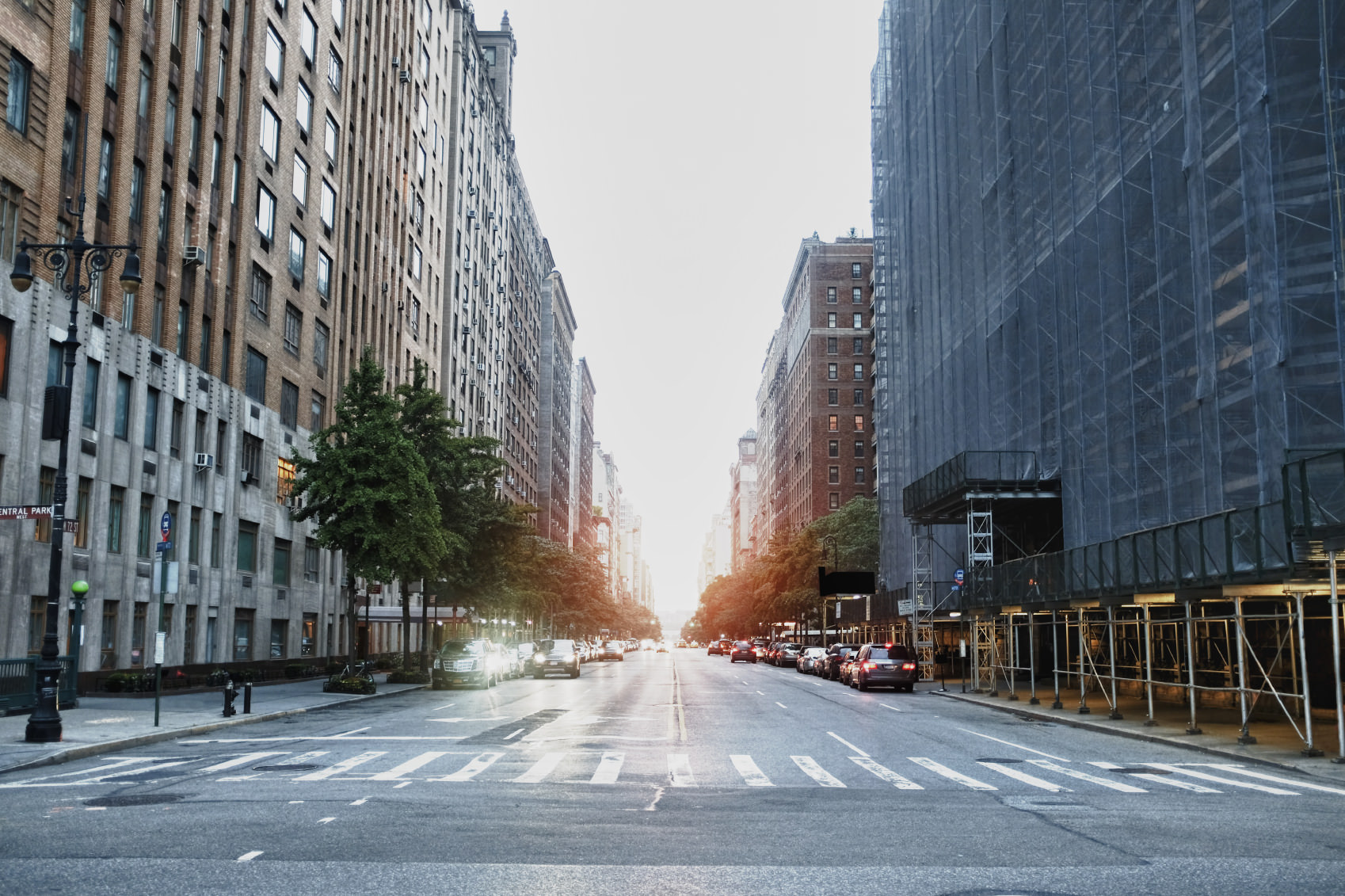 Depth of field is also an excellent tool to help you create more artistic images. Knowing how to make certain parts of an image sharp or blurry will help you better define your subjects, mask background details you don’t want to be seen, and create images that have much more mood and visual interest.

Learning how to control depth of field can be quite the undertaking, but checking depth of field is really quite simple. Try these methods to check your images for the desired focus: 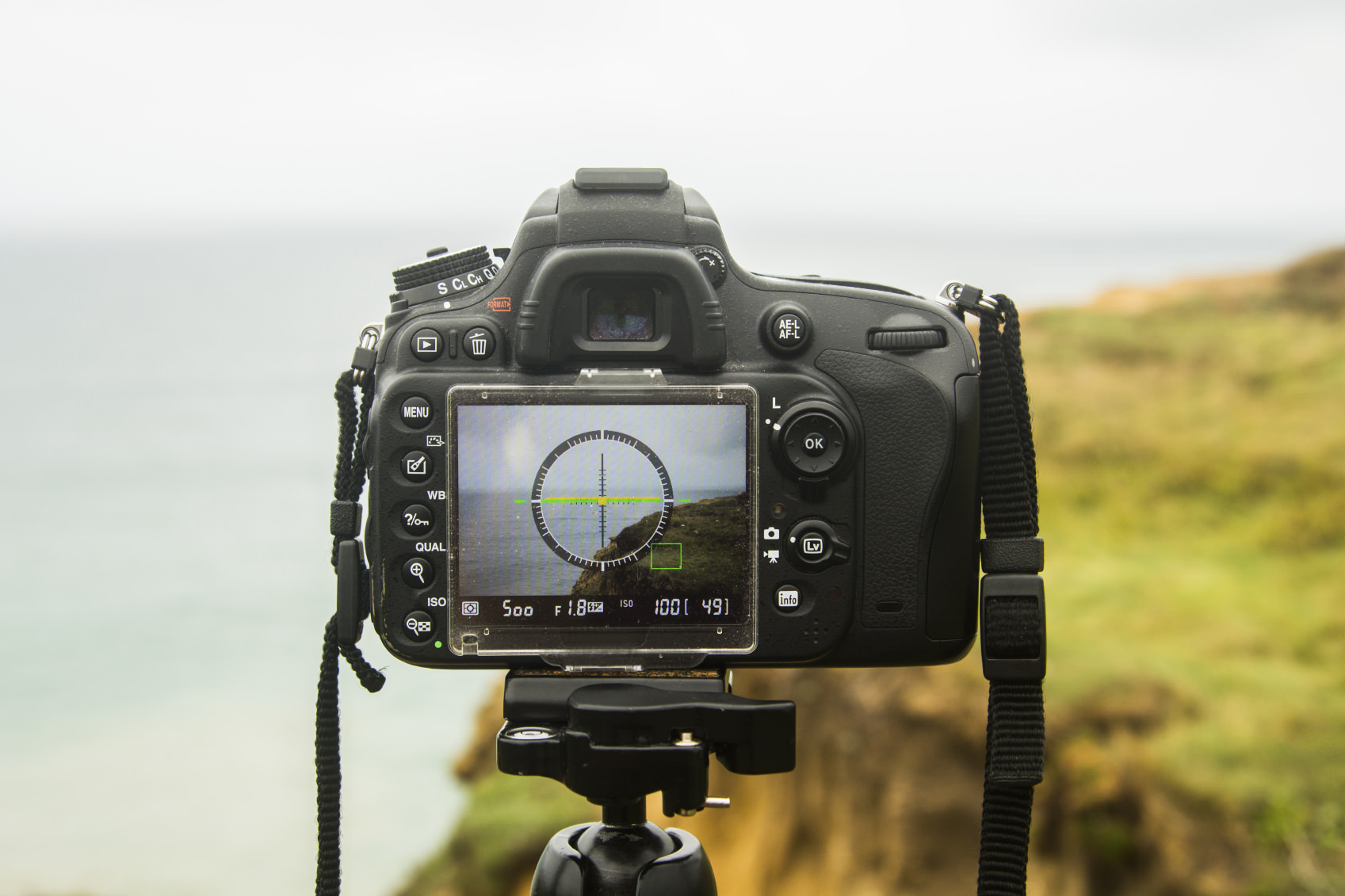 Checking your shots on your camera’s LCD will give you a much better look at your image than what you see through the viewfinder. Use the zoom function to zoom in and closely inspect various parts of the image to see what’s in focus and what isn’t.

If you’re shooting in a studio (or anywhere else where it’s convenient to have your laptop attached to your camera), you can view your images directly on your computer screen after taking them. This affords you a large, crystal-clear view of what’s happening in the image regarding depth of field. 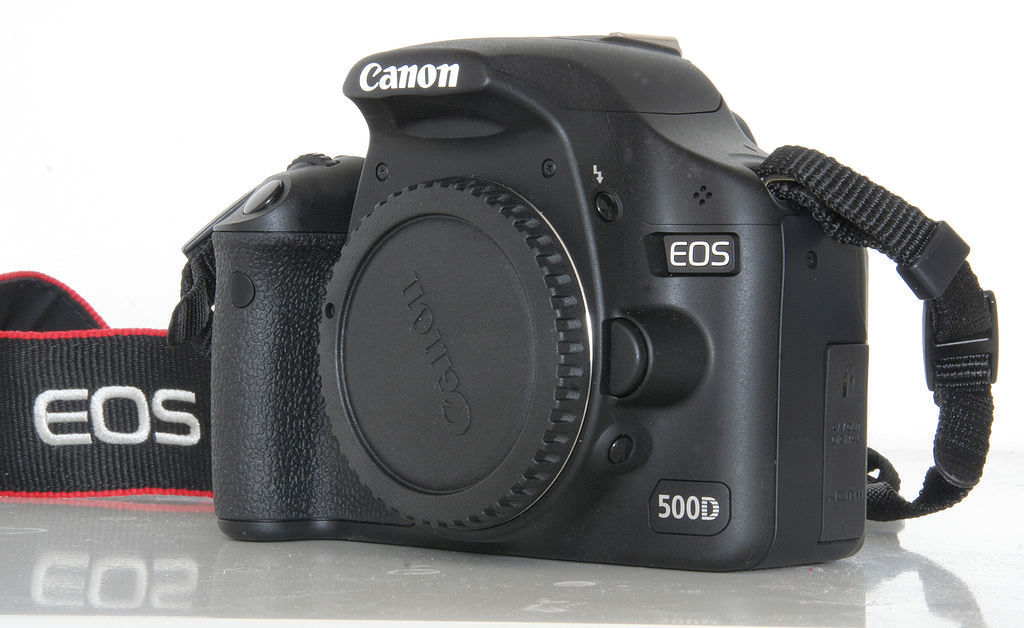 By Mauritsvink (Own work) [Public domain], via Wikimedia Commons

Taking control of depth of field will open up new possibilities for your photography. You can incorporate a nice blurry, bokeh-filled background to make your portrait subjects pop, or you can narrow your aperture to get a clean, crisp landscape image that’s sharp from foreground to background. The end result is more control over how your images look. But more than that, learning about depth of field means that you understand one of the most fundamental and crucial aspects of photography and can make more informed decisions about what you photograph and how you photograph it.