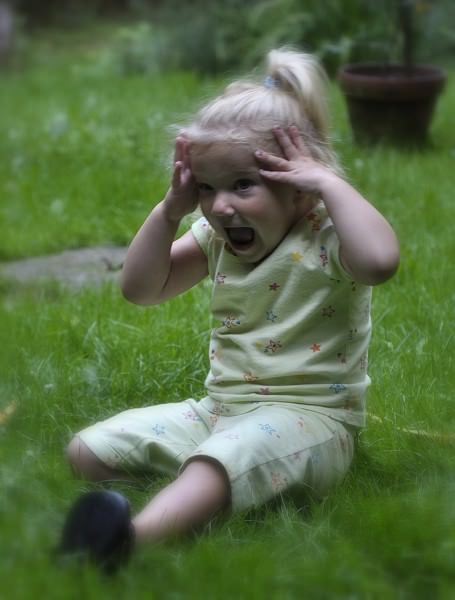 Digital photography of babies is somewhat easy, simply because they can’t move much. By the time kids are four or five, they are old enough to take some direction, even though they may still be squirming when you want to take their picture. It’s those “perpetual-motion machines” from approximately 18 months to three years of age that can often be the most difficult to photograph. Toddlers are so active that they appear to be moving in their sleep!

Try the following 5 tips to corral toddlers for that brief moment when you can capture memorable digital photos for the family photo album.

Corner the Little Critters
Whether you’re engaged in an informal family photo session or are being paid to shoot portraits of toddlers, look for the corner of two walls or create a corner and position yourself as the third side of the triangle, so they can’t easily escape. Don’t think you have all the time in the world because just as quickly as you corner them, they’ll duck between your legs. Even outside, during a picnic or vacation, you can move a few items together—beach chairs, cooler, picnic tables—to create a “holding pen.”

Disengage Their Drive Train
It’s more difficult for toddlers to move if their feet aren’t in touch with the ground. Be creative and find an object or place they are willing to sit or stand for 20 or 30 seconds, so you can shoot in continuous mode and record a few good digital photos. Toddlers are not likely to sit in a regular chair for long, but try to sit them on the wall of a flowerbed in the park, for example, that is just a bit too high for them to be able to jump to the ground. In children’s museums and amusement parks, there are many places where toddlers will idle their motors for a few minutes because it’s new, fun and exciting.

Bring a Kid Wrangler
As anyone who works with kids professionally for photo or TV commercial shoots will tell you, you must have a designated kid wrangler. He or she has the personality and maybe the experience with kids to entertain them and attract their attention, so you can concentrate on taking the digital photos their mothers will cherish.

Parents as Complementing Elements
Assuming your goal is photos of just the toddler, think of some creative ways to pose the parents as complementary components of the pictures without the session becoming a family portrait. For example, the toddler may be moving toward the camera and you shoot him or her with a narrow depth-of-field. The parents are in the distance, holding hands, but considerably out of focus. You could also shoot from the child’s level as a parent hands him or her a cookie. The parent remains standing, however, and only his or her arm and hand are visible. This is also another way to direct the child’s attention on an object of interest, giving you a few seconds to grab a number of digital images.

A Good, Loud Shout
This is not a suggestion to shout at toddlers in anger for how frustrated you become that they won’t stand still. Instead, it’s a device to startle them to look at you long enough to take their picture. Imagine you’re outside and a child is walking from you; you’re in pleasant surroundings, a park, a grove of trees or a country lane. You pre-focus a spot and when the child steps into it, you suddenly shout his or her name. This should cause an immediate reaction. He or she will turn toward you and should appear to be sharply focused on your call. That is the time to snap that shutter as many times as possible, during that moment. A shout is only effective once, maybe twice, however, before it loses all its impact. Do it continuously and the child will disregard you very quickly.

It is possible to capture excellent digital photos of toddlers, even though they are always on the run, with the tips in this PhotographyTalk.com article. Plus, it will make you a much better photographer when you learn how to corral toddlers for that special picture their mother will always love.