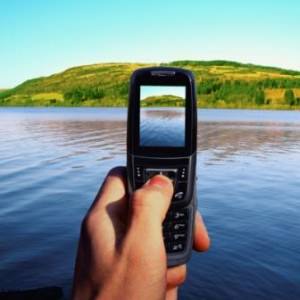 Until recently, digital photography has been limited to compact, or point-and-shoot, cameras and full-featured DSLR cameras, typically used by serious hobbyists and pros. That is quickly changing, as many people discover that the newest cell phones and smart phones have the quality and capabilities to be the only device they need: phone, camera and MP3 player. One new model already features five megapixels of resolution, auto-focus and a flash.

As cameras, the high-end devices will soon have sensors of eight megapixels or greater, capable of delivering images that rival most compacts. Those eight-megapixel models will allow you to adjust white balance, stabilize images and reduce red eye. Plus, those high-end camera phones will have various shooting modes, as you might find on a compact or DSLR, such as sports, macro, night and portraits.

The people at Strategy Analytics, an independent, global research and consulting firm, predict that worldwide sales of top-tier devices, with the best image quality, will increase by 240 percent during 2011. They also project that 2011 will be first year more than one billion camera phones of all kinds will be sold around the globe. There are even some industry experts who believe that compact cameras will disappear entirely, as camera phone quality and capabilities continue to grow.

Many people are discovering that the major advantages of camera phones, especially as their resolutions and features improve, are the opportunity to be a citizen photojournalist and their unobtrusive size. Camera phones may have limitations compared to all the equipment a professional photojournalist uses on location; but because you can place these small phones in your pocket and they work very quietly, people around the world are capturing important images that the pros often miss. It’s so much easier to take a picture with a camera phone where it may be “officially” prohibited than being denied access because you’re carrying a large DSLR with a large lens attached.

Simple Tips to Shoot Better Pictures with a Camera Phone

A camera phone’s small size can also be a negative because one-handed operations results in camera shake and blurry images. Whenever possible, hold your camera phone with two hands, so when it is at arms length to see the LCD, you’re providing a more stable base. Proper operation of the shutter release is the same on a camera phone as an expensive DSLR. Press, or release, the shutter gently; don’t stab at it with a finger. Use the pro’s technique and exhale or inhale a breath and hold it, just before releasing the shutter.

Although camera phones set exposure and focus automatically, the sensor needs more time to adjust to the light level than a standard camera. During those few extra seconds, you can make sure your scene or subject is sharply focused. You don’t have many lighting choices when shooting with a camera phone other than available light. Try to position yourself and/or your phone to shoot under the brightest light possible. Some camera phones have low-light settings that will help. Camera phones will produce good digital pictures when shooting in open shade or an overcast day, when the light is even everywhere.

Many of the smart phones offer apps that allow you to edit and enhance your photos. Since camera phone pictures are typically JPEGS, you can easily download them to your computer and use photo editing software for even more tweaking. As the evolution of personal electronic devices continues at a rapid pace, these higher quality camera phones are priced to compete with compact digital cameras. When you consider that camera phones do much more than a compact camera, the value of your purchase is even greater, and a smarter consumer choice.