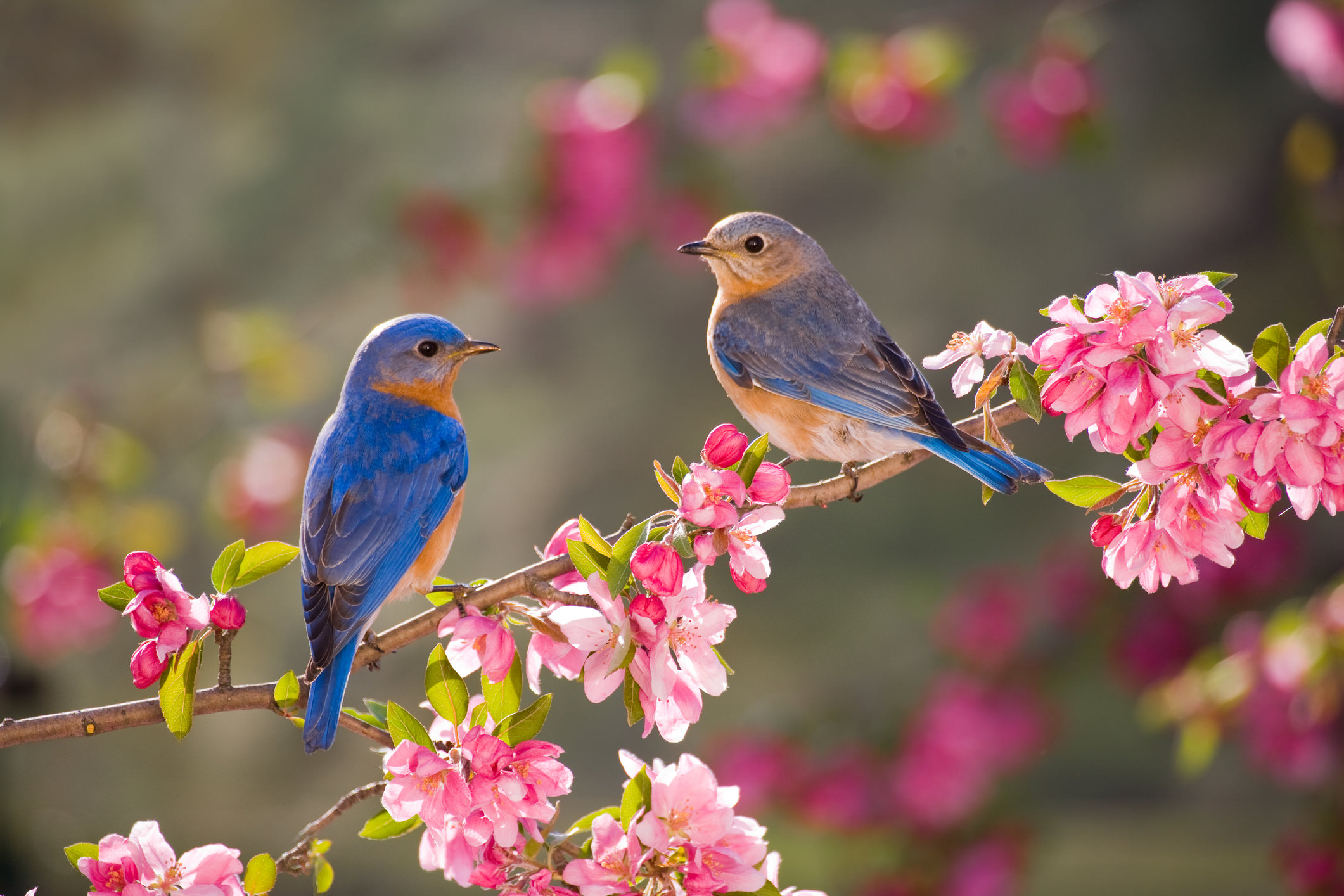 It’s the start of another week, and I’m back with a list of photos to inspire your photographic pursuits.

This go-round, I have 17 incredible wildlife photos to help you envision how to capture the beauty of the natural world around us.

In this case, each of the images has a common theme: pairs.

Ask any nature and wildlife photographer and they’ll tell you that photographing a single animal is extremely rewarding. Add another animal to the shot, and there’s all sorts of opportunities for creating a compelling photo.

Have a look, and see how you might be inspired to change your nature and wildlife photos this week for the better, and do so in a way that minimizes your mistakes. 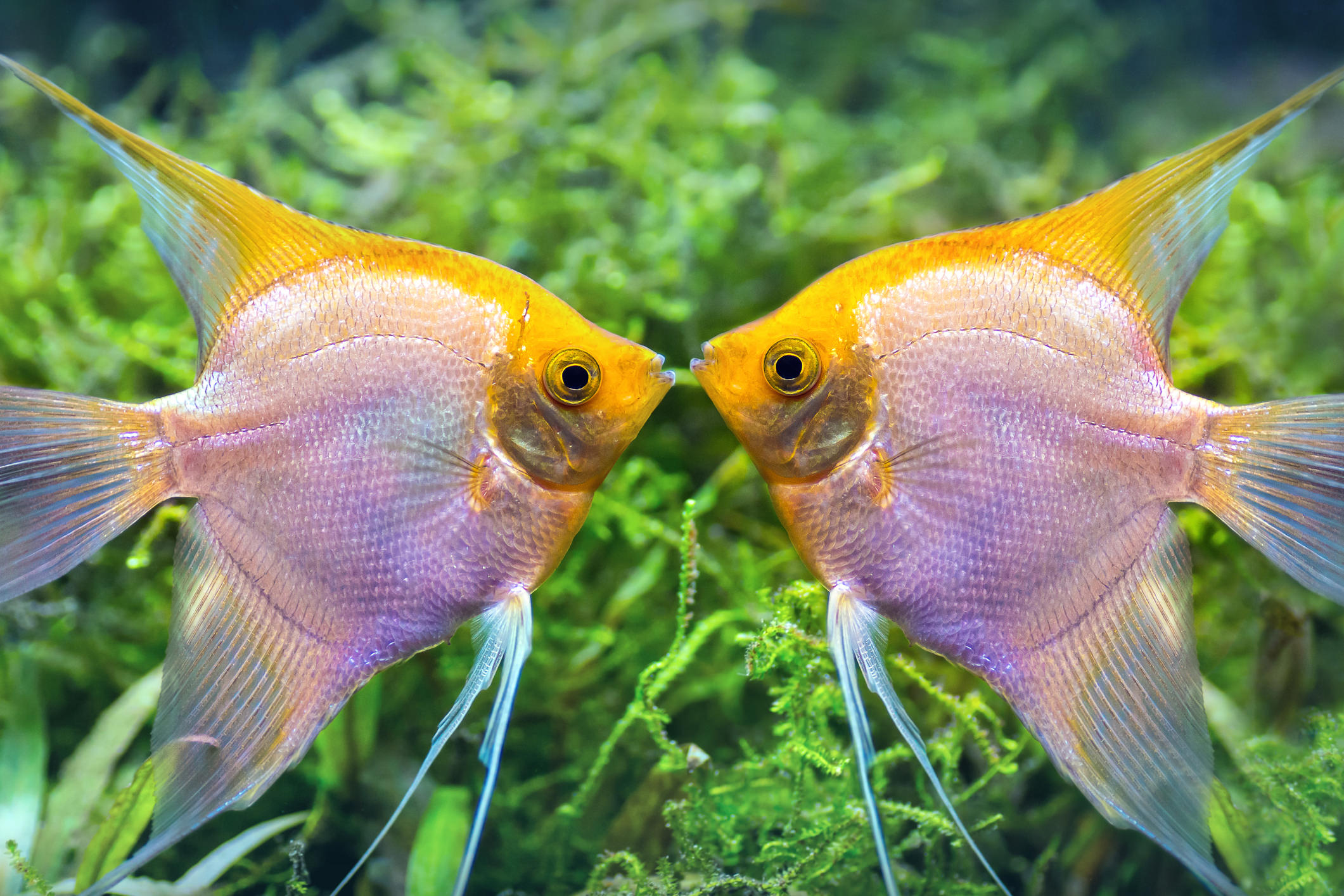 At first glance, you might think that this is a mirror image photo that was manipulated in Photoshop. But look again...you’ll notice the fish on the right is slightly higher at the mouth than the one on the left. Also notice the difference in the shape and structure of the plants in the bottom corners of the frame. The takeaway here is that this composition forced us to inspect the shot in more detail - which is one of the goals of photography, right? Mission accomplished! 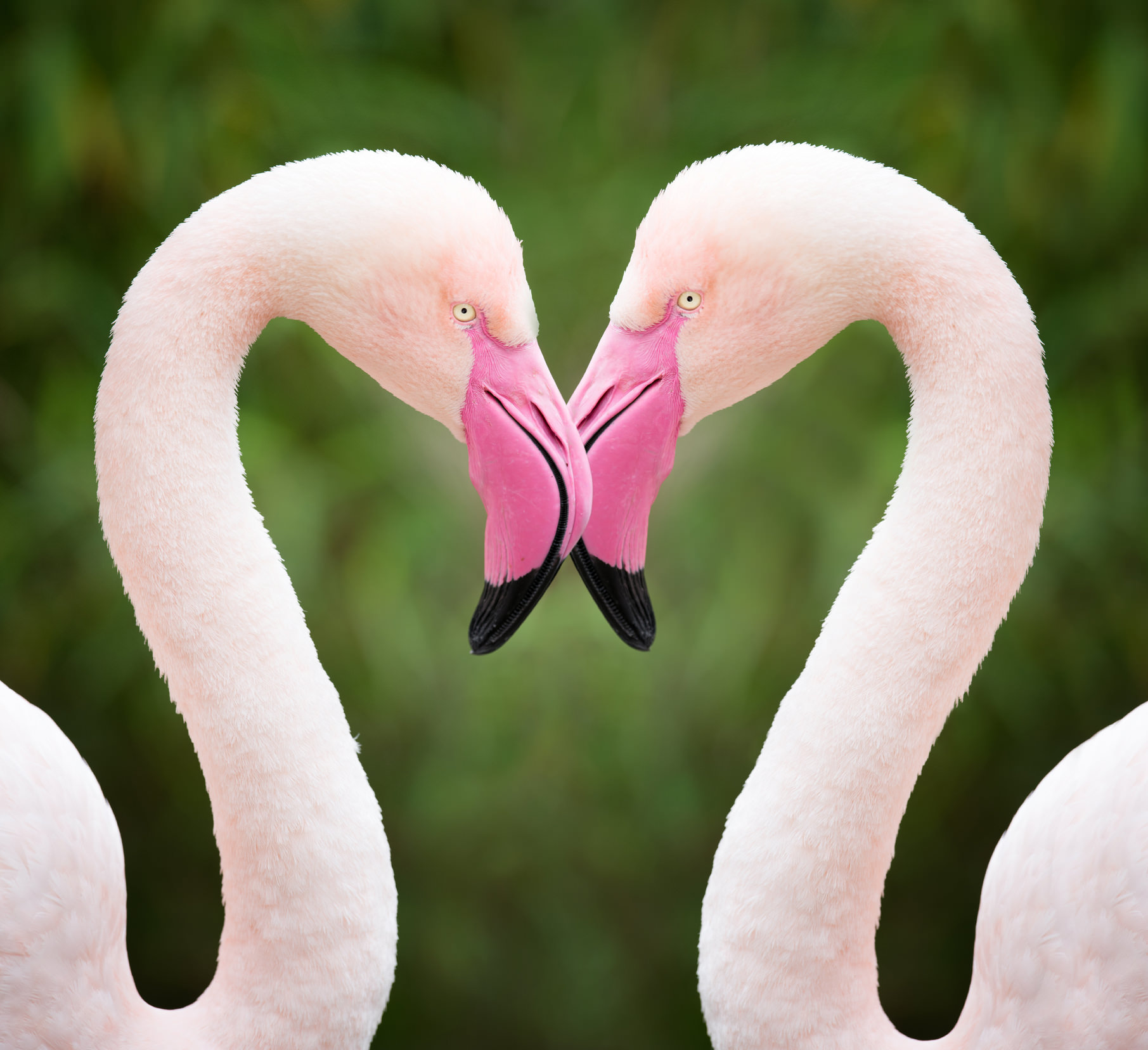 Even when photographing a pair of gorgeous animals, it’s important to look for compositional opportunities that allow you to enhance the visual interest in the shot. In this case, the heart-shaped form created by the necks and heads of the flamingo adds another layer of interest. Note as well that the eyes of the birds are absolutely tack-sharp. Just like when taking a portrait of a person, it’s necessary to keep an animal’s eyes perfectly in focus. 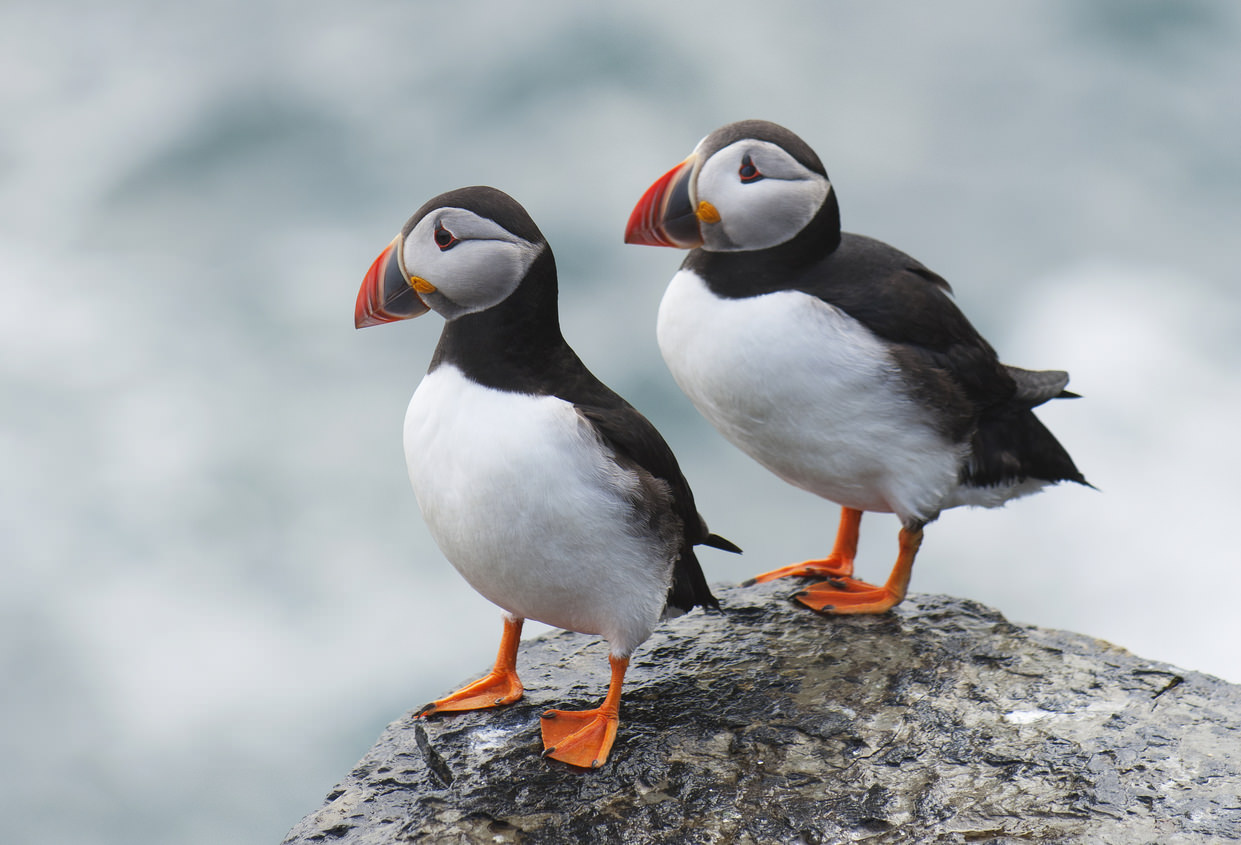 This photo is a prime example of how photographing a pair makes the shot. Imagine this photo with just a single puffin - left with the same framing, the photo wouldn’t be nearly as interesting. But with two puffins, both of which are looking in the same direction, we get a strong visual cue that expands the space of the shot. It helps that their colorful beaks and feet are set against a neutral background, which allows those color details to pop. Also note how the photographer used the appropriate camera settings to create a blurry background that helps the puffins pop even more in the shot. 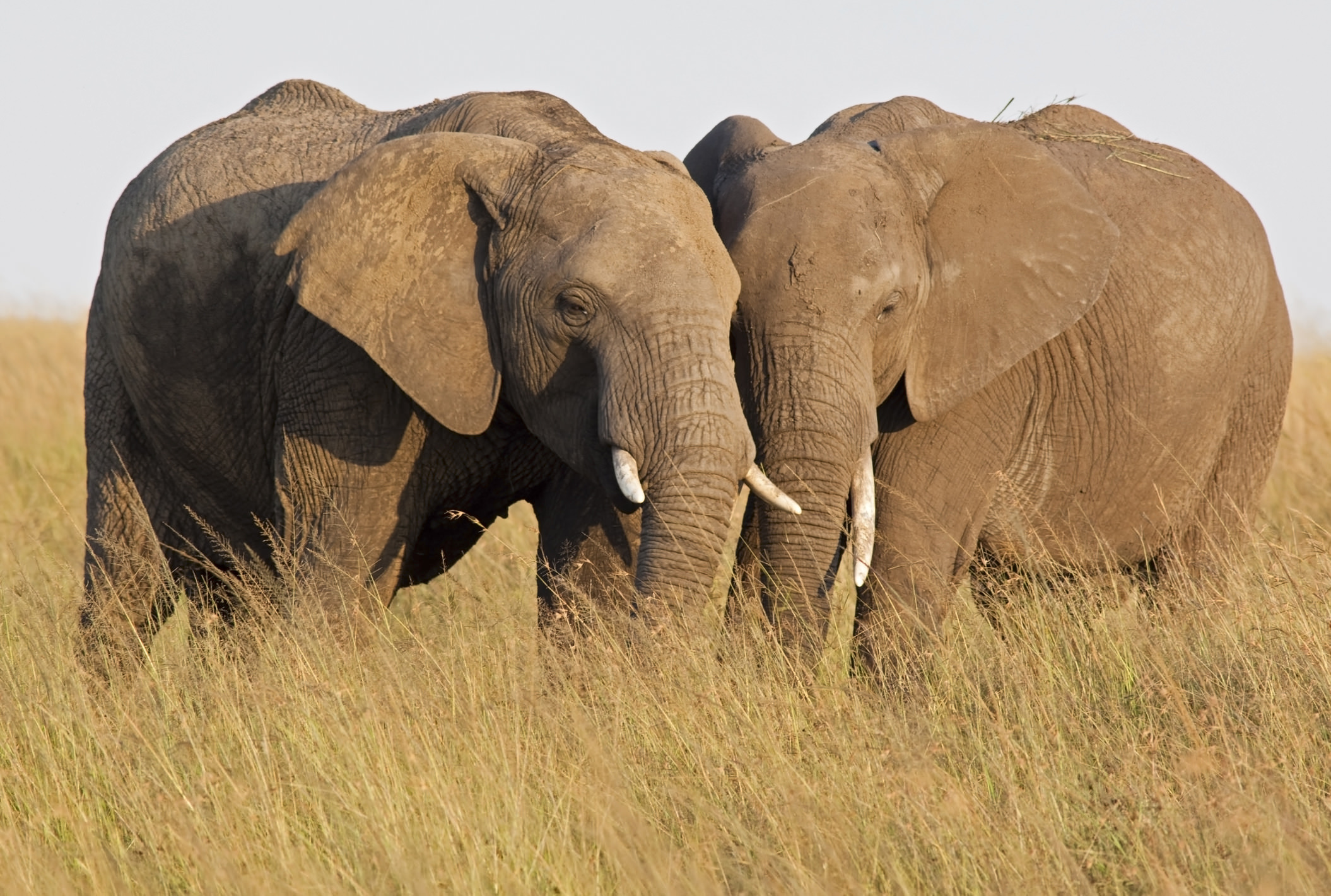 Opposite the previous image, the elephants in this image are looking inward, giving the effect of a more intimate photo. In this case, the shot becomes more like a portrait of a human couple - the elephants appear to be highlighting their close relationship by “posing” in this way. Instead of directing our eyes out of the frame, the inward position of the elephants keep us locked in on their eyes and the details of their ears, tusks, and trunks. 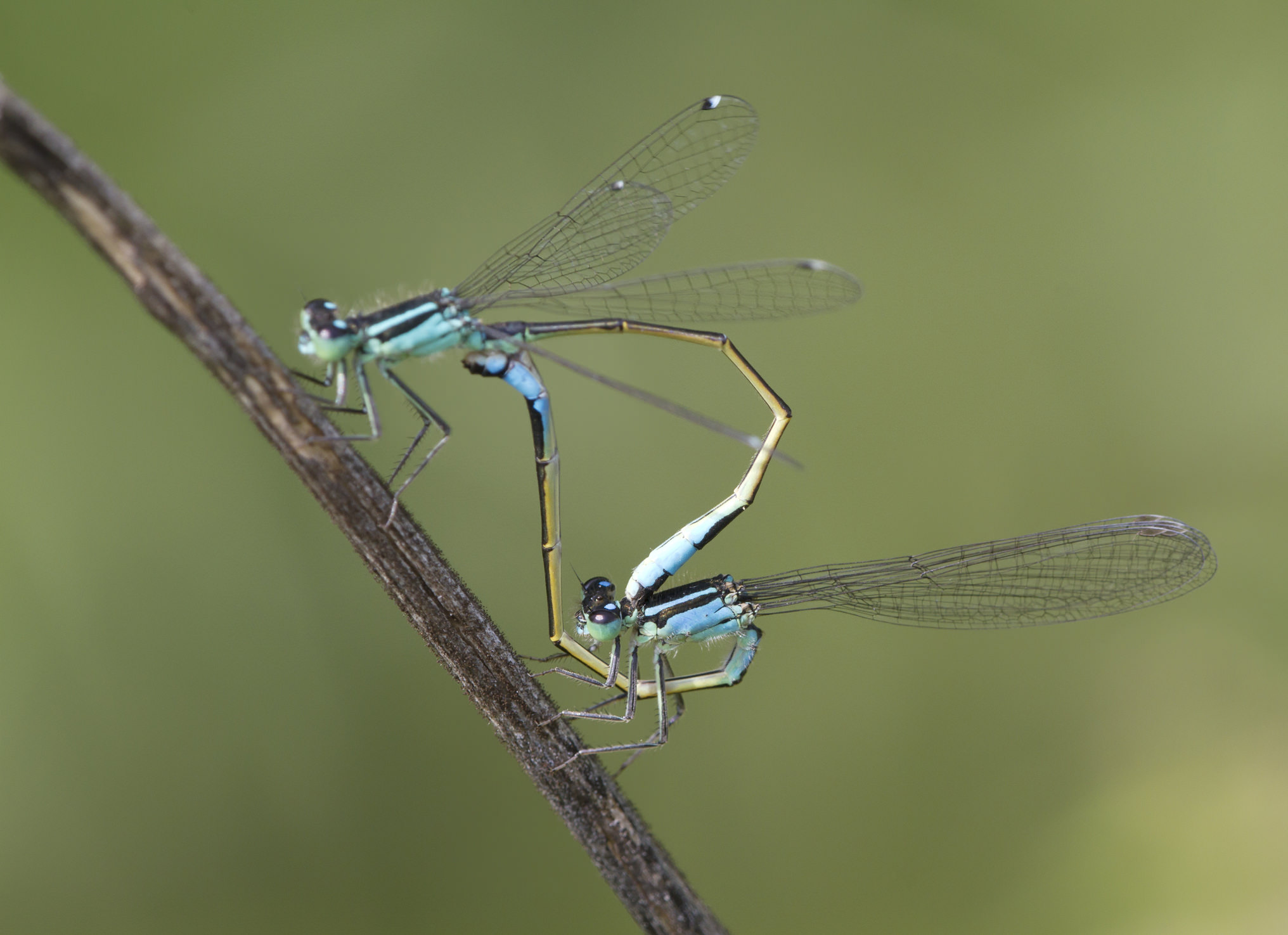 Shooting in pairs is an effective strategy for very small wildlife as well, as seen in the image of the damselflies above. Their gorgeous coloring and contorted shape of their bodies gives this image plenty of visual interest. Note that the non-descript background is ideal for showing off the details of their wings. And even though the damselflies are framed in the middle of the shot (which can lead to a “stuck” visual feeling), the inclusion of the twig adds visual action, leading our eye from right to left. 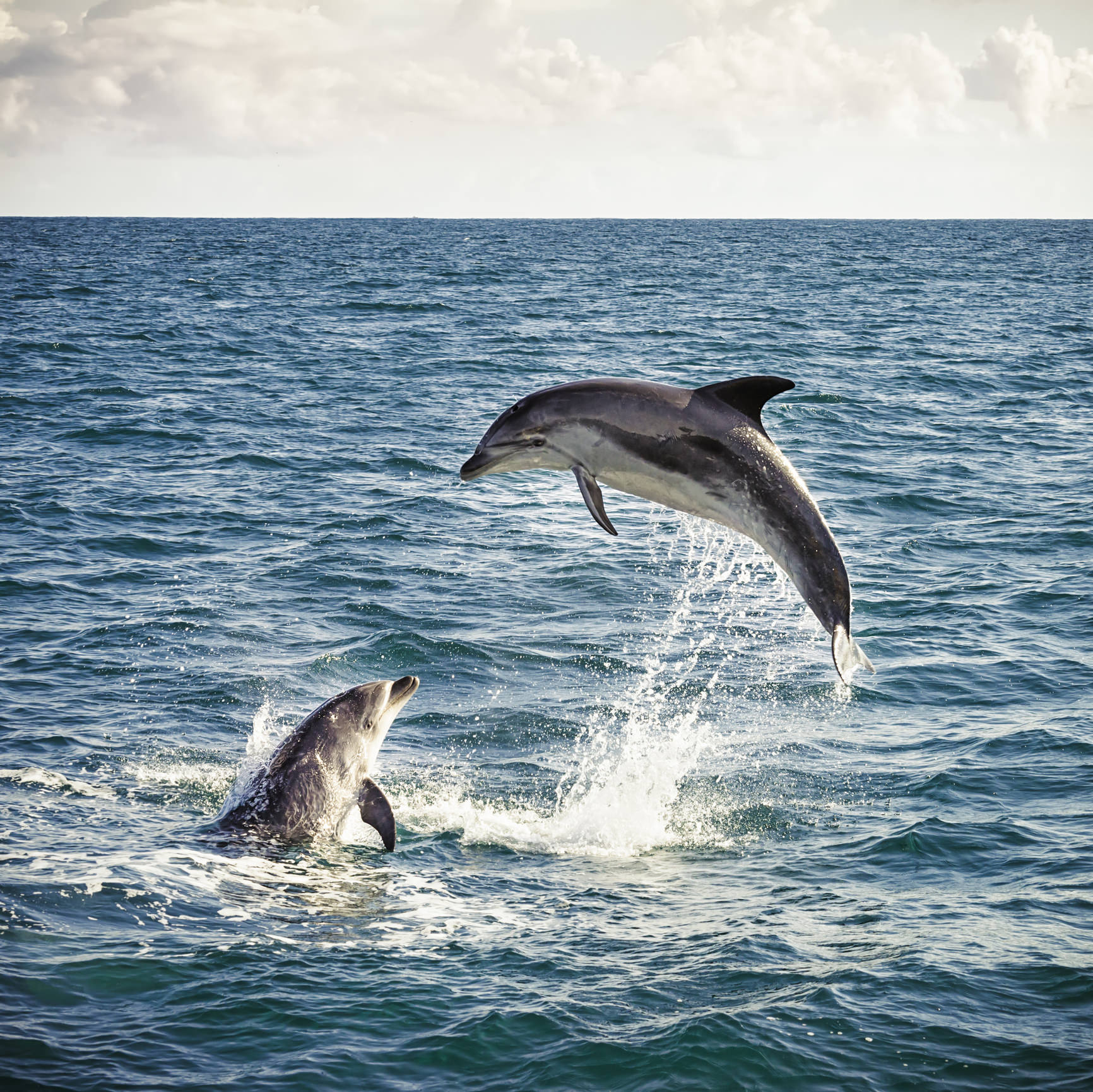 This image is a great reminder that in wildlife photography, timing is everything. The fact that the dolphin on the right is in the act of jumping adds a nice sense of action and movement to the shot. At the same time, it’s partner gazing up from the water gives the photo a distinct feeling of playfulness that allows the viewer to connect more deeply with these animals. Also notice how the horizon line is perfectly straight. When taking nature and wildlife photos, keeping the horizon straight is as important as your timing with the shot! 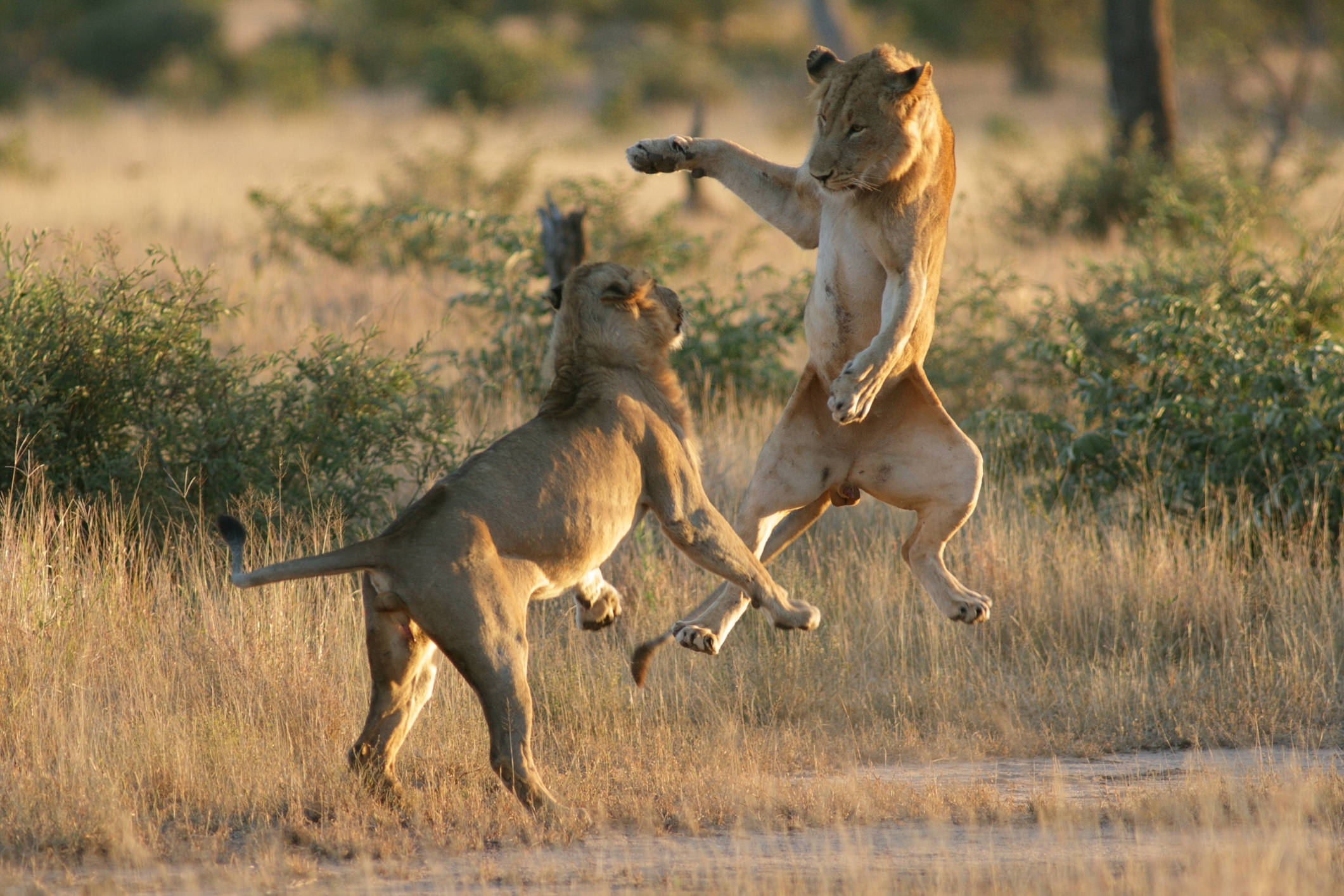 Speaking of action, these young lions engaging in play creates a completely different kind of image of these beasts. Where they might seem imposing or even dangerous in a “traditional” front-facing portrait, these guys remind us that they are just big cats after all. Again, timing is everything, with a more dramatic wildlife image created by snapping the shutter at the precise moment the lion on the took to the air. 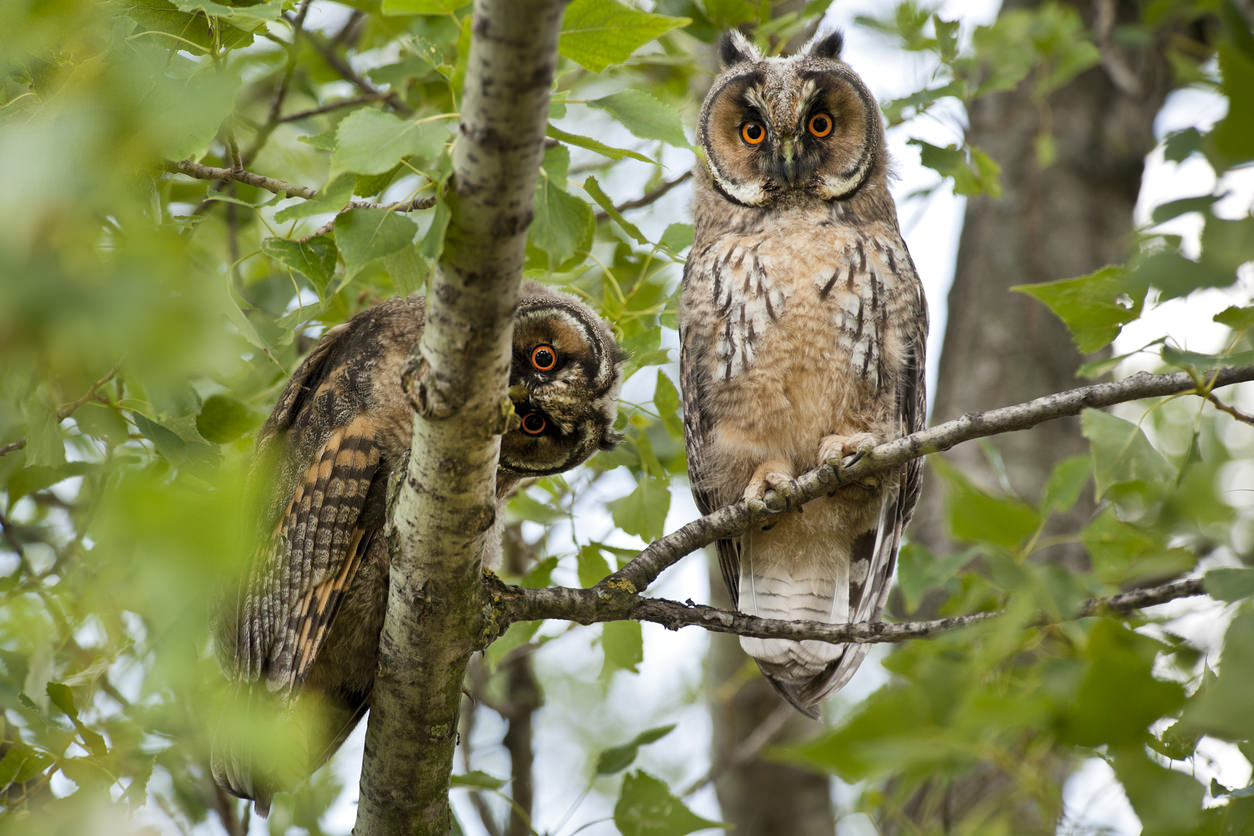 If you want an example of how animal pairs can add a little levity to your shot, this is it. Though the owl on the right looks stately and composed, the owl on the left, peering out from behind a tree branch, has a silly appearance that makes you smile. Not all photographs of nature and wildlife have to be serious or documentary - when the opportunity arises to create an amusing photo, take it! What’s more, use this image as an example of how shooting through something can give an image more depth. The presence of the blurred leaves in the foreground gives us an indication of how far the owls are from the lens. 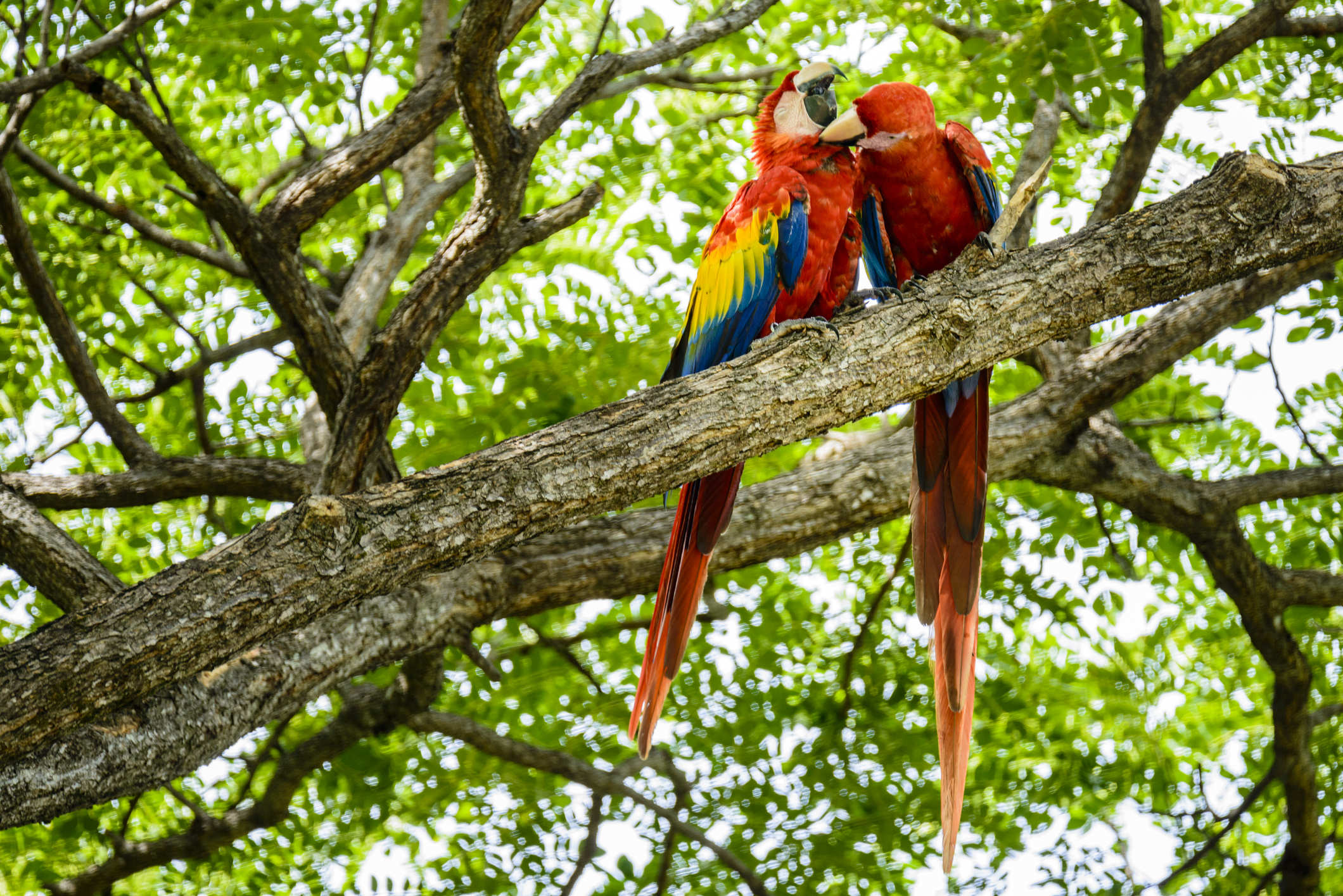 Typically, it’s common practice to photograph an animal from its eye-level. However, this image shows us that sometimes breaking the rules is the best option. By shooting at a slightly upward angle, the photographer emphasizes the length of the birds’ tails - one of their most prominent features - and this has been done without sacrificing a view of the birds’ faces. Note as well how the background - though varied in light and color - is still subdued enough such that it doesn’t distract attention away from the birds. 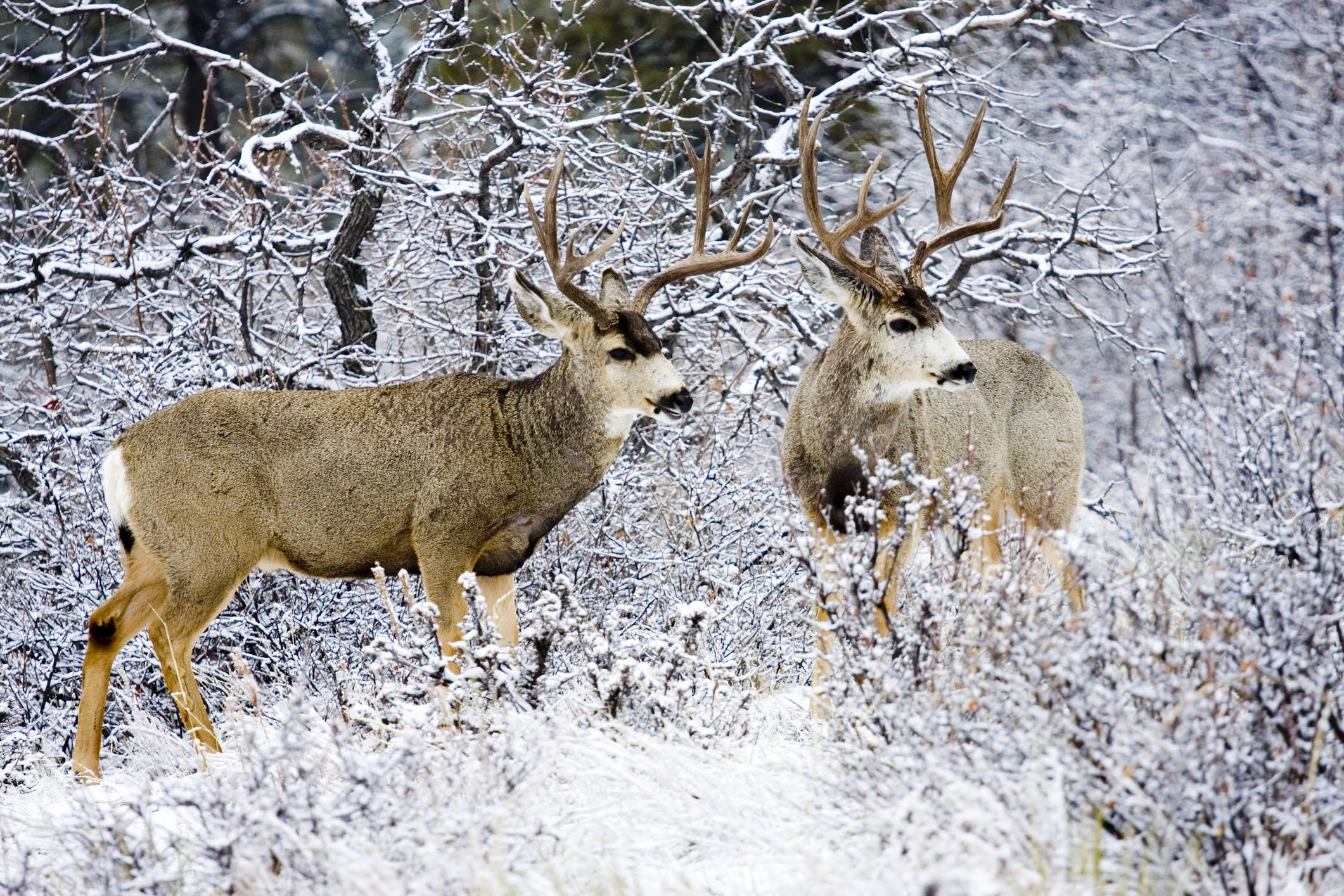 Wintertime photos are difficult to create of any subject. With so much white in the photo, it’s easy for your camera to be tricked into thinking the scene is brighter than it is, resulting in snow that looks dull and gray. In this instance, we see the value of taking control of white balance, as the snow surrounding the mule deer is bright and white. Also, much like in previous images, the fact that both deer are looking in the same direction gives us a sense of movement and wonderment as to what they might be looking at outside the frame. 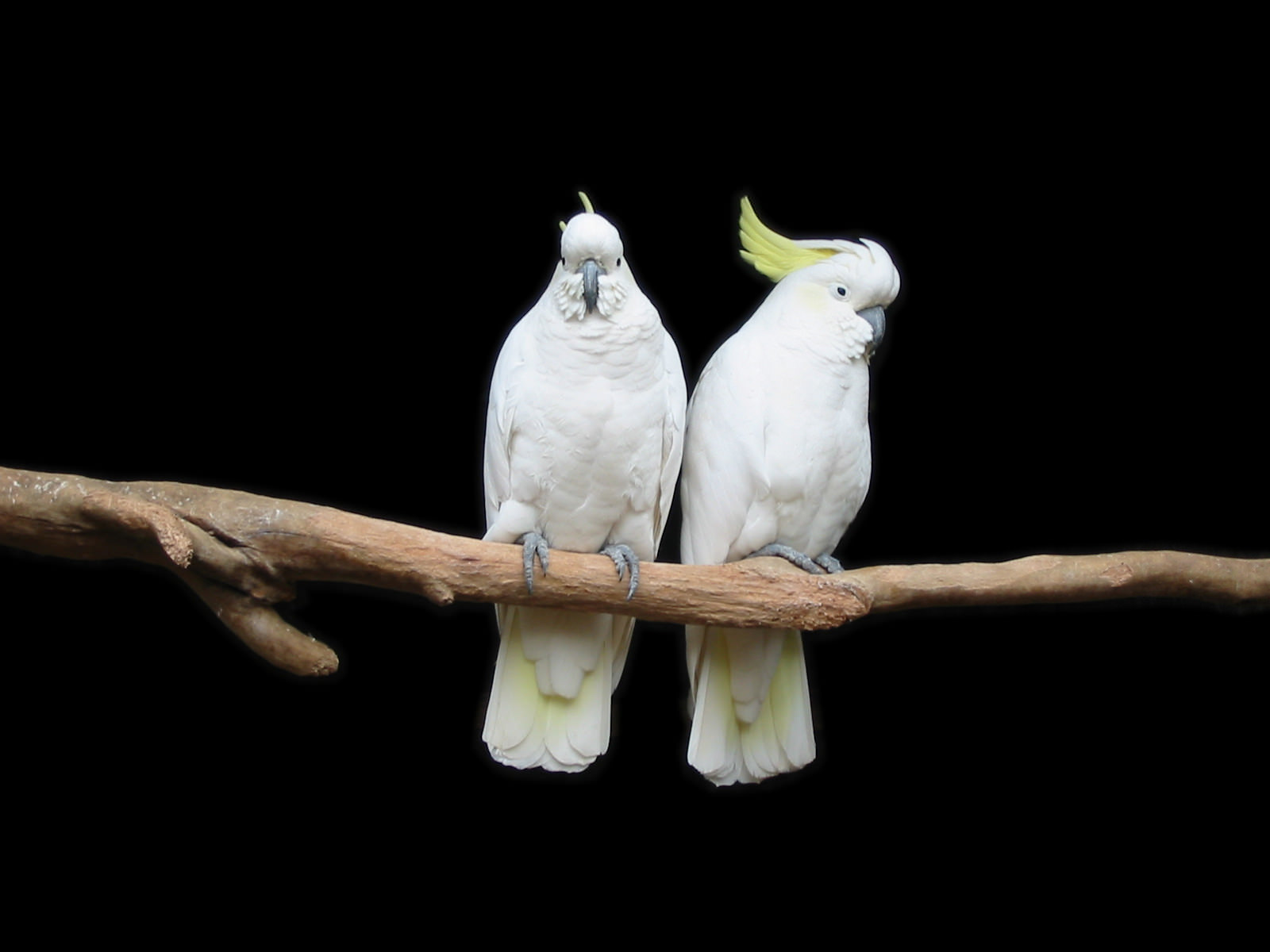 When photographing wildlife, the need for a background that allows the animals to take center stage cannot be understated. In this case, the pure black background is the ideal backdrop for a couple of reasons. First, the white-on-black color scheme gives the image excellent contrast and great visual appeal. Second, without any distracting elements in the background, we’re able to pick up the fine details of the birds, including the shape and structure of their feathers. 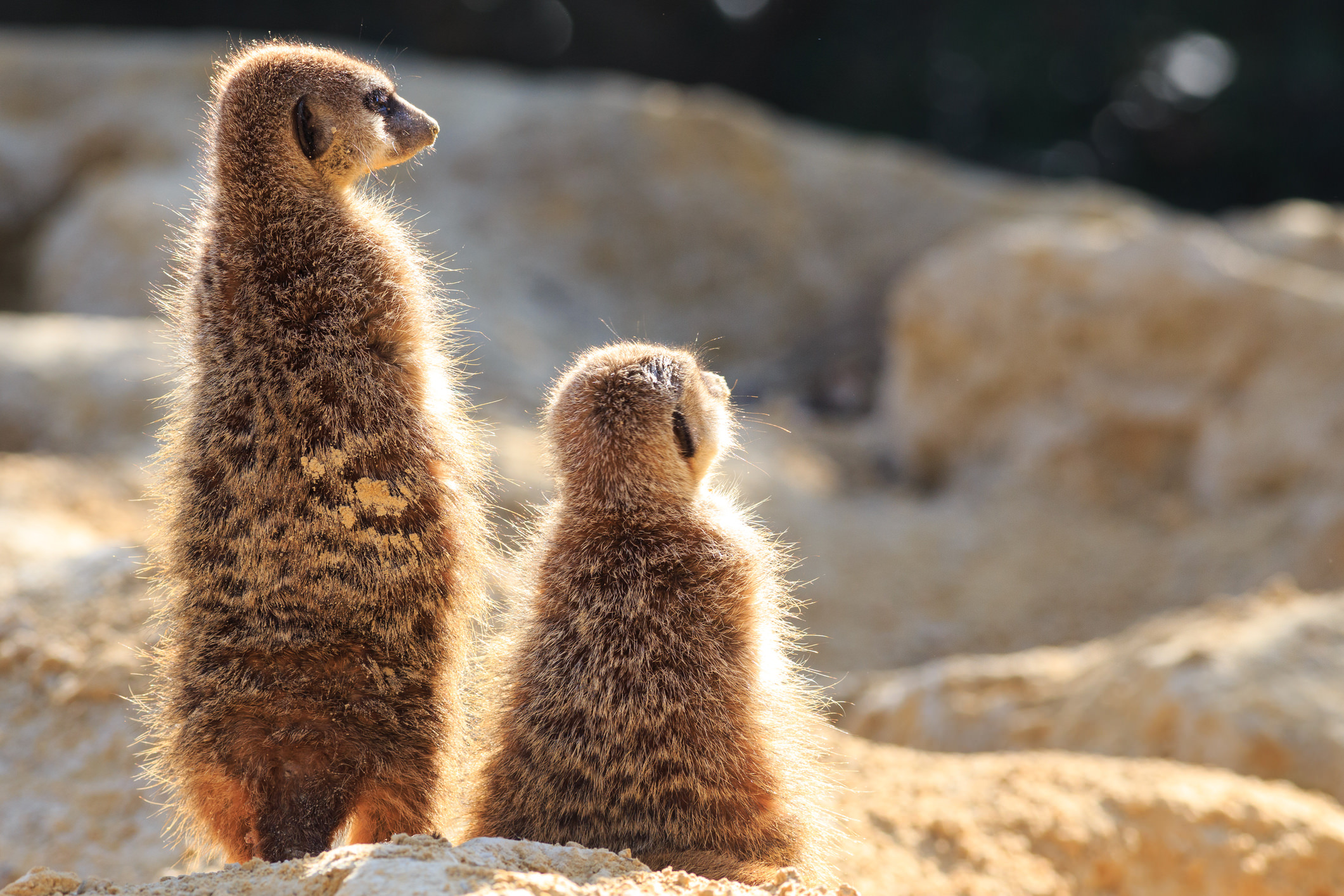 Though it’s usually recommended that the wildlife you photograph is facing you, in this example, we can see that even if the animals peer in another direction, the image can still be a success. There is a sense of action here, as both meerkats are looking off to the right, creating a sense of intrigue as to what they are viewing. The soft backlighting also helps make this image pop, as it helps put the detail of the meerkats’ fur on full display. 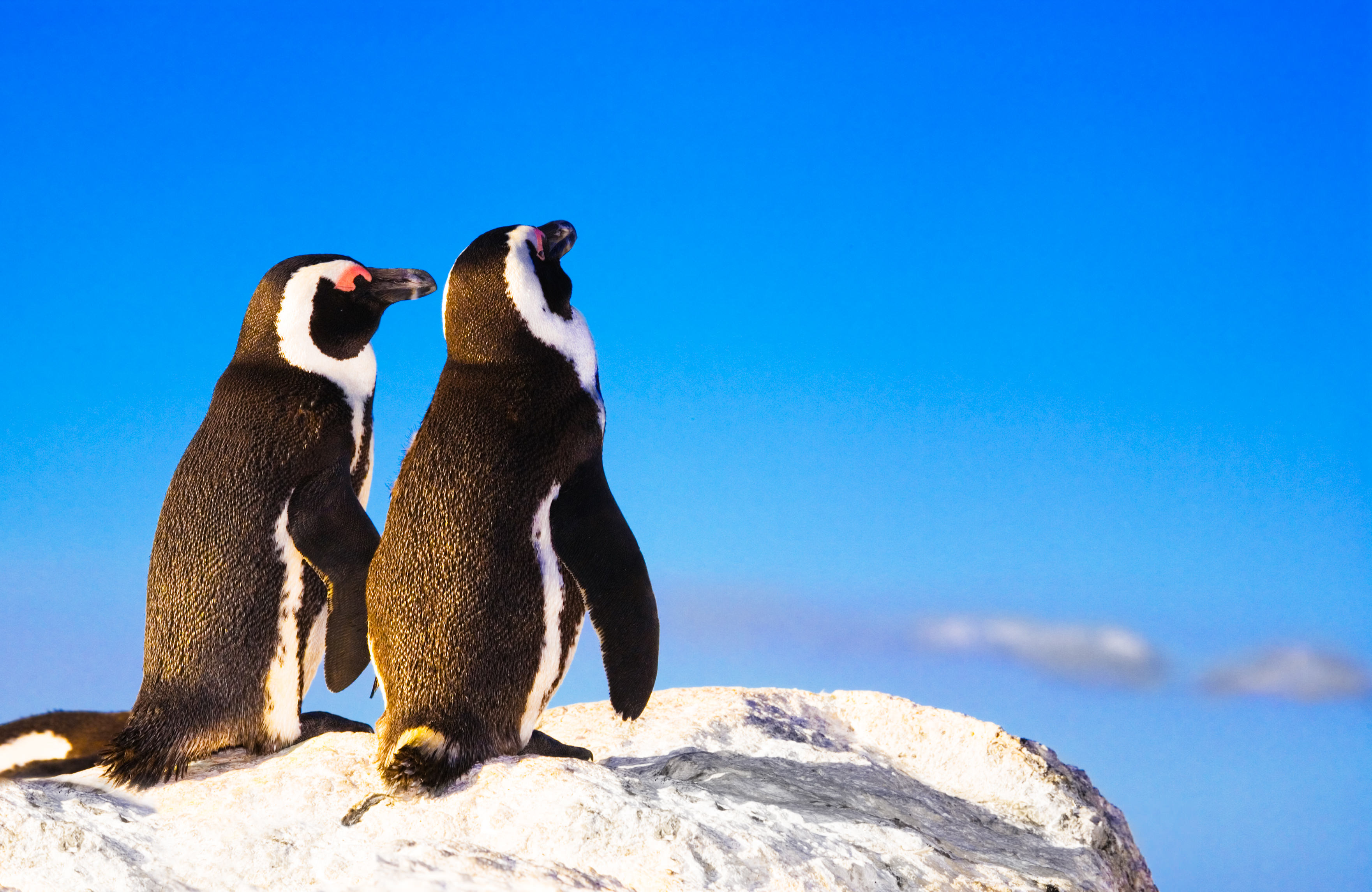 Here, we see how dramatic color in a wildlife shot can take it to an entirely other level. The deep, bright blue of the sky contrasts beautifully with the snow in the foreground and the white and black coloring of the penguins. Note as well how the sky was incorporated into the shot - the photographer is shooting at an upward angle. Not only does this put the sky on full display, but it also makes the penguins more prominent in the frame, accentuating their height. 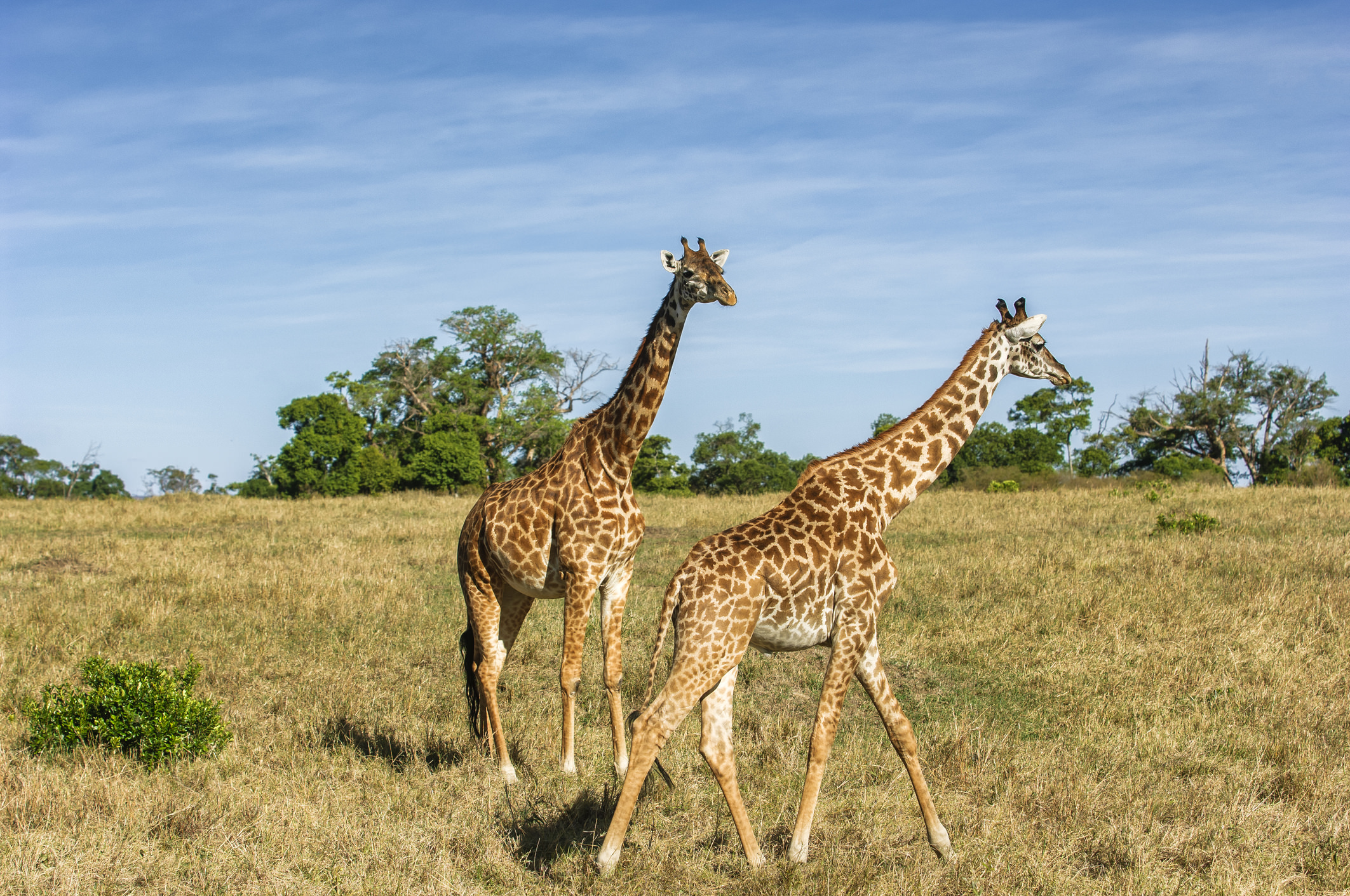 Positioning of animals in a wildlife shot is crucial to the success of the image. In this image of the pair of giraffes, the difference in their position relative to the camera gives the photo improved interest. In the instance of the giraffe on the right, the profile view allows us to see the full extent of its legs and neck, something that we can’t fully see in the giraffe at the right. And, as is the case in several other images above, the photo has a greater feeling of activity and movement because the giraffes are both looking in the same direction. 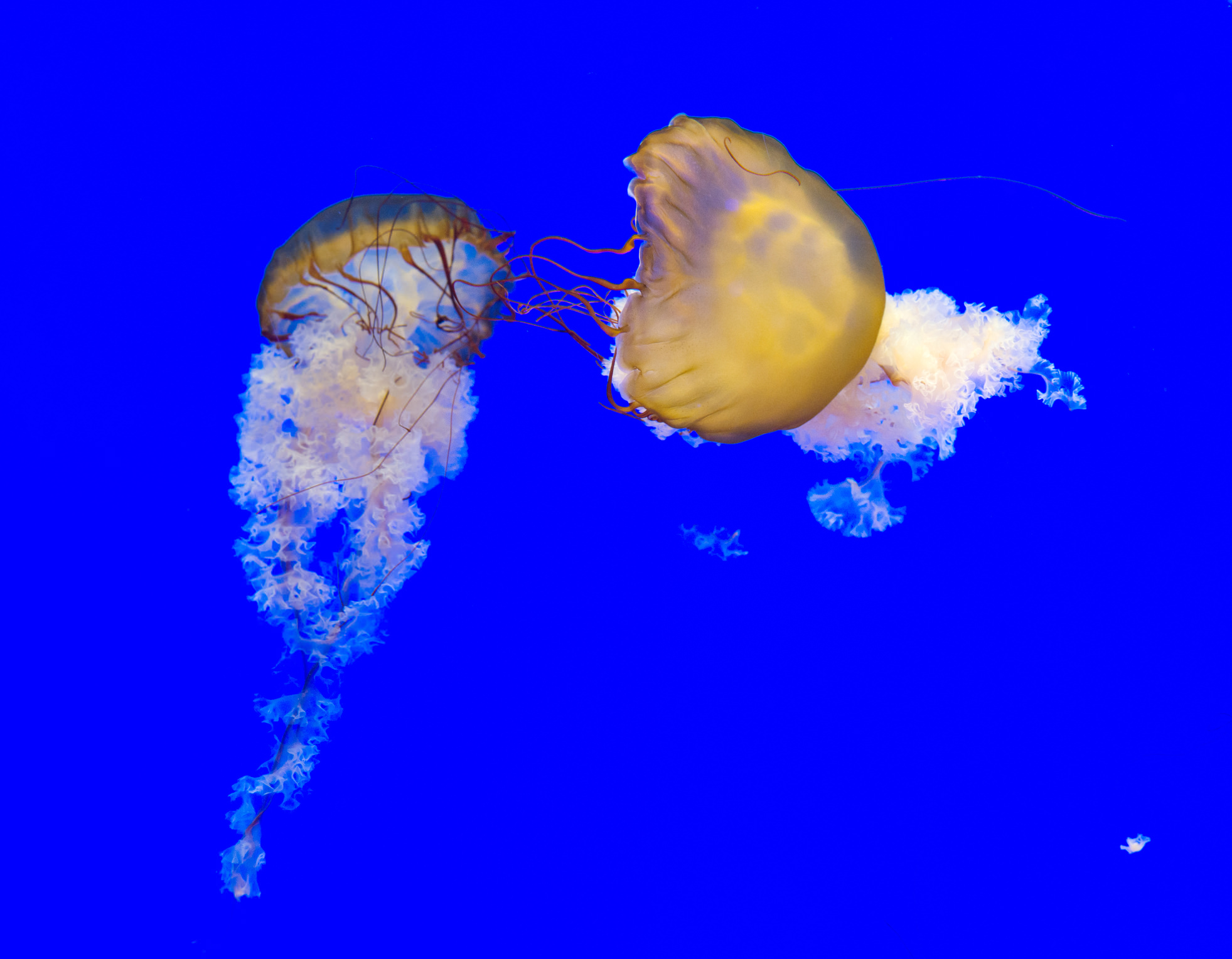 Like the penguin photo earlier, this image of jellyfish shows how bright, bold colors can add a sense of visual appeal to a wildlife shot. In this case, using Lightroom to manipulate the saturation levels of the background makes up for the relative lack of color in the jellyfish. What’s more, by taking a shooting position at the same depth as the jellyfish, the photographer is able to give us a full view of the interesting shape and texture of their bodies. 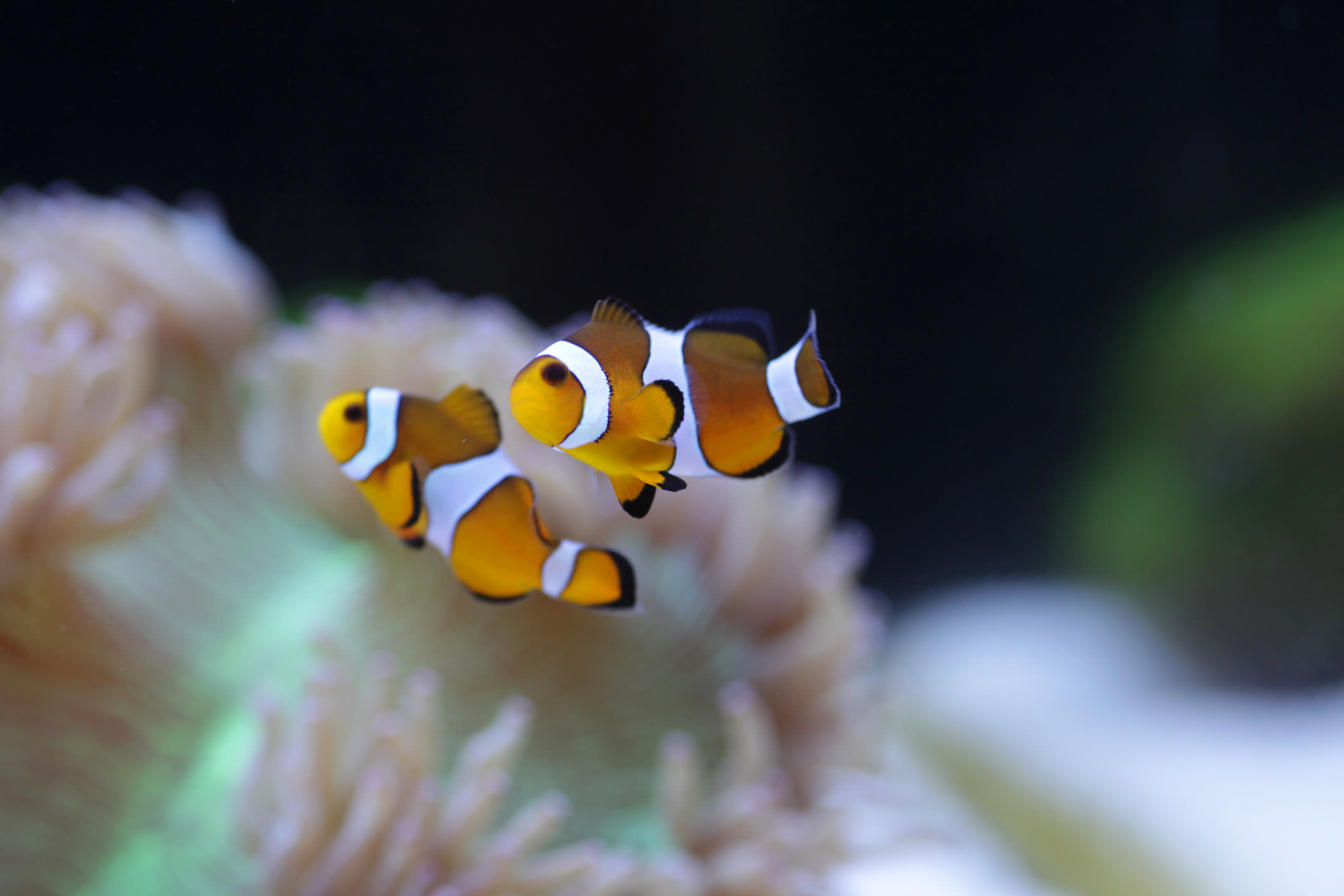 I was going to close off the article, but how can I not include Little Nemo?! This shot of clownfish shows us again how including pairs of animals creates an image with a better dynamic and improved depth. The narrow depth of field works to the photographer’s advantage, as the background elements are both bright and texture-rich. By throwing the background out of focus, our attention remains on the fish and allows us to inspect their shape, color, and other details more fully.

With that, you’ve got 17 beautiful nature and wildlife photos to inspire your photography this week. See how you might use these images to create improved images of your own, and then upload your photos to the PhotographyTalk galleries. I, for one, would love to check out the photos you take. And, you never know when your photo might be selected for a feature on the site!