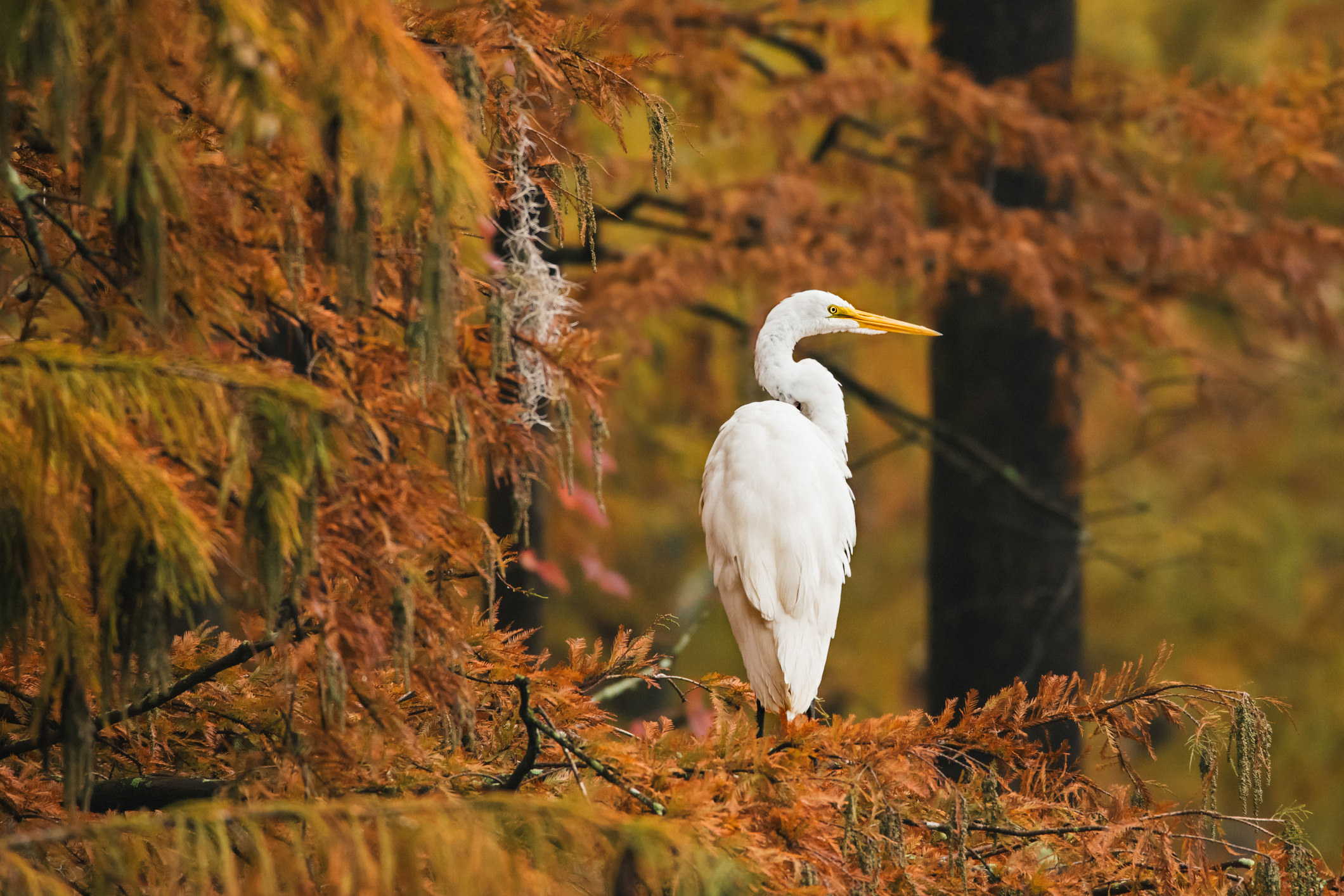 Just about any time I see a bird, I’m reminded of that iconic scene in the original Jurassic Park when Dr. Grant schools the precocious kid about how dinosaurs have more in common with today’s birds than today’s reptiles.

It’s an intriguing thought, to be sure.

But thank goodness birds are much prettier than dinosaurs!

And much less dangerous, I’d imagine…

Having seen a few birds today, I thought it’d be fun to have a look at various birds from around the world.

This collection of photos is a chance for us to admire the beauty of birds, and maybe they will provide a bit of inspiration for your own photography pursuits too.

So, whether you’re a bird photographer or not, enjoy these stunning photos of birds! 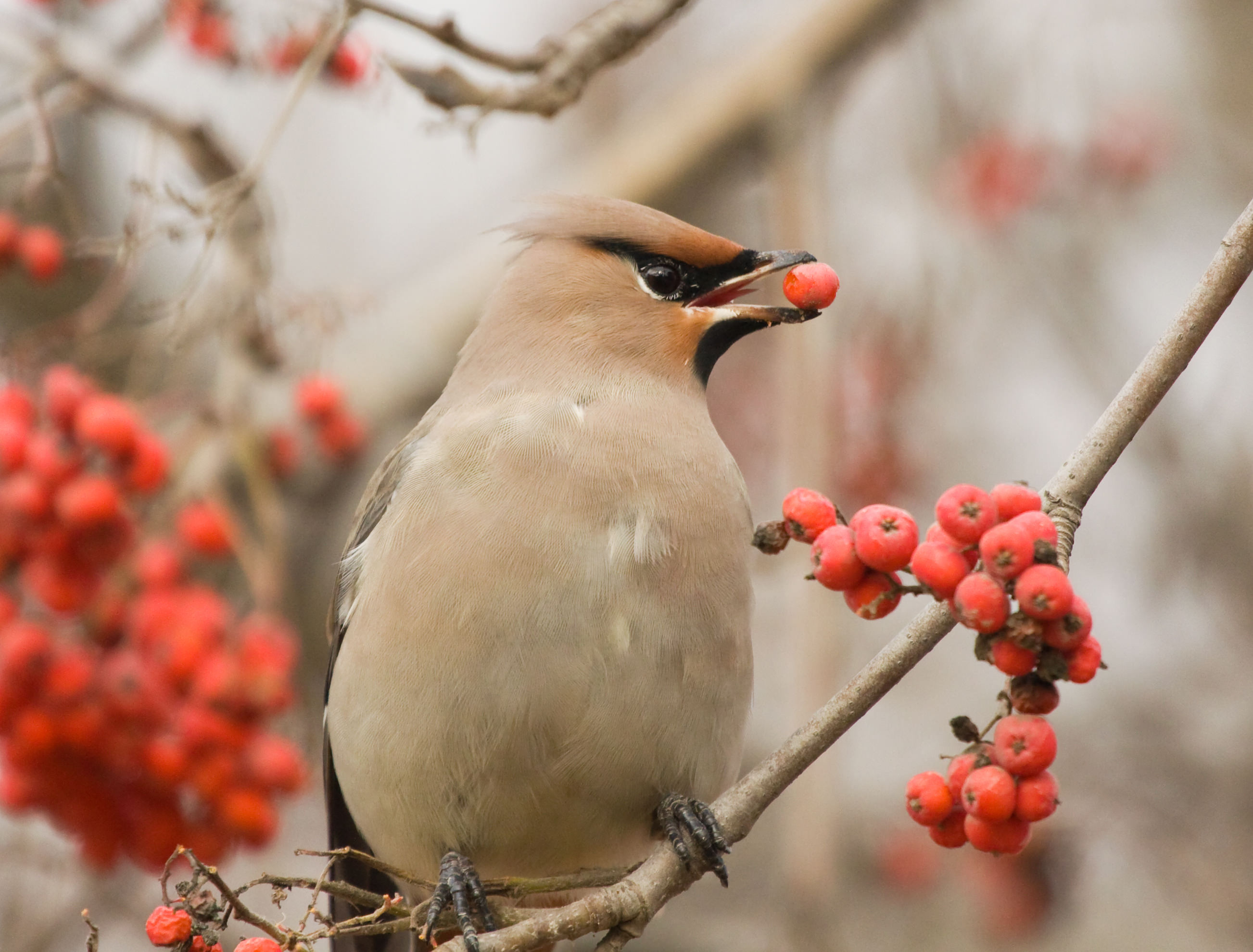 When photographing birds, especially small ones like the bohemian waxwing above, it’s important to work your shooting angle such that the background doesn’t distract from the bird. Even if the background is blurred, bright colors, weird textures, and odd shadows can wreak havoc with the composition. If need be, move left or right, up or down to eliminate distracting background elements to get an improved composition like the one above. 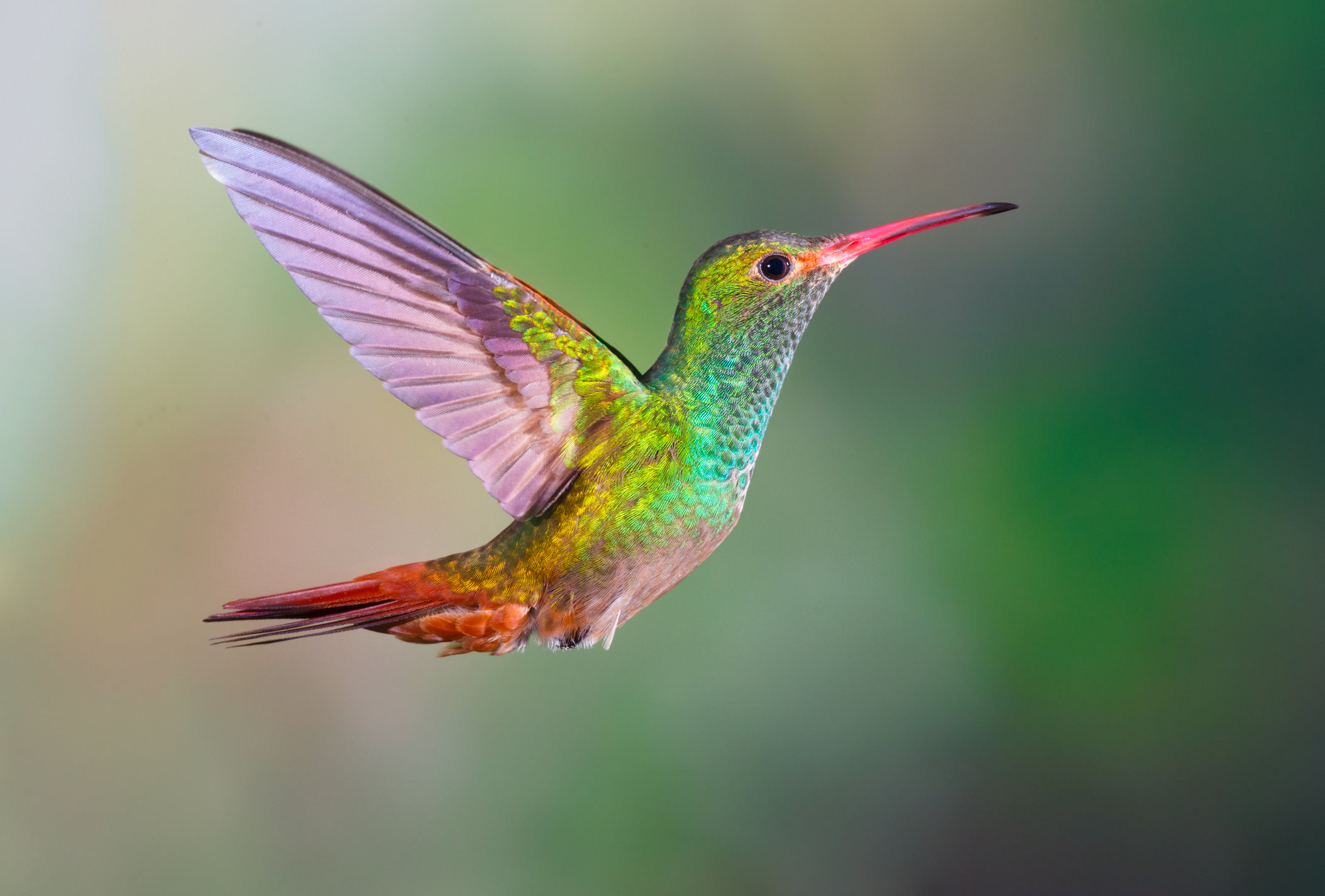 If you have the patience, photographing a hummingbird can be incredibly rewarding. Naturally, you have to work with a super fast shutter speed to freeze the movement of a hummingbird’s wings. But because you’ll likely be shooting with a very wide aperture, you can get a nicely blurred background like in the image above. Because hummingbirds are so small, try to frame the shot without anything else in the frame - that way the bird takes center stage in the photo. 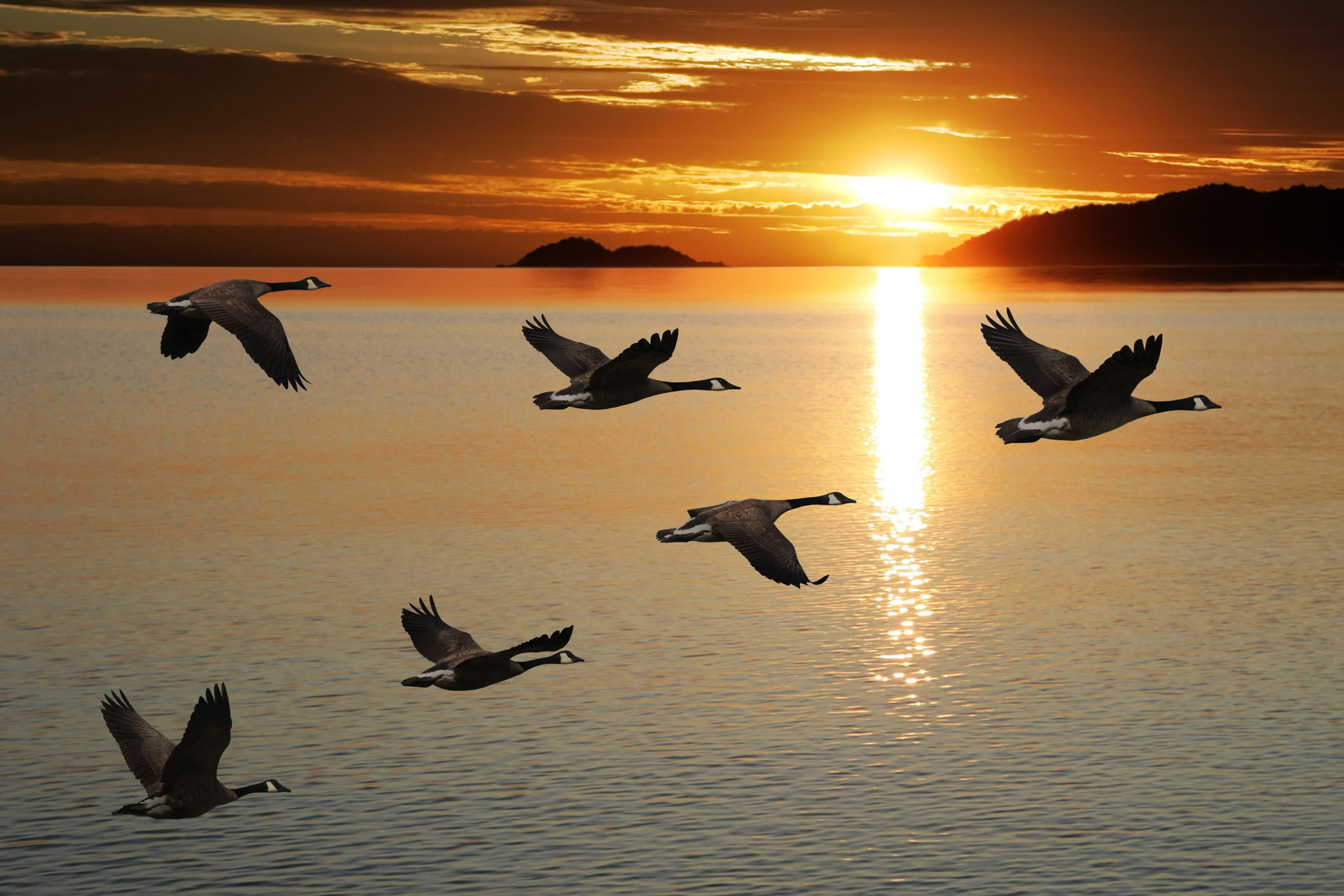 Photographing birds in flight - and a flock of birds at that - requires a good deal of skill and a bit of luck too. As with the previous example, you’ll need to ramp up the shutter speed to avoid blur in the birds’ wings, but because you’re photographing a group, a smaller aperture to extend the depth of field is necessary. Use a higher ISO to get a good exposure, if need be. When framing the shot, get in close enough such that the viewer can see some detail, but keep it wide enough to give some context to the environment surrounding the birds. 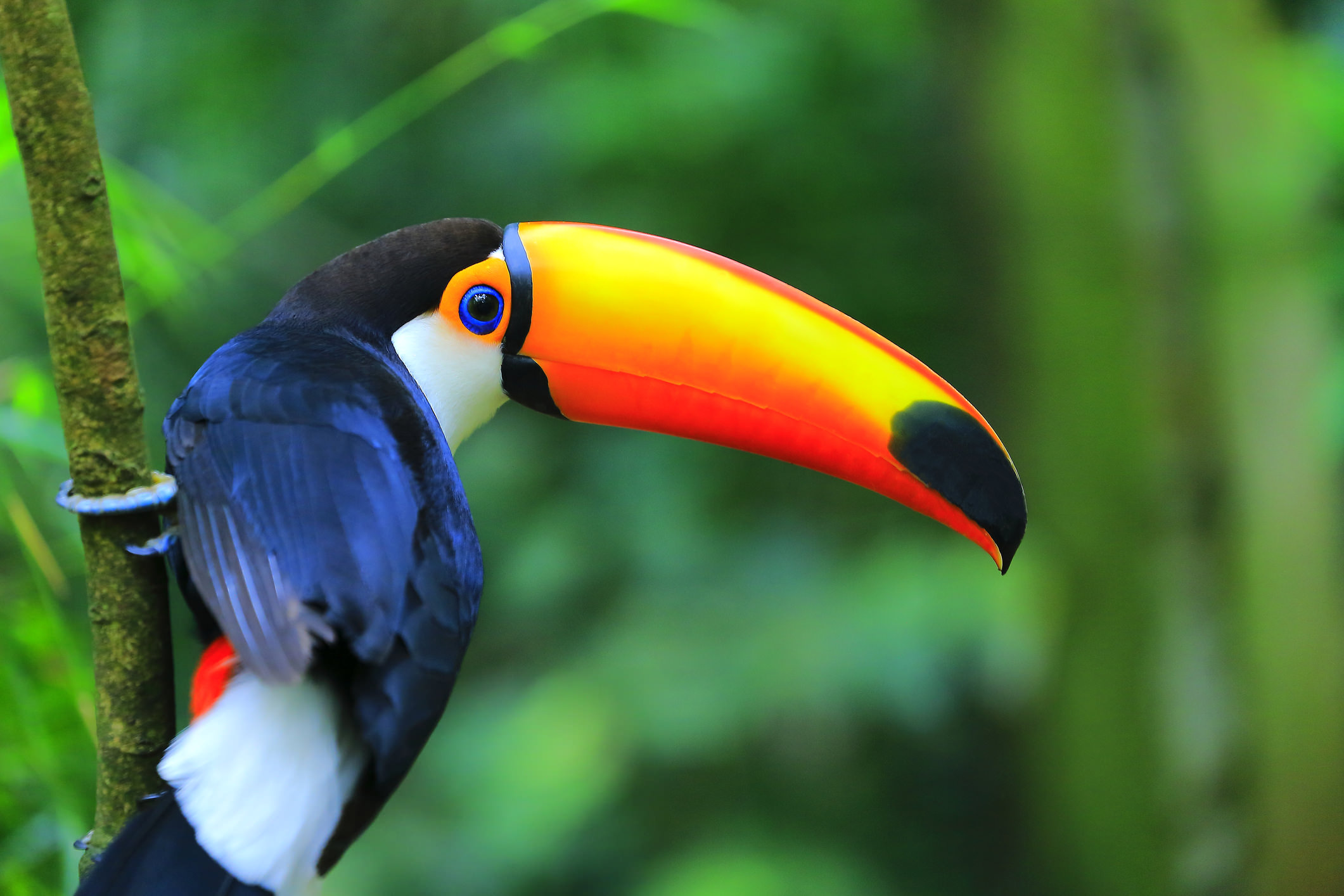 When photographing a bird as colorful as a toucan, it’s important to keep the rest of the image as simple as possible to avoid overwhelming the viewer. Too much color, texture, light, and so forth can be distracting and end up feeling a bit muddled. However, when you tone down the rest of the scene - keeping it relatively one color and blurring the background, as was done in the image above - you make it easier for the viewer to process the sheer beauty of the bird’s color. The soft, even natural lighting helps make the image better as well. 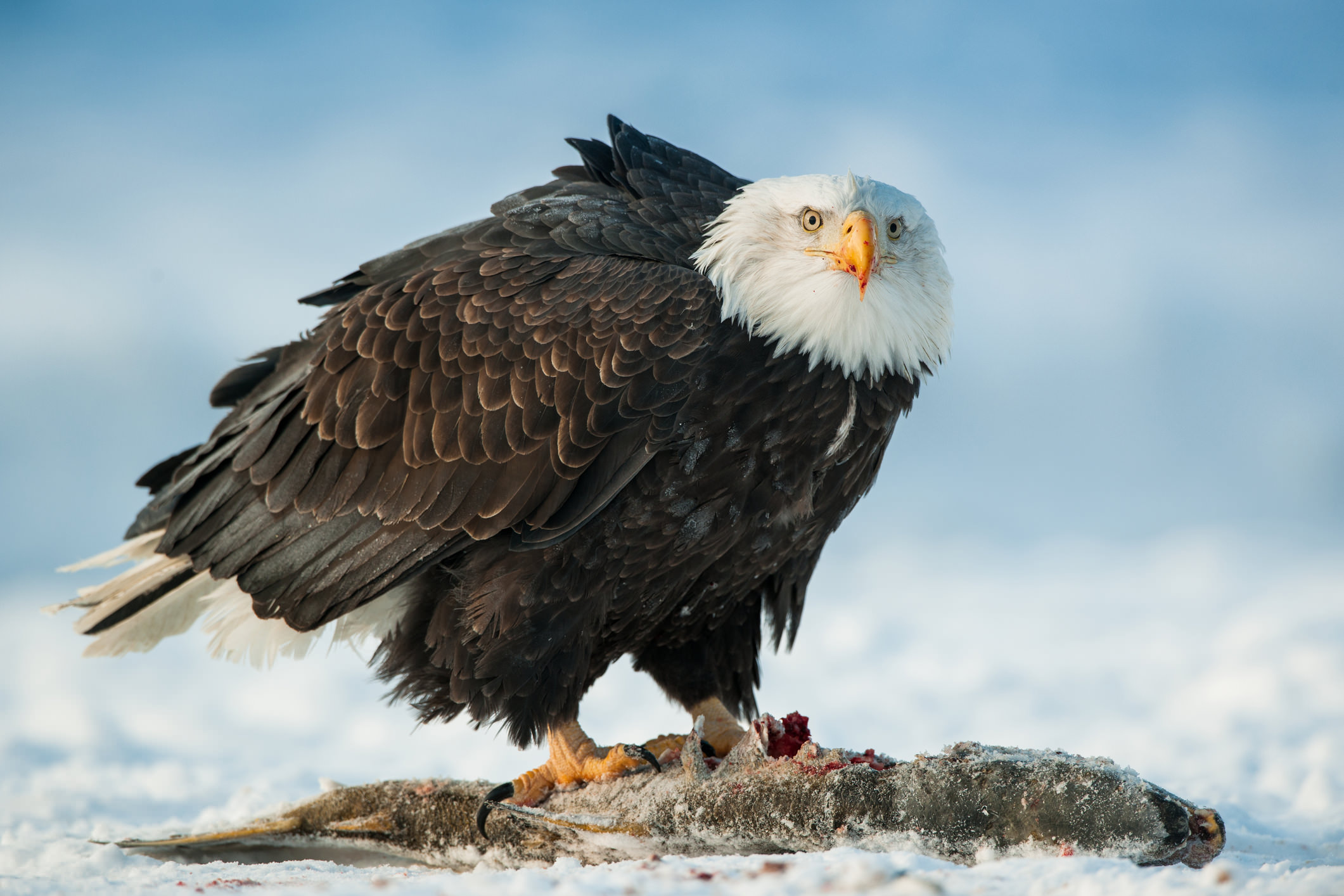 Birds of prey are one of the favorite targets of bird photographers because they provide so much action, even when they aren’t in flight. In this example, the shot is framed perfectly to include the eagle’s dinner. But note how the fish doesn’t distract from the details of the eagle - it’s intense eyes, sharp beak, the texture of its feathers, and its enormous claws are all on full display. 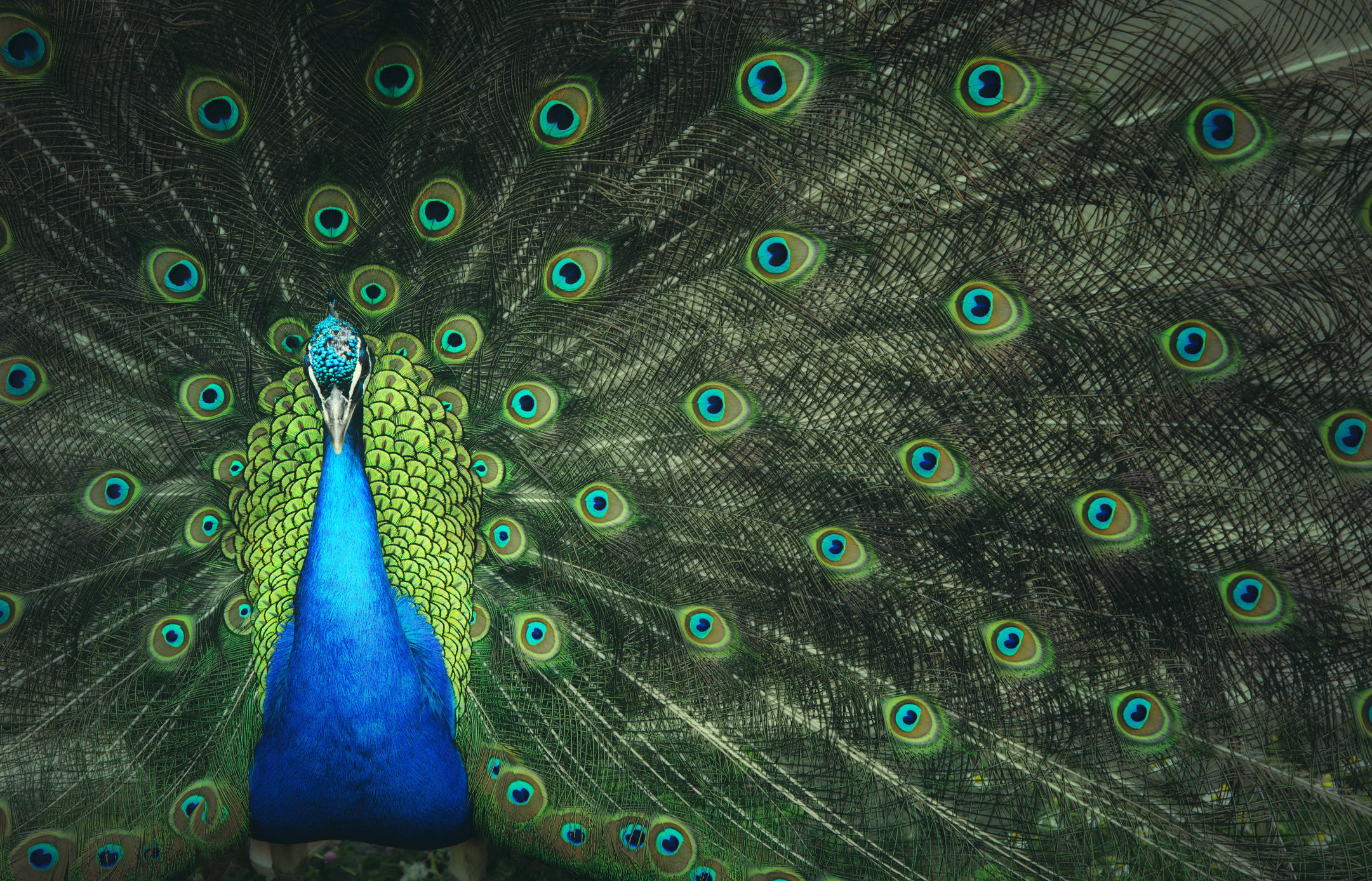 Peacocks are one of the most photogenic birds, and this photo shows us why. By filling the frame with the bird, we can more easily examine the intricate details of the peacock’s feathers. It also gives us a sense of the enormity of the bird’s feathers. Additionally, by filling the frame, the bright blue body and head of the bird are on full display. 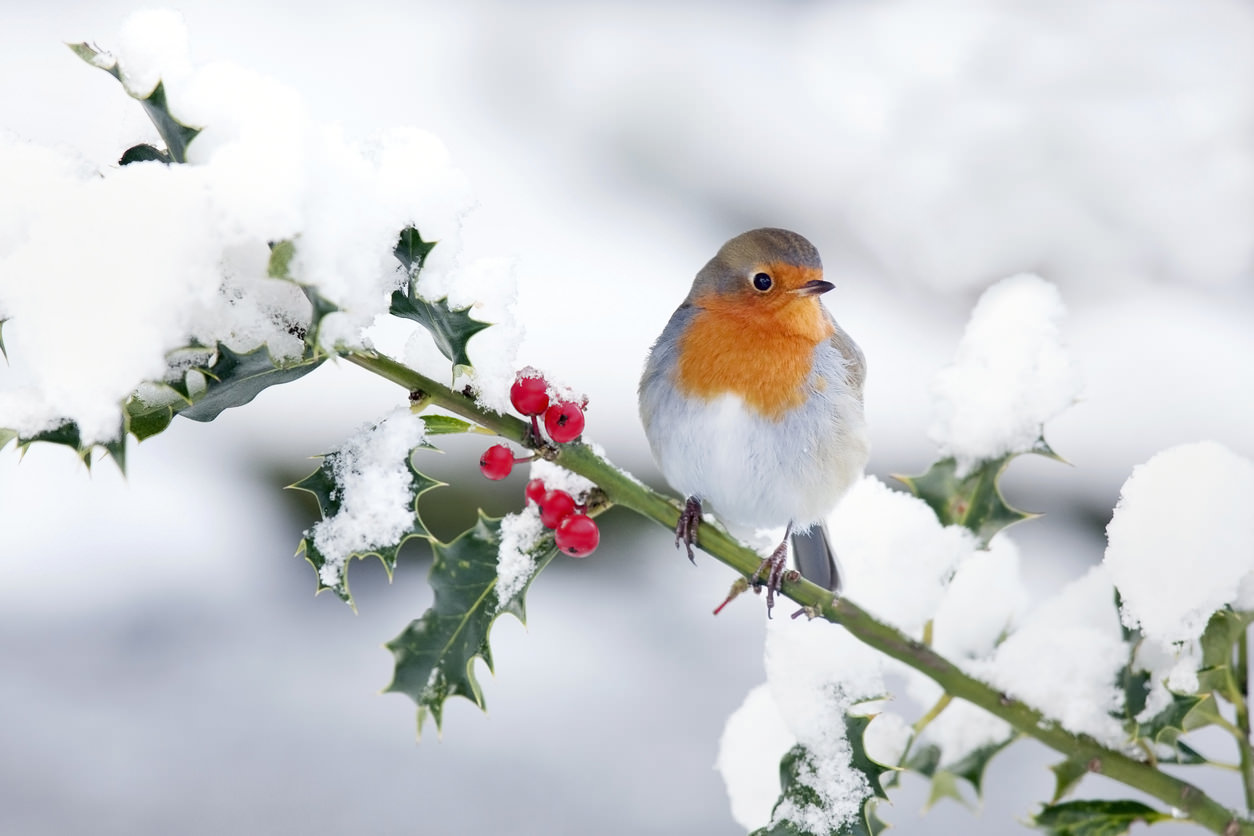 When photographing small birds like this robin, incorporating the perch on which they sit can help add context and dimension to the shot. In this case, the upward angle of the branch provides a little bit of interest, as do the bright red berries. However, not that it’s still the bird - and not those supporting details - that is tack-sharp in the image so as to draw more attention to it. 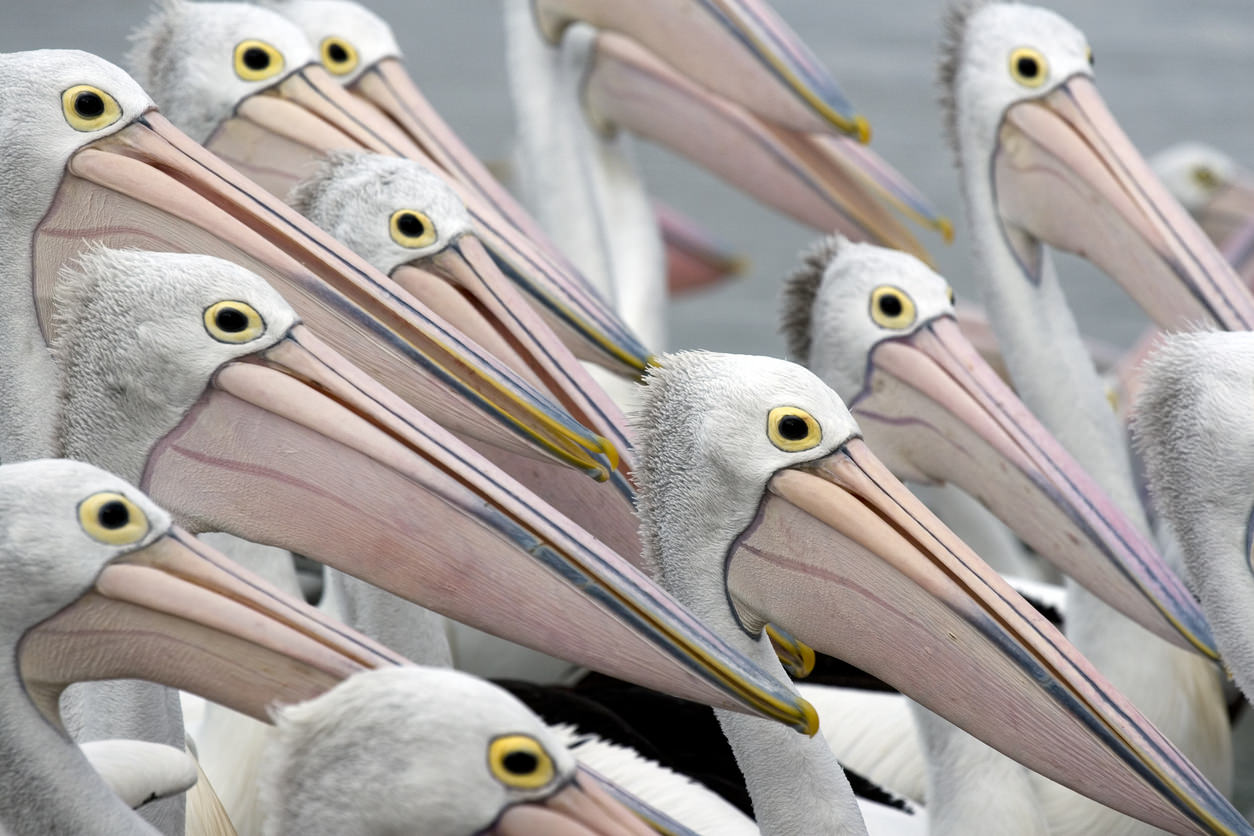 Humans naturally enjoy patterns, and that is no exception when it comes to photographs like this. By framing the shot such that each bird is looking in the same direction, we get very strong repeating patterns of beaks and eyes that makes for a much more dramatic shot. Furthermore, much like the peacock image above, by filling the frame with this pattern, we get a sense that this group of birds is quite large. 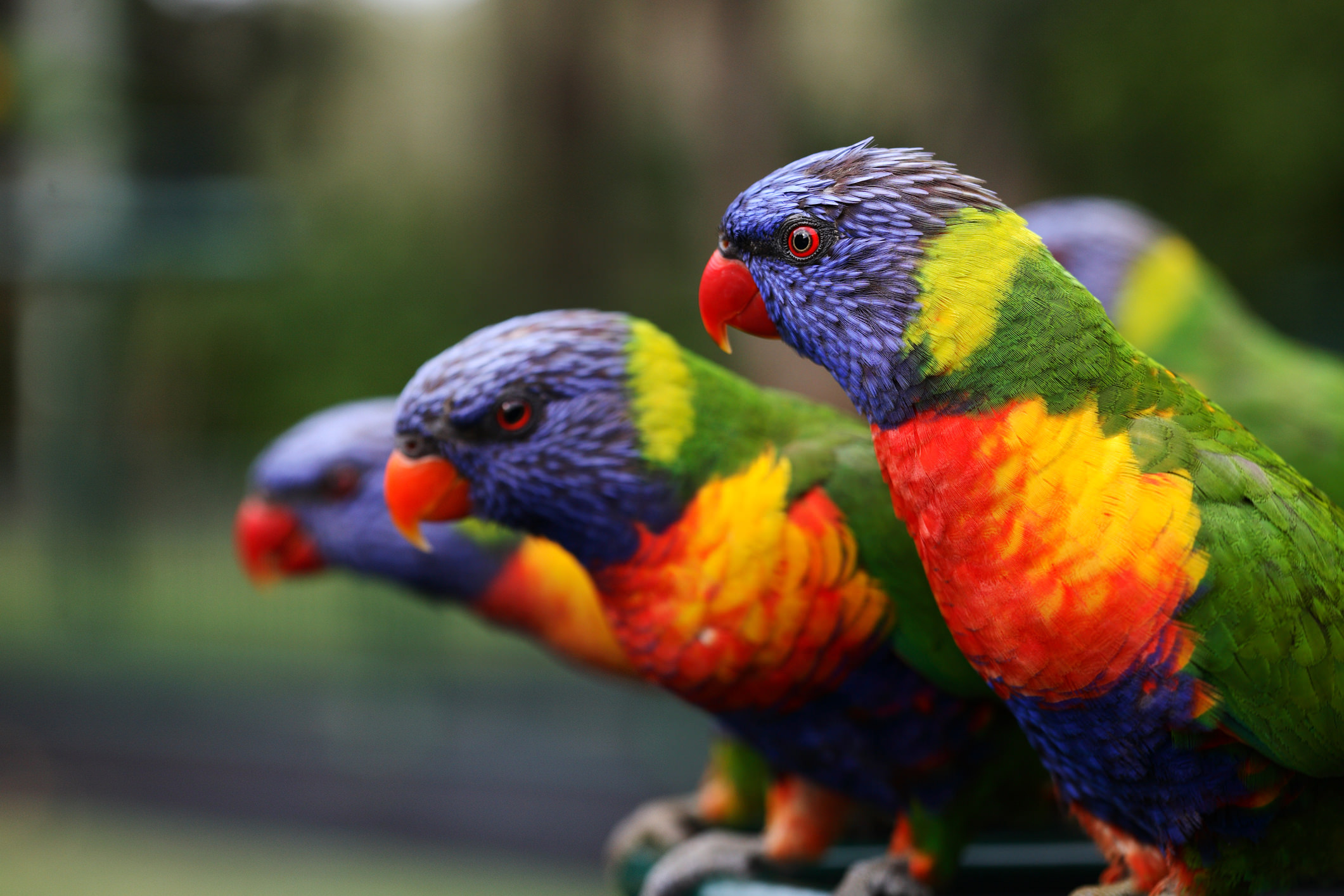 In this group shot, we see the value of a shallow depth of field. Though the bird in the front is obviously the point of focus, the birds in the background nevertheless add depth to the shot. In this case, rather than being able to inspect the details of their feathering, we’re able to get more color detail in the shot from the birds in the background. Note that in this case, the background is relatively devoid of color (as other examples have been) to prevent the shot from being overloaded with color. 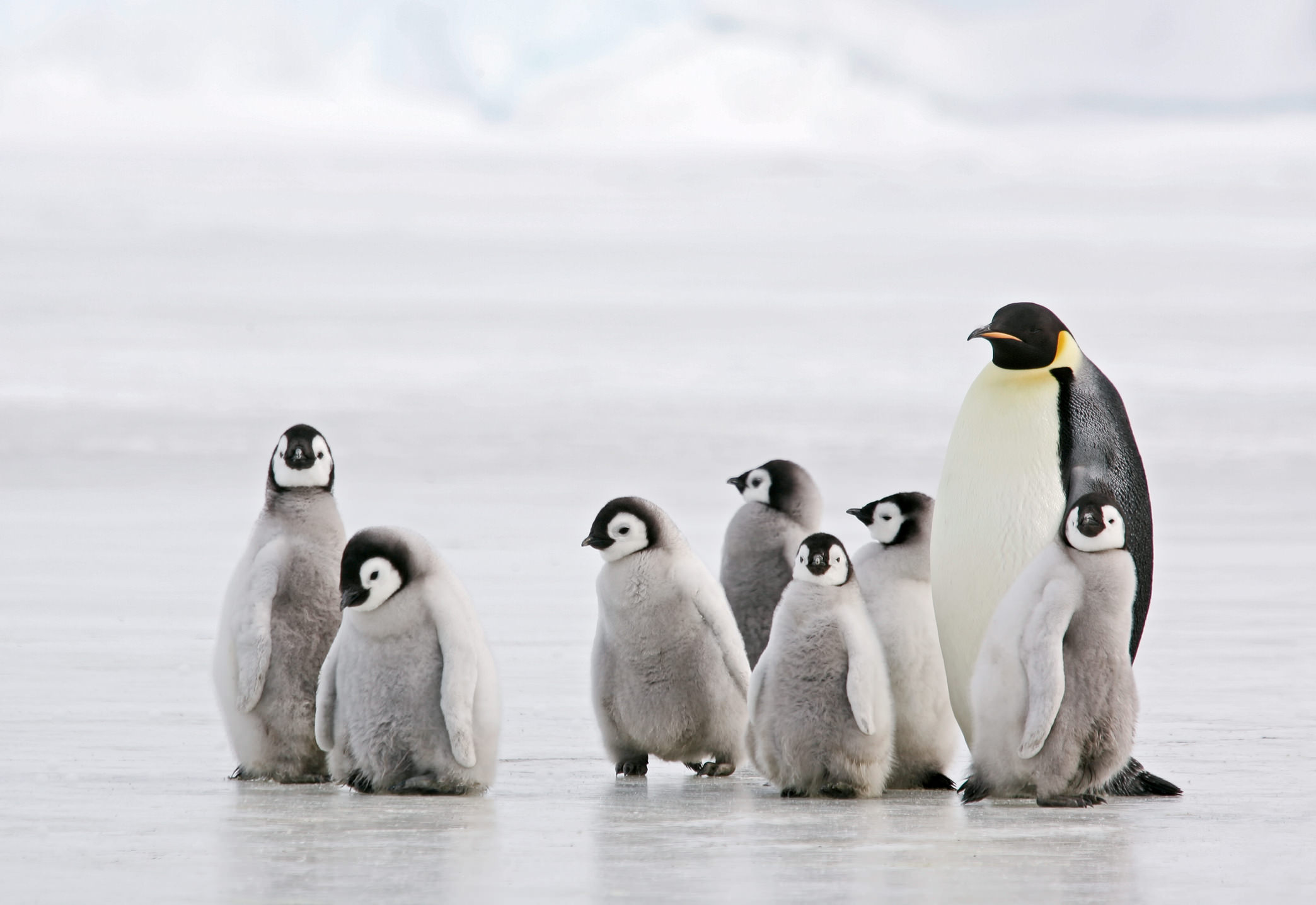 When the setting in which you shoot is devoid of much detail, as the one above, a good strategy is to try to photograph groups of birds. By doing so, you add more visual interest to the shot because there are more subjects with which the viewer can engage. In this case, with eight individual birds to interact with, the image becomes much more interesting. The linear arrangement of the penguins in a horizontal line also helps - it acts as a sort of leading line, taking us from one penguin to the next. 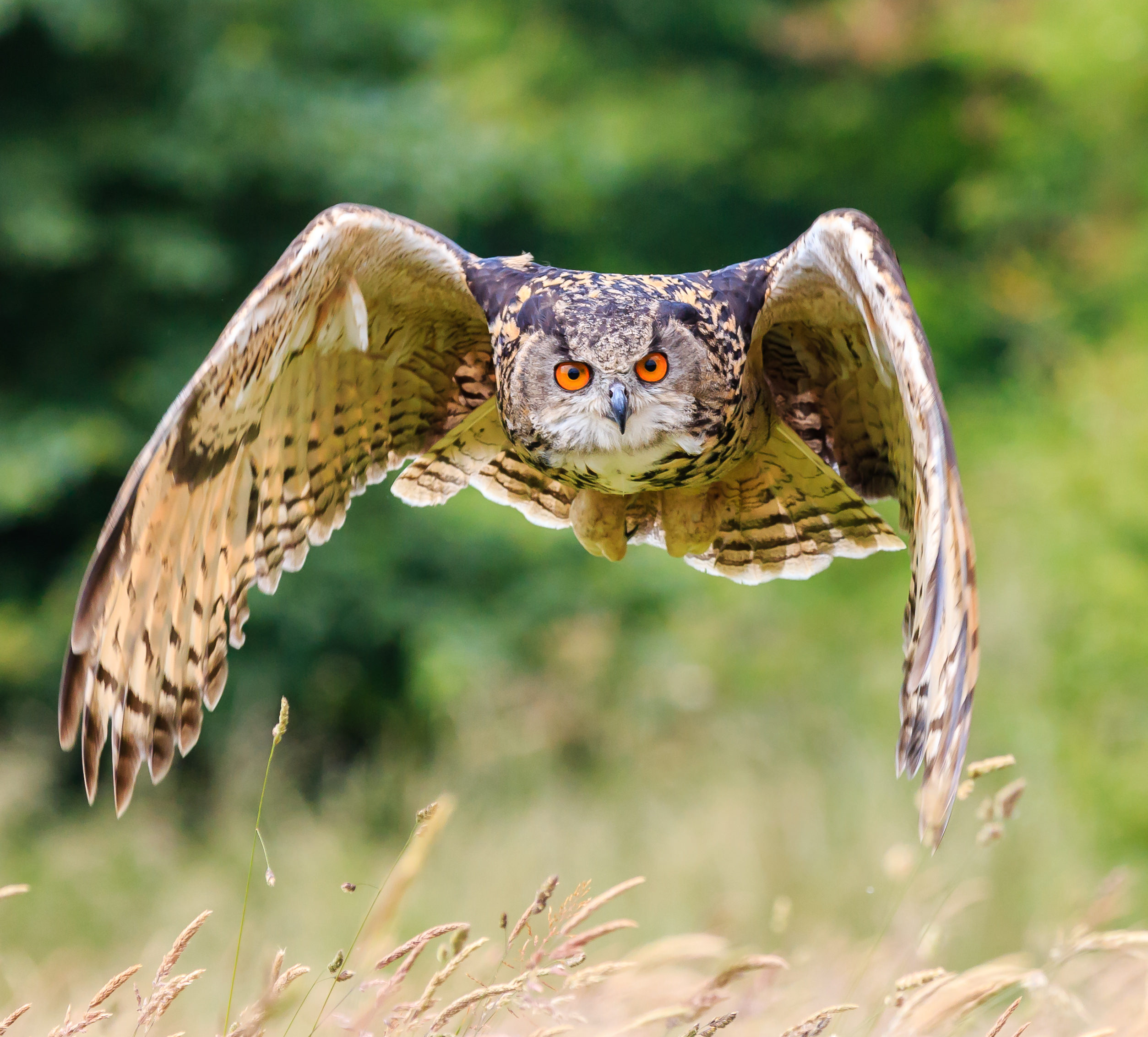 Much like photographing other wildlife, getting on the eye level of a bird can result in a much more engaging photograph. This, however, is easier said than done! But, as you can see in the image above, capturing a photo from a bird’s eye level - especially a bird of prey - gives you the opportunity to frame a shot that highlights the intensity with which the bird hunts. The key is to use a fast enough shutter speed to freeze the bird’s movement and to maintain focus on the bird’s eyes to keep them sharp. 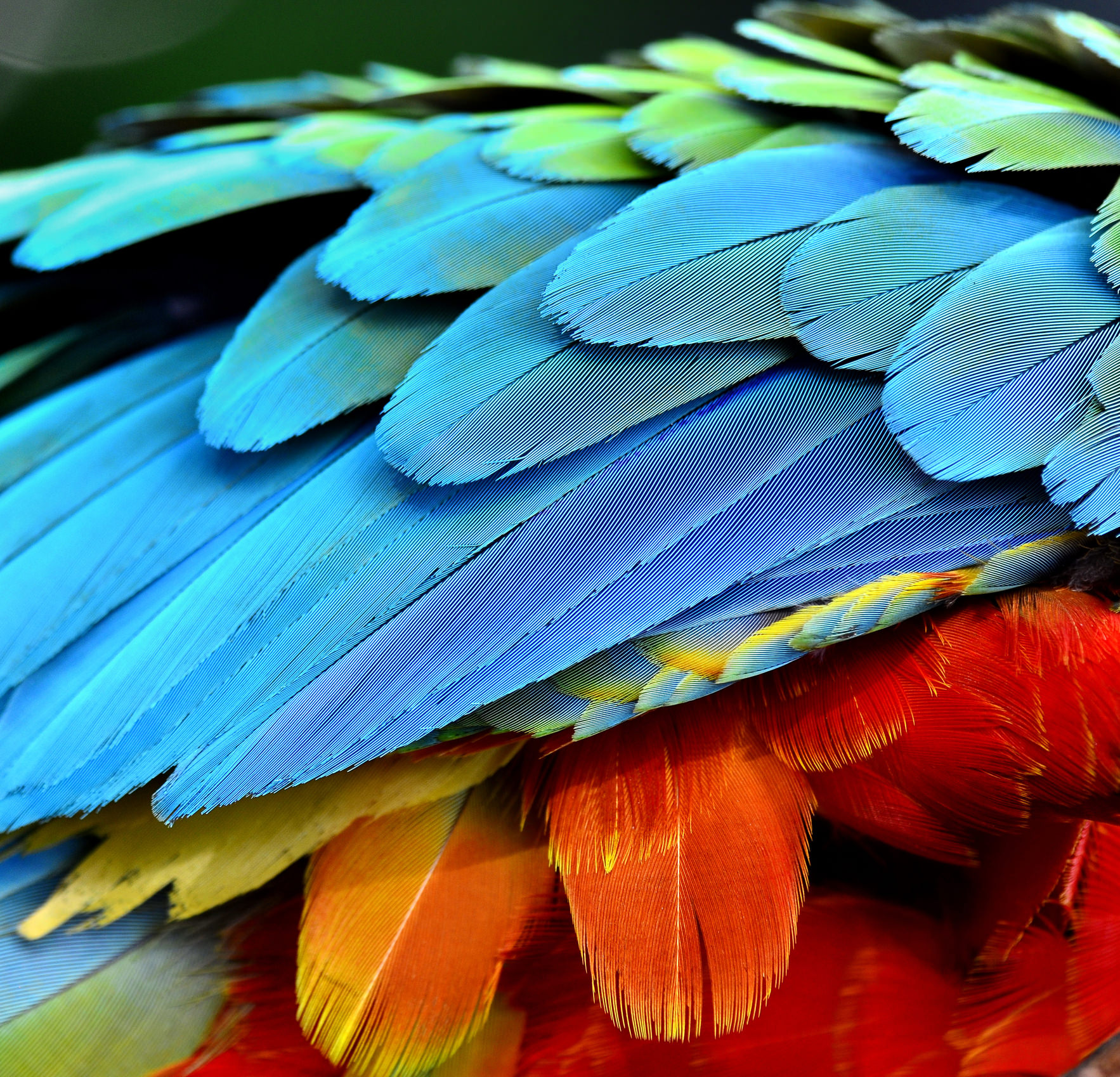 In this example, we see how not all bird photography has to include the bird’s face. When there is an abundance of color or texture, framing an extreme close-up can generate rewarding results. The colors of this macaw’s feathers certainly jump out at you, but also notice the intricate texture of the bird’s feathers. Note as well how they are layered, creating a good detail of dimension in the shot. 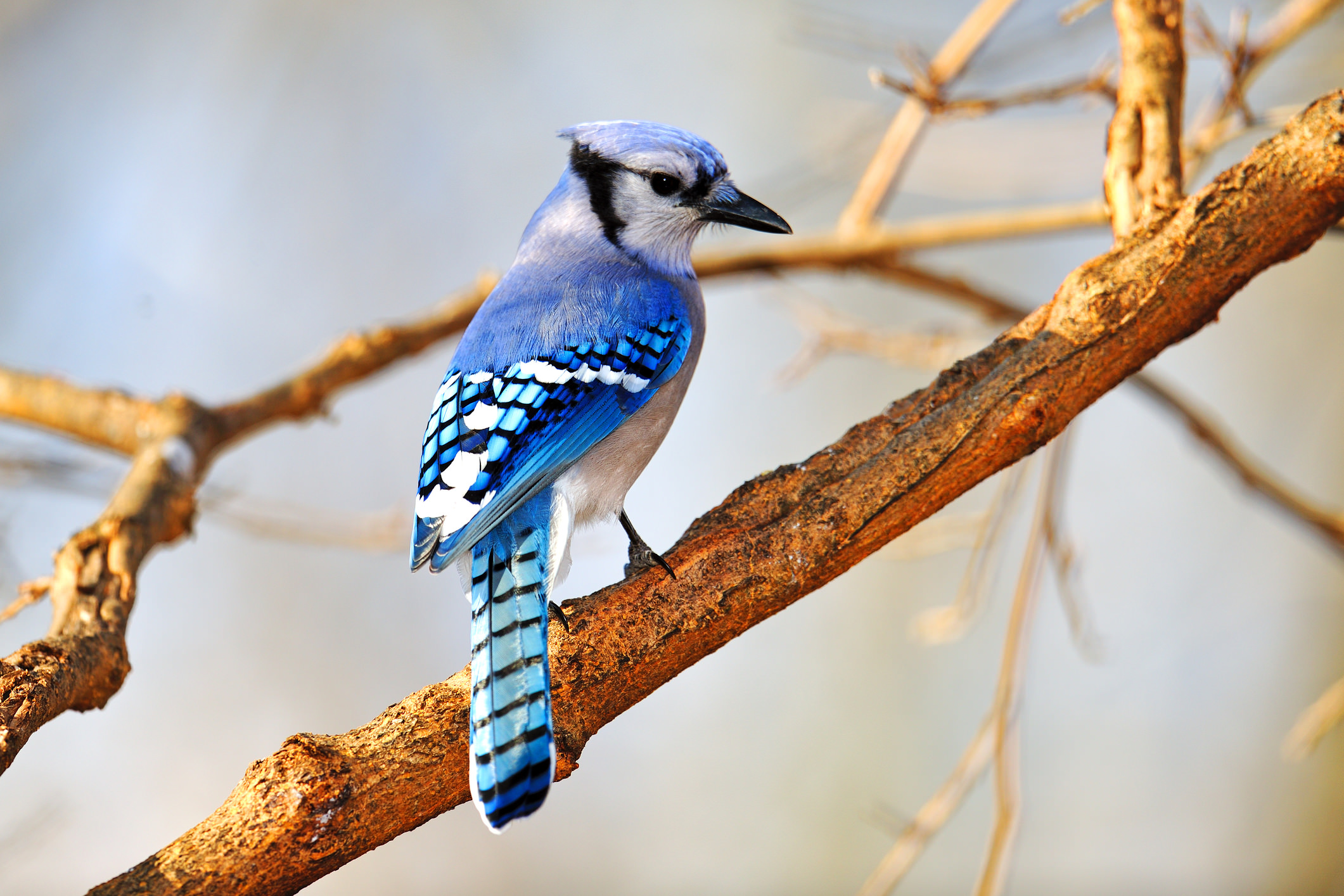 Though many bird photos show the bird from the front, don’t neglect taking a shot from behind the bird, especially if it’s hind feathers have beautiful details, as is the case with the blue jay above. Approaching a bird from behind might be easier, anyway, particularly if they are in the midst of an activity like feeding. Timing, as with virtually any photo of a bird, is everything - it’s advantageous to have the bird looking to the side so you can add their eye and beak to the photo. 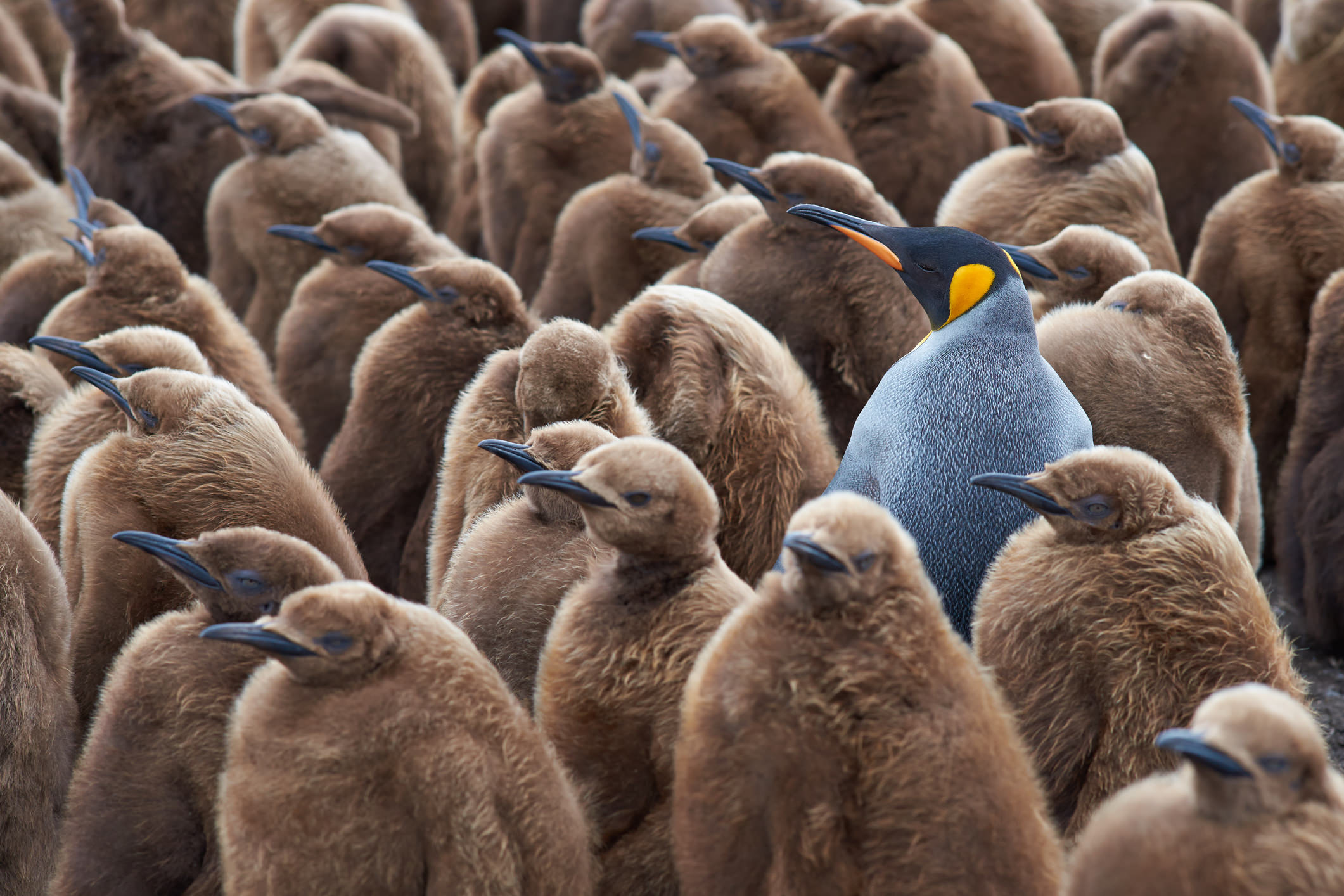 Again, we see how a large group of birds filling the frame can create quite a compelling image. Much like the pelican photo above, we have an interesting repeating pattern created by the penguins looking in the same direction. But, unlike the pelican photo, the addition of the older penguin with different coloring adds an additional layer of interest to the shot. But notice how despite its different appearance, the older penguin maintains the overall pattern by looking in the same direction as the other birds.