Could the Surface Studio Be the Game Changer Photographers Have Been Waiting For?

A lot of photographers have jumped on the Microsoft bandwagon as of late.

I know some who just love their Surface Pro and Surface Book, however feel the screens get cramped.

What about when you want a huge screen to view or edit your photos with ease?

If you’ve never seen one of these bad boys, it’s basically an all-in-one computer with a giant touch screen.

But, unlike other machines, the Surface Studio has an articulating screen - it can tilt downward to about 20-degrees so it turns into an almost horizontal display. If you don’t need that much leeway, it’s nice that the screen is easily manipulated to minimize glare.

That means you can more easily use your finger (or the included pen) to make pinpoint edits to your photos.

That’s just one of the Surface Studio’s awesome features. The question is, is it a game changer for photographers?

My vote it yes. Here’s why.

Use it as a traditional computer with a mouse or keyboard.

Touch the screen like a tablet for quick navigation through menus, precise writing or drawing, or making selections when editing your photos. You can even pinch to zoom and unzoom which makes the time-saving shortcuts on a Mac seem woefully outdated.

The included pen works just like it does with other Surface products, giving you a precision tool for tackling any photography-related task, like creating masks or using the lasso tool.

The Surface Studio also has something called the Surface Dial. Essentially, the Dial is a shortcut that allows you to move from one tool menu to the next with lightning speed.

Need to change the size of the brush in Photoshop? Done. Alter the color of the pen. Easy.

Better still, the Dial isn’t just a handy tool that sits on your desk. It also interacts with the screen, meaning, you can use it to bring up the tools you want to use, which can then be selected using your mouse, pen, or finger. Watch it in action in the video above.

I think you’ll agree - that’s an incredible range of inputs that will make your workflow easier and smoother. 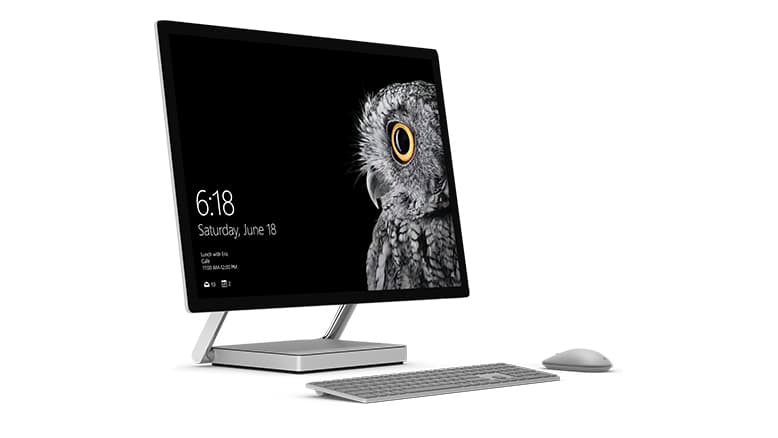 If a 28-inch touchscreen-enabled, 4.5K PixelSense display doesn’t get you excited to edit photos, I don’t know what will.

Yes, the Surface Studio’s screen is massive, making editing (and daily business tasks, for that matter) a pleasure. It’s got a tiny bezel, so when you put your images into full screen mode, it really does fill up all of that 28 inches of real estate.

But the quality of the screen is worth noting too.

It’s 3:2 display is ideal for viewing and editing photos. With 13.5 million pixels and 192 PPI with 10-bit output, it’s nearly on par with the iMac with the 5K Retina display. Better still, the Surface Studio’s display sports the expanded DCI-P3 gamut, which is 25 percent larger than sRGB. That’s a big deal because the colors will display in a more true-to-life form. 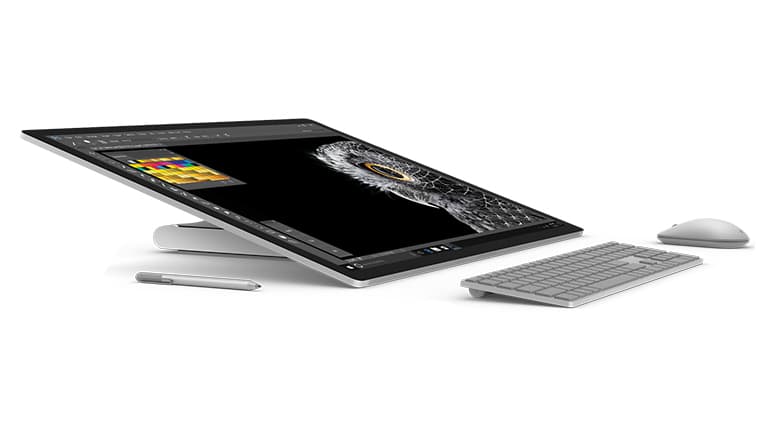 Of course, where the Studio shines is in the touch-enabled display. As noted above, you can use your finger, a Surface Pen, or the Surface Dial as input devices for a virtually seamless interface that offers photographers greatly expanded capabilities when it comes to post-processing images.

And those capabilities are sure to get better and better, as Microsoft has made development of Dial and Pen apps extremely easy. Expect to see things like Photoshop and Lightroom add actions for these inputs to give you even more imaging power.

In short, the Surface Studio makes using a mouse or tablet input look like something out of the last century! 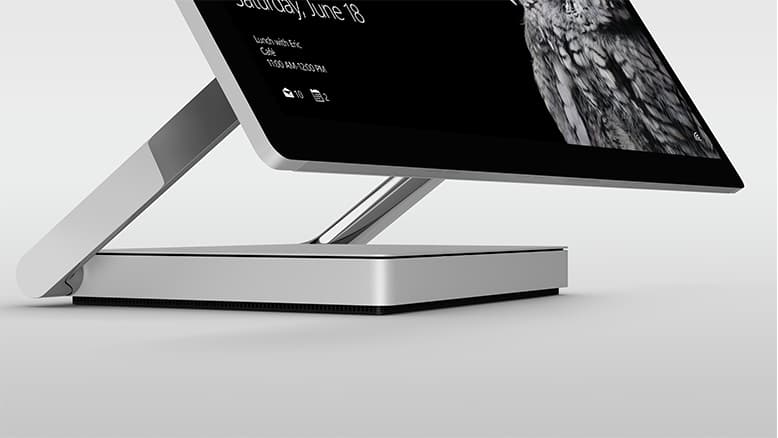 What photographers need in a computer is something that will handle the intensive tasks of post-processing and video editing with ease.

The Surface Studio certainly does so.

In a phrase, it’s the most powerful Surface Studio yet (and one that’s packed into a tiny package, as seen in the image above). It’s also one that’s clearly designed to offer performance that will fight the Macs of the world for the attention of creative professionals like photographers.

The Surface Studio has other functional specs that make getting your work done a smoother process:

Also included are dual microphones and a 5MP/1080p front-facing Windows Hello capable camera for consulting with clients from afar. You can even jam to some tunes using the Studio’s 2.1 Dolby Audio speakers.

That means you can be productive and have fun at the same time. Sounds like a nice day at the office to me!

It’s beautiful. Functional. Undeniably well featured. The Surface Studio can certainly be any creative professional’s go-to computer. Just watch the video above to see what I mean.

The gorgeous, large, and easy-to-use touch-enabled screen by itself is enough to make this computer a game-changer for photographers. Having the ability to switch from vertical view and using “traditional” tools like a tablet or mouse to do your work, then switch to near horizontal view to get into the nitty gritty with a Surface Pen or your fingers is, in a word, incredible. And who can argue against the value of seeing your photos on an enormous 28-inch 4.5K screen?

Once Adobe (or someone else) starts producing post-processing apps that are optimized for the Surface Studio, look out. With Surface Pen and Surface Dial-enabled processing, this will perhaps be the most powerful tool on any Photographer’s desk.

Now, will the Surface Studio’s massive list of features be something that the casual photographer needs? No. Will it be something that professionals that only minimally process their photos in Lightroom need? Probably not.

But for those of you that specialize in portraiture, landscapes, and other genres that typically involved a good deal of post-processing, the Surface Studio is something that will make you absolutely drool. Is it a game changer? I think so!