11 Macro Photos That are Out of This World! 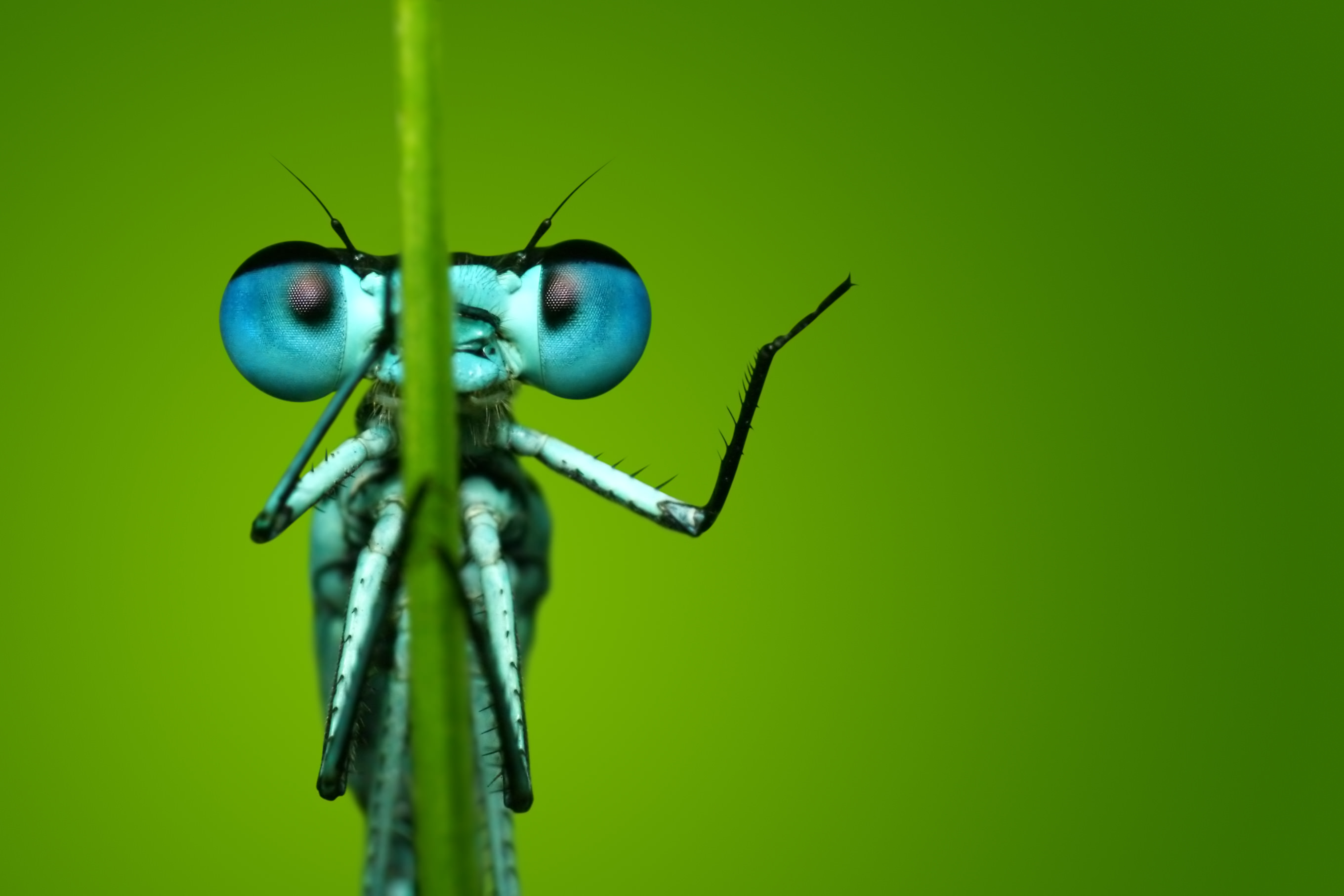 I'm guilty of not always appreciating the beauty around me.

And I don't mean the big stuff like mountains or the beach...

I mean the unseen world that goes on outside our normal realm of view, like the featured image above.

Just look at that!

Who knew dragonflies are so cool looking up close?

Especially this one, which seems to be waving at us!

This image shows that if you take the time and put forth some effort, you can create a stunner of a photo with a subject that might otherwise go unnoticed, even if you're a beginner macro photographer.

Let's have a look at even more incredible examples of macro photos that are totally out of this world. 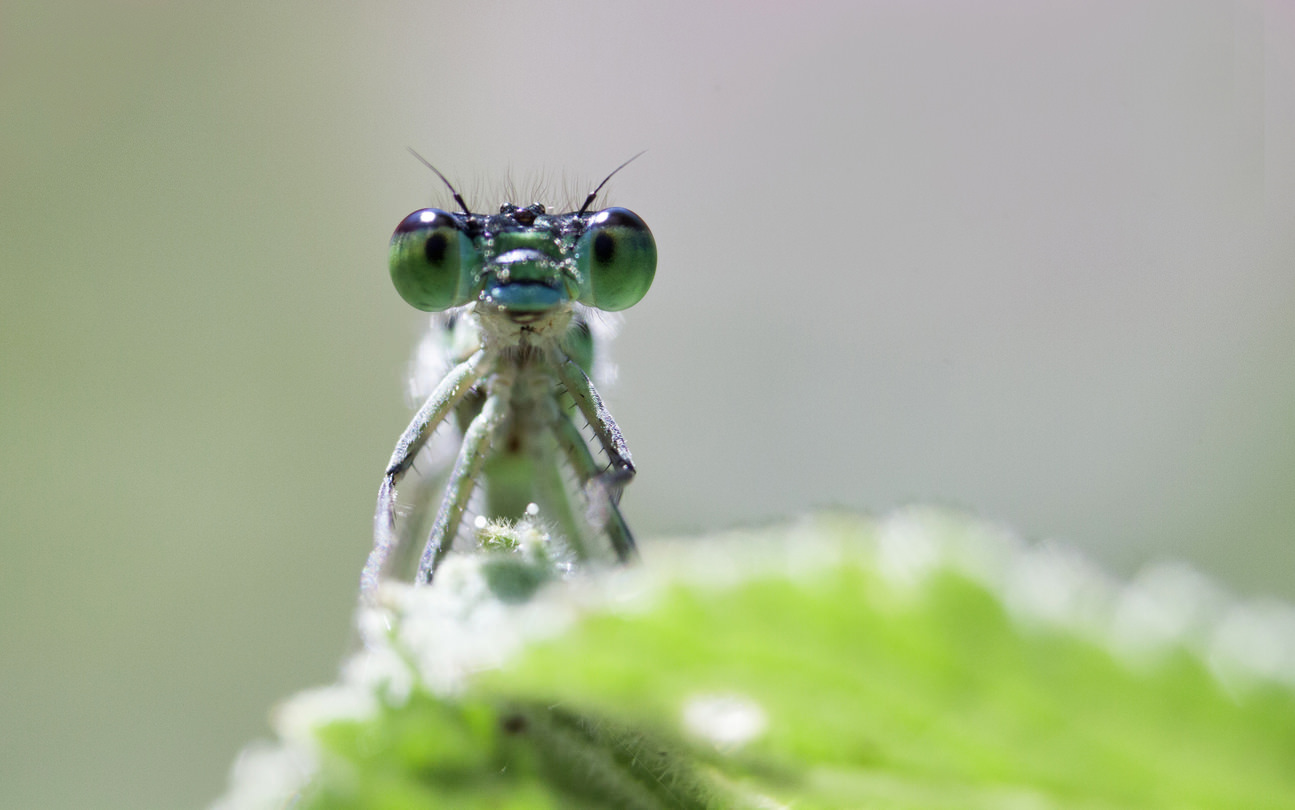 Just like any portrait, in a macro shot of an insect like the one above, the eyes have it.

You have an incredibly small depth of field when working so up close, so you have to be selective in terms of what's in focus. One look at this image and you can see just how shallow that depth of field really is.

By focusing on the eyes, you give the viewer something to zero in on.

Just like in a portrait of a person, having the eyes nice and sharp helps the viewer connect with the subject.

Note as well the little hairs on this insect's head. It's those fine details - along with tack-sharp eyes - that really make the shot. 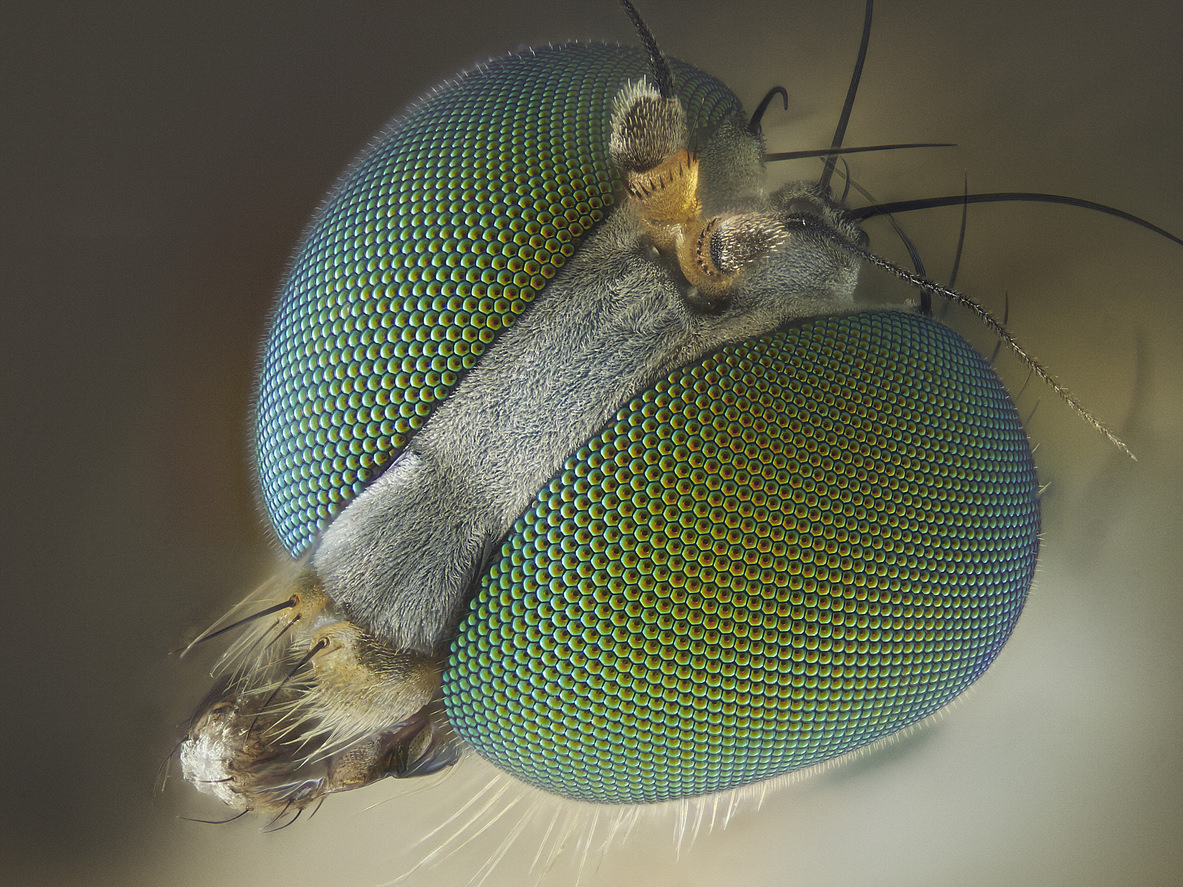 After seeing this photo, the next time I have a fly in the kitchen, I might just try to take its photo rather than swatting the life out of it.

Here, we see the value of working in macro, with the insane detailing of the fly's eyes on full display.

As if the texture and coloring of its eyes weren't enough, the whiskers on its nose and head add an incredible level of detail to this image too.

Notice the very tight crop as well. In this case, the photographer framed with purpose - it looks intentional. That is, there's no question that the photographer wanted to get as close in on the fly's eyes as possible.

Just as you do when you crop a portrait, if you're going to crop tightly, crop very tightly so viewers understand it's not a mistake. 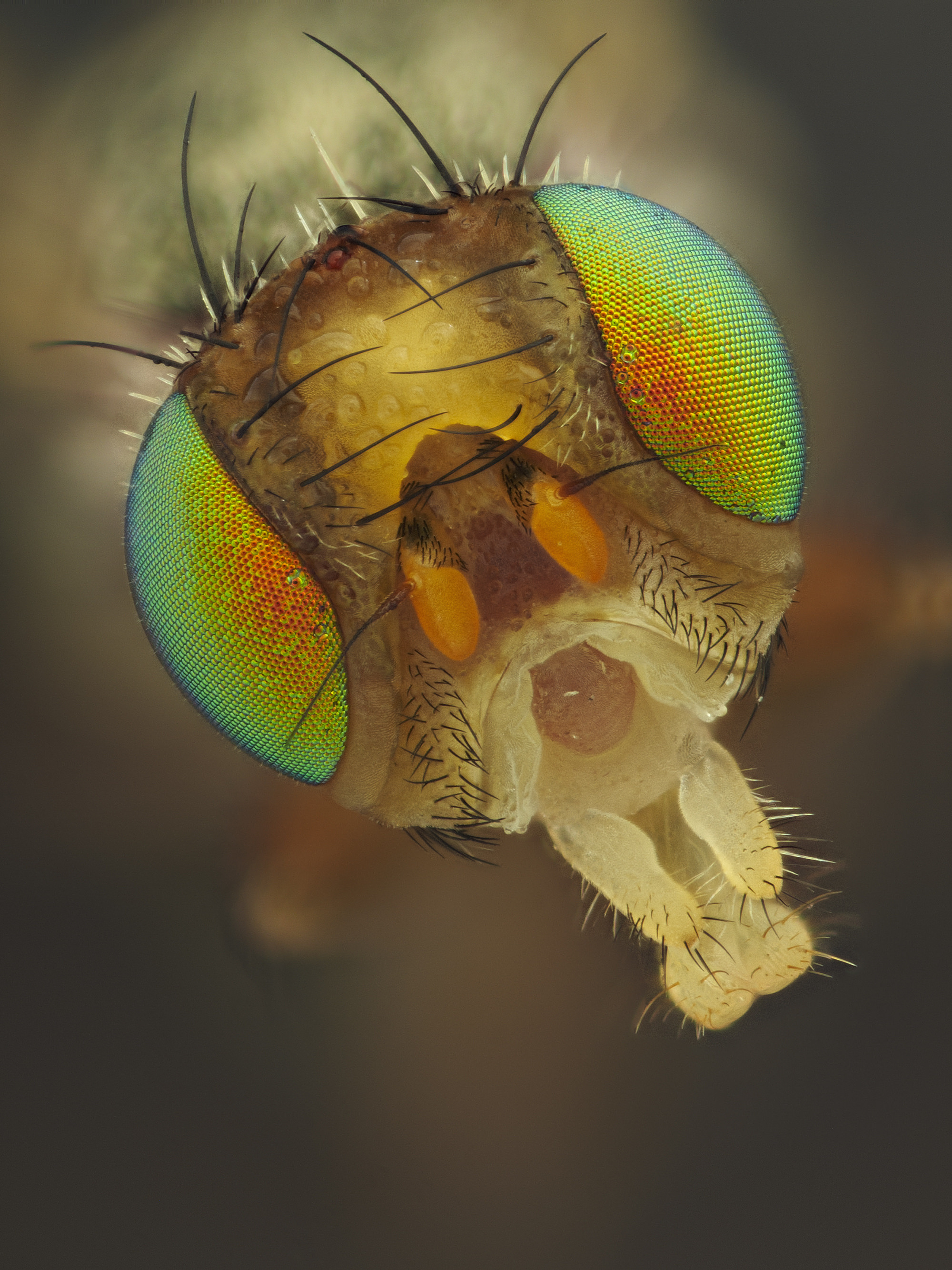 Here again, we have another prime example of how a macro shot benefits from maintaining focus on the eyes and having a very tight crop on the insect.

Unlike the previous image, this one takes a more frontal view so the mouth of the fly is on full display.

It looks like something out of one of the Alien movies, right?!

Here, the depth of field is large enough that the photographer was able to keep the fly's eyes, face, and mouth in perfect focus.

When framing up shots like this, it's important that you use live view to zoom in on the subject to check focus - if the insect stays put long enough, that is! 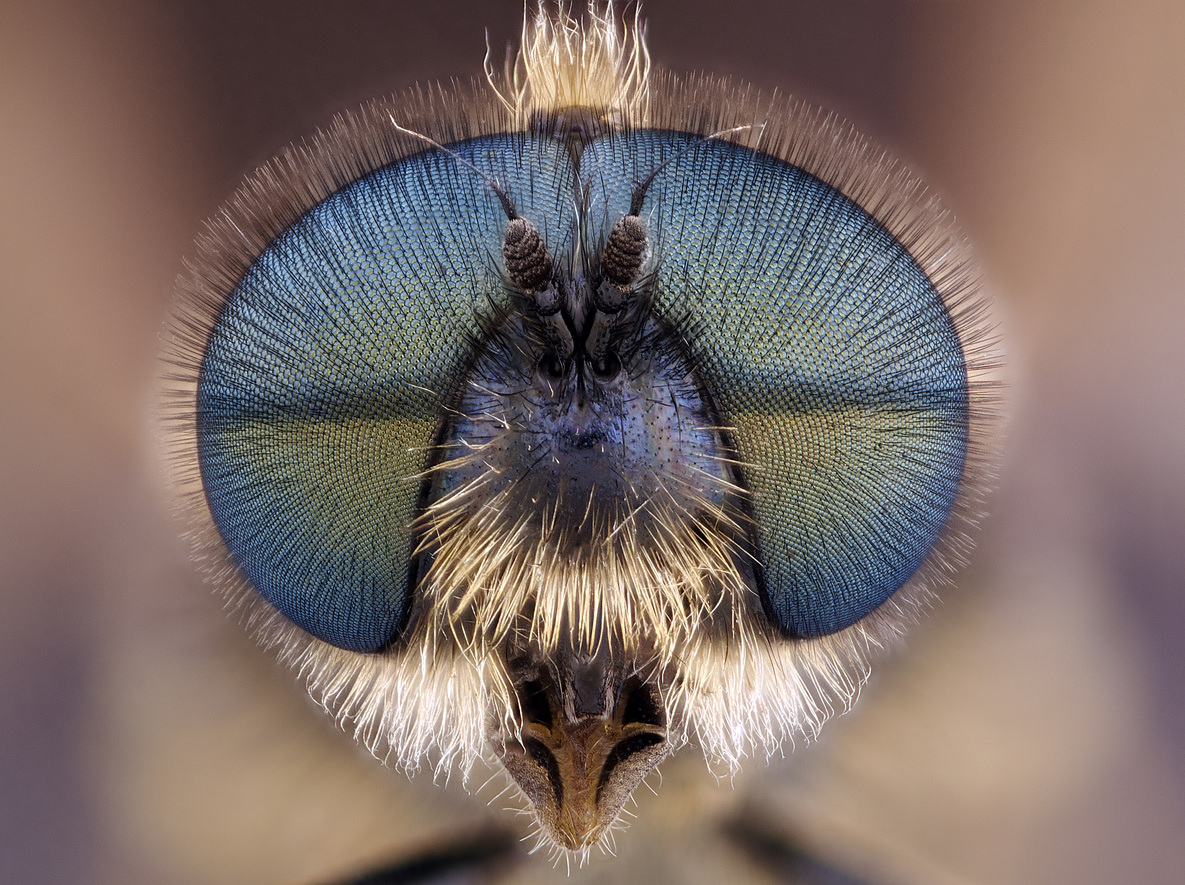 Like any other photo, when creating something in the macro realm, it's important to understand the applicable photography rules of thumb to get a pleasing shot.

For example, in the image above, the fly benefits from nice, even lighting that allows the photographer to put the detail of the fly's face on full display.

Likewise, the photographer uses depth of field to their advantage, throwing the background out of focus so our eyes don't stray from inspecting the incredible level of detail of this insect.

Note also that some rules of photography can be cast aside. In this shot, the fly is positioned in the middle of the frame - a clear violation of the rule of thirds. Yet, it makes the image better to break the rule.

When composing your macro shots, keep all those photography rules in mind, but don't be afraid to be a rule breaker either! 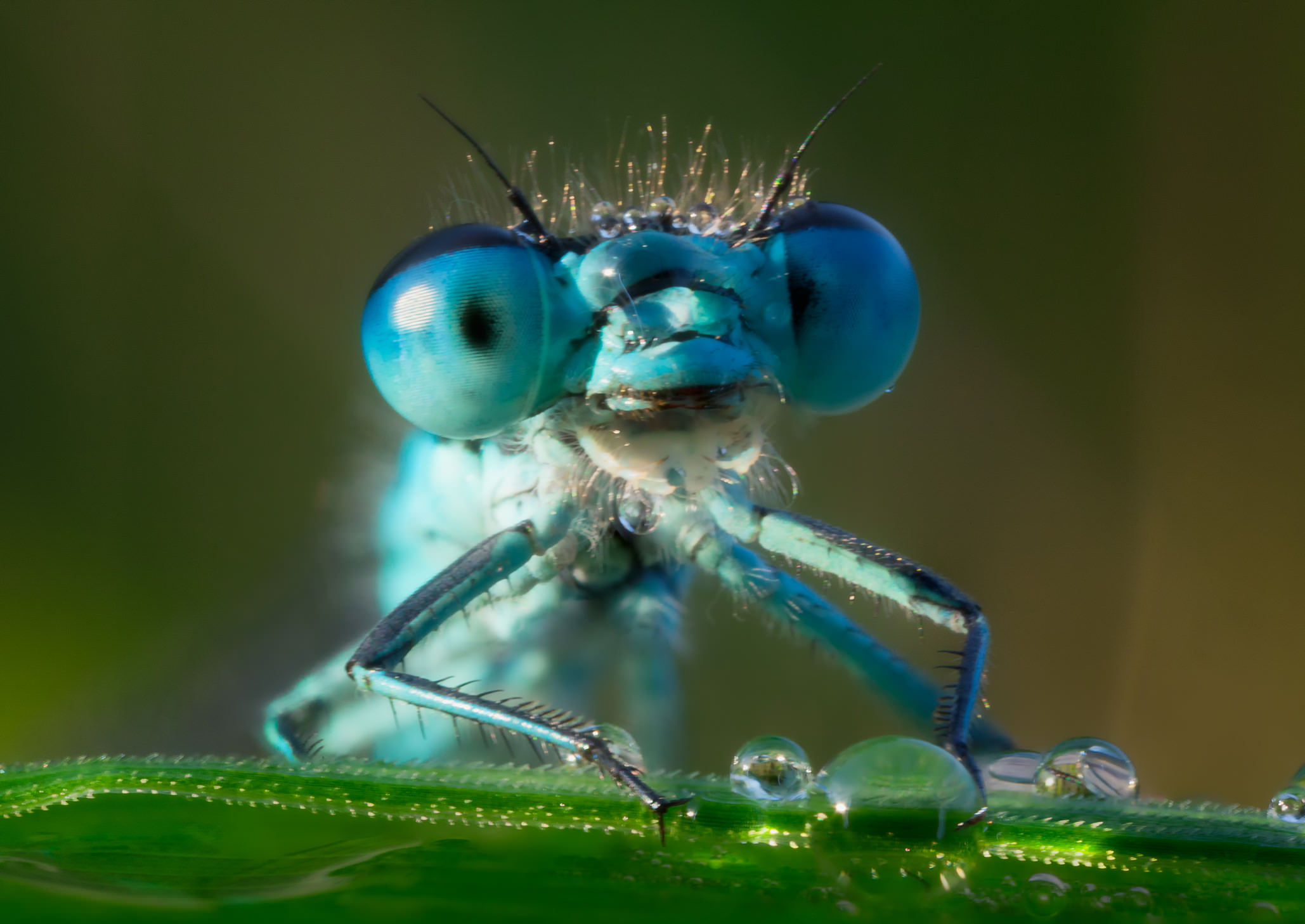 Though insects have an astounding amount of detail in their eyes and bodies that make for excellent subject matter in a macro shot, it's worth adding in "props" sometimes, just to give your macro images a little more visual interest.

In this example, the dragonfly certainly delivers with its eyes, legs, and the coloring of its body.

However, the shot is really made with the inclusion of the "props" in the foreground. The single blade of grass and a few drops of dew give the image a bit of context and additional depth.

Likewise, the softness of the dew drops contrasts nicely with all the harsh lines in the shot while also mimicking the roundness of the dragonfly's eyes. Those kind of repeating elements make the image much more pleasing to view. 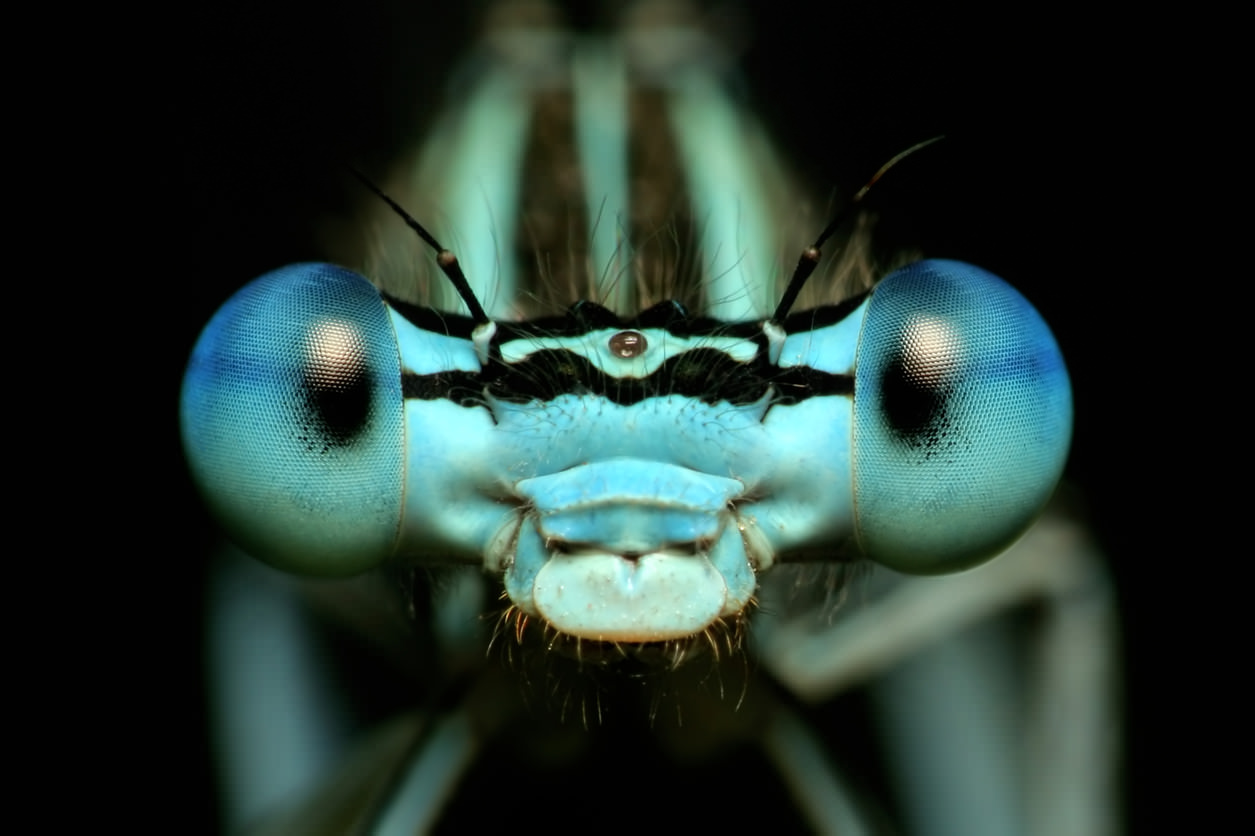 This is another ideal example of how a tight crop on an insect's eyes can make the image completely transformative.

Again, the detail of the eyes and the body of this dragonfly give this photo an otherworldly vibe, as though we're looking at an alien lifeform that is set to jump off the screen and attack!

When composing shots like this, it's important to consider the background. As noted earlier, the depth of field is so razor thin that the background will certainly be out of focus in a macro shot.

However, you still need to ensure that the background doesn't have any crazy textures or colors that will distract the viewer's eye from the subject. In this case, a dark, black background is a perfect canvas upon which to feature this dragonfly. The shape of its body and its gorgeous blue color really pop on such a dark backdrop. 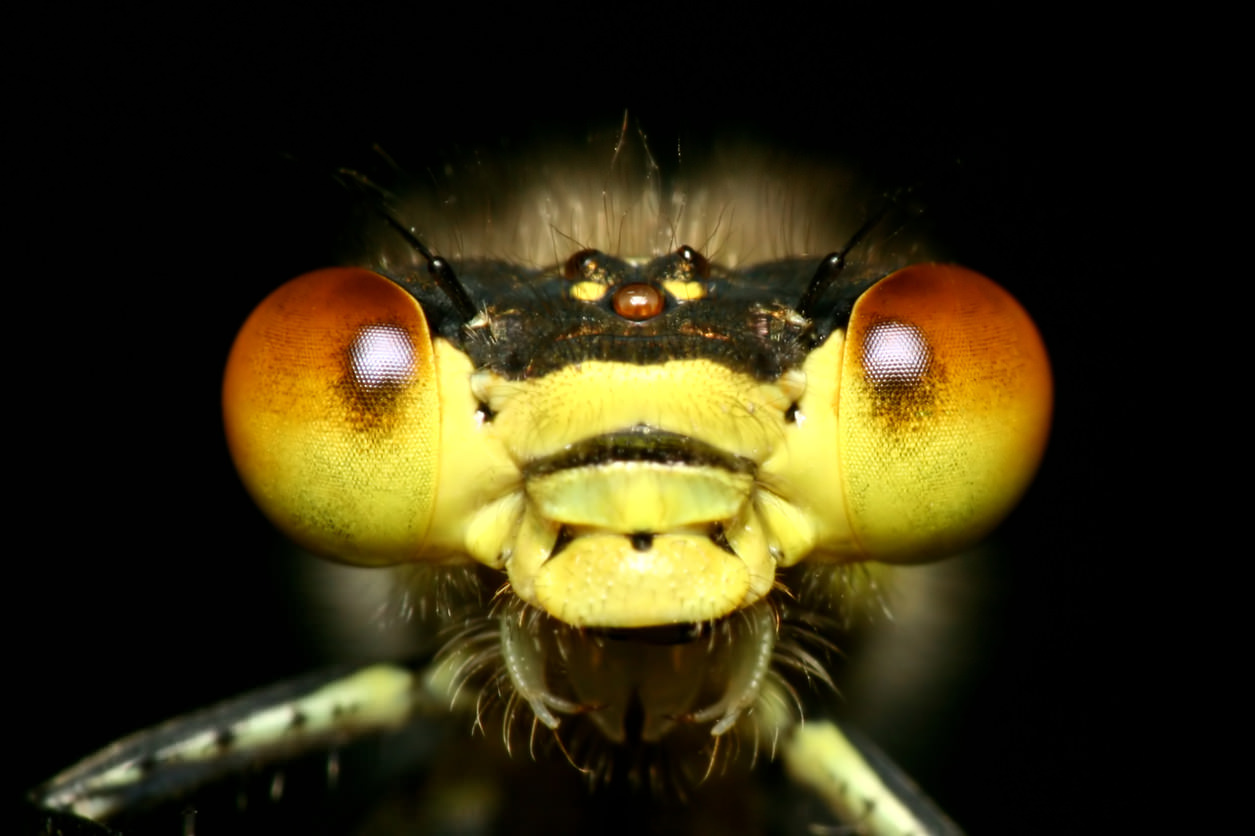 Here, we see again how the tightly framed shot of an insect on a dark backdrop really makes the details of the insect come to life.

Something else that aids in this is the use of the right lighting.

The right lighting means different things to different people in different situations. In some of the images in this article, natural lighting was used. In others, like this one, a front-facing light was used to illuminate the dragonfly with clean, even, bright light.

In other cases, you might find that you need two lights or perhaps a ring flash attached to the end of your lens.

The point is that you might need to experiment with a few different lighting setups to determine which one best fits in with your workflow and the aesthetic you're going for in your macro images. 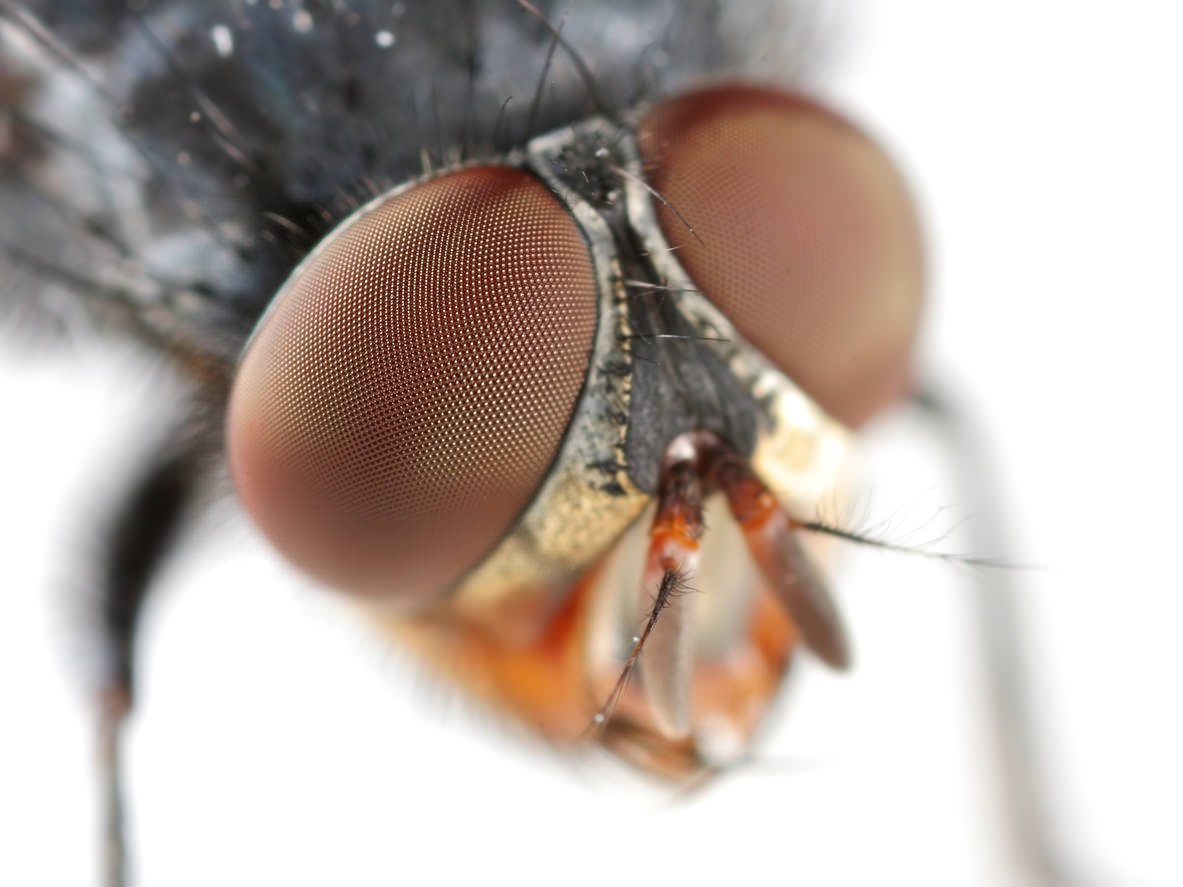 This close-up of a fly demonstrates perfectly how you have to select your focal point very, very carefully.

Note how the eye on our left is in focus, but the eye on our right is not. That's because, at this distance, the depth of field might be just a few millimeters deep.

That means that sometimes you have to choose which eye is in focus or if you place the focal point somewhere else, like right between the insect's eyes.

Like the previous two images, again, we see how a non-descript background aids the viewer in getting the full preview of the insect's features. In this case, the white background gives the image a feeling of lightness and airiness, which, in turn, makes this photo seem a little less alien like and scary. 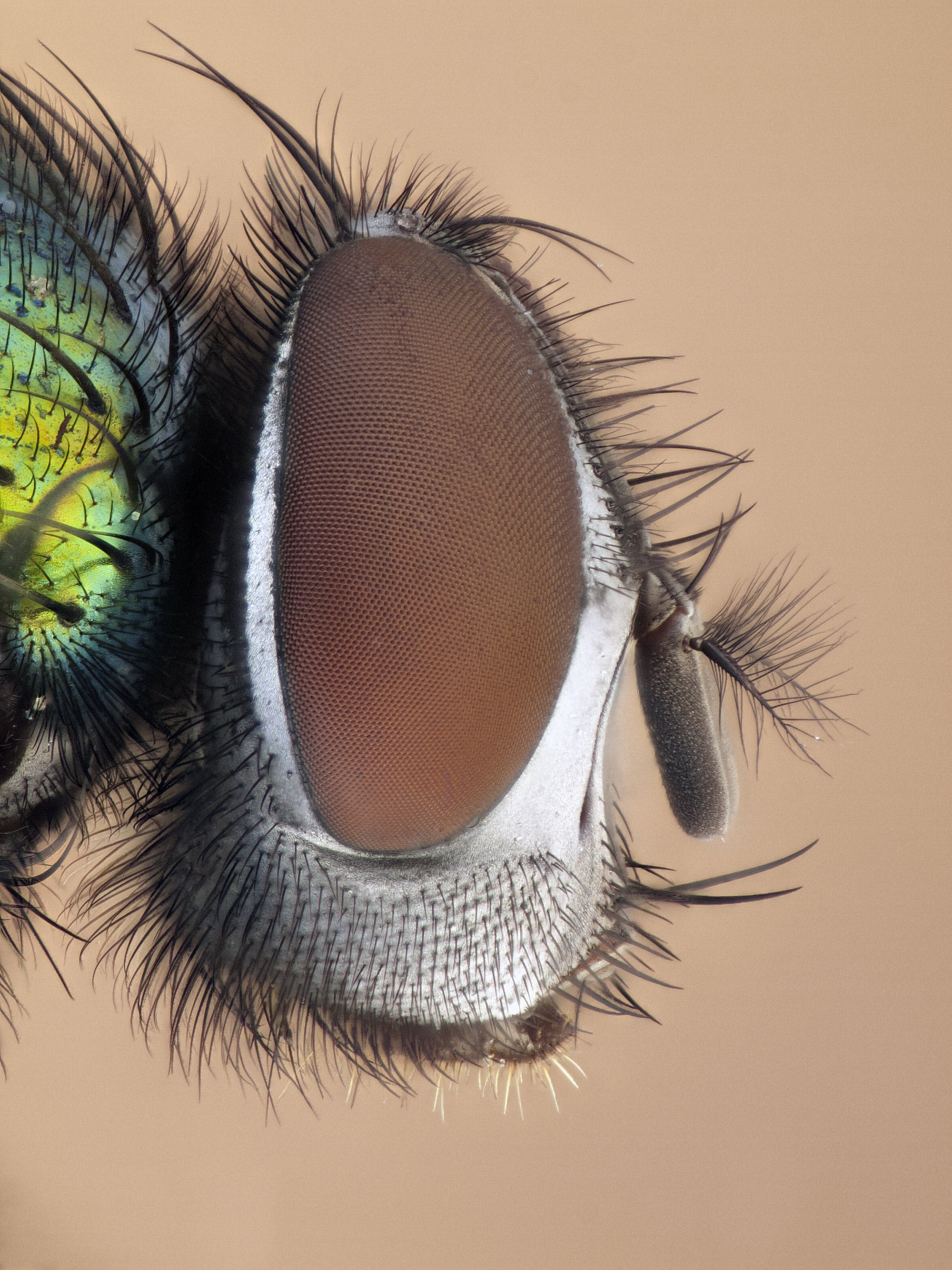 Not all macro photos of insects have to be from a front-facing view.

As we see in this gorgeous example, a profile shot can actually prove to be far more interesting for the viewer's eye.

I mean, just look at all the detail to delight our visual senses - the coloring and texture of the eye, the abundance of razor-sharp whiskers, and what appears to be a nose that juts downward from the insect's face.

I'm no insect expert, but I know a gorgeous shot when I see one. I think this one certainly qualifies!

When creating macro shots, go for a little variety and change up the perspective from which you shoot. It's a good rule of thumb taken from other kinds of photography that will help you generate a series of photos that offer unique perspectives of the same subject. 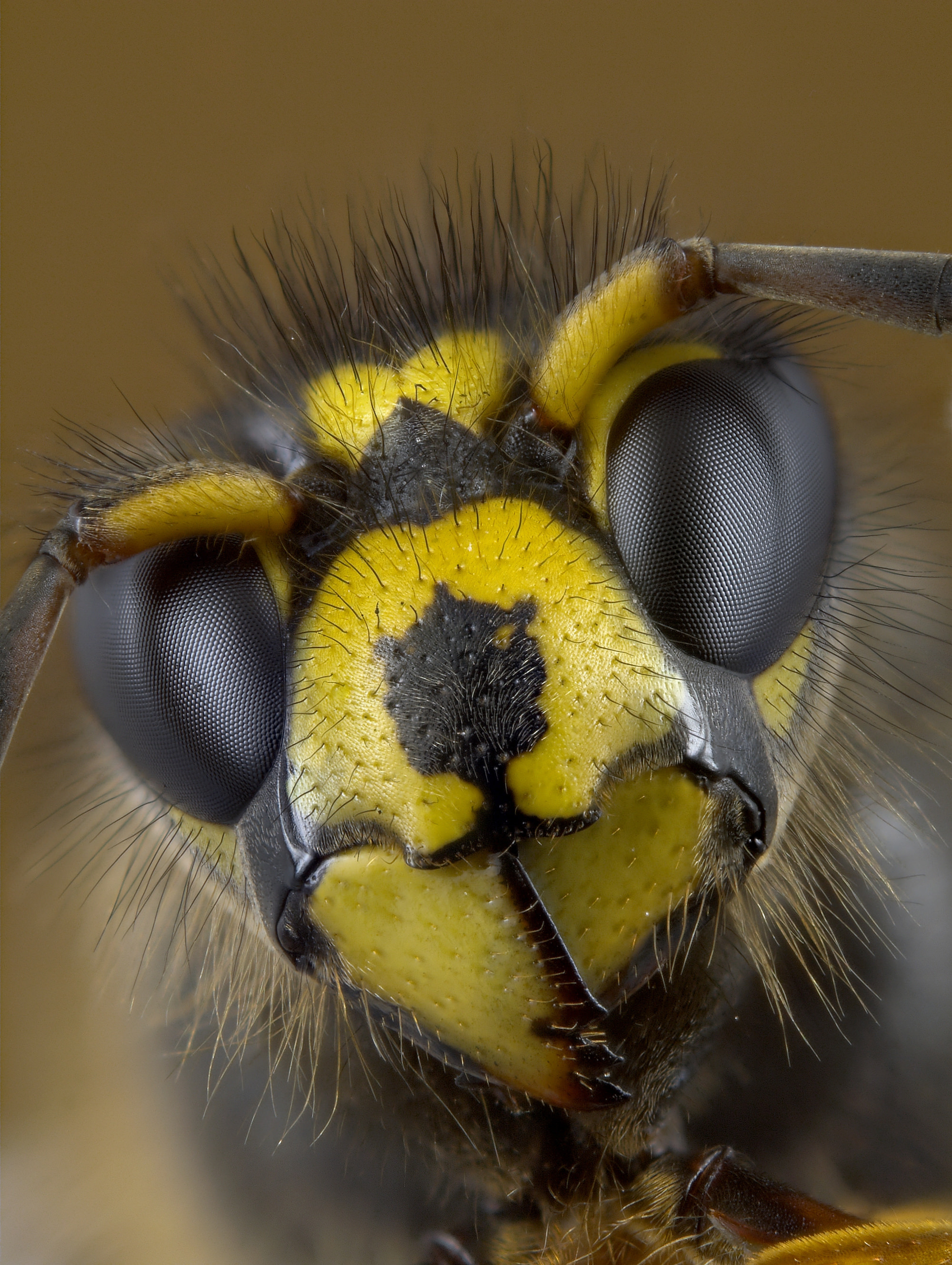 Wasps are a prime target for macro photography because of their interesting coloring.

Here, you see the same concepts at work discussed in other examples above - tight framing, even lighting, and perfect focus on the insect's eyes.

But with this wasp, we get the added visual pleasure of the pattern created by its yellow and black coloring.

I don't know if that black spot in the middle of its face is a nose, but it sure looks like it! And combined with the sharpness of detail of its whiskers and antennae, this is one macro image that packs a strong visual punch.

As we've seen in each of the photos here, macro work relies on many of the same compositional and technical tricks that you rely on to take any other kind of photo. The only difference, of course, is that you're working in very close quarters with a specialty lens (or, at the very least, add-ons like extension tubes) to get the shot.

Nevertheless, framing, composition, focusing, and lighting remain the hallmarks of a good photo whether you're taking a portrait of your kid or a portrait of a fly. If anything, these photos show that macro photography isn't as scary as you might think, even if some of the subjects you encounter might look like they're from another world!