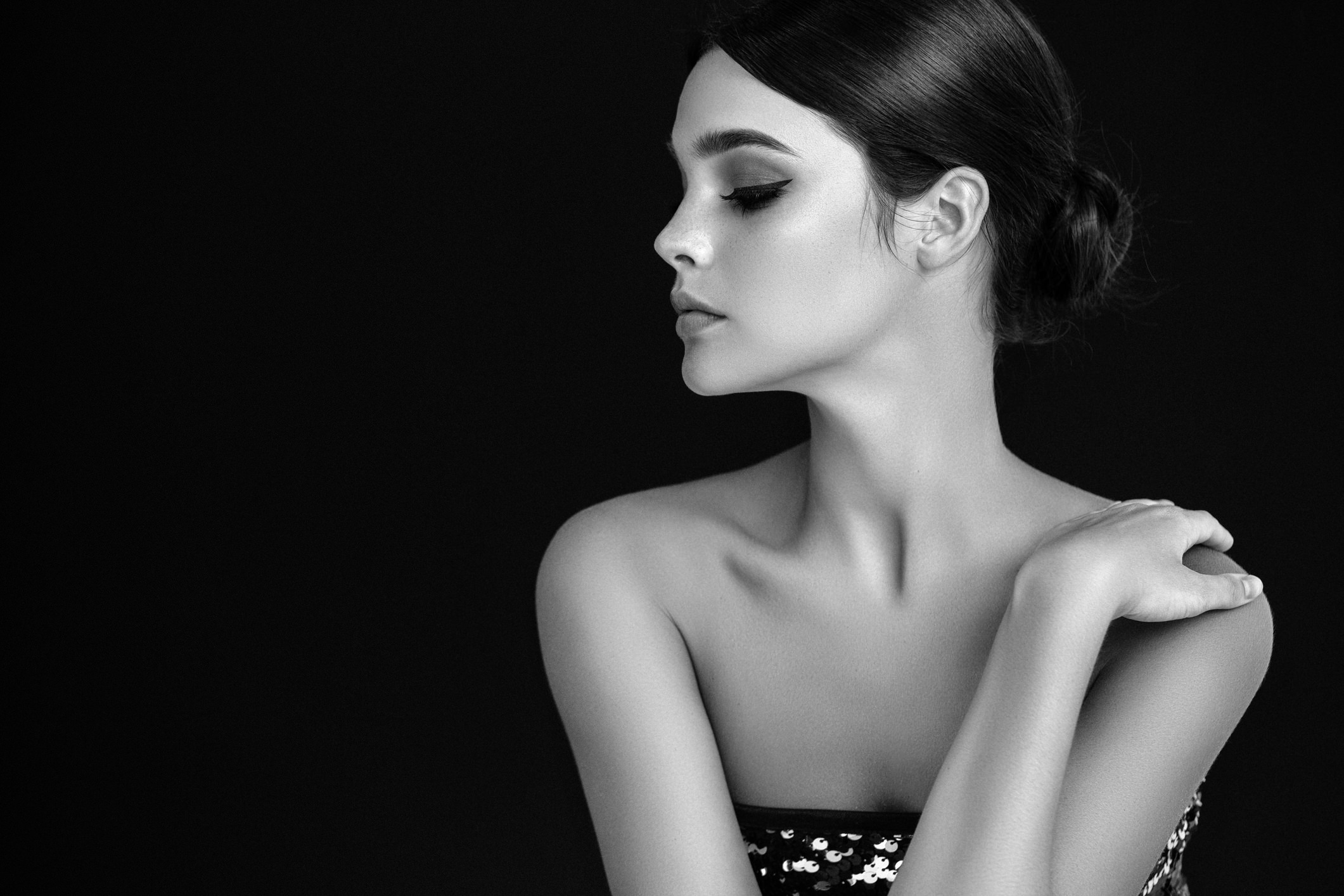 There's just something about black and white photos that exude class and sophistication.

That's on full display in the featured image above. The woman would be beautiful in a color shot too, but in black and white, the lines of her body, the contrast of her pale skin against the dark background, and the soft, even lighting turn this into a show-stopping photo.

Granted, not all black and white photos are winners, and unlike some photographers think, black and white shouldn't be the go-to treatment to try and rescue images that are poorly lit, not composed well, or suffer from some other malady like blurriness.

That means that though black and white photography can be more forgiving, it shouldn't be treated like a rescue project for bad photos.

Instead, with the right approach and preparation, black and white photos can turn into gorgeously elegant shots, no matter the subject.

Let's examine a few black and white photos to see this elegance in action. 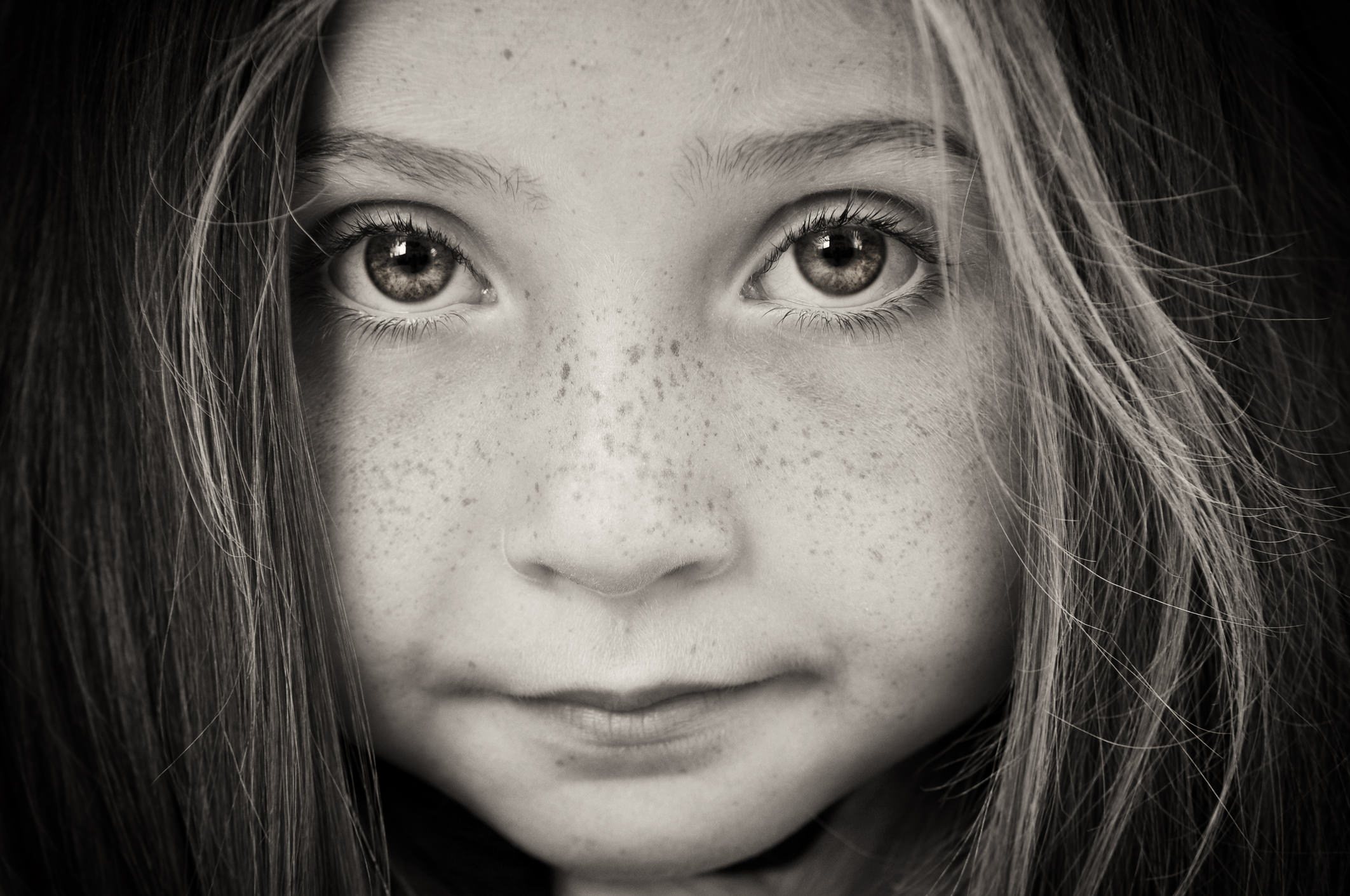 There is elegance in simplicity, and this portrait of a little girl demonstrates that concept well.

Not only does the close-up view of her face put the fine details of things like the texture of her hair and her freckled skin on full view, but the black and white conversion serves to make those details stand out even more.

Even her eyelashes take on more prominence without the distraction of color to take the eye away from the abundance of textures and shapes in this portrait.

This image also shows how a lower contrast black and white image can be quite fetching. Note that there are still bright whites and dark blacks, but that they take a backseat to the abundance of middle grays. The result is a feeling of calm and serenity that jives well with the sweet innocence of the little girl. 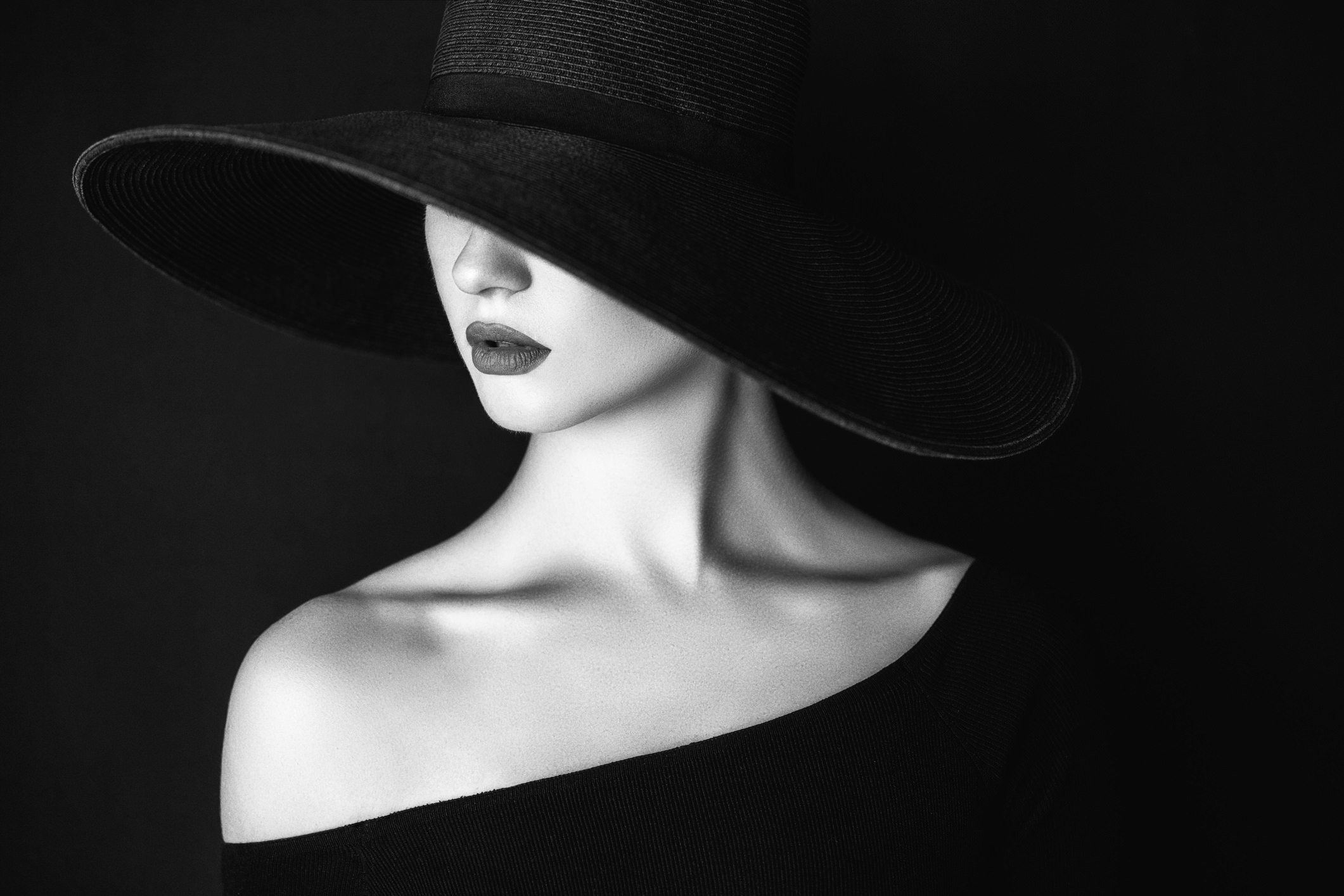 Then again, there is something to be said about the visual impact of a portrait with greater contrast.

Like the featured image, the image above benefits from strong areas of light and dark, giving the portrait a sophisticated, high-fashion look.

In this instance, the lines created by the model's dress and hat help accentuate the richness of the shot.

Often, using lines in black and white photos is a primary tool for incorporating more interest. In this case, those lines also help elevate the image in terms of elegance. 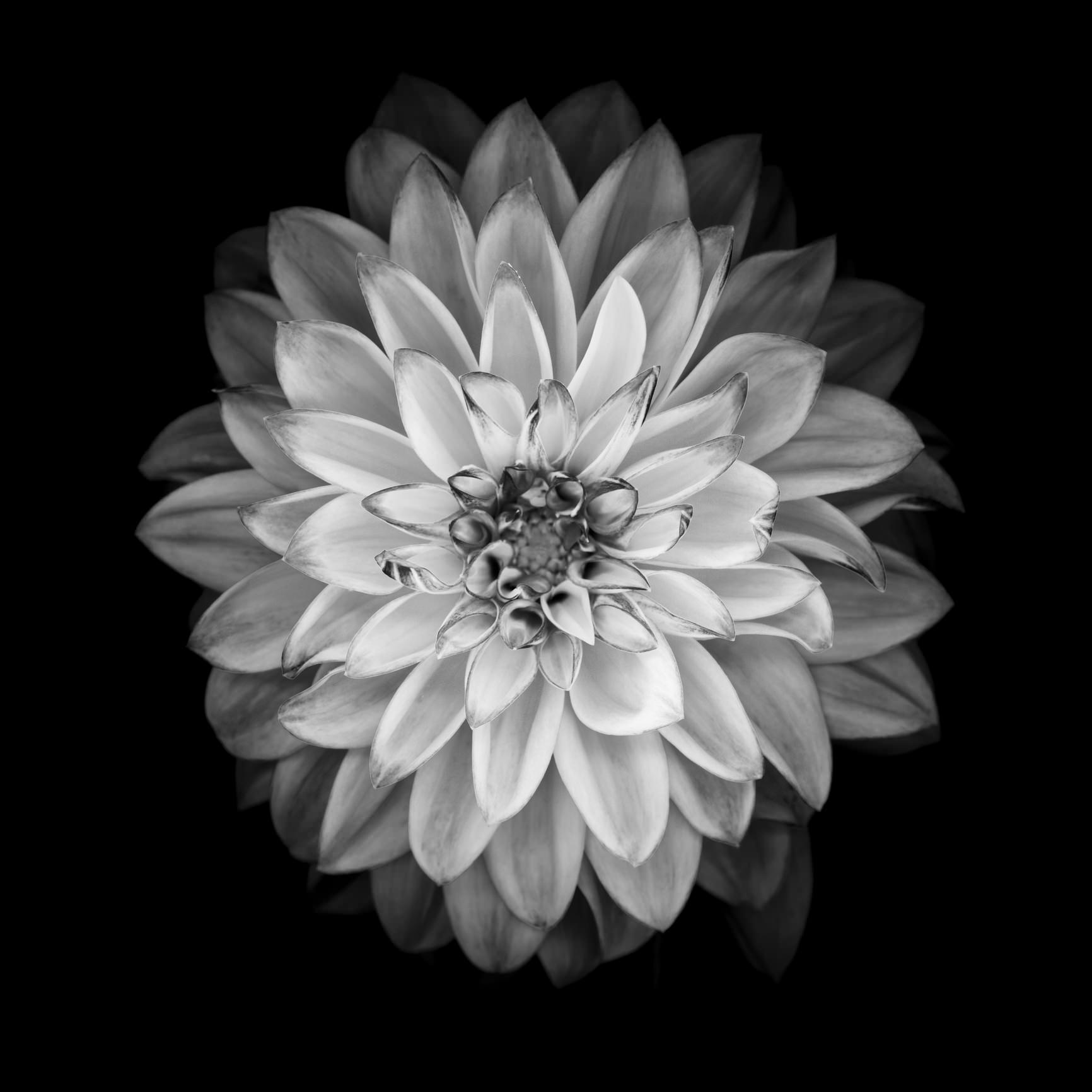 Even a simple photo of a flower takes on a different visual impact when the image is converted to black and white.

But simply converting the image in post-processing won't get you results like those seen above.

In this instance, great care was taken to create an environment in which the delicate petals of the flower take on the elegance of a jewel.

The lighting had to be just right to get this effect - bright enough to highlight the texture of the flower's petals, yet focused enough such that the light falls off quickly and doesn't illuminate the background.

In this case, we see again how crucial contrast is to a successful black and white photo: the pure black background helps the bright highlights of the flower seem as though the pop off the screen. 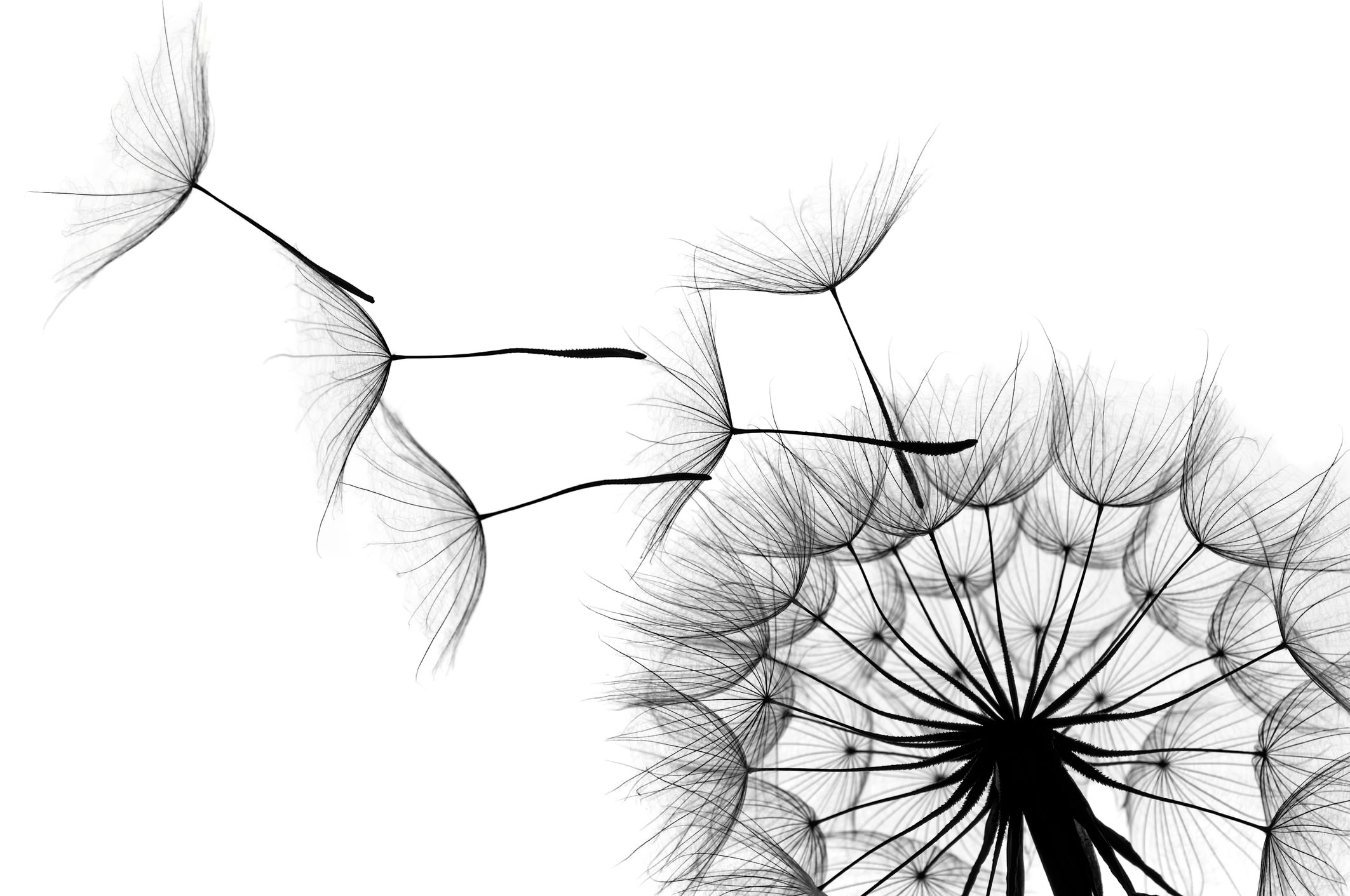 High-key black and white images might not be as common, but I think you'll agree that they have their place in terms of creating a high-impact shot.

This image is an ideal example of taking a subject with tons of visual appeal and ramping up that appeal with a level of contrast that's both in your face and beautiful at the same time.

The trick to creating an effective high-key photo is having the right background.

In this case, the bright white backdrop is an ideal complement to the delicate and intricate features of the dandelion. What's more, since the background is devoid of features, we get a full view of the dandelion's lines, form, and other details. 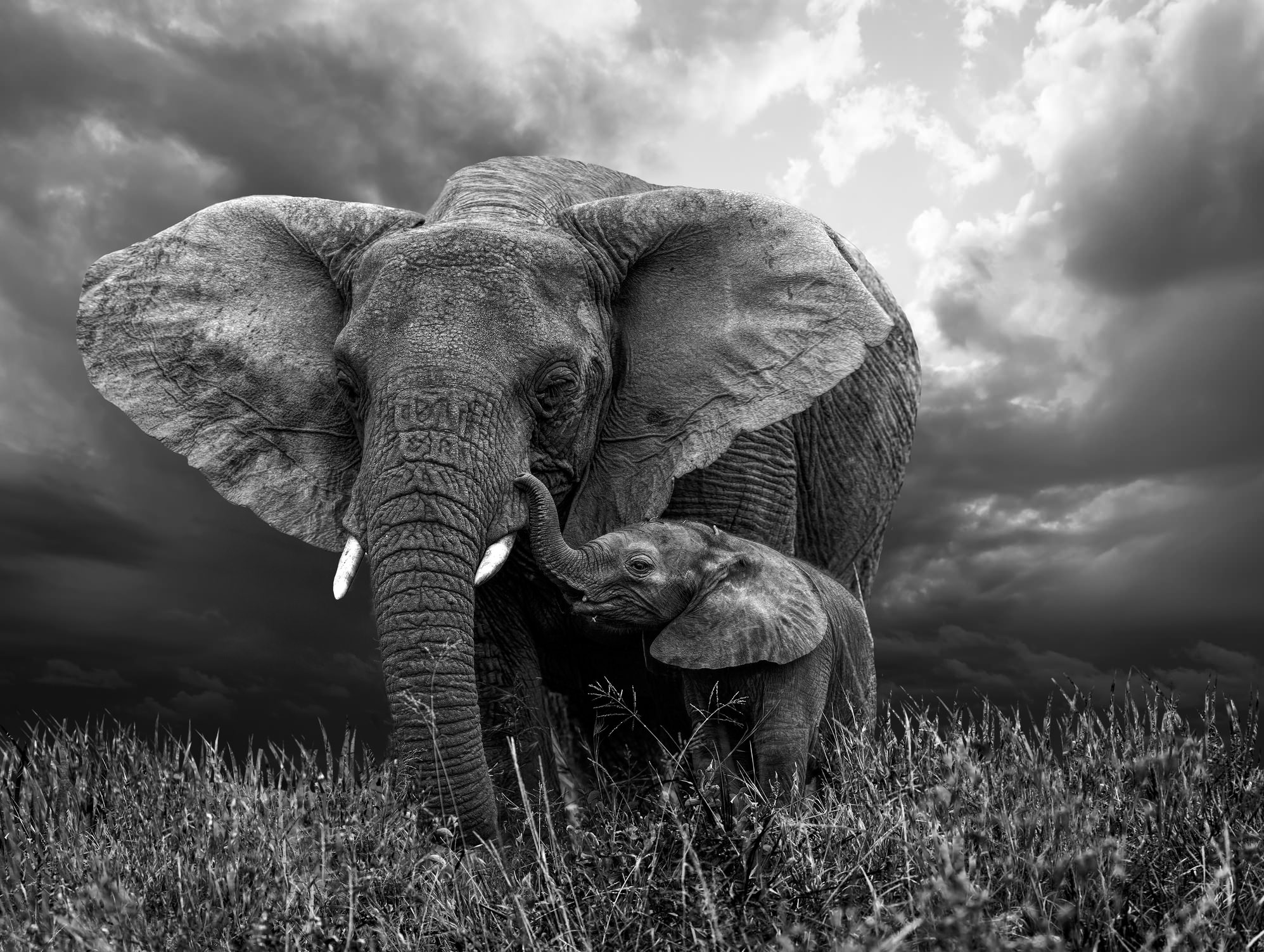 A photographic element that can take a black and white photo to another level is texture.

As seen here, the texture of the elephant's skin adds depth and dimension to the shot. The horizontal lines of the mother's skin contrasts nicely with the vertical grass in the foreground, creating a visual playground for the eye.

Note as well the position from which the photo was taken: by getting low to the ground, the photographer is able to create a scene in which the elephants are more imposing. Even with that powerful stance, the elephants have a graceful look about them that just couldn't be achieved had this image remained in color.

If you've ever seen an Ansel Adams landscape, you already know how a black and white treatment can result in a stunning, stylish take on the world around us.

Much like is central to the success of a portrait or a photo of nature and wildlife, landscapes benefit from the inclusion of things like areas of highlight and shadow.

In this case, the lightness of the water combines with the darkness of the clouds and the trees in the background to create a classic black and white look with excellent dynamic range. Like the portrait of the little girl above, the abundance of middle grays helps give this shot an increased sense of tranquility and calm - effects that are mirrored in the still waters of the lake.

In that regard, converting this image to black and white doesn't just make it a more elegant shot, it helps accentuate the themes that are already present. 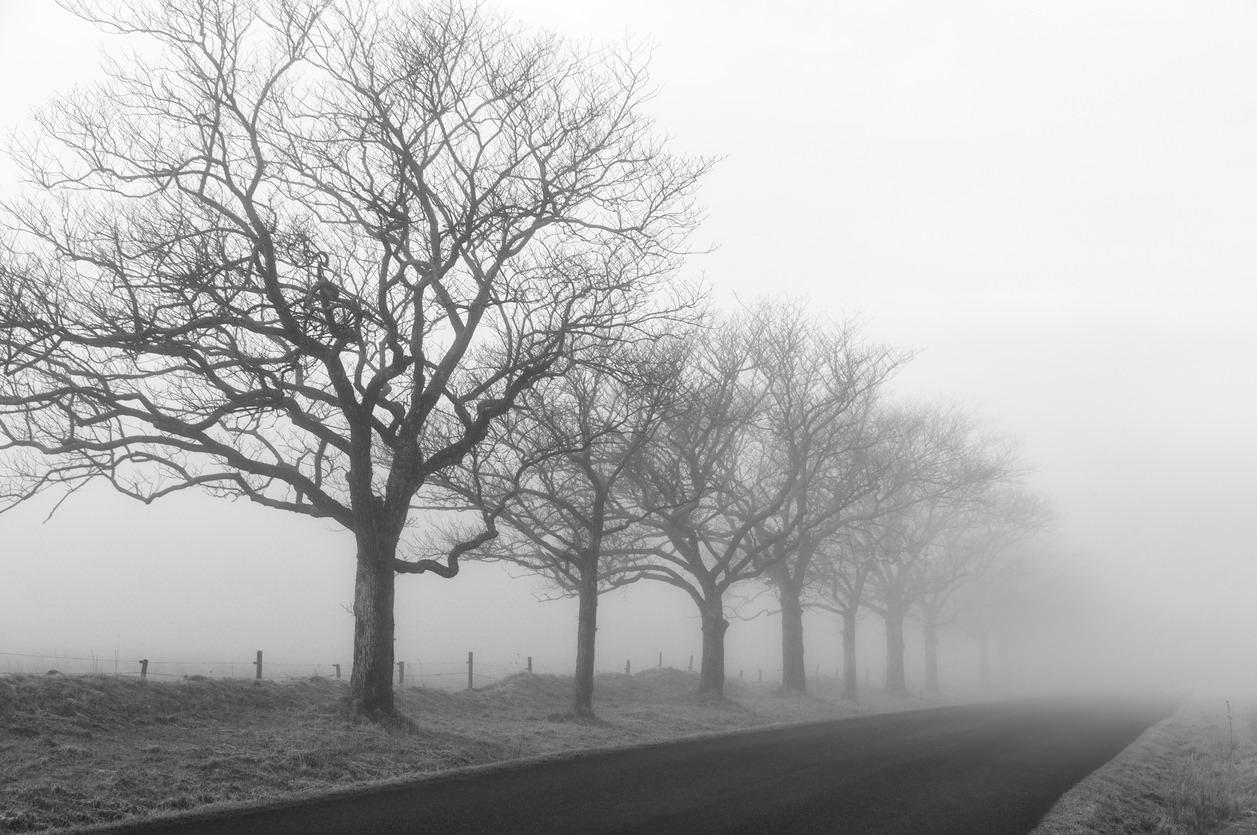 If you ask me, there's something mystical and mysterious about fog that gives landscapes an extra level of visual interest.

But when fog is combined with a black and white conversion, that feeling of mystery is only enhanced.

The key to an impactful black and white foggy shot is to include strong visual elements that grab the eye's attention.

In this case, the strong, linear lines created by the tree trunks offer a nice juxtaposition to the ether of the fog.

What's more, the repeating pattern of the trees gives the image some structure, which, again, is crucial for a black and white photo, no matter the subject. Without the benefit of color, things like lines, textures, and patterns help give the eye something on which to focus. 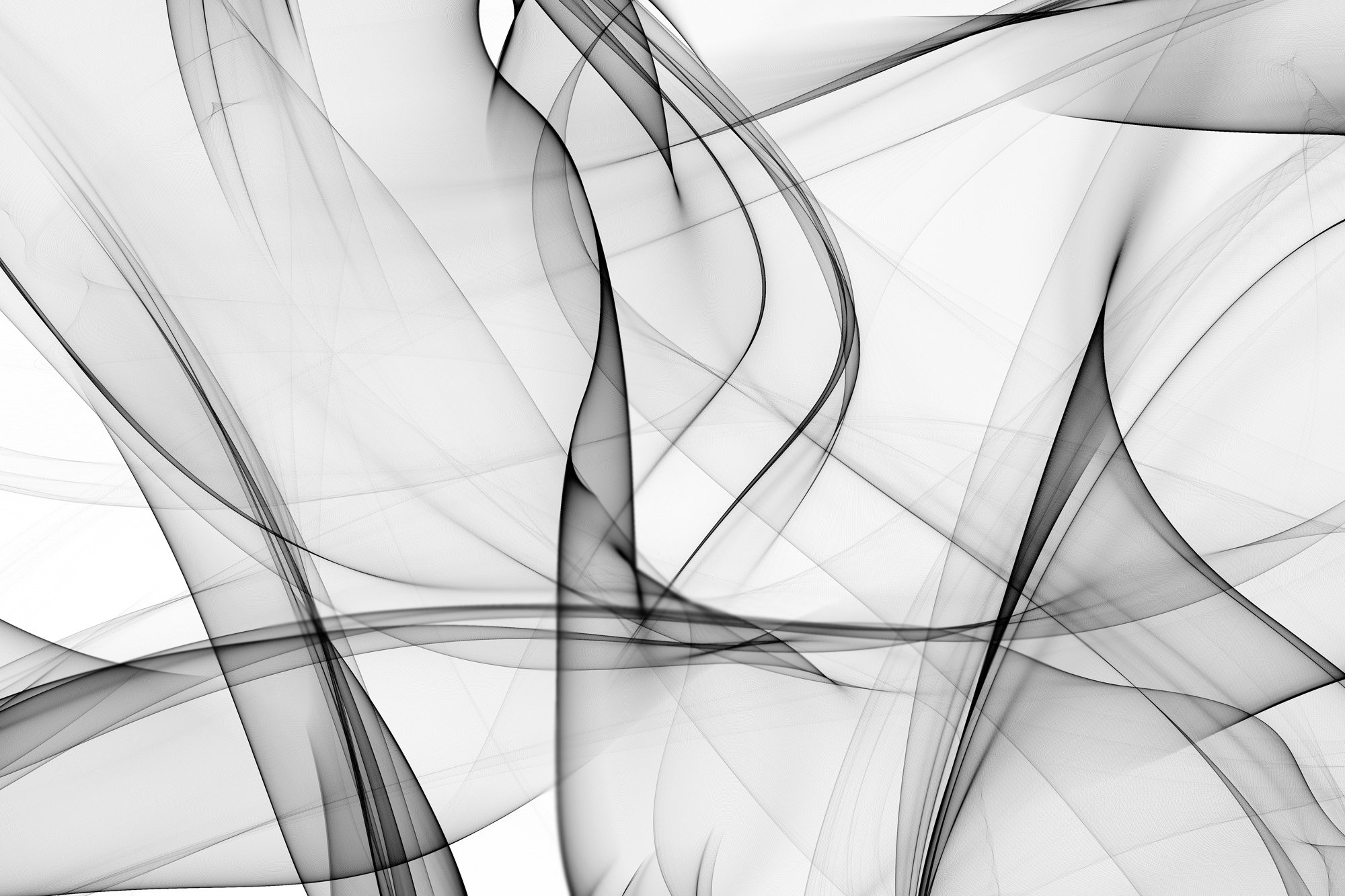 I noted earlier that there is beauty in simplicity. And though some might be hesitant to go the simple route when creating an abstract photo, I can see the value of doing so when that simplistic, abstract scene is presented in black and white.

In the example above, the high-key background helps put the gentle lines and curves of the dark fabric on full view.

The manner in which the fabric seems to be waving in a gentle breeze is chic, a quality that is only enhanced by the contrast of the dark and light tones in the shot.

This image is proof positive that you don't need tons of detail to create a compelling black and white photo. Contrast, lines, and texture will carry you a long way! 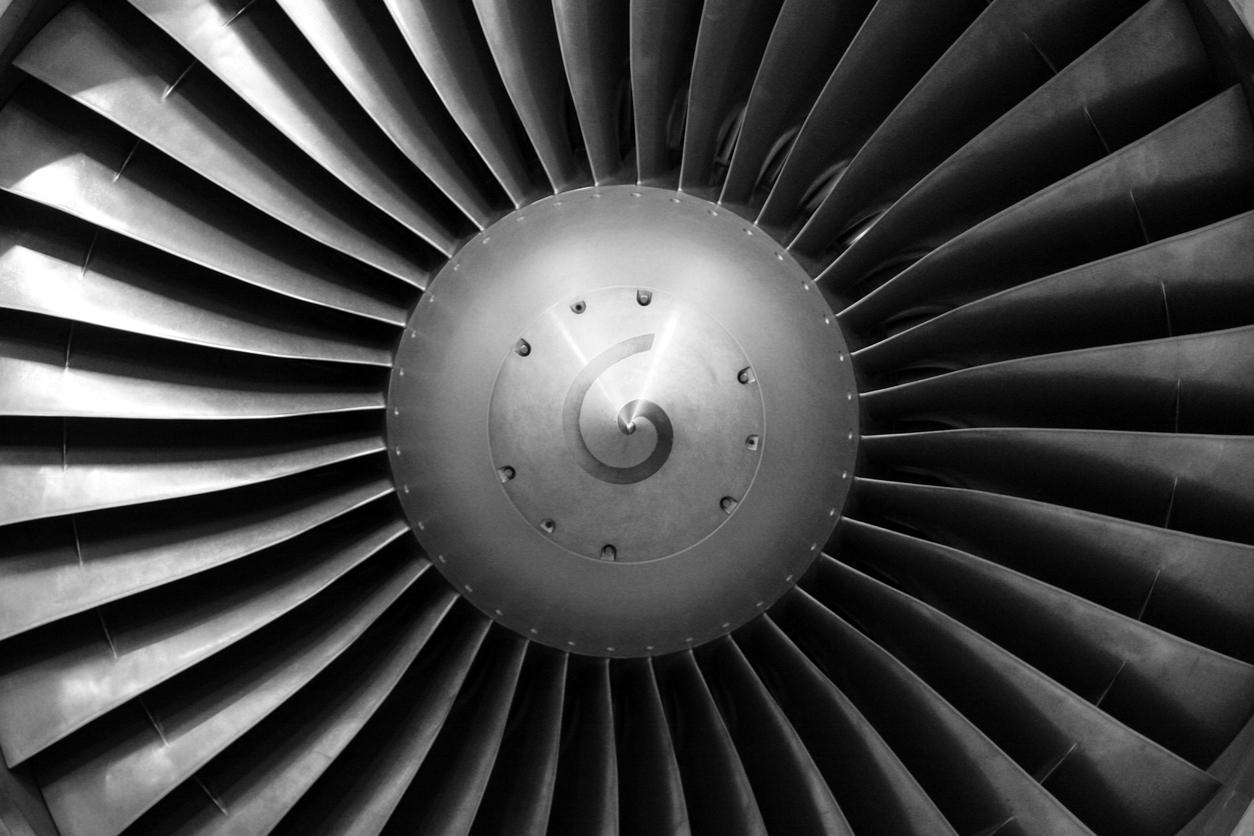 Because black and white photos can be, at times, much more elegant than color photos, you can get away with photographing objects that might seem odd or even mundane.

In the image above, a jet's engine becomes an interesting subject because of the black and white treatment.

The strong lines created by the engine's fan provide structure similar to the tree trunks I discussed in the landscape image above.

Working with that structure is lighting that offers just enough contrast that gives the photo needed depth, but without blowing out the highlights.

Notice on the left side of the frame how the light is gently reflected off the engine's blades. That bit of light contrasts beautifully with the darker recesses of the engine, the result of which is a classic image of a subject that usually goes without notice. 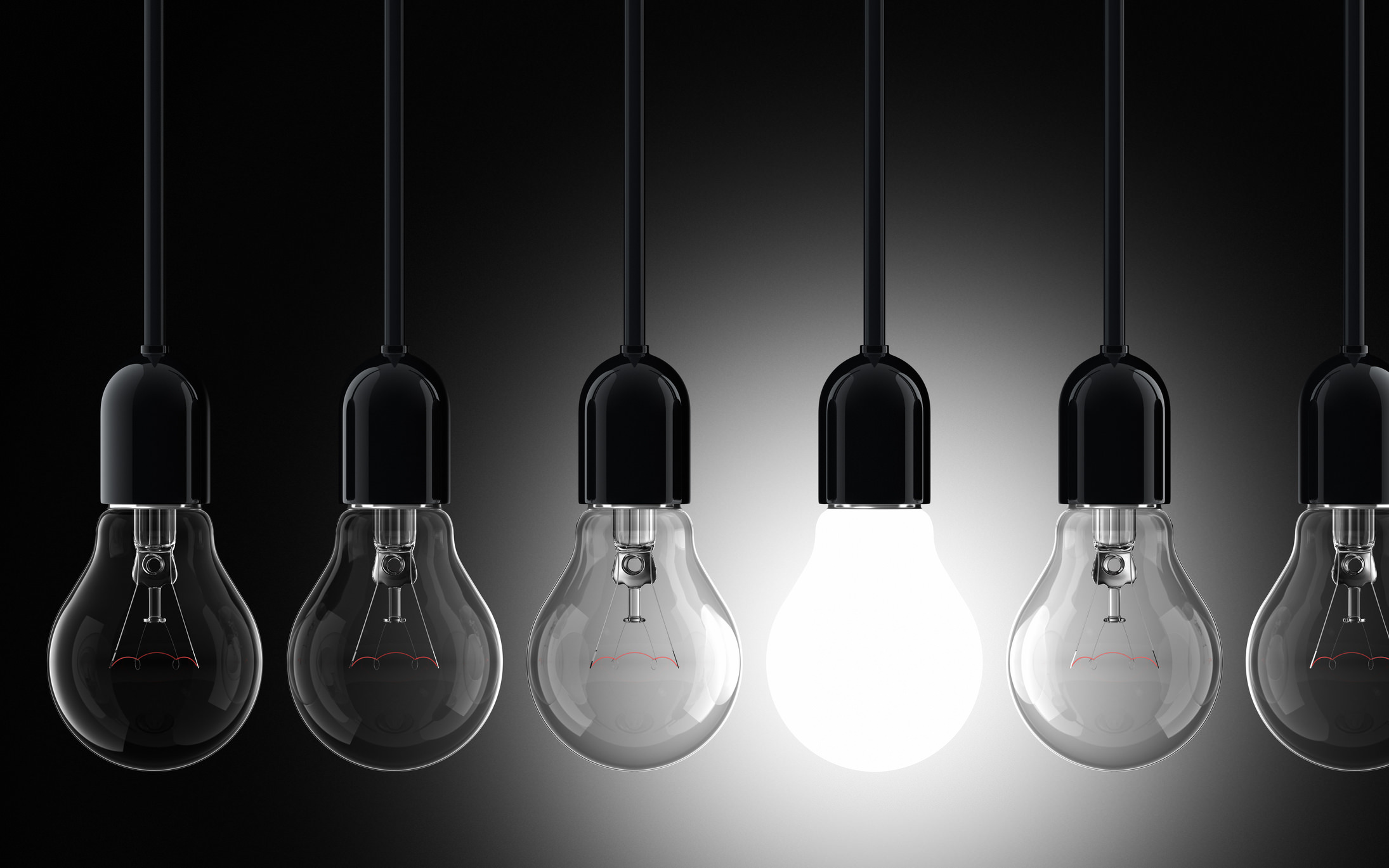 This photo of an array of light bulbs puts the notion of contrast in a black and white image on full display.

With a single bulb illuminated, we have a bright, featureless area of highlight that works nicely with the dark, shadow-filled corners of the shot.

What's more, that light helps illuminate the intricate and interesting details of the surrounding light bulbs - details that add visual impact to the shot.

Again, as noted earlier, repeating patterns give structure to black and white images. In this case, the array of lights helps elevate this photo with a polished and refined look that helps these everyday objects take on a greater sense of luxury and elegance.

With that, you've got 11 beautiful examples of how converting your images to black and white can garner gorgeous results.

Just remember that when looking for subject matter for a black and white shot, focus on things like light and shadow, texture, lines, and patterns, as each of these features will enhance the stately appearance of the subject.