See the Beauty of Nature in These 20 Incredible Bird Photos 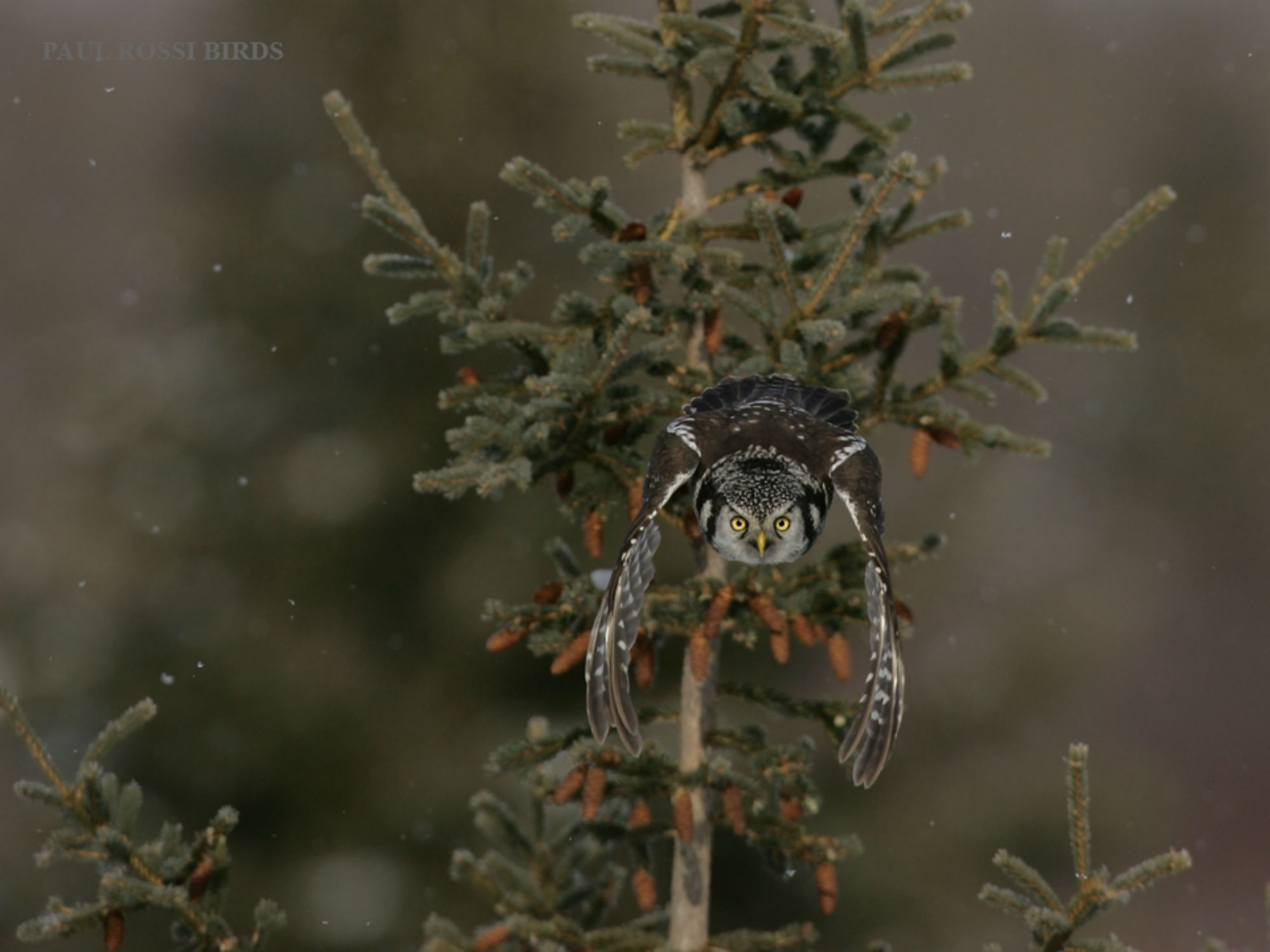 If you ask me, bird photography is one of the most difficult types of photography to master. It's right up there with weddings!

Not only does it require intimate knowledge of the subject, but it also requires an incredible amount of patience to get high-quality shots.

I'm not the world's most patient person, so I appreciate anyone who spends hours and hours with perhaps just a couple of shots to show for it.

Paul Rossi is one such photographer, a man that has perfected his approach to bird photography over many, many years.

His playground is the Eastern Upper Peninsula in Michigan, an area chock-full of birds to delight his lens.

I was so impressed upon seeing a few of his bird photos online that I wanted to share a small collection of them with you. 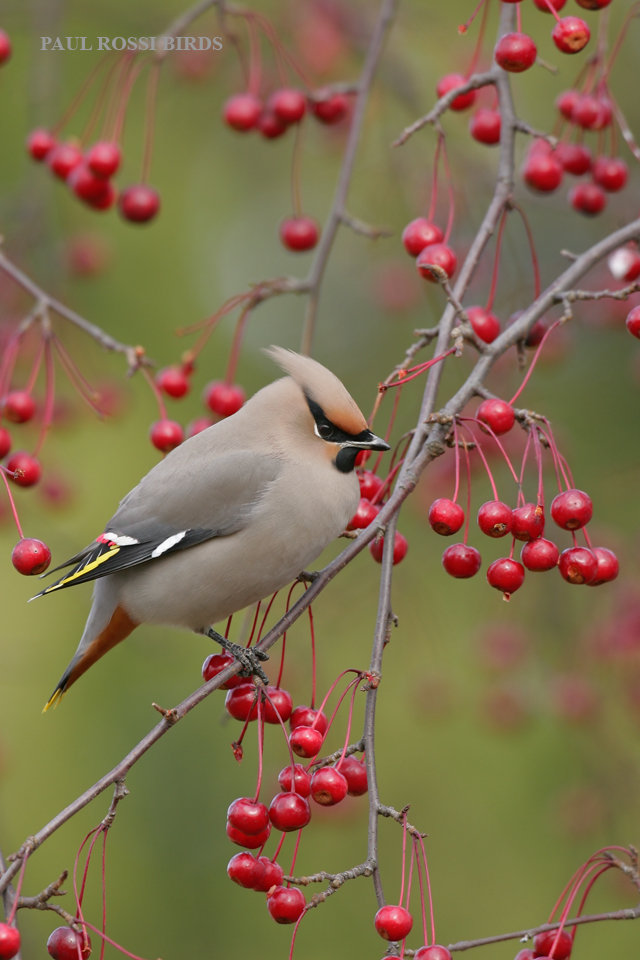 When photographing birds on a perch, it's advantageous to blur the background.

Doing so blends the background features together and minimizes distractions, that way the viewer's eyes stay focused on the bird.

In this shot, Paul captured a beautiful Bohemian Waxwing. 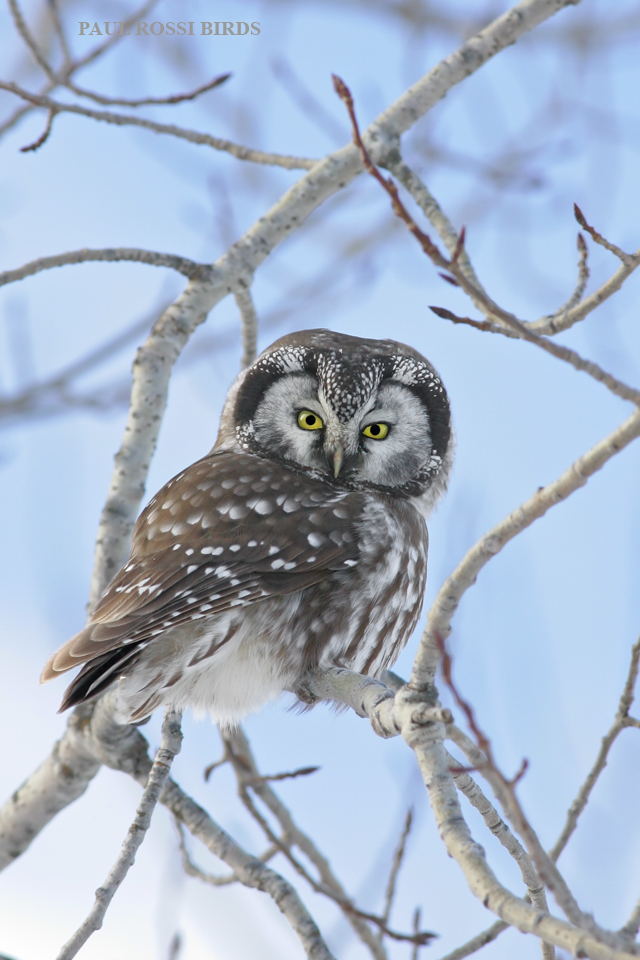 Owls are one of my favorite birds because of their huge, colorful eyes.

In this case, Paul snapped a beautiful portrait of this big guy, a Boreal Owl.

Notice how the eyes are tack-sharp. When photographing birds, that's precisely what you want! 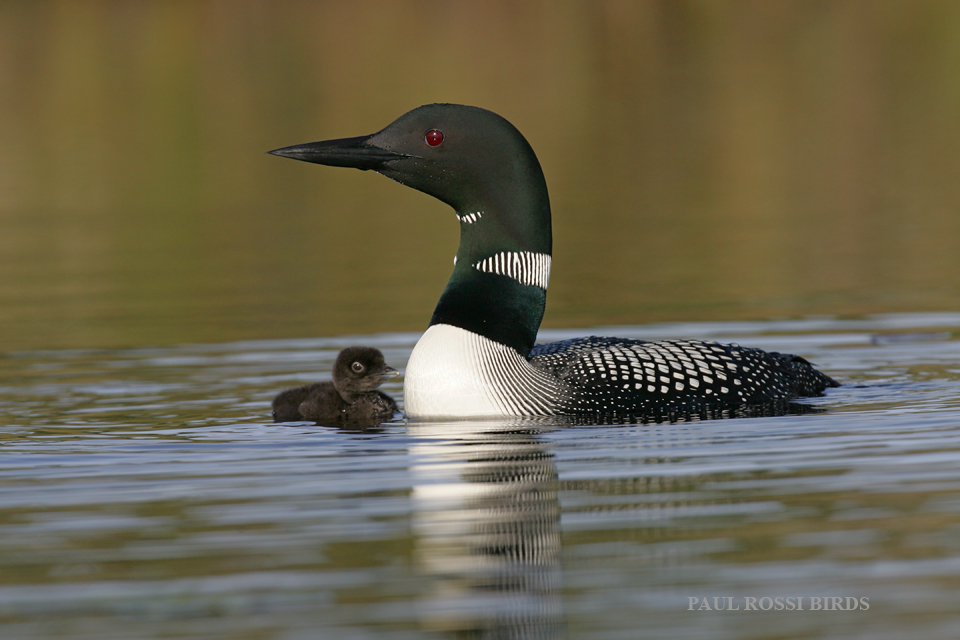 Here's another example of how getting the bird's eye perfectly sharp is so important.

In this case, the deep red eye of the adult Common Loon immediately draws our attention.

If the focus was off even slightly, the visual impact of the bird's beautiful eye would be diminished. 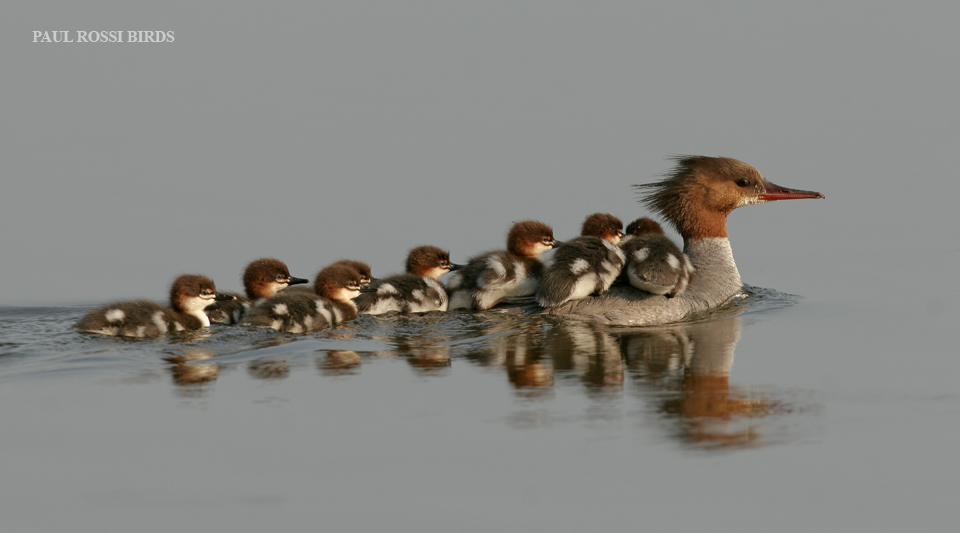 As they say, timing is everything...

Planning your photography outings requires that you learn about your subjects ahead of time.

Understanding migration patterns, feeding patterns, and mating patterns can help you get the shots you want. All three patterns are highly dependent on weather so understanding how birds react to weather is also very important.

In the image above, Paul timed his shoot just right to see this family of Common Mergansers going for a swim. 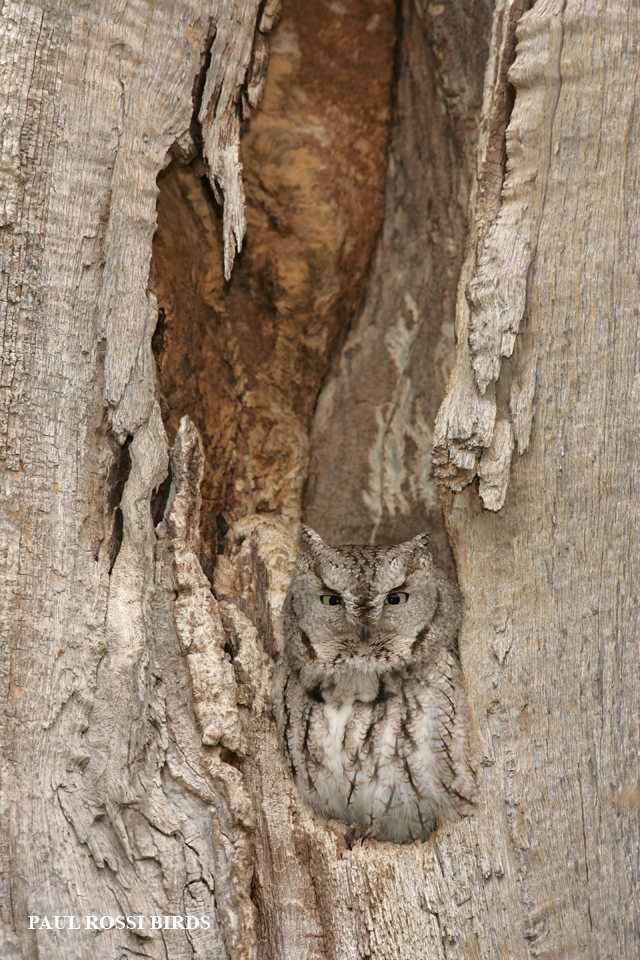 Much like this little Eastern Screech Owl uses camouflage to hide in its nest, bird photographers need to learn the art of approaching birds to avoid scaring them away.

Often, that requires moving slowly and quietly, avoiding direct eye contact, wearing clothing that helps you blend into the surroundings, and of course, patiently waiting in one spot for your chance to get the desired shot. 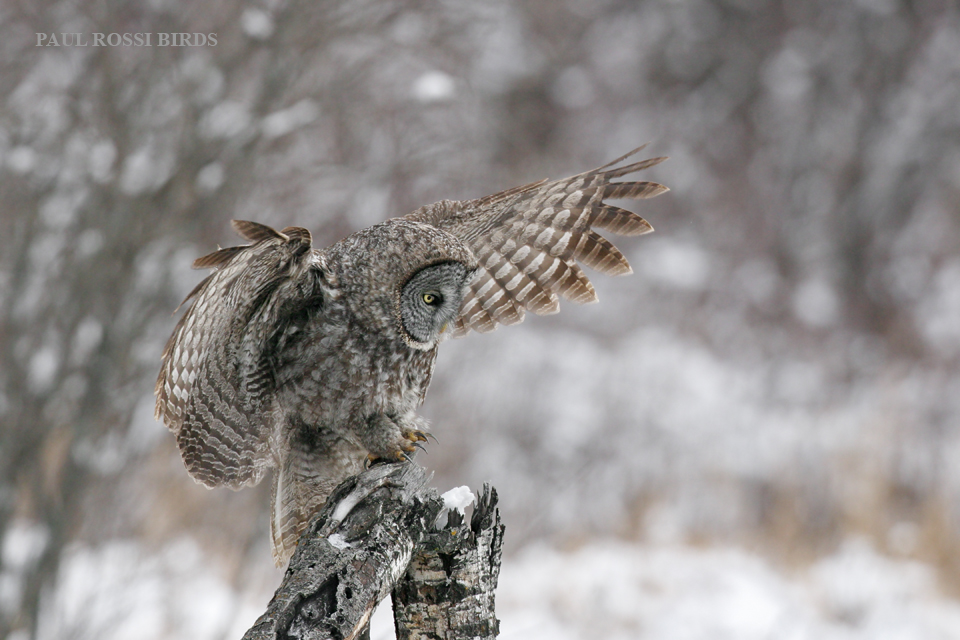 This shot of a Great Gray Owl landing on a tree stump is a prime example of how to frame a shot of a bird that's moving.

Even though this gorgeous bird has landed, the implied motion to our right required the shot to have some room for the bird to move into on the right side of the frame as well. 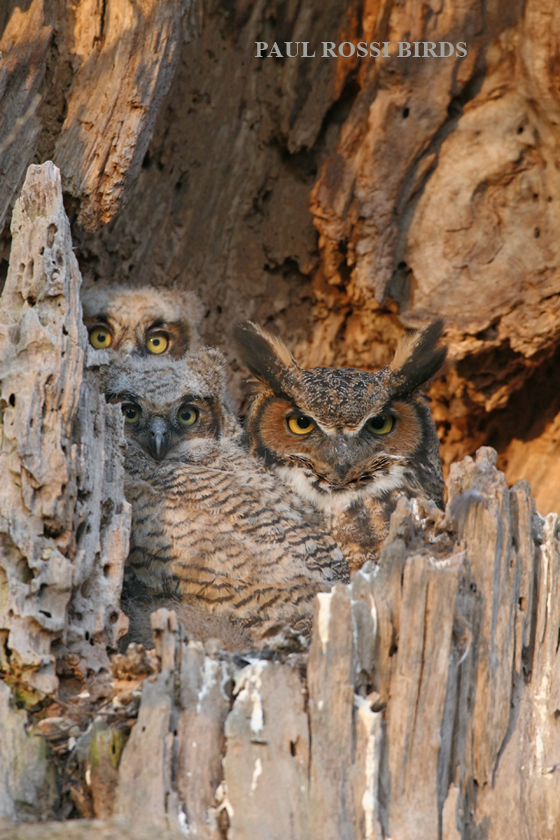 One of the great things about bird photography is that with the right shot, you can highlight the personality of the bird.

In this case, the Great Horned Owl family looks smart and serious, just as you might expect! 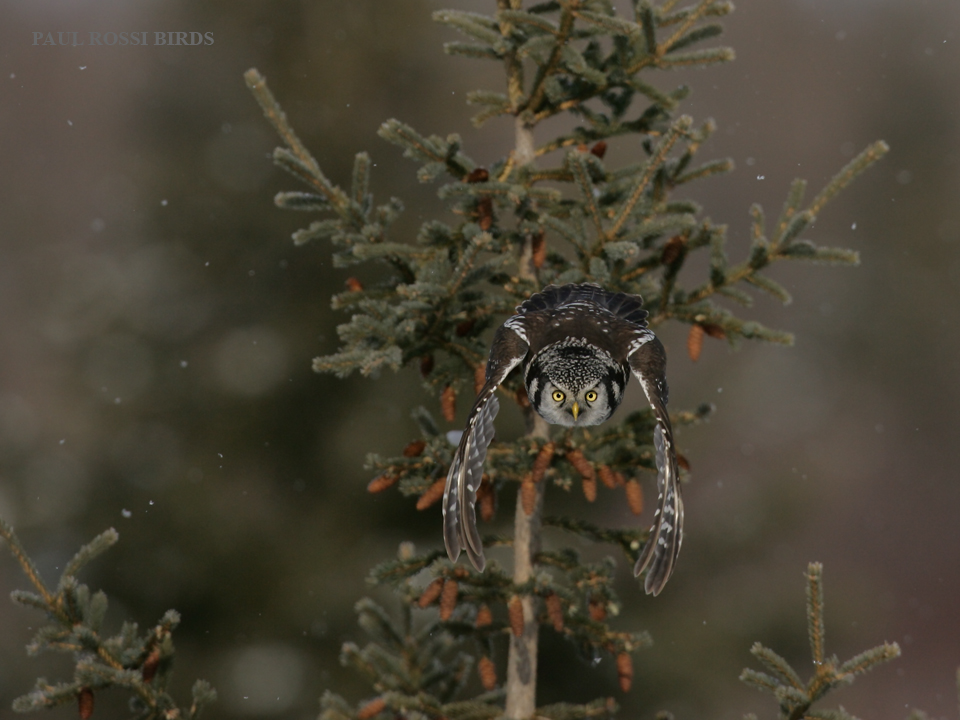 As noted above, photographing birds in flight is no simple task.

However, in this shot of a Hawk Owl taking flight, Paul makes it look easy!

Again, you can see how the shot is framed perfectly to highlight the bird's movement, and its eyes are perfectly sharp. 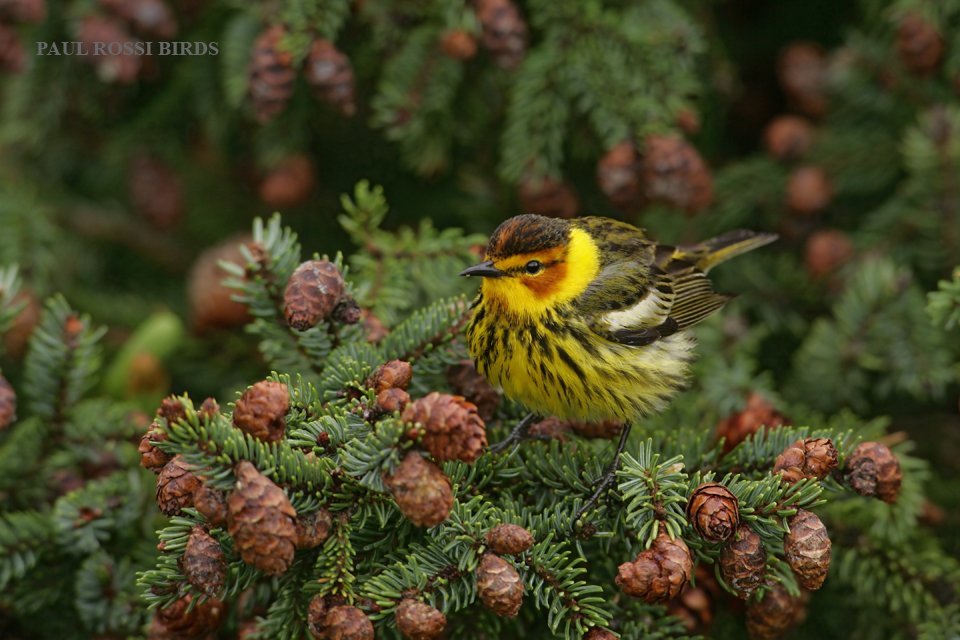 This male Cape May Warbler's vibrant colors put on a gorgeous show in this shot.

The bright yellow pairs nicely with the deep green of the tree, and the contrast of the sharpness of the bird and the beautiful blur of the background make this one heck of a compelling image. 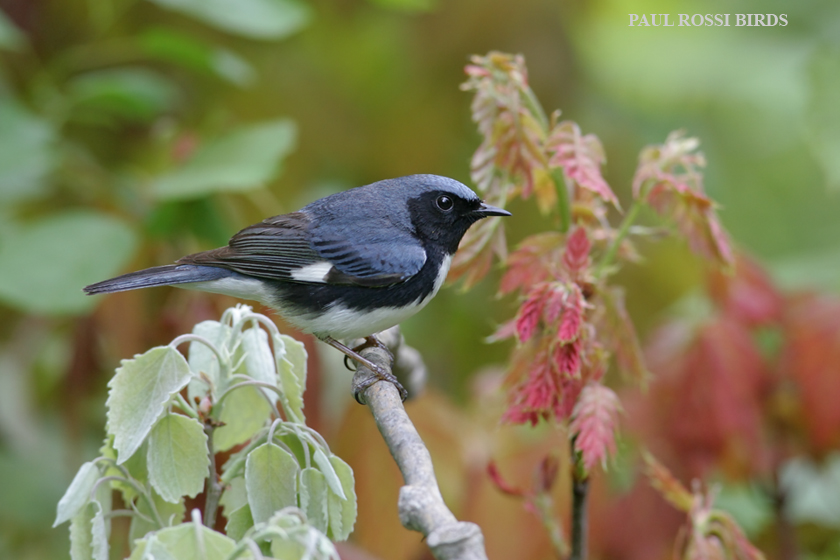 Even when a bird is perched and not moving, it's important to give them a little room to look into.

In this case, since the bird is facing to the right, Paul positioned it in the frame such that there is more room on the right side of the frame. That helps give the bird a little space in the shot and prevents the image from feeling cramped. 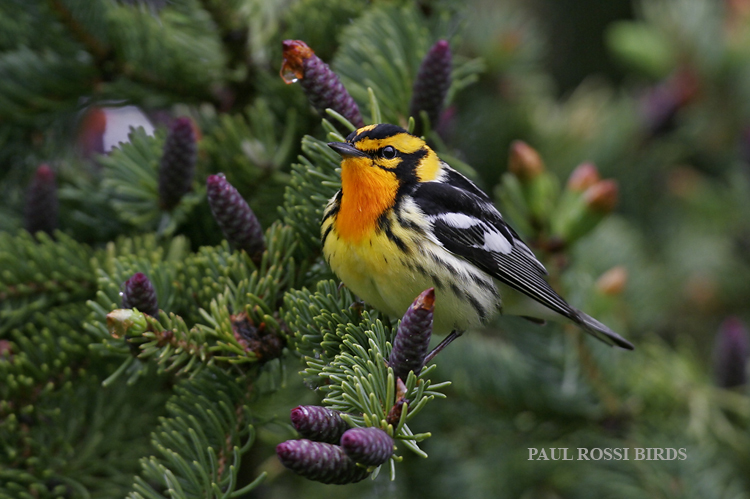 The same concept is shown in this image of a male Blackburnian Warbler.

Notice as well how this image and the one previous break the rule of thirds - the bird's eye is along the vertical midline of the photo.

Sometimes breaking compositional rules gets you a much better photo! 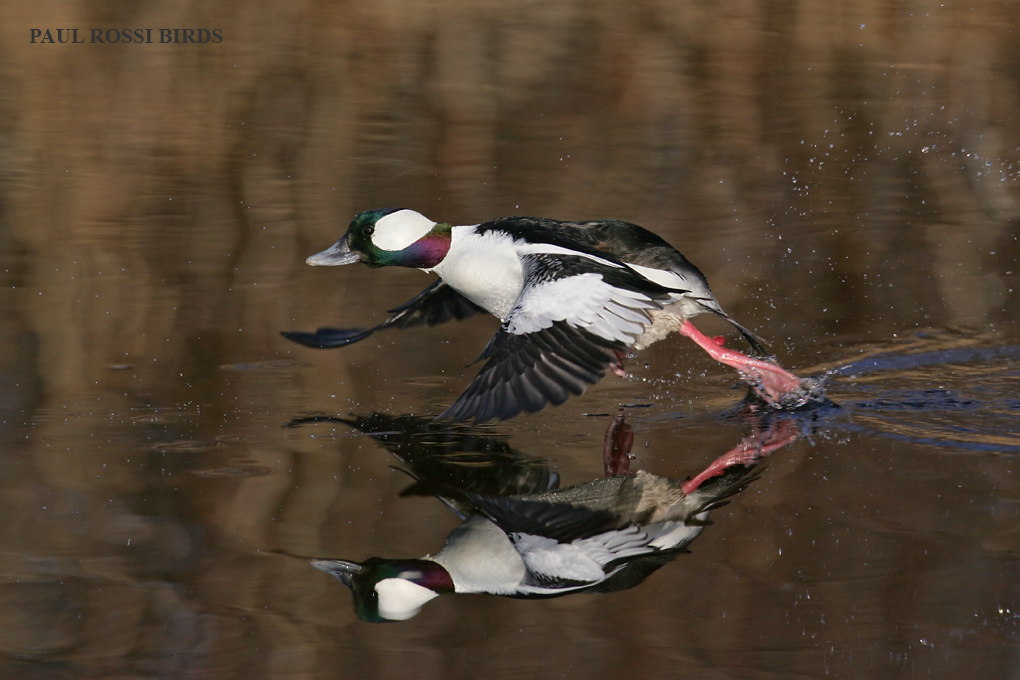 Freezing the movement of a bird in flight, like this male Bufflehead, requires you to concentrate on the shutter speed you use.

Often, bird photographers will shoot in shutter priority mode, that way they can make quick work of changes to the shutter speed. 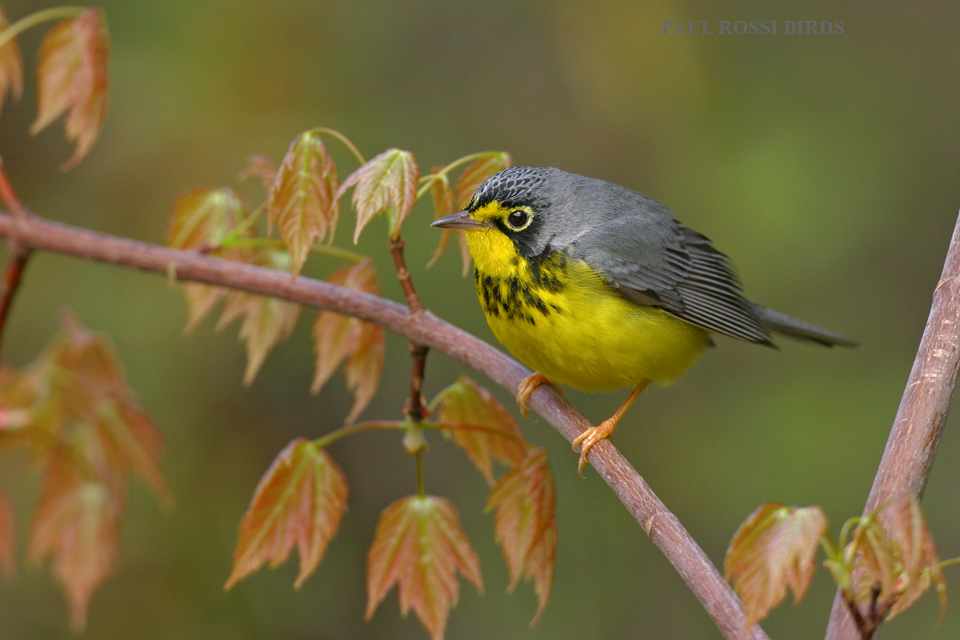 When the bird you're photographing has gorgeous, vibrant colors like this male Canada Warbler, you can add additional color to the shot without drawing attention away from the bird.

In this case, the colorful leaves of this maple tree not only add color to the photo but provide some interesting shapes and textures, too. 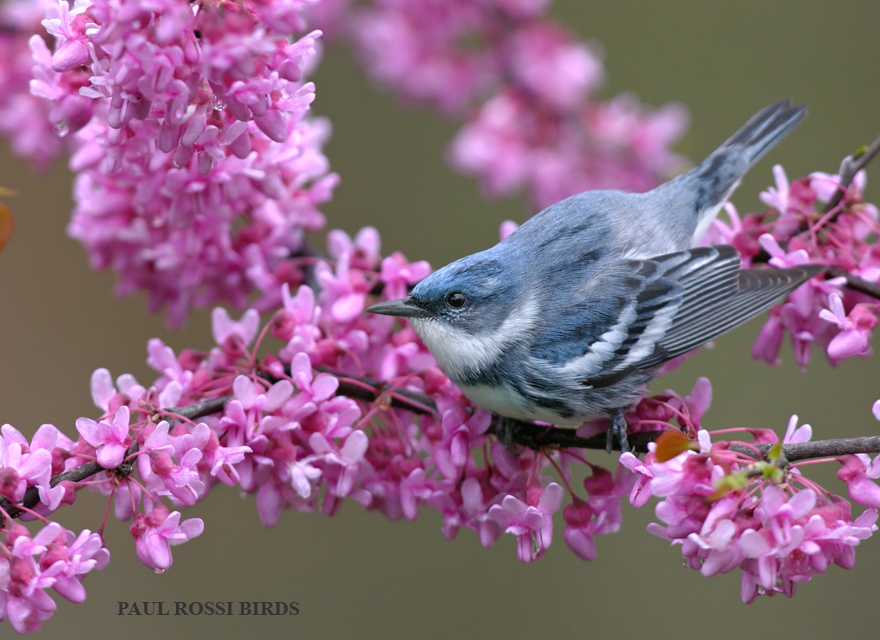 Of course, when the bird you're photographing has muted colors, like this male Cerulean Warbler, adding pops of color to the shot makes it more dynamic.

The bright pink tones of this Redbud offer a gorgeous backdrop for highlighting this little guy. 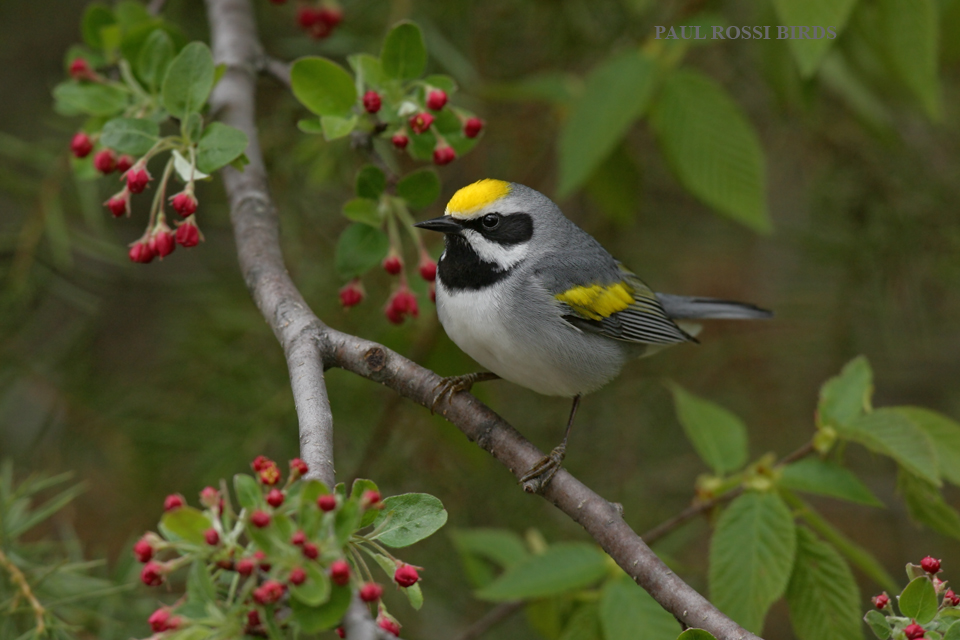 As Paul stated in the notes for this shot, this photo was taken on a dreary morning.

But the flat light was ideally suited for highlighting the gorgeous colors of this male Golden-Winged Warbler. 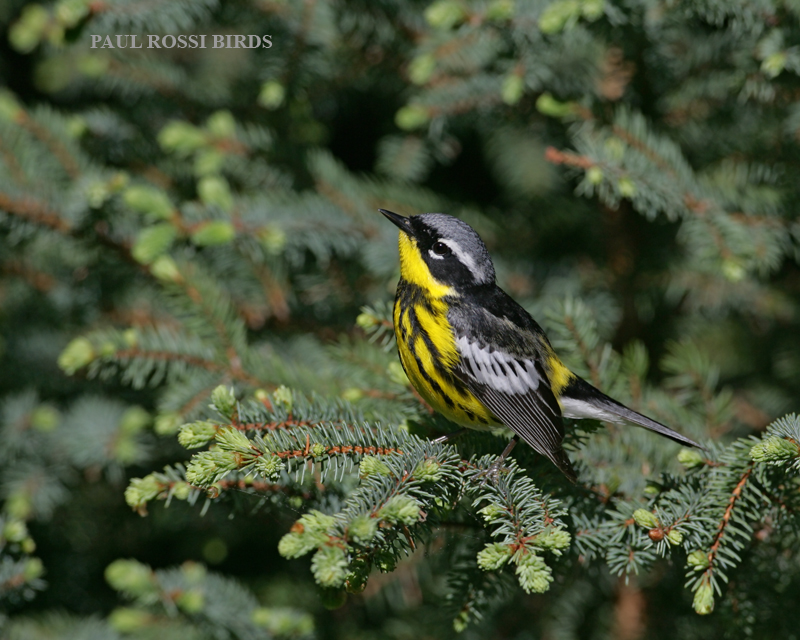 Just like when you take a portrait of a person, blurring the background in a photo of a bird can help keep attention on the subject.

In this case, the male Magnolia Warbler has a beautifully blurry background behind him that helps set him apart in the shot. 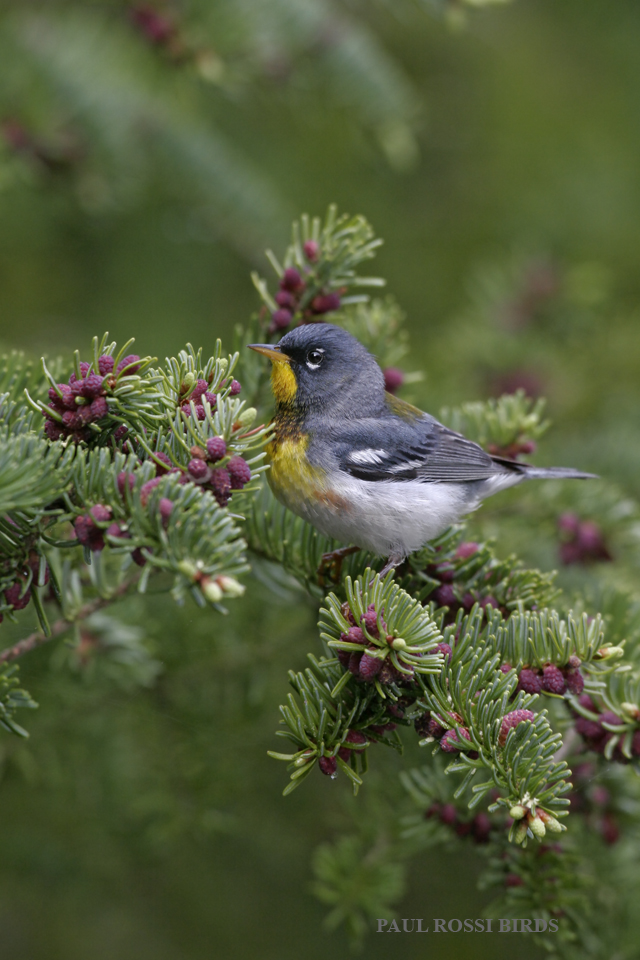 One of the best times to photograph birds and get breathtaking shots is in the morning hours when they're foraging.

Paul captured this shot of a male Northern Parula on a cold morning in mid-May as the bird was foraging for insects in this spruce. 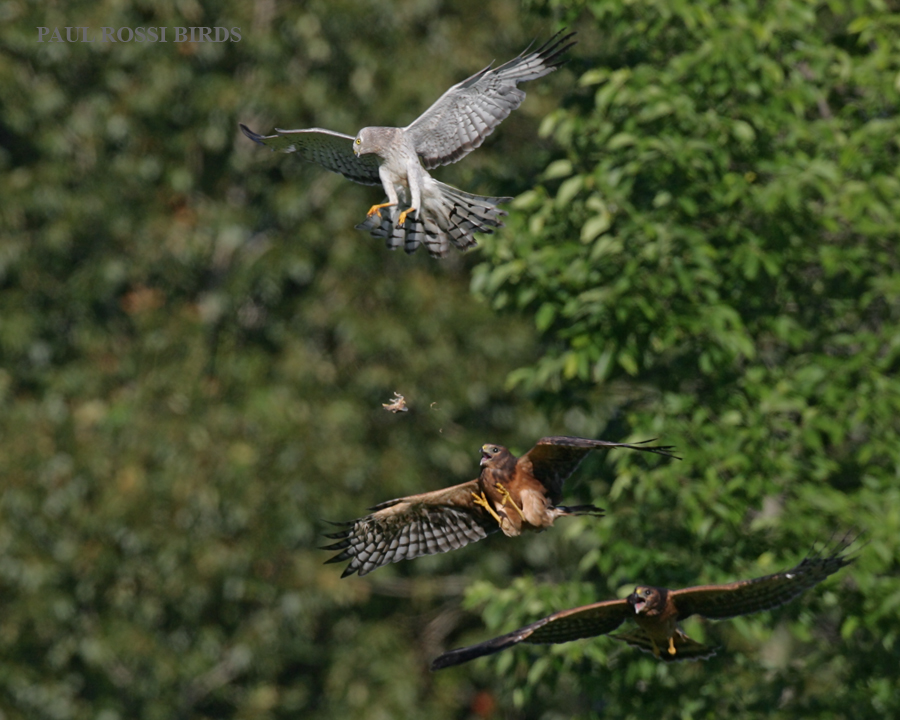 It's hard enough to capture a photo of a single bird in flight, let alone three of them!

As Paul describes in the notes for this photo:

"Not more than three days after taking their first flight, juvenile Northern Harriers chase their father for a meal. The winner is about to catch the prize – a nestling bird captured in the early morning, and dropped in mid-air by the grey-white adult male. He appeared just over the treeline directly in front of me, and swooped down to an open area, where his offspring waited on the ground and flew up. He never saw me because the low angle sun (just after sunrise) was behind me, pointing straight at him. During the drop another sibling complains, close on the winner’s tail. My camera and lens struggled to gain focus on the adult male (because of the trees in the nearby background) and the moment focus was “locked on” I took one photo, the luckiest I have ever taken to date. Yes, the catch was successful, and the unfed juvenile accepted the result and had to wait for its meal, which arrived about 30 minutes afterward from Mom." 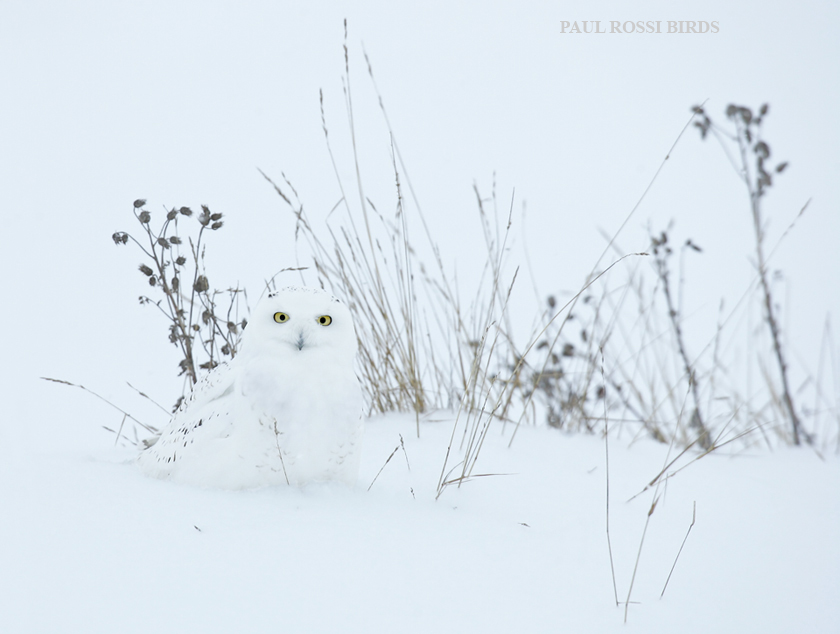 Owls are known for their incredible eyesight, but to get this shot, Paul had to have good eyesight of his own.

Keeping his eyes peeled for this Snowy Owl's big, yellow eyes, Paul spotted the bird alongside a road and stopped to capture this beauty. 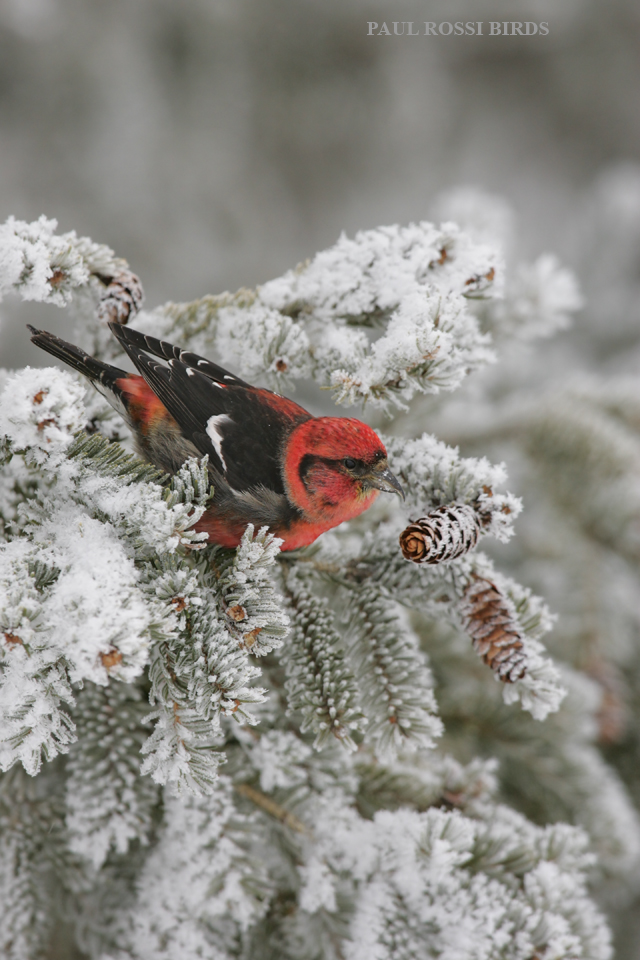 If you ask me, it isn't this White-Winged Crossbill's wings that are the star of the show.

Instead, it's the beautiful deep red coloring of its feathers juxtaposed against the bright white of the hoarfrost covering the tree.

Editor's Bonus Tip: Sometimes all you need to get your creative juices flowing is a little inspiration and motivation from photography quotes. Check out our comprehensive list of inspirational quotes right here.