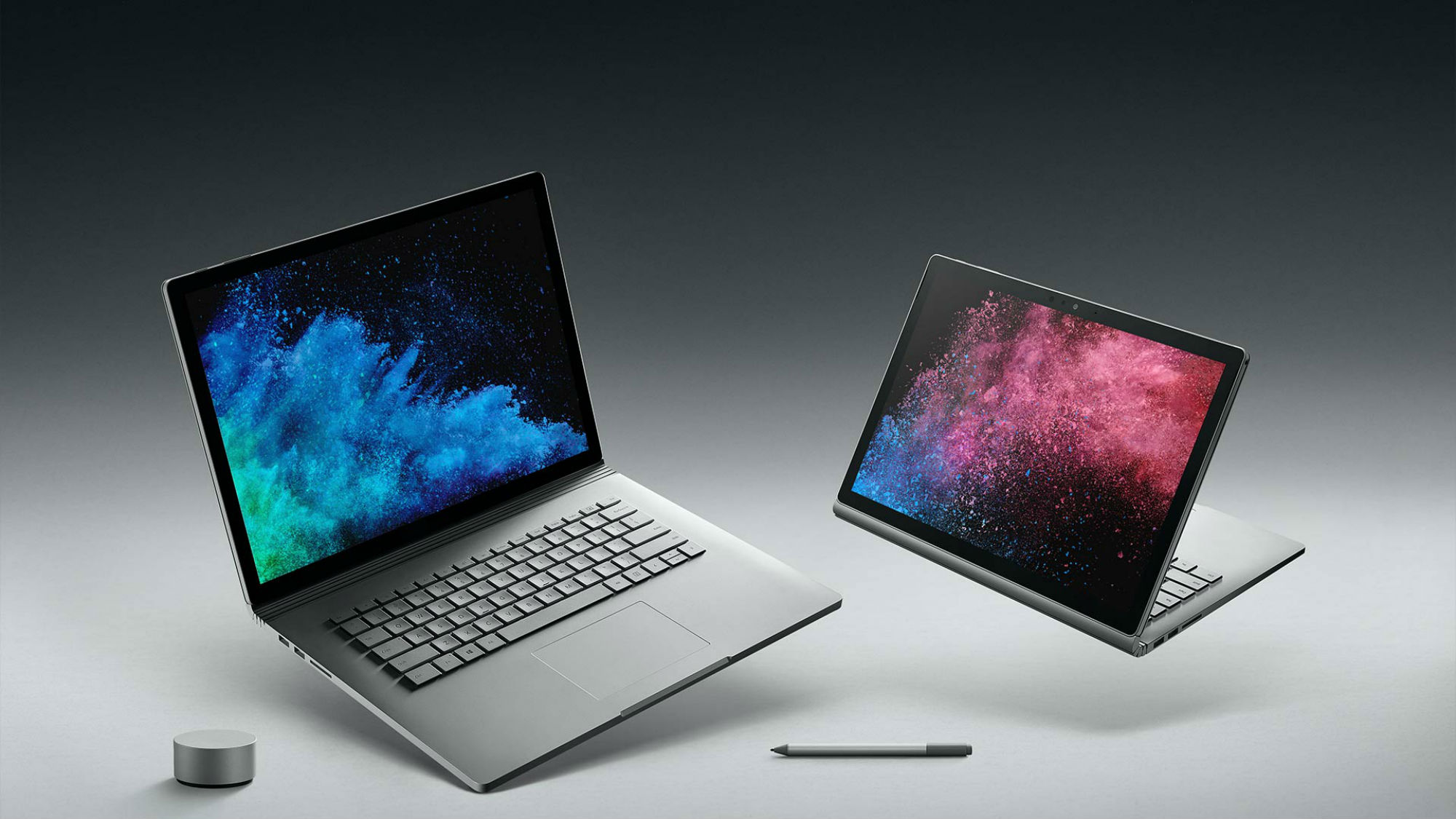 I've had a Microsoft Surface Book for a while now, and I've really enjoyed it. It's a great machine, easy to use, and packed with features.

So I was a little skeptical when Microsoft unveiled their Surface Book 2.

After all, to the naked eye, these things look virtually the same. That left me wondering, how could it be any better?

Well, after a couple of months with the Surface Book 2, I've got a better idea of how Microsoft made their newest Book a better machine. 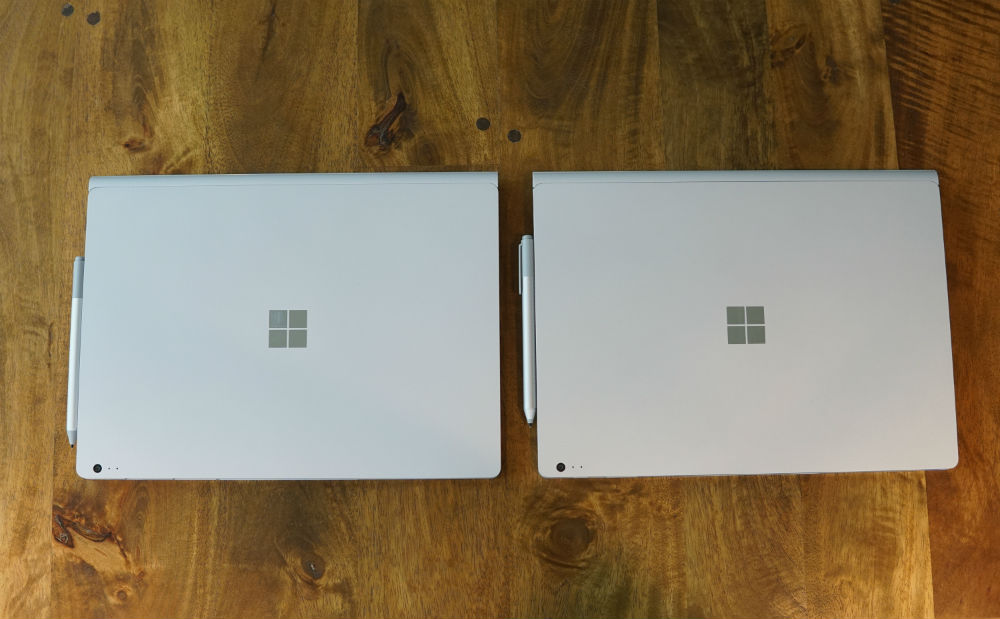 The Surface Book 2 with the Intel Core i5 is negligibly heavier than the original while the Core i7-powered Surface Book 2 is actually slightly lighter than its predecessor.

Furthermore, the Core i5 version has the same dimensions as the original while the Core i7 is the same size as the Surface Book with the Performance Base.

This go-round, though, Microsoft has added a 15-inch version of the Surface Book 2 to complement the existing 13.5-inch version.

From a design aesthetic, nothing much has changed, as you can see in the video above from Microsoft.

The fulcrum hinge is still there in all its glory.

The hinge's shortcomings (wobbliness, difficulty with opening it one-handed) are also still there.

But the Surface Book looked great, so Microsoft was smart to keep things looking the same on the newer version. 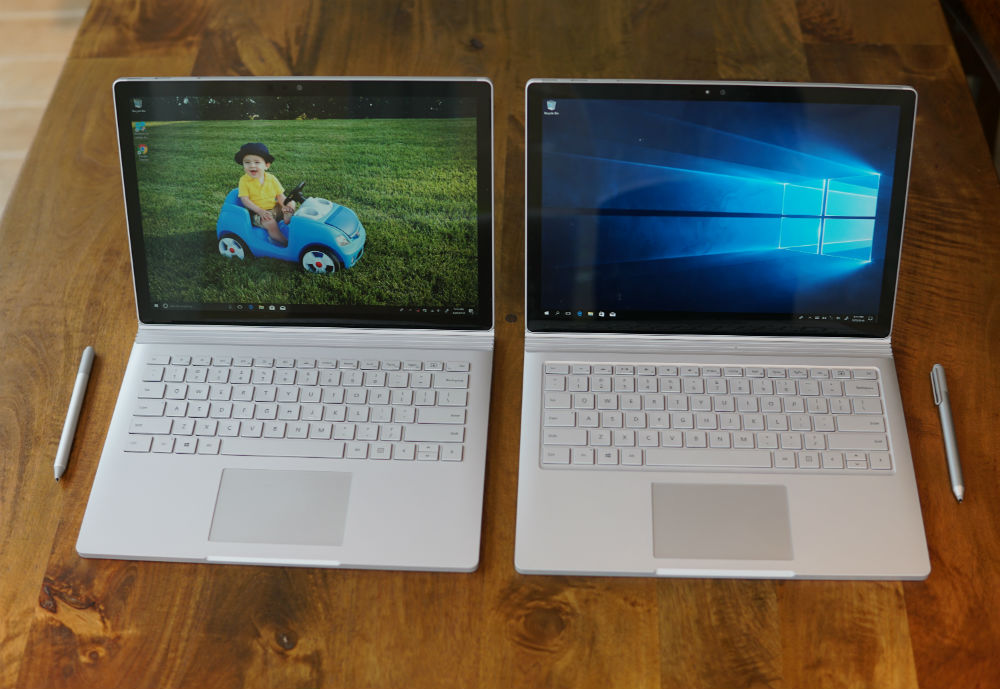 At 267 pixels-per-inch, the touch-enabled PixelSense Display is both beautiful and highly functional. 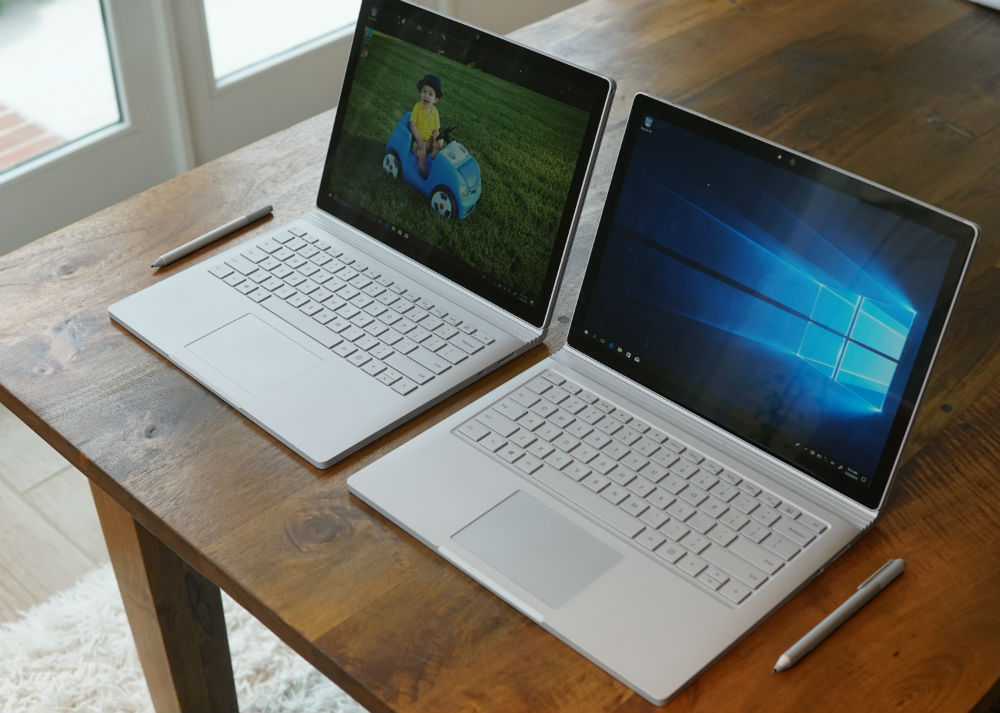 The Surface Book 2 gets upgraded glass, improved sensing elements, and better performance that has increased touch accuracy over the original Surface Book.

Additionally, this new rig supports the Surface Pen and its much-improved performance. You'll find that there is much less lag between touching the stylus to the screen and the inputs appearing than on previous Surface products.

Under the Hood of the Microsoft Surface 2

The Core i7-enabled Surface Book 2 units have 8th generation quad-core processors for even more power. Even better, the i7 models can be paired with an integrated HD 620 graphics card or you can upgrade to the Nvidia GeForce GTX 1050 GPU with 2GB of graphics memory.

Naturally, the Core i7 models with the Nvidia graphics card offer even better performance, especially for users that need to tackle graphics-intense tasks.

Battery Life Gets a Boost...Sort Of 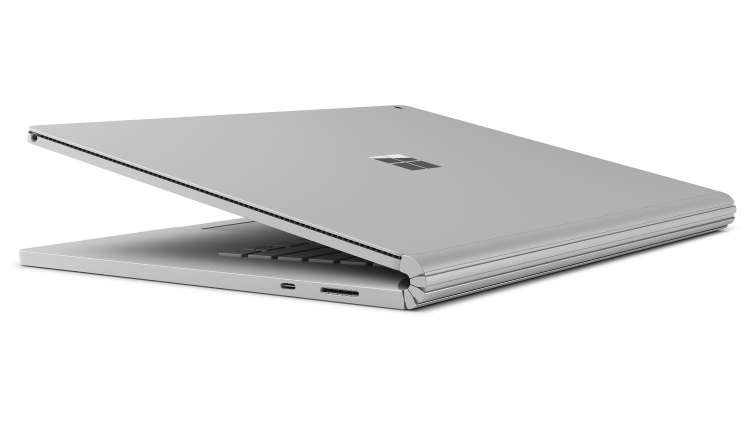 If you opt for the Core i5 version of the Surface Book 2, you'll end up with about the same battery life as is found in the original Surface Book.

That's true even though the new Surface Book 2 has a new processor and upgraded graphics, so technically battery performance is better. Ostensibly, though, you'll still be in the 18-hour range, at least according to Microsoft.

The Core i7 model has a larger, more efficient battery (57.3 Wh), and though that's not as robust as the battery found in the Performance Base, it can hold its own.

Since the Core i7 version has more demands for power, it can't compete with the battery life of the i5 version, but you can expect around 12 hours of battery life (in my informal testing, anyway) when doing normal, everyday tasks. 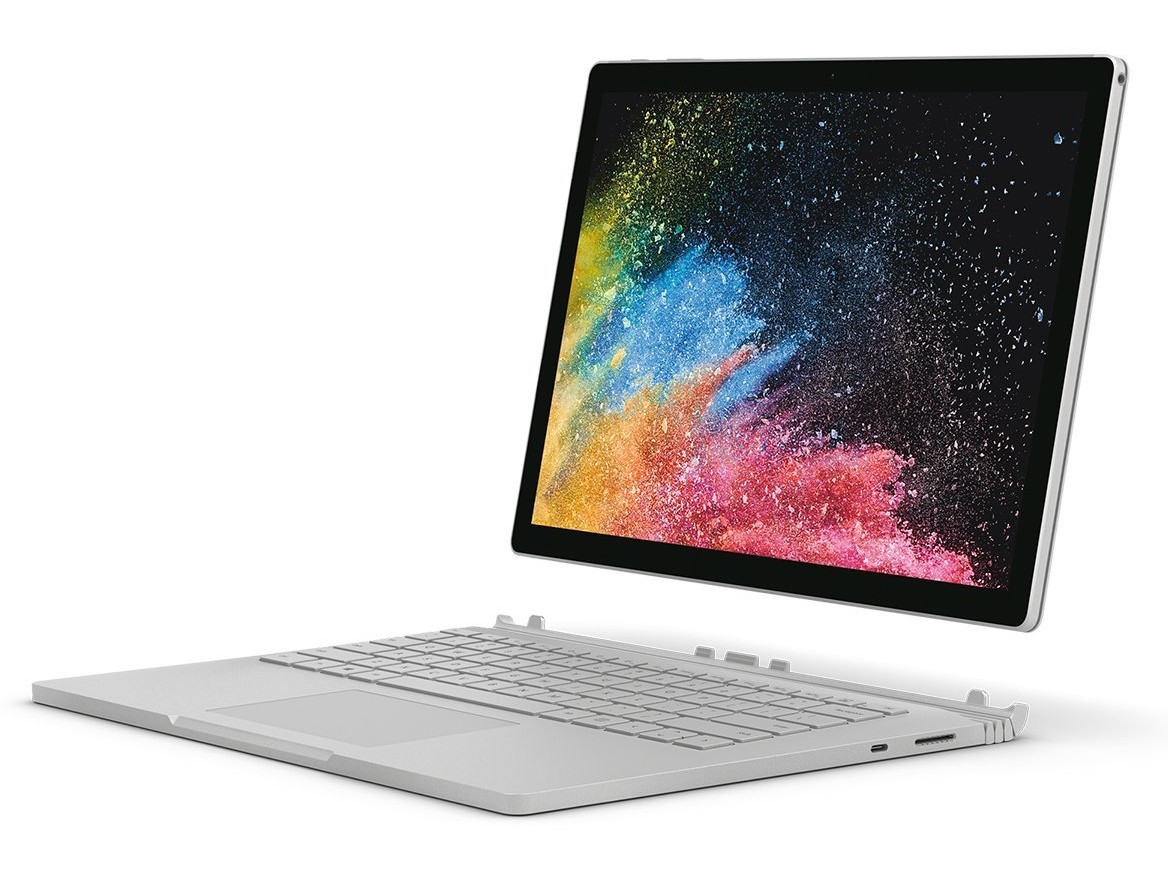 The Microsoft Surface Connect blade port is also a holdover, which allows for backwards compatibility with previous Surface components and chargers. There is a headphone jack and a full-sized SD-Card slot as well, both of which are retained from the original Surface Book.

What's changed, though, is the inclusion of a USB-C port in place of the Mini DisplayPort that was included on the Surface Book.

Microsoft added the updated port for video out and charging purposes after mountains of complaints that there was a complete lack of a modern port on the original machine. 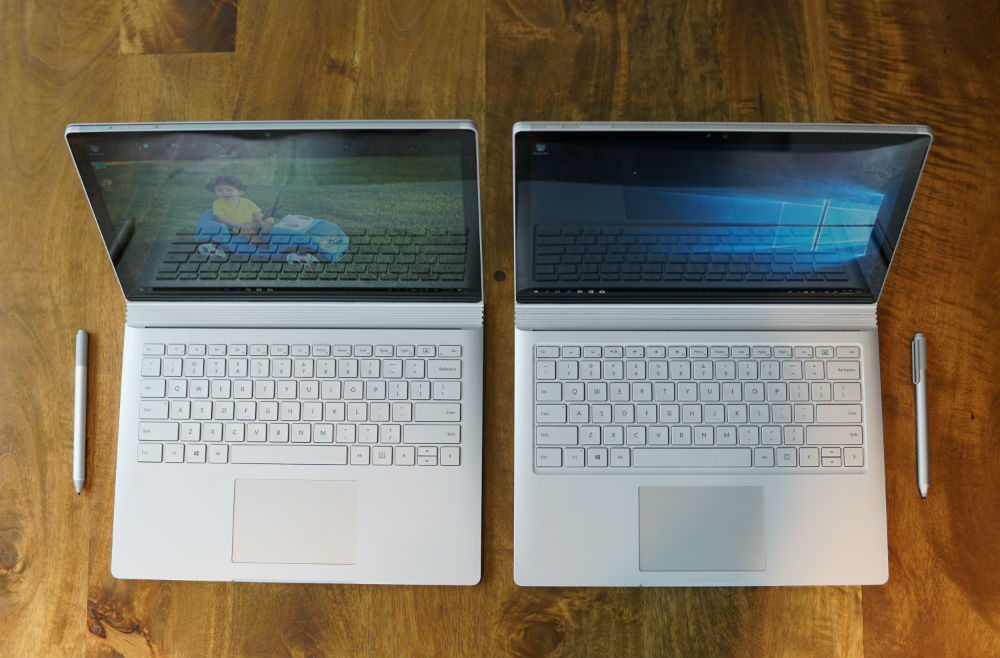 Plus, the retention of the basic design of the Surface Book - which, if you ask me, is gorgeous - was also a smart move by Microsoft.

The question, of course, is whether or not these modest upgrades are enough to constitute buying a new machine.

But, if you want a cutting-edge machine that has all the functionality of a tablet and laptop combined, the Surface Book 2 is definitely worth a look.