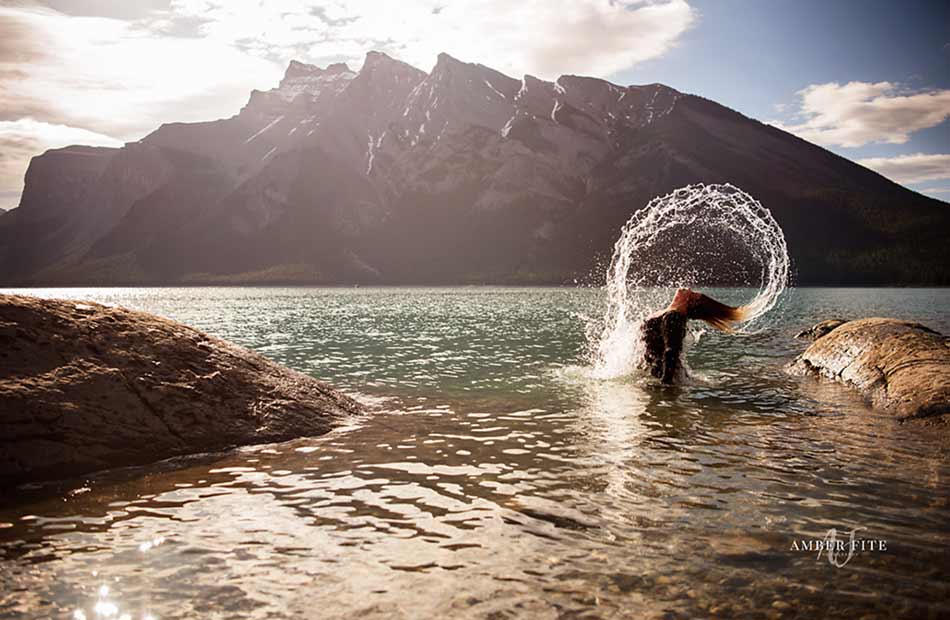 I was browsing through the PhotographyTalk galleries the other day and came across the photo above by my good friend, Amber Fite.

It caught my eye for a number of reasons, not the least of which is the absolutely perfect water hair flip that the model pulled off that Amber captured.

These kind of shots might seem pretty simple - just add water, some long hair, and a fast shutter speed, right?

It's a little more complex than that, though, because timing is everything with these sorts of portraits.

That got me thinking...there's got to be some pretty spectacular water hair flip portraits out there... 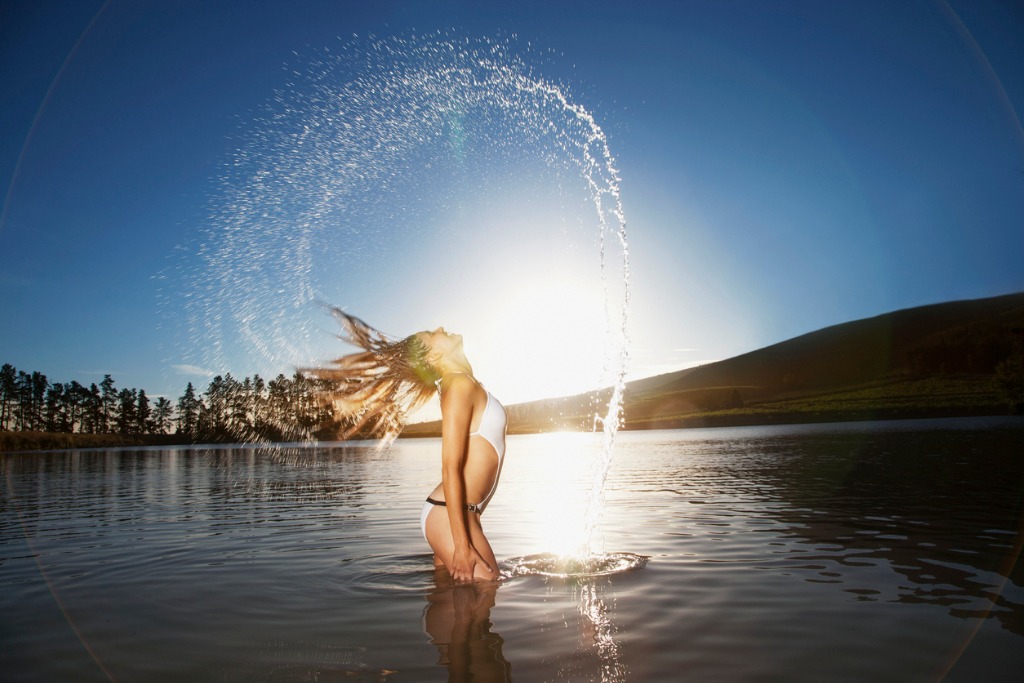 What sets this photo off is the fact that the model and the water she's flipping into the air are backlit by the golden hour sunlight.

The glint of the light off the airborne water droplets adds a ton of drama to this shot.

But also notice that the model is frontlit, too.

Adding artificial lighting to brighten your subject in a backlit shot will help you achieve this look. 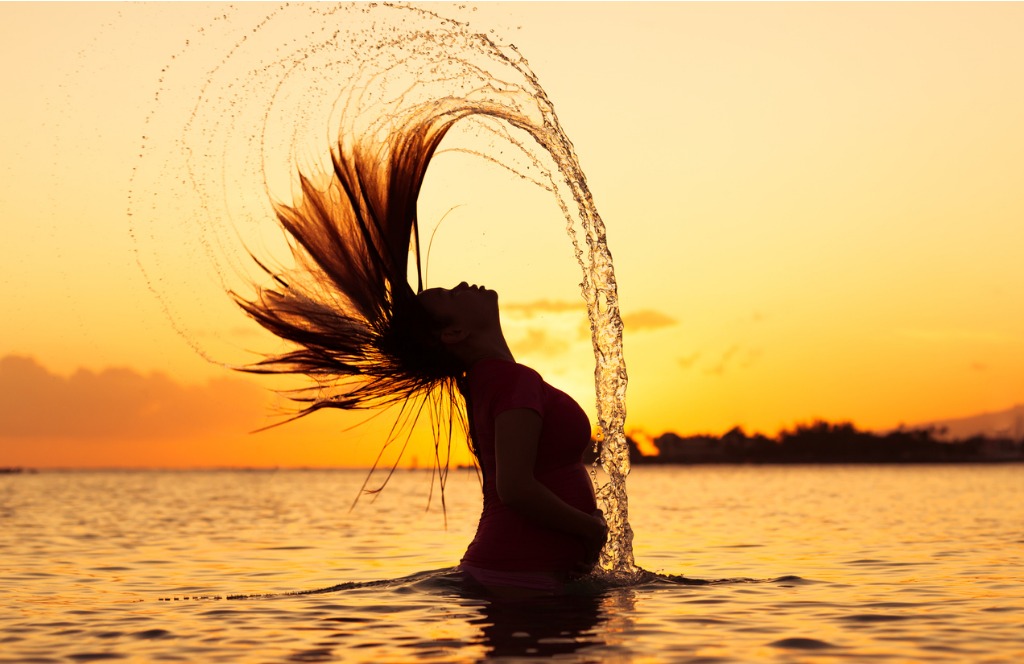 Of course, backlighting also gives you an opportunity to create beautiful silhouettes, as was done in the image above.

Again, you see how the soft, warm lighting beautifully illuminates the water in the air, and the reflection of that light off the water brightens the shot.

When creating silhouettes, you'll want to get a meter reading off the sky, that way it's properly exposed and the model remains dark. 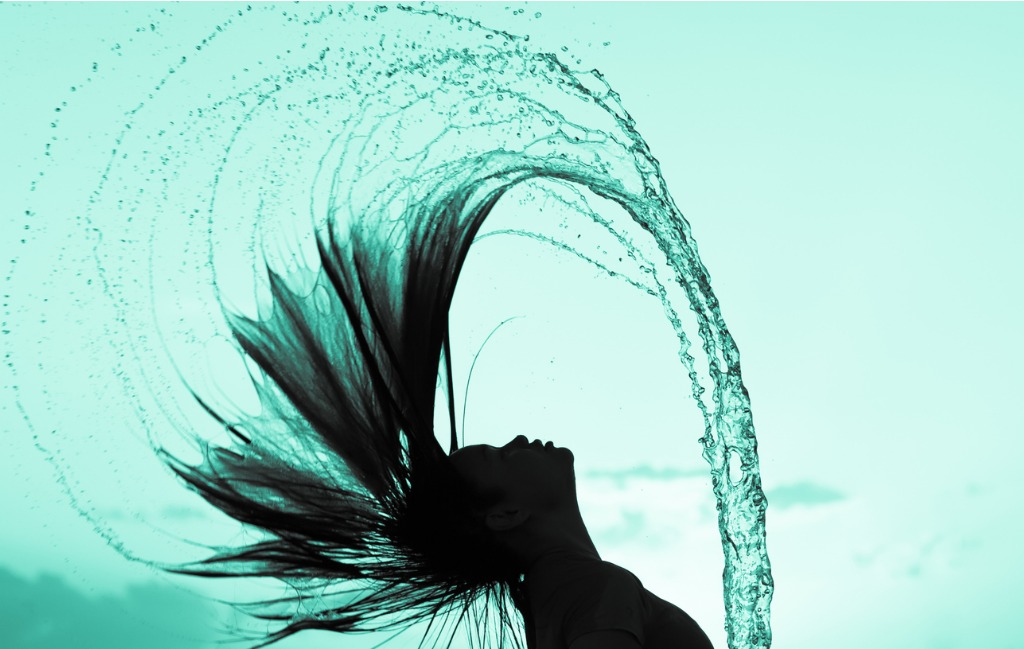 Though this shot is cropped a little too tightly for my personal tastes, I still rank it among the better water hair flip photos that I've seen recently.

What I like about this shot is twofold: the structure of the model's hair and the soft, greenish-blue backlighting.

Of course, the form that the water has taken in this shot is also quite impressive... 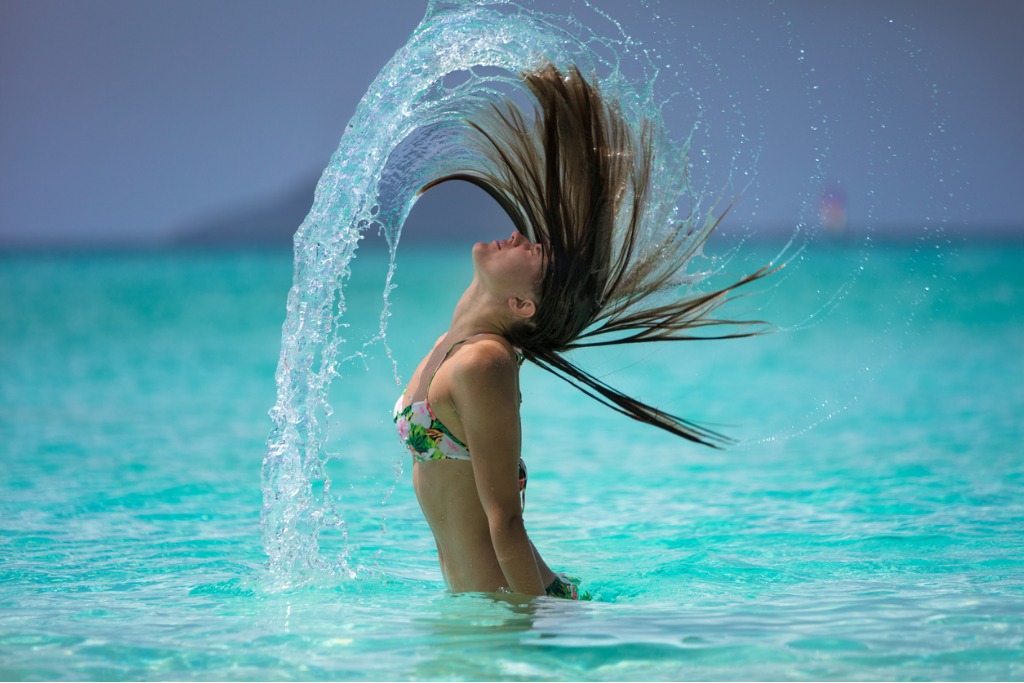 Like the previous shot, this one has great structure in the model's hair and in the water as well.

But I also appreciate the wider frame that gives us a view of the crystal blue waters in the foreground to give the photo more of a tropical vibe.

The detail in the background - though gorgeously blurred - is also a nice touch that gives this shot a little bit more depth. 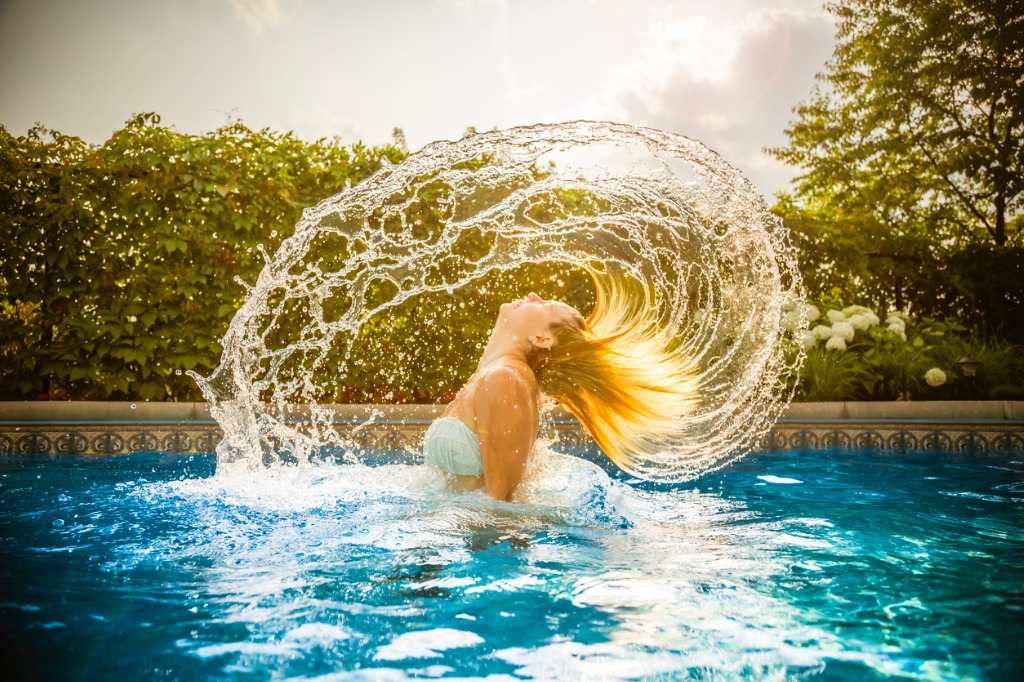 I think the claim to fame for this shot is the sheer volume of water that this model was able to get airborne. That's a lot of water!

I also appreciate the light that illuminates the model's hair - not only does this give this shot much more drama but it adds a touch of brightness to the shot as well. This is important because there are so many darker tones in the image between the blue water and the green hedge. 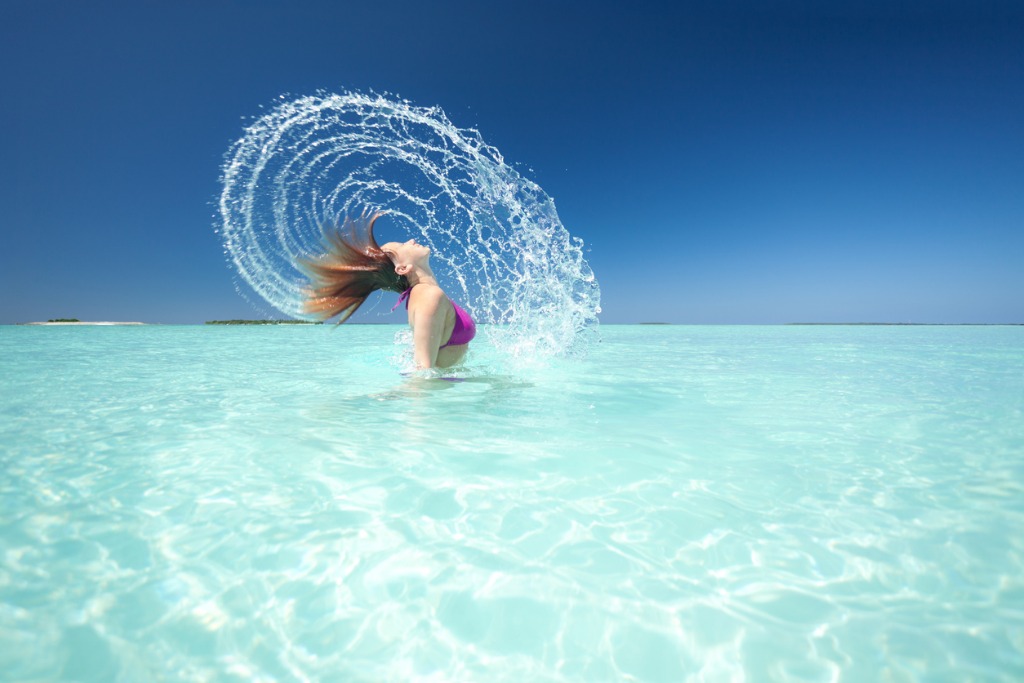 This water hair flip photo caught my eye because of the perspective of the shot.

Notice how this image was taken from below the model's eye level, which makes her (and her hair flip) feel more grand in the frame.

I also like how this photographer used a wide-angle lens to incorporate more foreground into the shot. The ripples on the water make a nice, eye-catching pattern that draws you into the image. 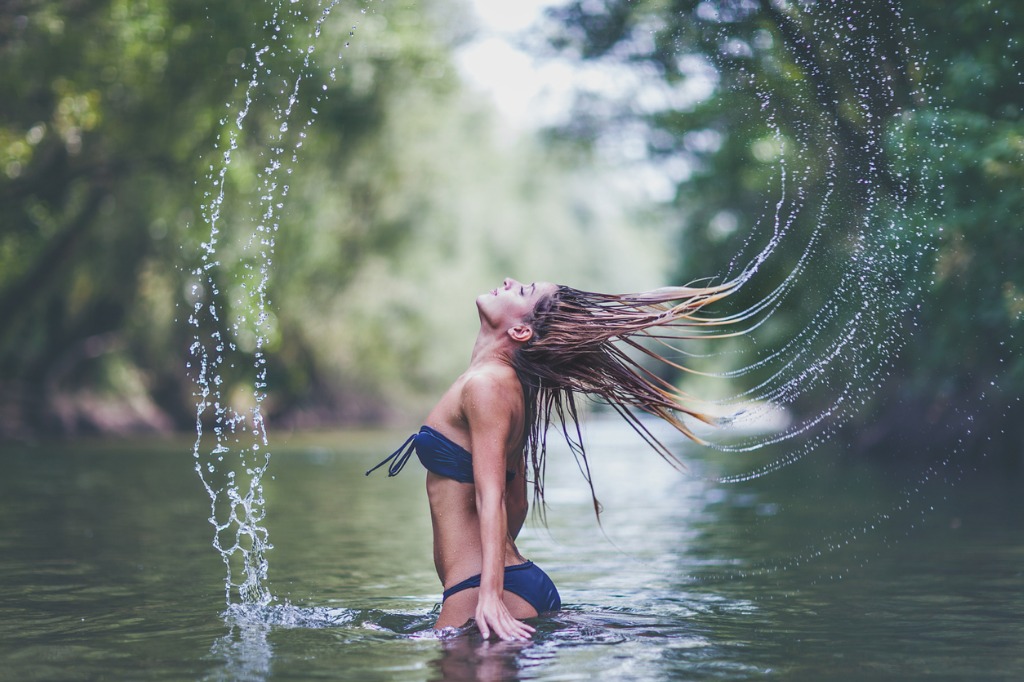 This shot doesn't involve a ton of water being flipped into the air, but what it does have is perfect framing.

Though we're taught to avoid placing the subject in the middle of the frame, it works in this case.

Notice how the model and the water flip are perfectly focused, and with the awesome bokeh happening in the background, it creates a nice contrast for this image.

Editor's Tip: After you take a gorgeous water hair flip photo, turn it into a fine art print. See what your photos look like as fine art.

Of course, we can't look at beautiful water hair flip photos without also taking a peek at a few fails, too... 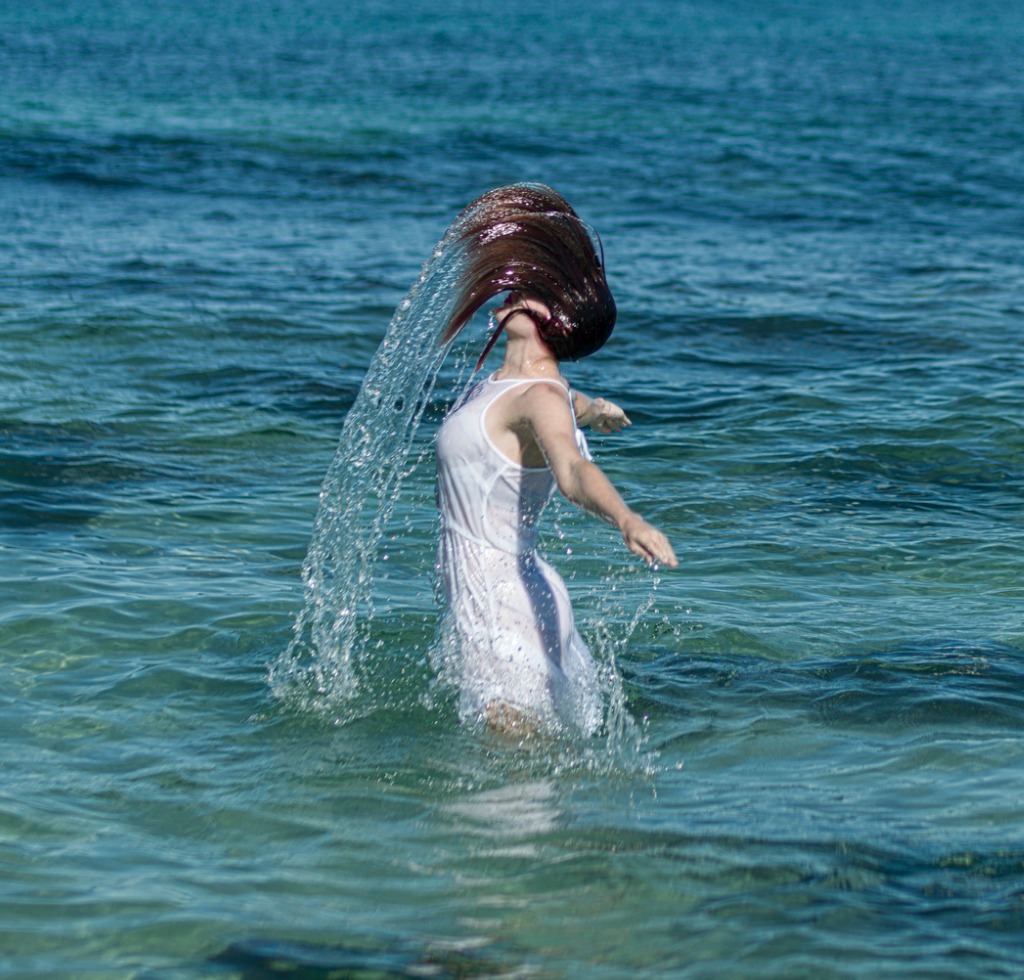 There's nothing like a face-full of wet hair to wake you up in the morning...

To be a success, these kinds of photos need to have much more motion with the hair further away from the face. 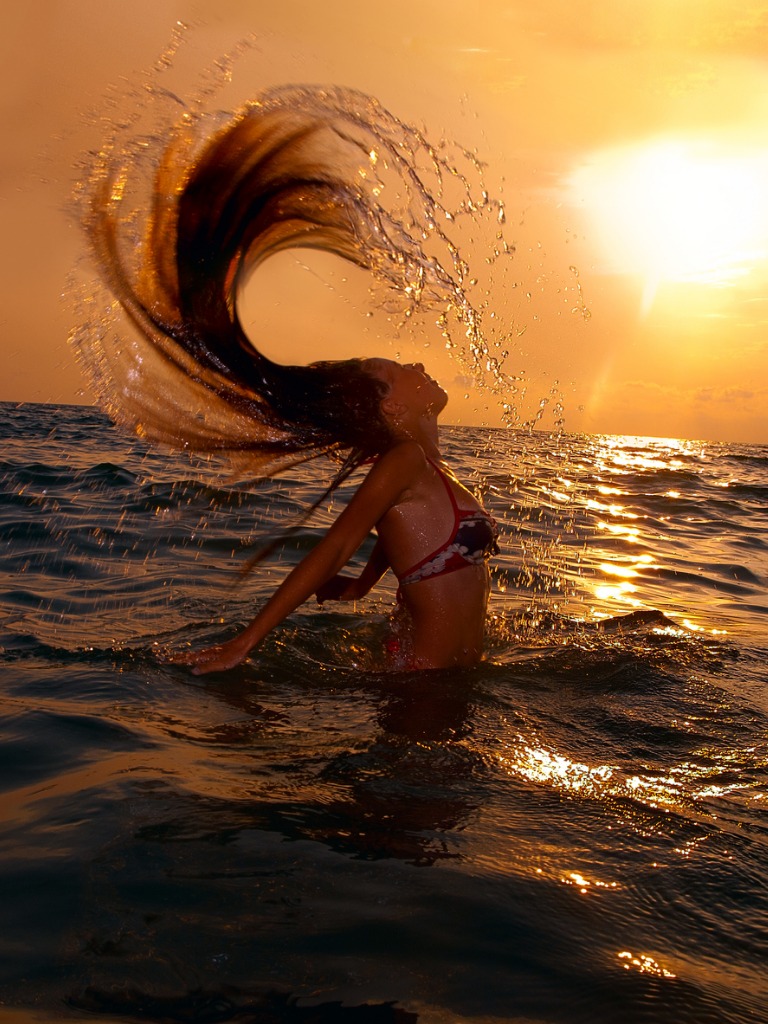 Though there's a lot to like about this shot, there's one thing that completely ruins it - the crooked horizon.

When taking action portraits, there's a lot to think about, but that doesn't excuse you from paying attention to other details in the shot.

Besides, a crooked horizon is easy to fix in post-processing, so there's really no excuse for the horizon not being perfectly flat in your photos! 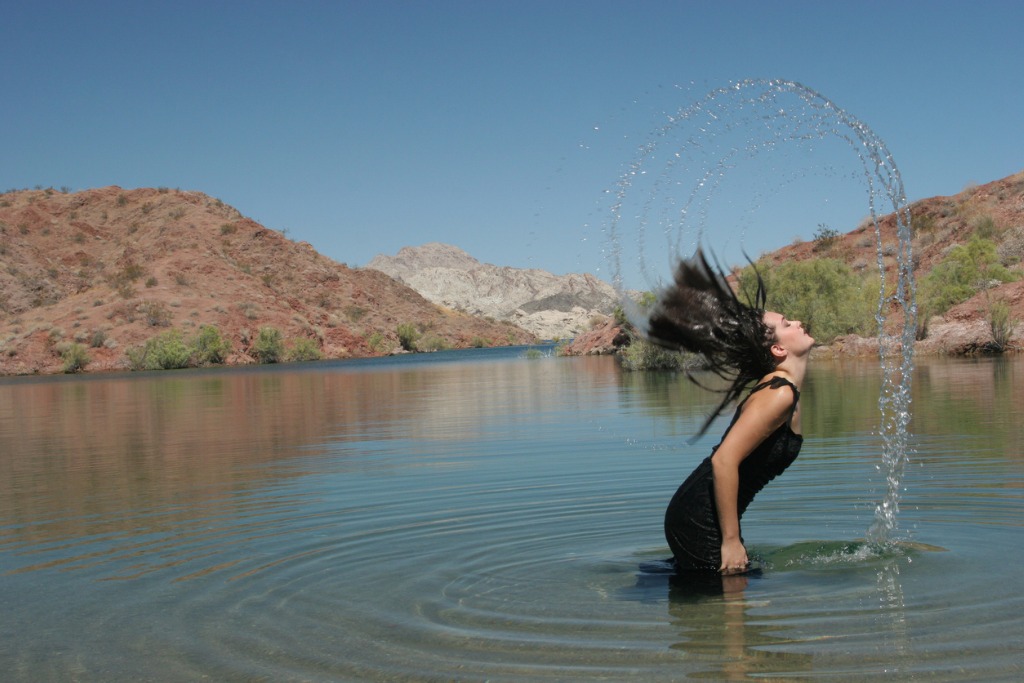 Not only does this shot sport a crooked horizon, but it also suffers from terrible composition.

You want to give the subject "room to look," which in this case would mean putting the model on the left side of the shot since she's looking to our right.

As it stands, this photo feels cramped because the model is jammed up on the right side of the shot. 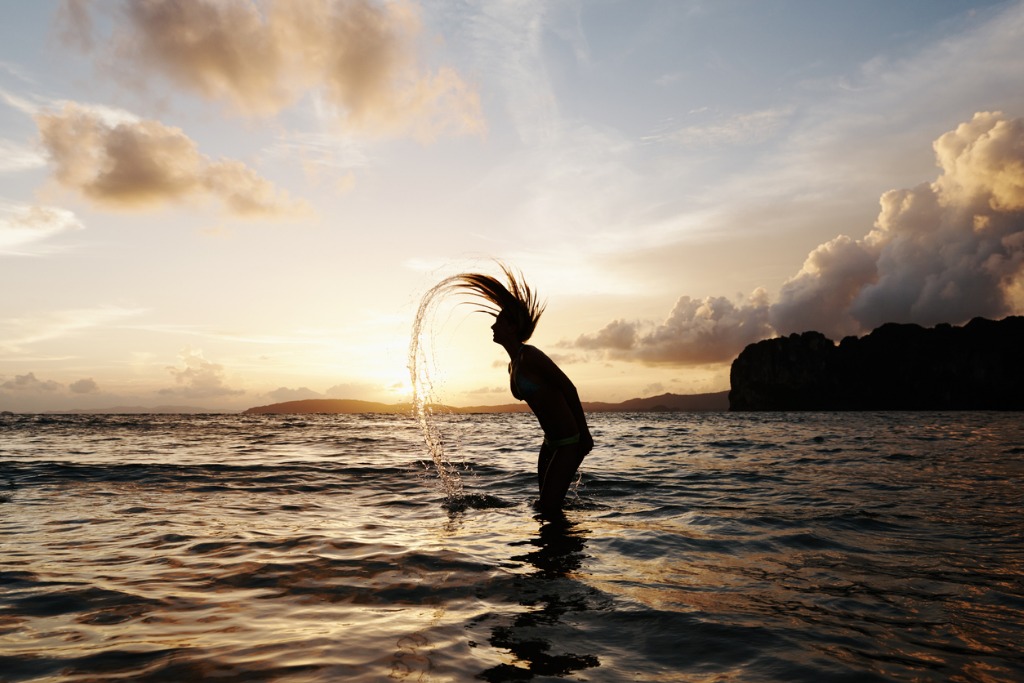 As noted earlier, timing is everything with these sorts of shots.

And unfortunately, this example suffers from poor timing.

What you want to do is time the shot for the apex of the hair flip, that way you capitalize on the height and motion of the shot (and the best posture, too). 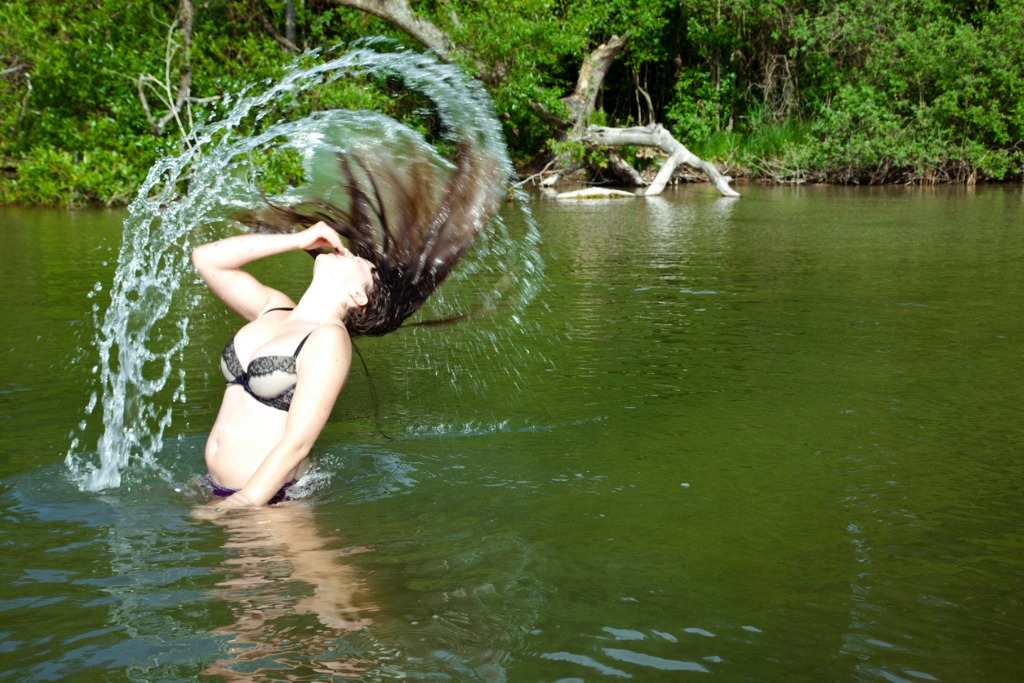 In another example of poor composition, we see the model crammed against the side of the frame.

As if that's not bad enough, the photo isn't even in focus! 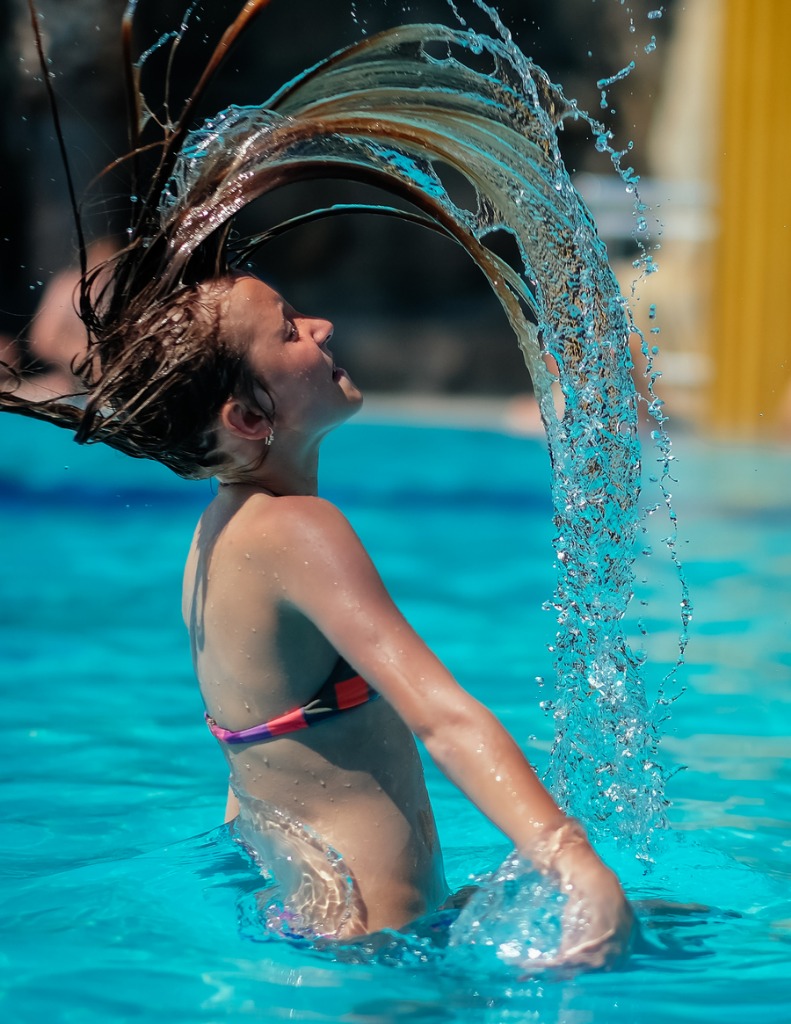 I appreciate close-up portraits that are done well.

Unfortunately, this one is not done well...

To get the full effect of the water hair flip, you need to compose the shot in a way that allows the viewer to actually see the hair and water flipping!

Editor's Tip: Thinking about getting a new camera? Learn why you should upgrade your lens first. 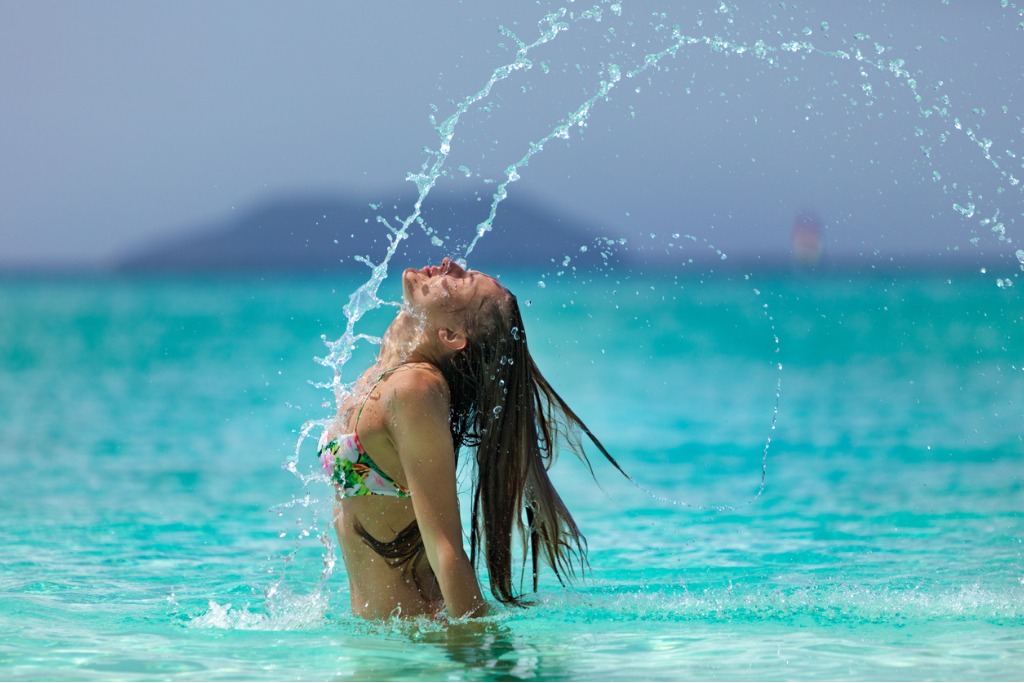 Again, we see an example of a hair flip portrait in which the timing was off.

Using shutter priority mode and a very fast shutter speed (i.e., 1/2000 seconds) in burst mode should enable you to capture a sequence of images in which at least one of them captures the apex of the hair flip to maximize the look of the shot.

To end, here's a quick video of a real-life water hair flip fail that went wrong in all sorts of ways.