By now, it's no secret that Google Earth is an incredibly powerful tool that has allowed everyday people like you and I to explore areas of the world that we would otherwise never get to see.

That fact alone makes it one of the best photography inventions of all time, if you ask me.

But throw in the fact that Google Earth (and Google Maps, too) takes photos of some really weird things, and you have the makings for one heck of a way to entertain yourself.

Here's just a sampling of weird Google Earth images from around the world. 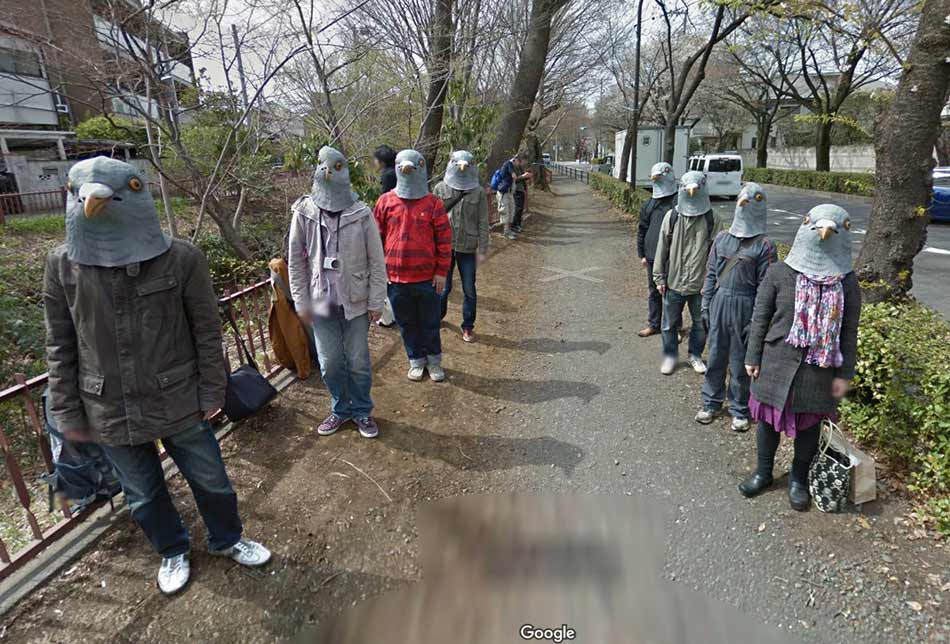 Google doesn't need to send its cameras into space to find wild things to photograph.

A few years ago while conducting street view photography, one of their cameras captured this strange scene of people dressed like pigeons.

Apparently this is a thing in this area of Japan - to do pigeon role play. So, in other words, no, they didn't do this just for the benefit of Google's cameras!

Editor's Tip: Not sure how to work your lens properly? Learn how to read the markings on your lens. 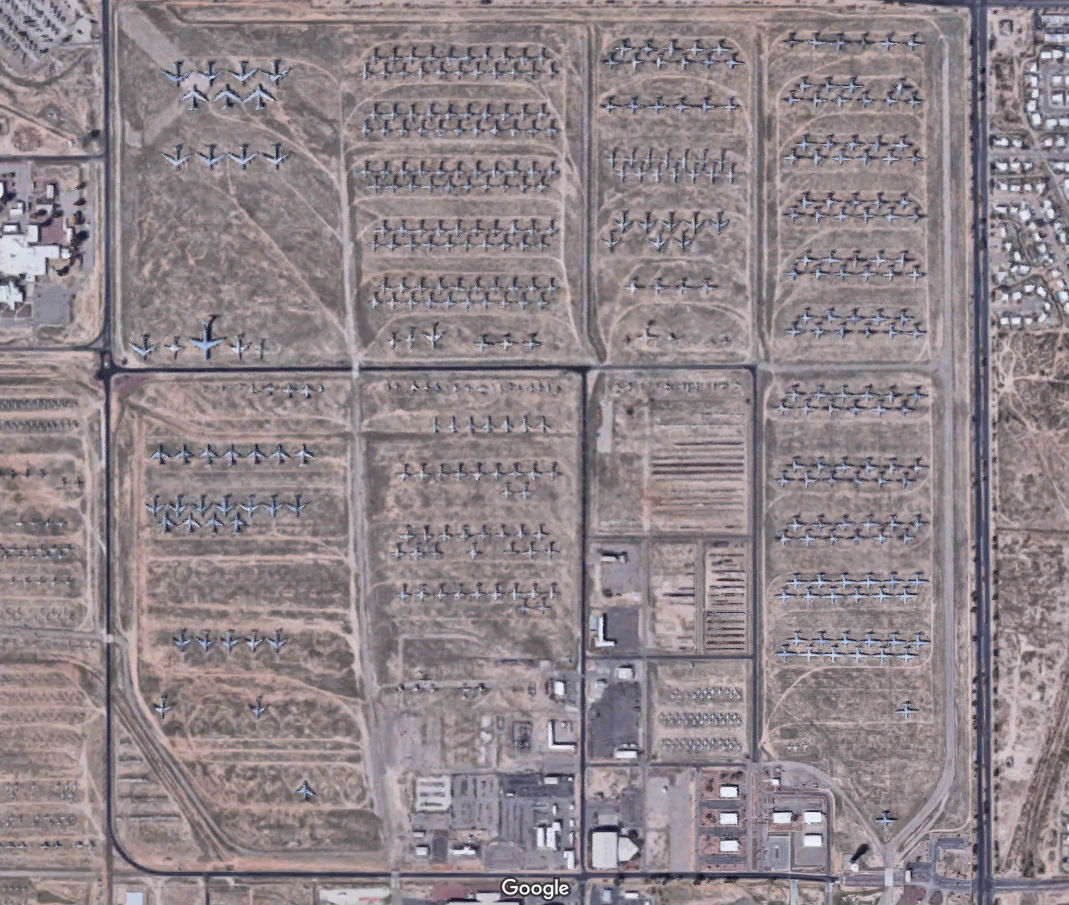 This photo isn't as much weird as it is really stinking cool.

If you've ever wondered where airplanes go when they're retired, it's to an airplane boneyard like this one at Davis-Monthan Air Force Base in Tucson, Arizona.

This is actually the largest airplane boneyard on earth, and though many of the planes here will never fly again, some will re-enter service if need be. 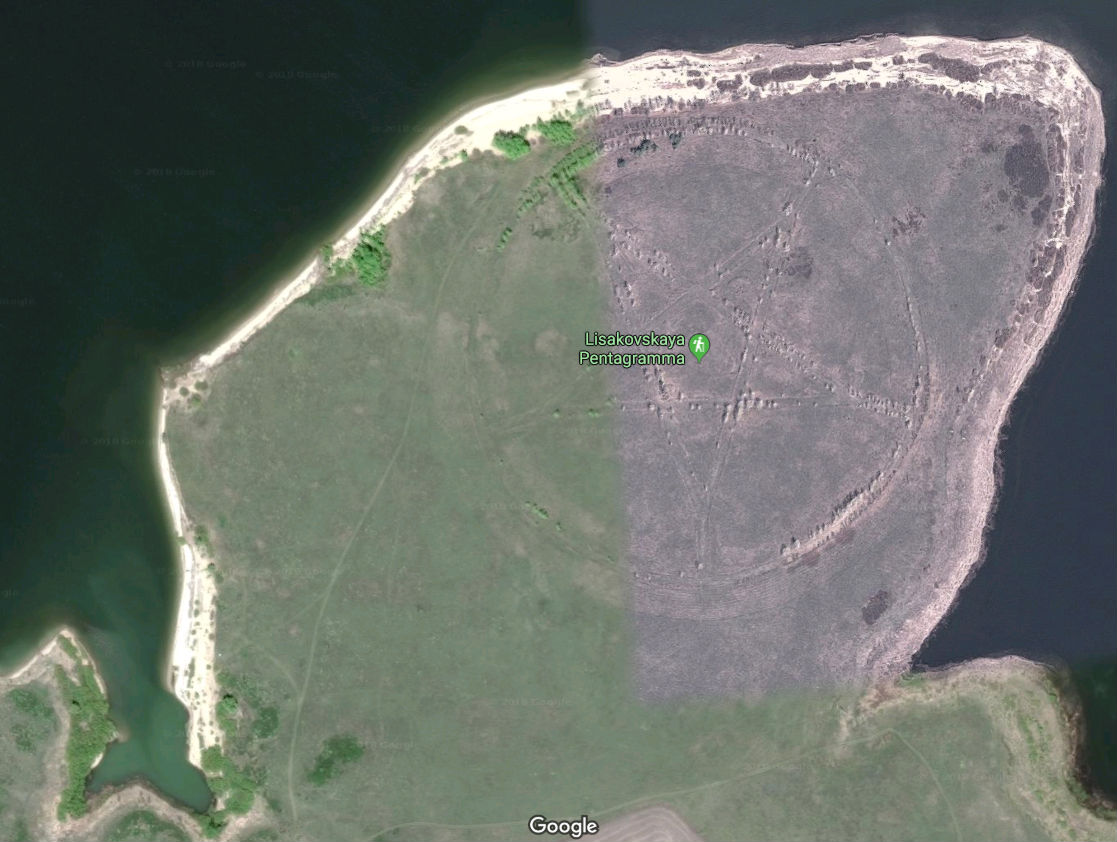 Kazakhstan has a lot of very, very remote places, and one of them just happens to be home to a humongous pentagram, at least on first view.

Glancing at the screenshot above, it's hard not to come to the conclusion that this must be some sort of devil-worshipping center.

As it turns out, though, the pentagram shape is nothing more than pathways made in the shape of a star. 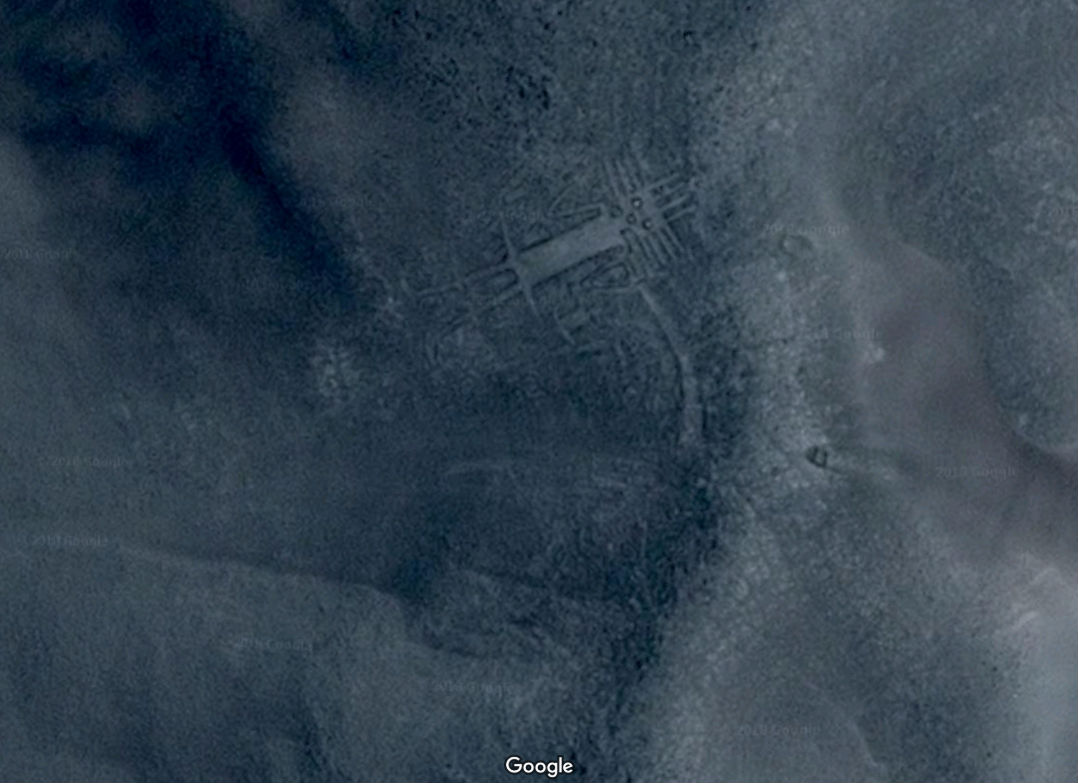 Unlike some of the strange things that are photographed by Google that trick your eye into thinking they're something they aren't, the Atacama Giant shown above is 100 percent real.

This huge cat-like feature is a 390-foot-long geoglyph that was carved into the side of a hill in the Chilean desert sometime between 1000-1400 AD.

A Face in the Canadian Badlands 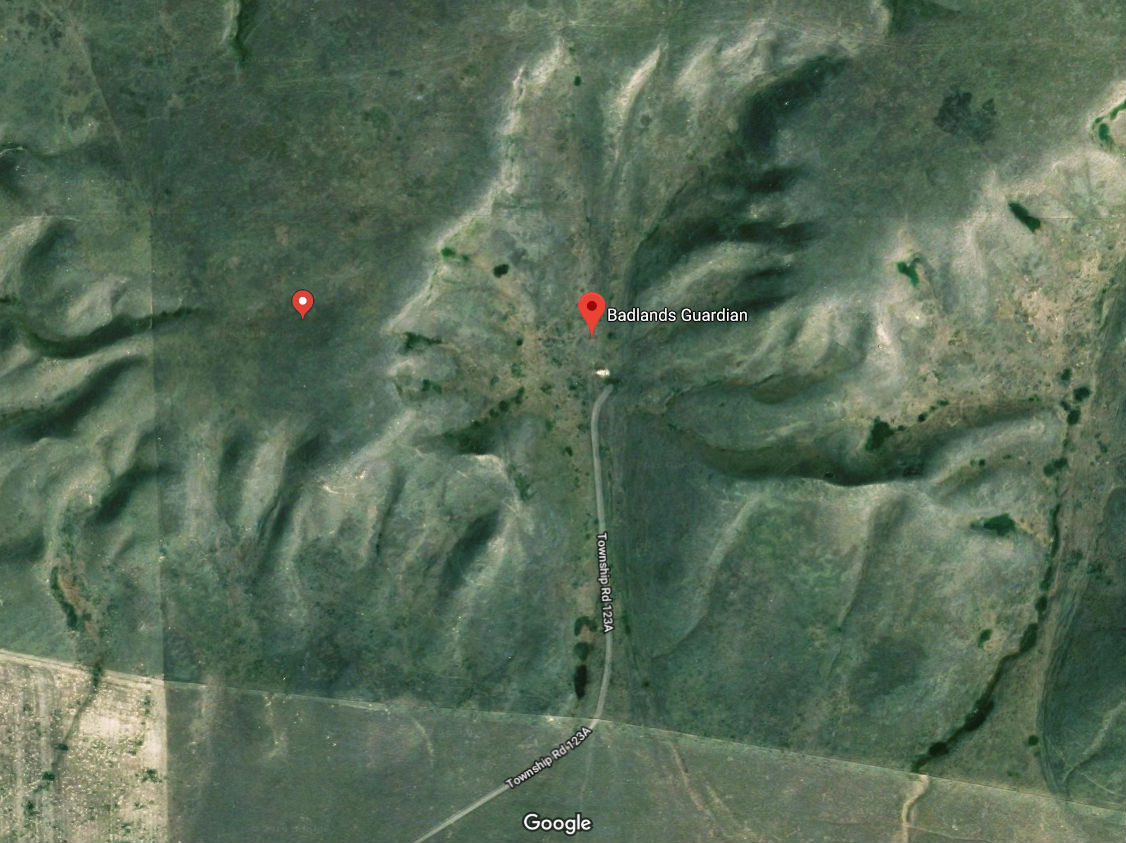 This "face" is actually a series of hills and other geological features that look a whole lot like a person.

You can see the outline of the "Badlands Guardian," including its forehead, sharp nose, lips, and chin.

Above the waypoint and to the right, you can see what looks remarkably like a headdress as well.

A "UFO" in Romania 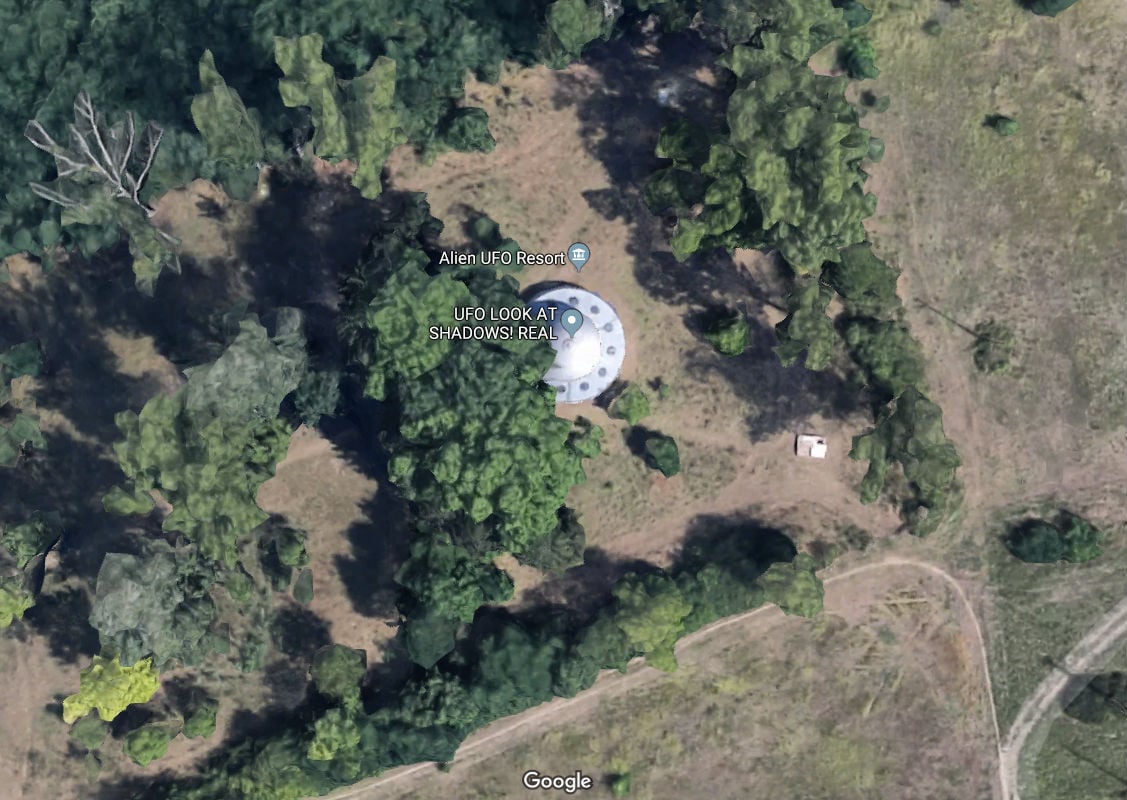 This shot of a heavily forested area in Romania seems to reveal a UFO just hanging out in the woods.

Of course, not everything is as it seems because this is actually a really cool water tower, despite there being a waypoint that say that it's an "Alien UFO Resort." 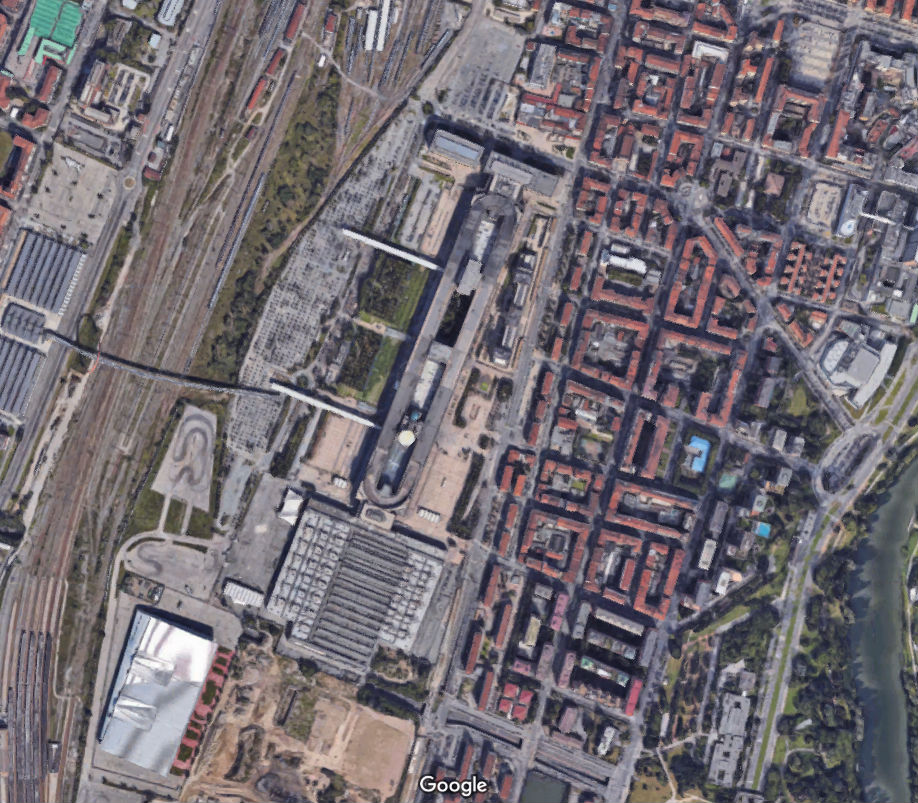 Granted, this shot doesn't look all that weird, but the story behind the oblong building certainly is.

The Lingotto Building in Turin, Italy was once a factory for carmaker Fiat.

The vehicles made at the factory would actually be tested on a track built on the building's roof.

Though the factory closed in 1982, the building remains and is now a shopping center and a hotel - complete with the test track still on the roof!

Editor's Tip: Great photos deserve to be printed and hung on the wall. See what your photos look like as fine art. 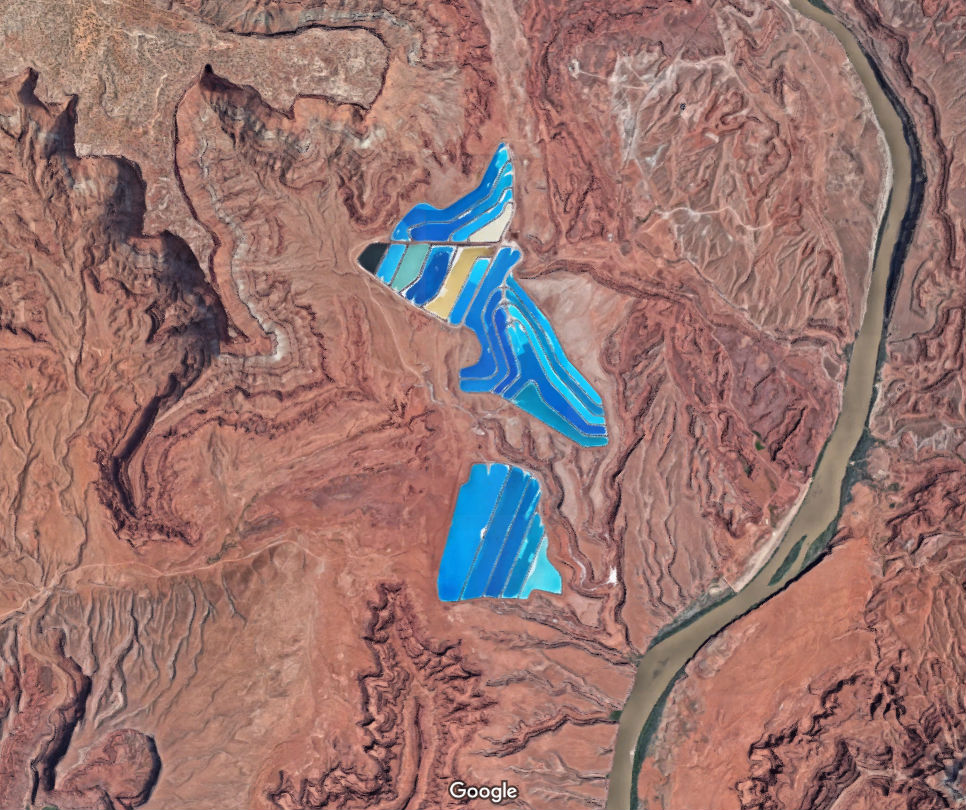 Though these bright blue features in the Utah desert might look like huge stained glass installations, they're actually something much less benign.

These are actually potassium chloride evaporation ponds at a potash mine near Moab. 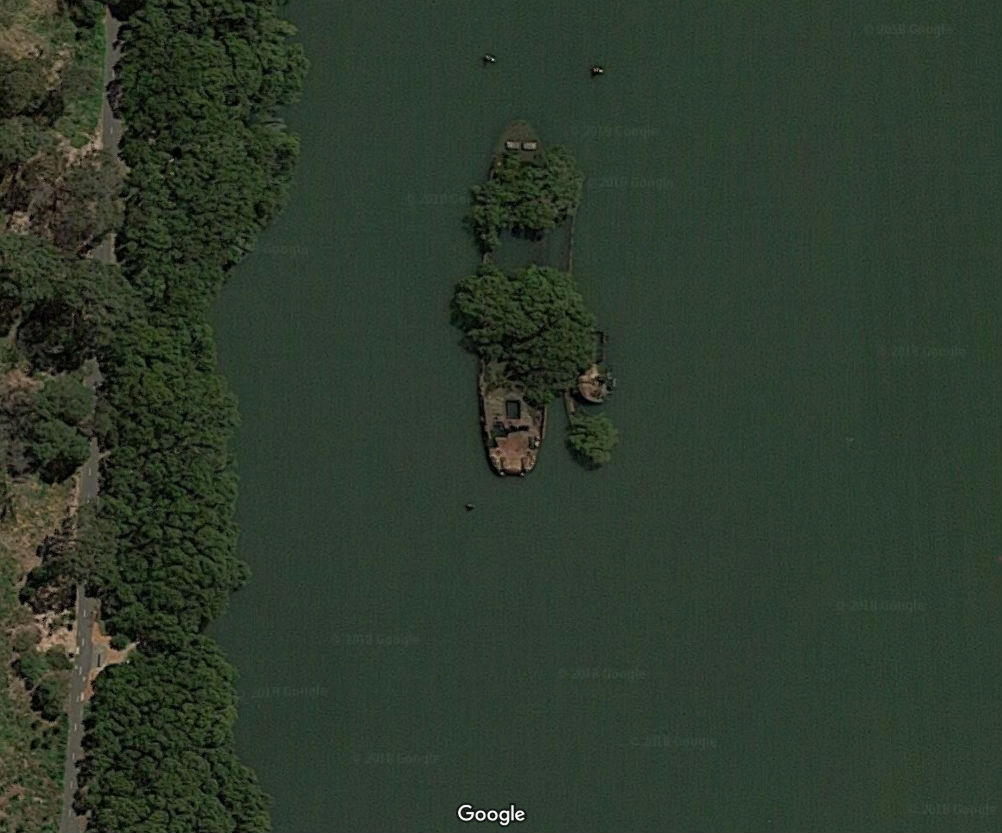 This non-descript looking island has an interesting story...

It's actually a shipwreck in Homebush Bay in Sydney, Australia.

The ship, the SS Ayrfield, actually still floats, but is slowly being taken over by a grove of mangrove trees. 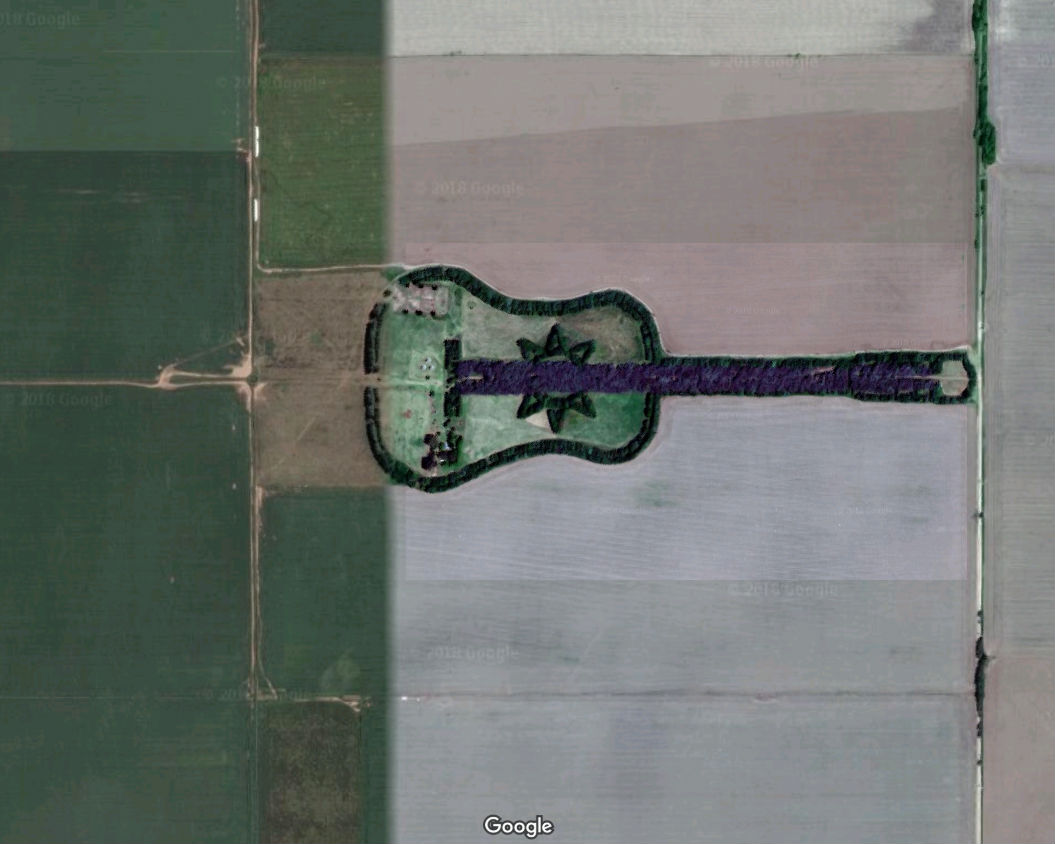 Again, this is another feature that isn't an optical illusion - this really is a giant guitar.

It's called the Guitar Forest, and was built by Pedro Martin Ureta in honor of his late wife.

The forest is an astonishing two-thirds of a mile long and includes over 7,000 trees.

"Alien Structures" in the Desert 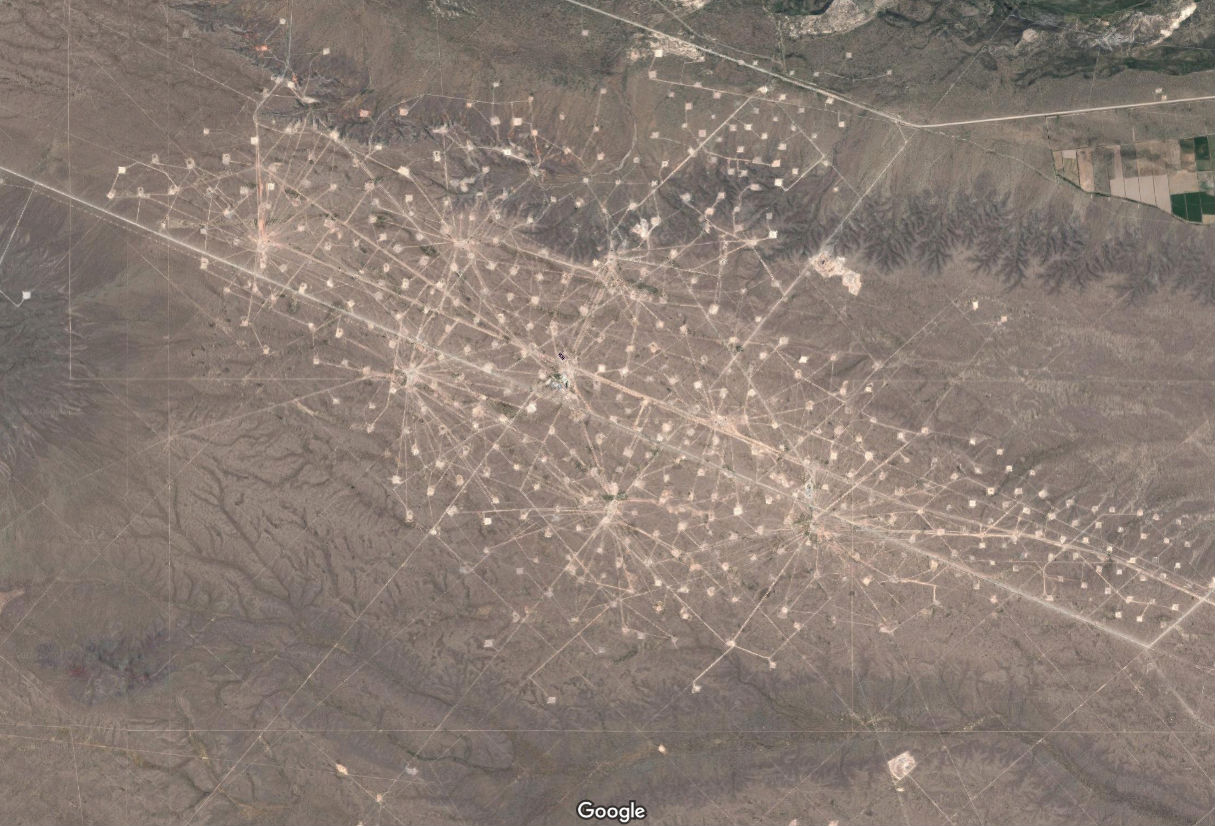 What appears to be alien pods connected by hundreds of walkways is actually something totally of this earth...

This is an oil field in Rio Negro, Argentina.

The "pods" are oil pumps and the lines are the many different roads to access the pumps.

Whether it's something totally weird, something that looks weird or is totally benign, or something in between, Google Maps and Google Earth sure have found some crazy things as they scan the planet.

These are just a few examples of weird things on Google maps and strange Google Maps photos.

For a sampling of some of the creepiest Google Earth images ever taken, check out the video above by American Eye.

Via BT, The Telegraph, and Twistedsifter