Photographer Says "Yes!" to Boyfriend Who Proposed With a Camera Tattoo 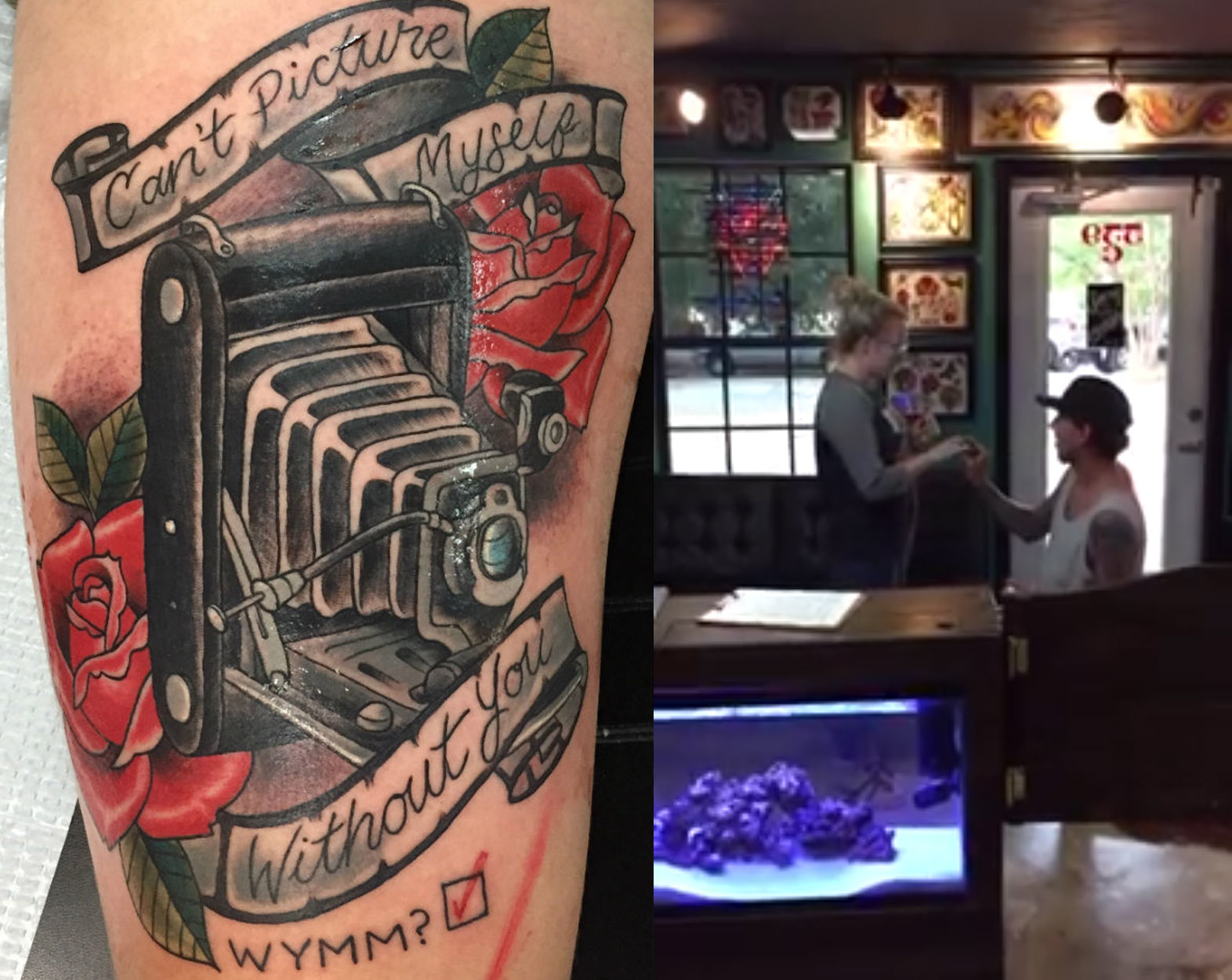 Last week, Charlene Trickey, a professional photographer from Florida, got a call from her boyfriend, Travis Durham, who works as an electrician when he's not serving as second shooter for her at weddings.

He told her that after working eight hours in 90-degree weather that he was feeling light-headed and sick. He needed her to come pick him up at Old Glory Tattoo in Tallahassee where he'd stopped to get a new tattoo.

What Charlene didn't know at the time is that Travis had planned an elaborate marriage proposal, the centerpiece of which was a tattoo of a vintage camera and the text, "I can't picture myself without you. WYMM?"

You can see the whole thing go down in the video below - be warned, there is some strong language. Learn more about picture poses for guys on our website PhotographyTalk.com.

Since Travis typically worked such long shifts and because it was so hot, Charlene didn't think anything of his request to come pick him up.

"It seemed legit," Charlene said in an interview with PhotographyTalk. "So, I headed to Old Glory."

When Charlene walked into the tattoo shop, Travis said he wanted to show her his new tattoo, so he extended his arm, but there was nothing there.

For a moment, Charlene was confused, as you can see in the video above. That is, until he revealed the proposal tattoo on his right thigh, took a knee, and proposed. You can also check another post about guy poses for pictures. 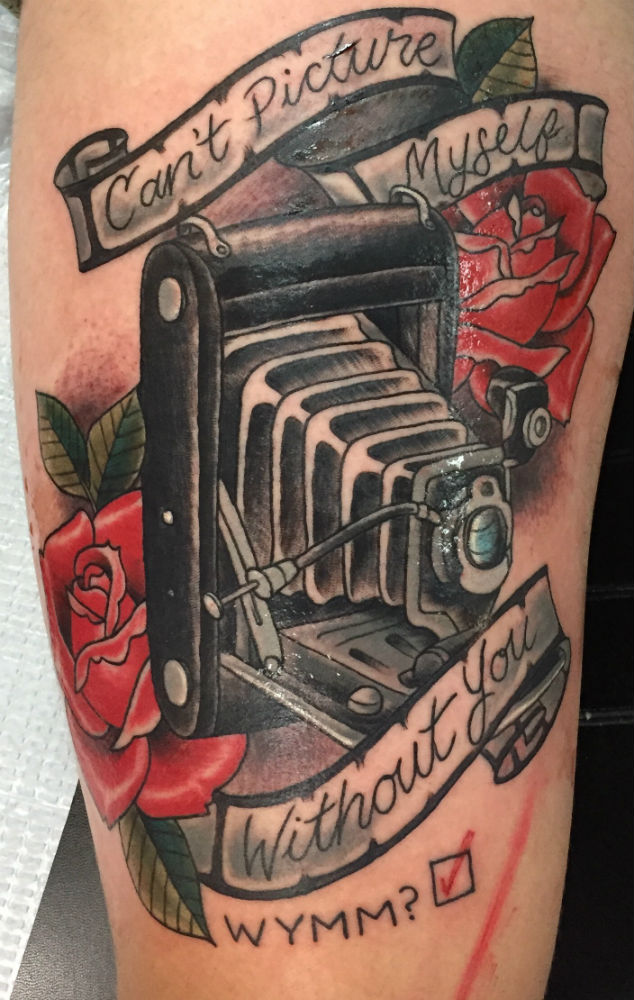 As Charlene tells us, her first thought upon seeing the tattoo "was a lot of profanity and shock. It felt like it may have been a fake tattoo, but oh, it was very real! I was amazed at his level of commitment and dedication. I love it!"

Editor's Tip: Not sure what lens is best for portraits? Learn why an 85mm lens might be the best portraiture lens there is.

There was never any doubt in his mind, though. It was love at first sight for him (and her too) when they first met at a wedding years ago.

"I knew I had my work cut out for me after photographing and seeing so many amazing weddings," says Travis. "I wanted to give Charlene something she would never forget; making sure to include all of her favorite things - photography, tattoos and my love for her. Plus, we’re always in competition to see who has more tattoos."

Travis also took the time to get the blessing of Charlene's boys, too: 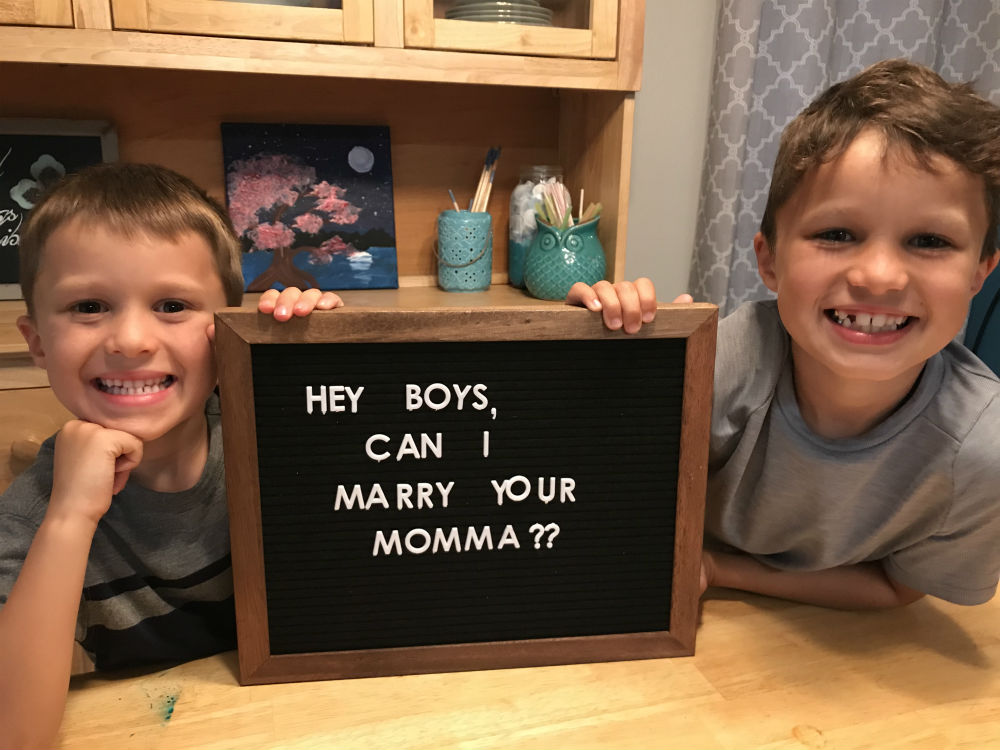 So, after about two-and-a-half hours getting the original tattoo, Travis sat back down while Charlene (with the help of the tattoo artist) finished the tattoo...

She added a red check mark in the box labeled "WYMM?" to complete the process, as you can watch in the video below.

I've seen a lot of awesome proposals over the years, but this one has to rank at the top of the coolest ways to propose to a photographer.

Thank you to Charlene and Travis for sharing their story with us and for providing us with the images and videos that Brandon at Old Glory Tattoo took of the big proposal.