Man Wades Into River for Selfie With Feeding Bears, Gets in A LOT of Trouble

First, the selfie I take with my son each day when I drop him off at school.

And second, tourists with selfie sticks that seem to have little regard for the personal space of other people.

What I do not think of is grown men wading into bear-infested rivers to get the ultimate selfie.

Yet, that's the world we live in now, so I shouldn't have been surprised when I came across the video below.

As you'll see, this guy, who was with two other people in Katmai National Park and Preserve in Alaska, casually waded into a river chock full of feeding brown bears as though it was no big deal at all.

Approaching wild bears is dangerous at any time of year, but my guess is that doing so while bears are competing for food is probably one of the worst.

The video above was recorded by the park's explore.org bear cam and posted on YouTube by Erum Chad. The bear cam documents the robust bear activity in the area.

In fact, the area was closed to the public for a month straight due to a very high concentration of bears in this exact spot. It only reopened days ago on August 15th.

Editor's Tip: Looking for your next photography adventure? Learn why the Pacific Northwest is a photographer's playground.

Though the bears seem to give no attention to the guy, the whole ordeal could've ended very badly for the selfie-seeking man.

In an interview with People Magazine, Mark Sturm, the superintendent of Katmai National Park, underscored the seriousness of the situation.

"People need to recognize that these are wild brown bears. These visitors are lucky that they escaped the situation without injury," he said.

He explained further that "the possible consequences for the bears and themselves could have been disastrous." 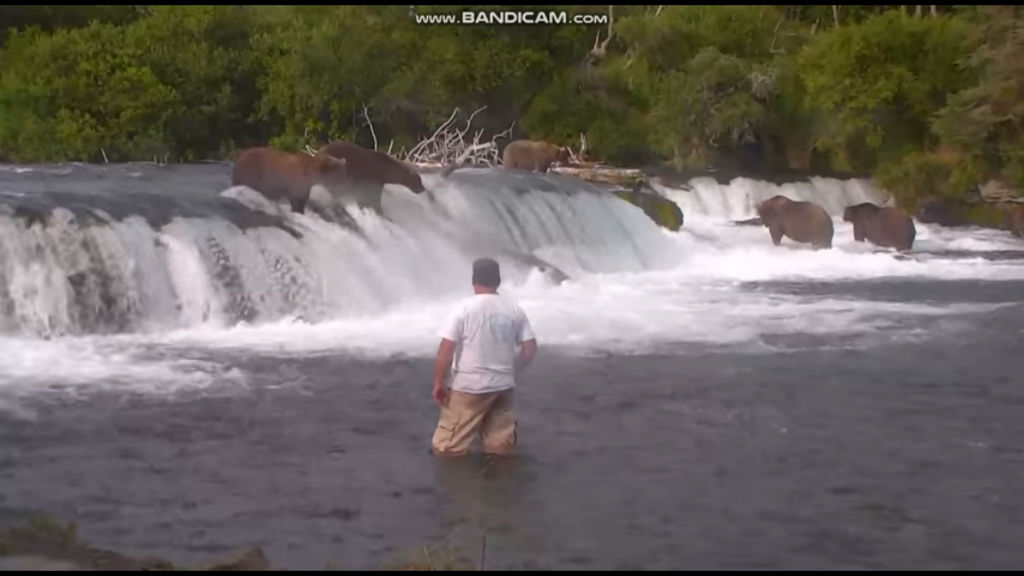 The NPS further noted that "immediately after the incident, Katmai rangers received multiple reports from concerned visitors and explore.org bear cam viewers who observed the violations.

"The group was contacted by park rangers and charges are pending," the statement further detailed.

Lately, we've seen tourists fighting over selfie spots, models getting bitten by sharks as they pose for the perfect shot, and drunken tourists antagonizing wildlife in Yellowstone, and that's just in the last couple of weeks.

All of this crazy behavior underscores the modern obsession with the perfect selfie and a willingness to risk life and limb to get it.

I'm all for finding new and different perspectives and working to find ways to get better photos, but folks, this is not how you go about it!

Via People Magazine and the National Park Service