How to Photograph the Night Sky 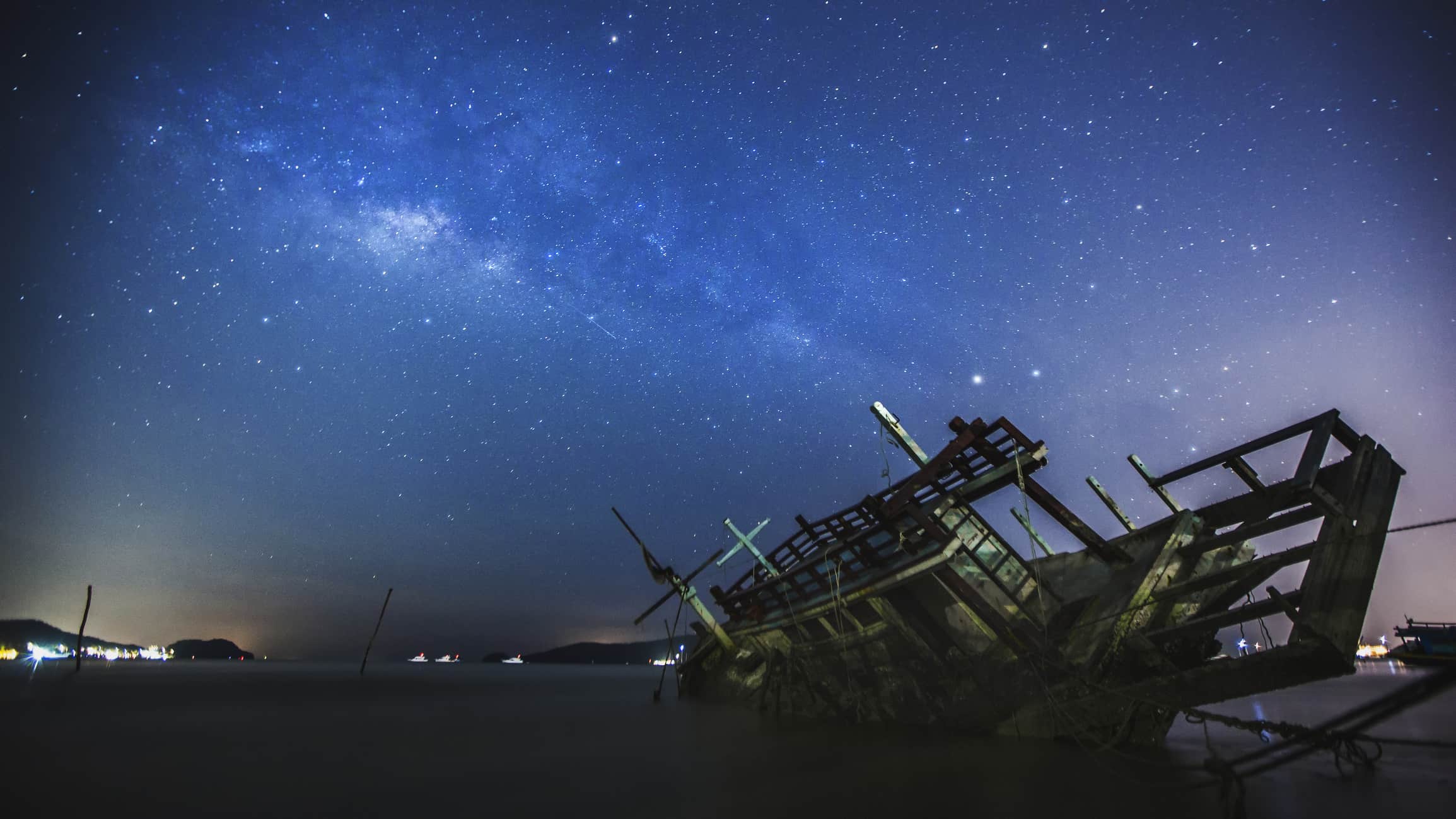 There are plenty of ways to create incredible images of the night sky.

This includes stars that appear as pinpoints, star trails, and timelapse videos, just to name a few.

In this article, we offer an overview of these and other techniques you can use to photograph the night sky.

Editor's Tip: A great way to get started in astrophotography is to use a star tracker mount like the Vixen Polarie, which is compatible with any standard tripod and can accept any digital camera that weighs up to 7 pounds. The Polarie has a compass for orienting the mount to face north, a North Star alignment window for easier alignment, and can track the motion of the stars as they move across the sky to eliminate star trails. Learn more about the Vixen Polarie Star Tracker Mount by visiting their website. 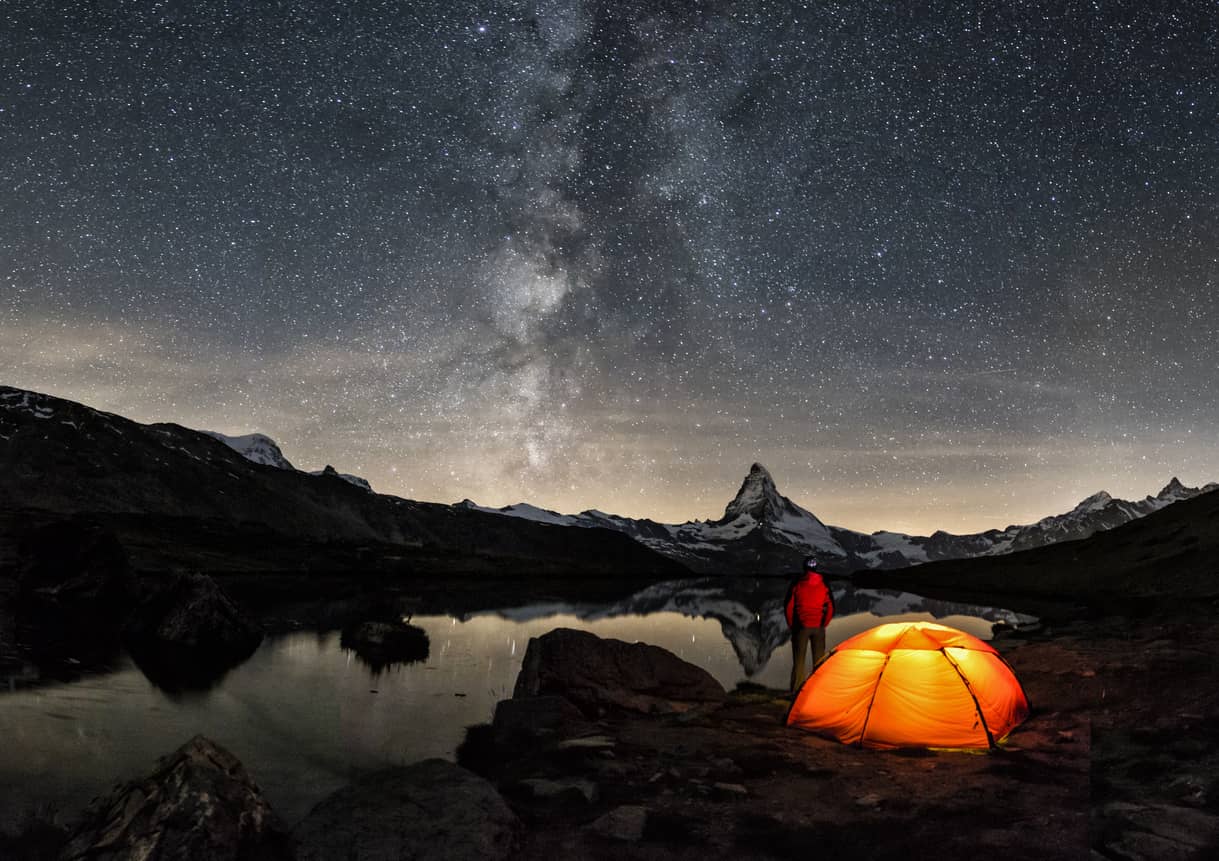 When deciding whether you will represent stars as points of light or as trails, think about what the scene offers in terms of visual interest.

For example, if there is a lot of interest in the foreground of the shot, pinpoint stars might be the way to go. That's because they offer a nice complement to the scene that doesn't overtake what's going on in the foreground.

To get pinpoint stars, you need special gear to track the stars as the earth moves, like the Vixen Polarie Star Tracker Mount I recommended above. Watch a quick tutorial on how mounts like this work in the video below:

As far as camera settings go, start with an f-stop that's nice and wide, like f/1.2 or f/1.4 (or the widest your lens allows) and a shutter speed in the neighborhood of 20 seconds. If needed, increase the ISO to get a better exposure, bearing in mind, though, that the higher the ISO, the more noise that will be evident in the shot.

For a little extra drama, consider lighting the foreground of the shot by light painting with a flashlight or a headlamp. 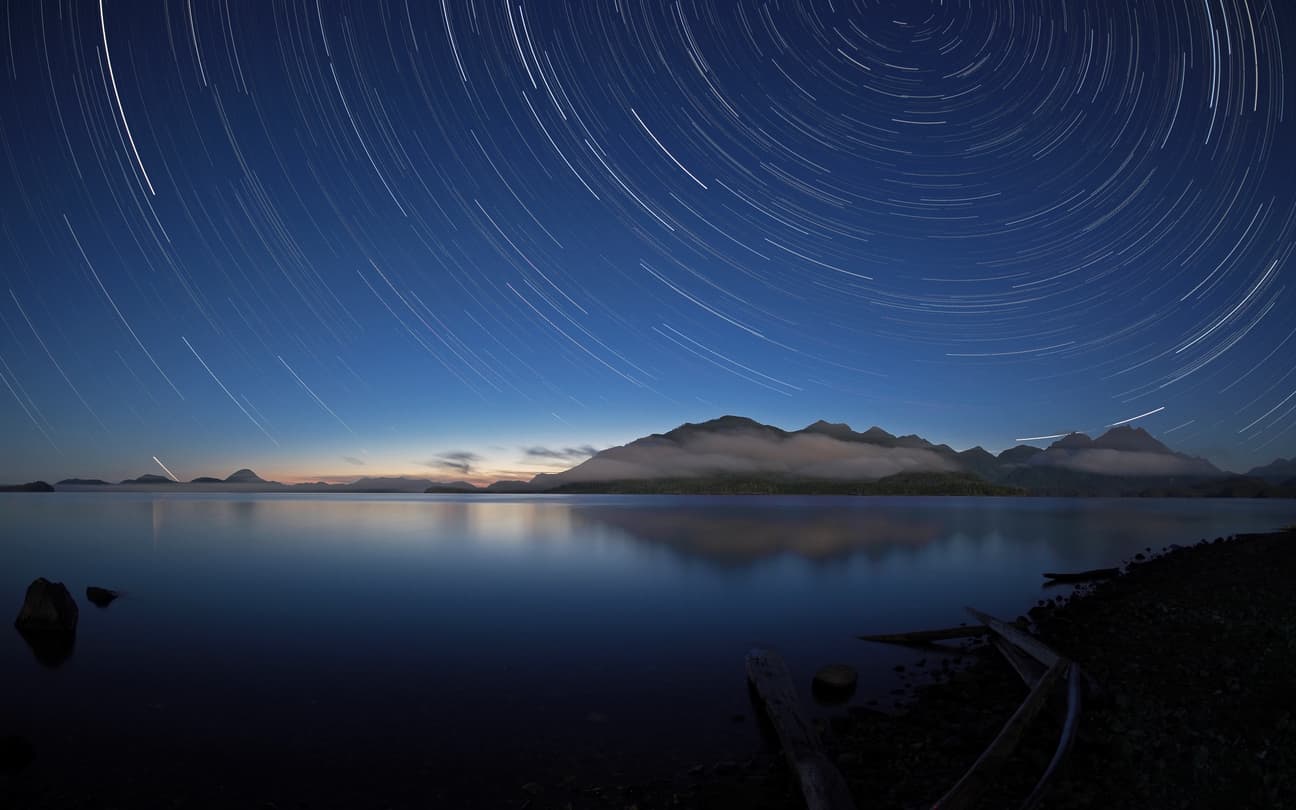 To shoot light trails, you really only need a camera, a lens, a tripod, and a remote shutter release.

The rest is left up to the earth as it rotates on its axis, making the stars and other celestial bodies appear as though they're moving across the sky.

You can capture that movement by using your camera's bulb mode to take a long exposure image.

The length of the exposure will depend on several factors, perhaps most important of which is how long you want the star trails to appear.

Get a complete rundown of taking star trails images in the video below by Tony and Chelsea Northrup: 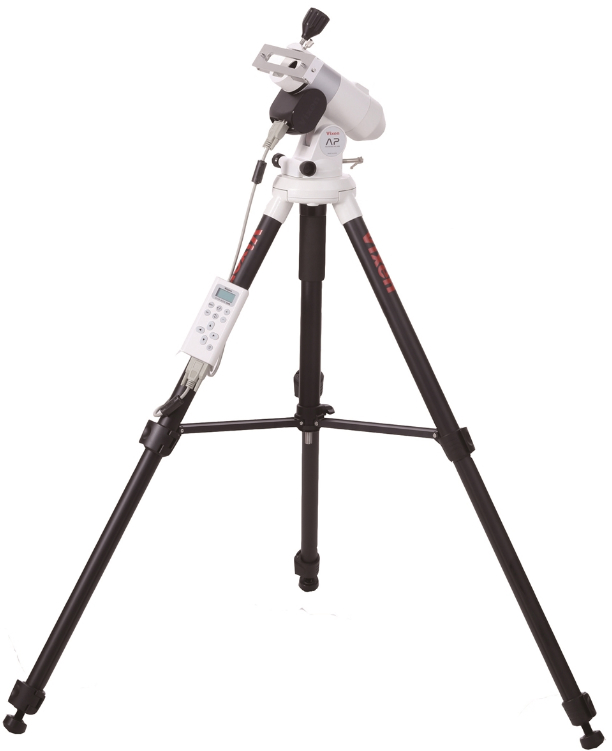 Editor’s Tip: To help facilitate long exposure astrophotography, we recommend using a photo guider for more accurate tracking. The Vixen Advanced Polaris (AP) Photo Guider is a lightweight star tracker that’s equipped with the Star Book One hand controller that gives you the ultimate in comfortable and precise operation. Using a moderate telephoto lens and the AP Photo Guider, you can snap images of Messier objects and other deep sky objects as well. Learn more about the AP Photo Guider by visiting MrStarGuy.com.

Timelapse Video of the Night Sky 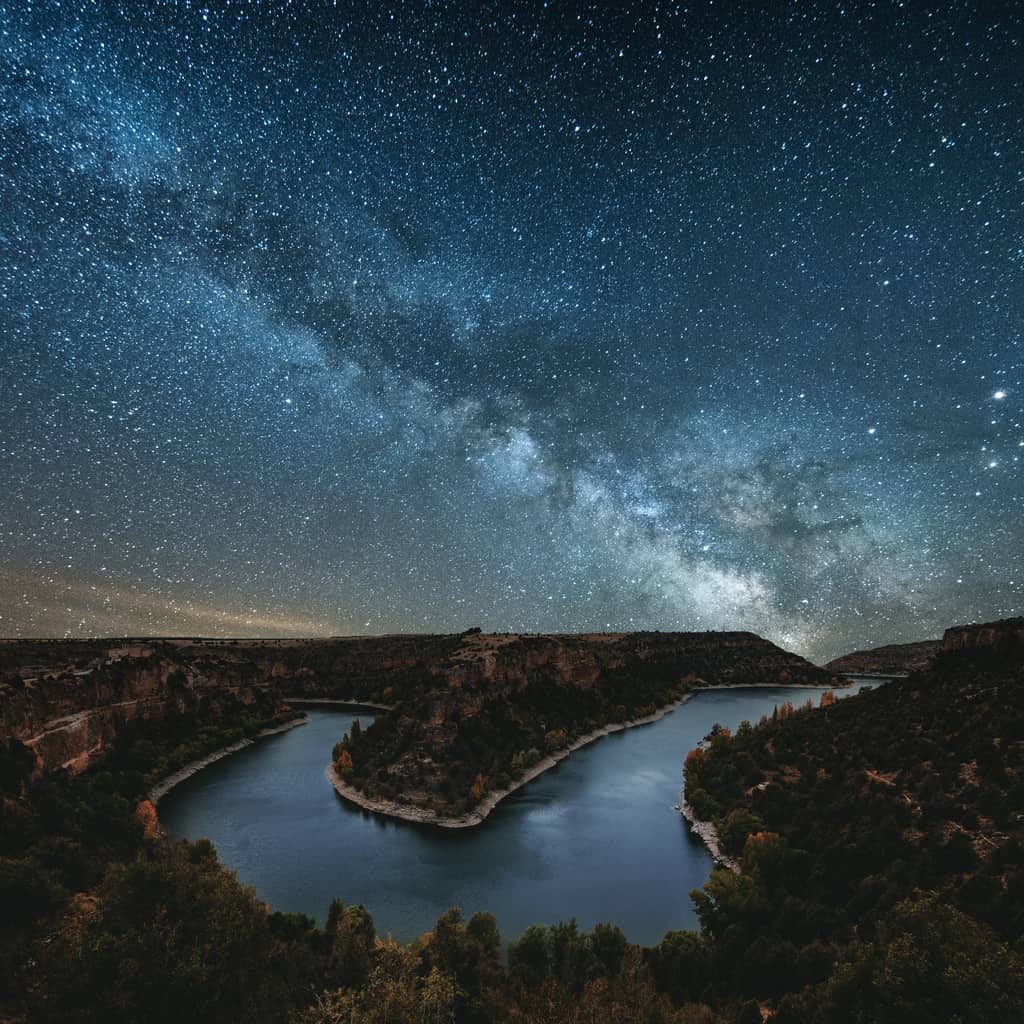 One of the great things about digital photography is that it allows you to not only shoot traditional still photos and long exposures of the night sky, but you can also make timelapse videos that show the passage of time.

Some cameras come with a built-in interval timer that controls the time between exposures as well as the total number of photos that are taken in a pre-determined period of time. If your camera doesn't have a built-in intervalometer, you can pick one up without spending a ton of money.

Either way, the settings you enter into the interval timer determines how smooth the timelapse video appears. Naturally, the shorter the interval between each image, the smoother the movement will be.

Once you have your series of images, you use post-processing software like Quicktime Pro to create a timelapse video that shows each of the individual images in motion.

To get started with a timelapse video, you need to dial in appropriate exposure settings by using your camera's manual mode.

A good place to start is with an aperture around f/5.6 if the moon is full or f/2.8 if it isn't. Take a test shot using a shutter speed of about 10 seconds. Use the camera's LCD to zoom in on the image, looking to see if there is appropriate detail in the stars and the foreground of the shot.

Adjust the aperture, shutter speed, and ISO as needed to get a good overall exposure, being wary of using a shutter speed longer than about 20 seconds. Otherwise, star trails will become evident.

Once you have a well-exposed test image, set the interval between each image (around 30 seconds is a good place to start) and the duration for the shoot using the interval timer.

When the camera is taking the images, be careful not to move the camera or change any camera settings as any such changes will be noticeable in the timelapse video. 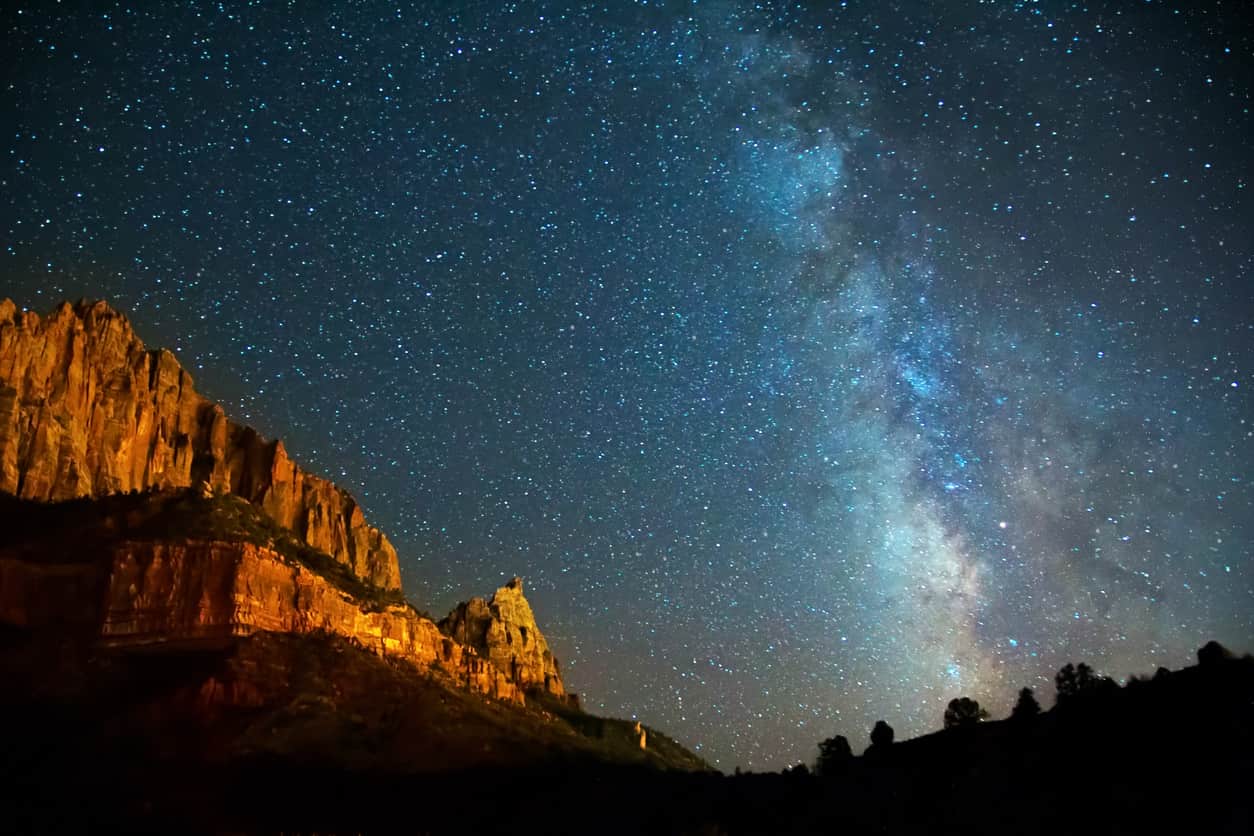 As I mentioned earlier, if there's interesting elements in the foreground of your photos or timelapses of the night sky, it's worth taking measures to ensure that the detail contained therein is visible in the shot.

Having interesting elements in the foreground helps give the image context, added visual depth, and also offers a nice contrast to the expanse of stars in the background of the image.

If the moon is out in full force, your lens will likely be able to collect enough light to capture the detail of the foreground elements.

But if there isn't much moonlight, you can light up the foreground using any number of techniques. 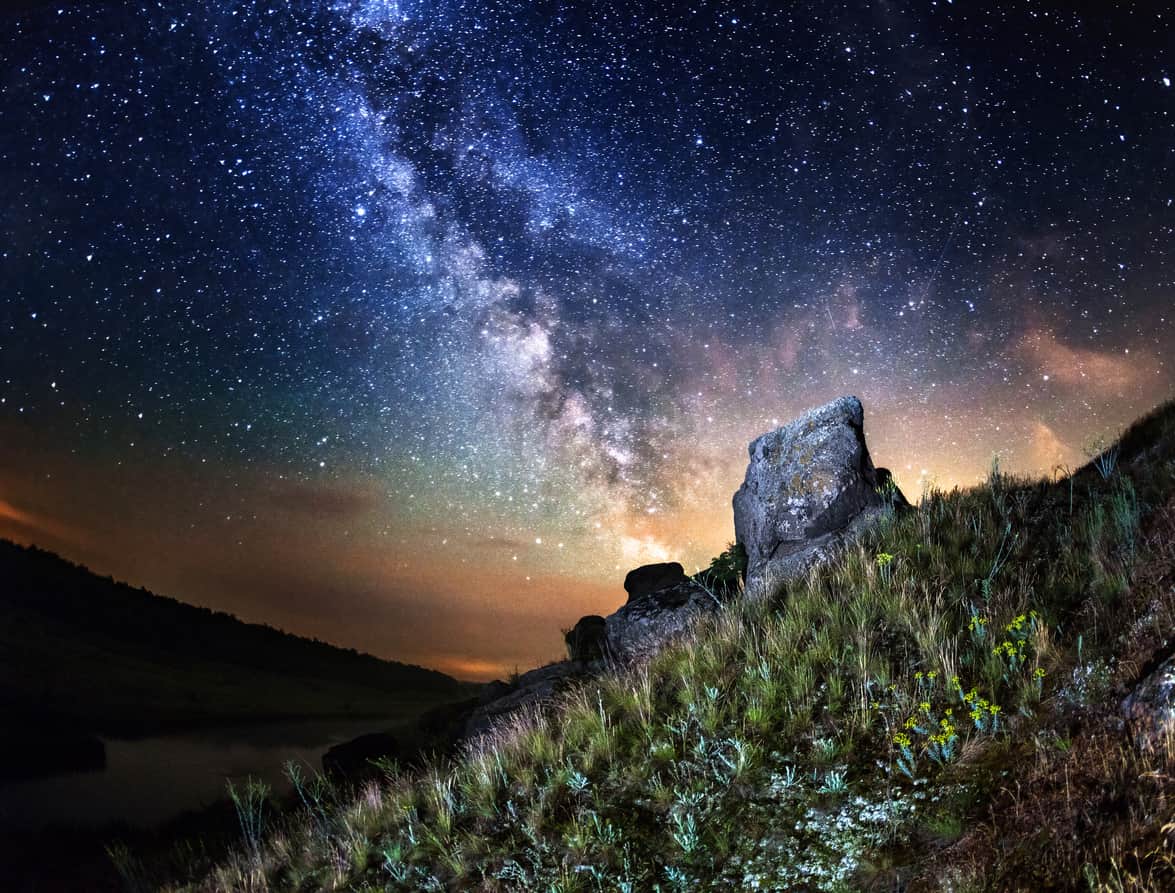 As noted earlier, you can paint with light by using a flashlight to illuminate foreground elements.

You can use a constant light source as well. Again, while the shutter is open, move the light around the scene for the duration of the exposure.

No matter what type of light source you use, be sure to keep it moving so the image doesn't have hot spots. 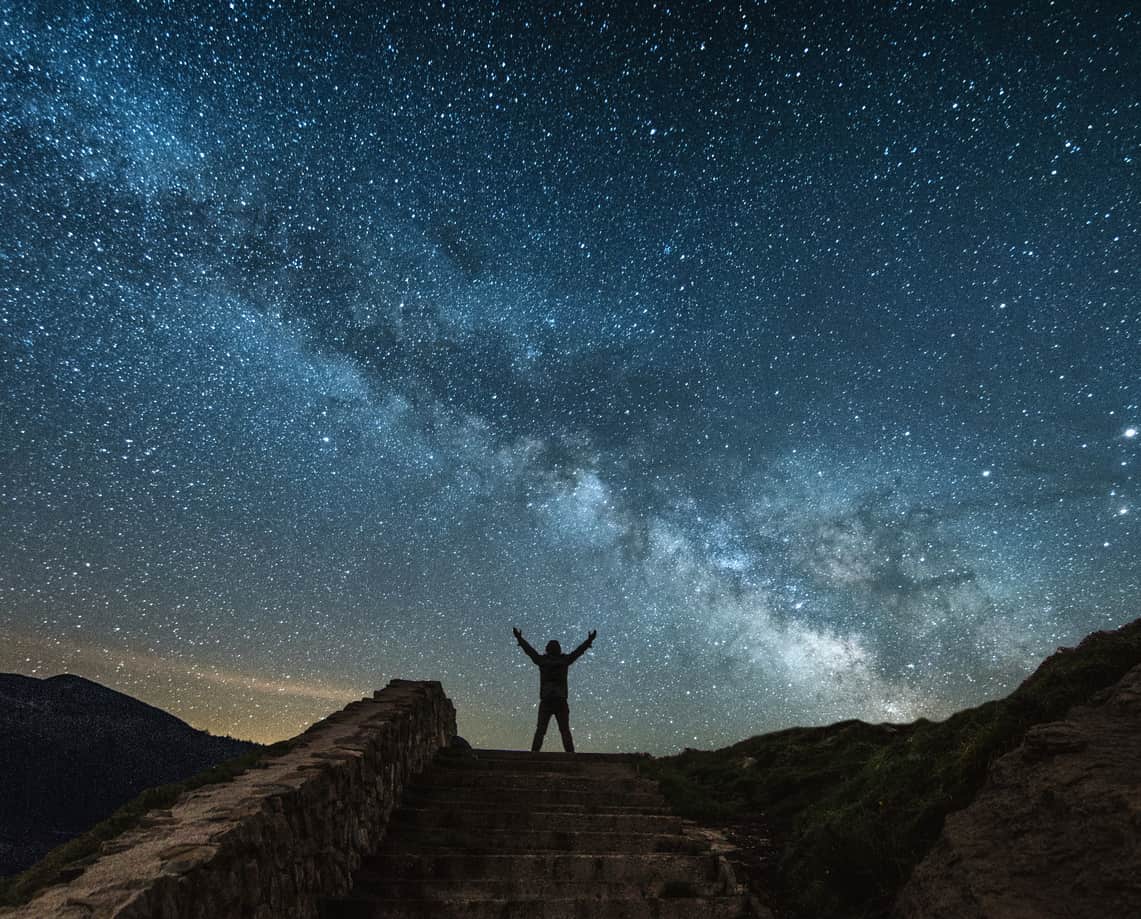 When you first venture into astrophotography, it can be a bit of a scary proposition.

However, if you dedicate yourself to learning a few fundamentals, outfit yourself with the right gear, and practice the art of night photography, before long, you'll have the knowledge and skills to create breathtaking images like those above.

To get outfitted with astrophotography gear, be sure to visit our partner, MrStarGuy, for excellent deals on everything binoculars, telescopes, mounts, tripods, and more.