How to Photograph the Milky Way (In Simple English) 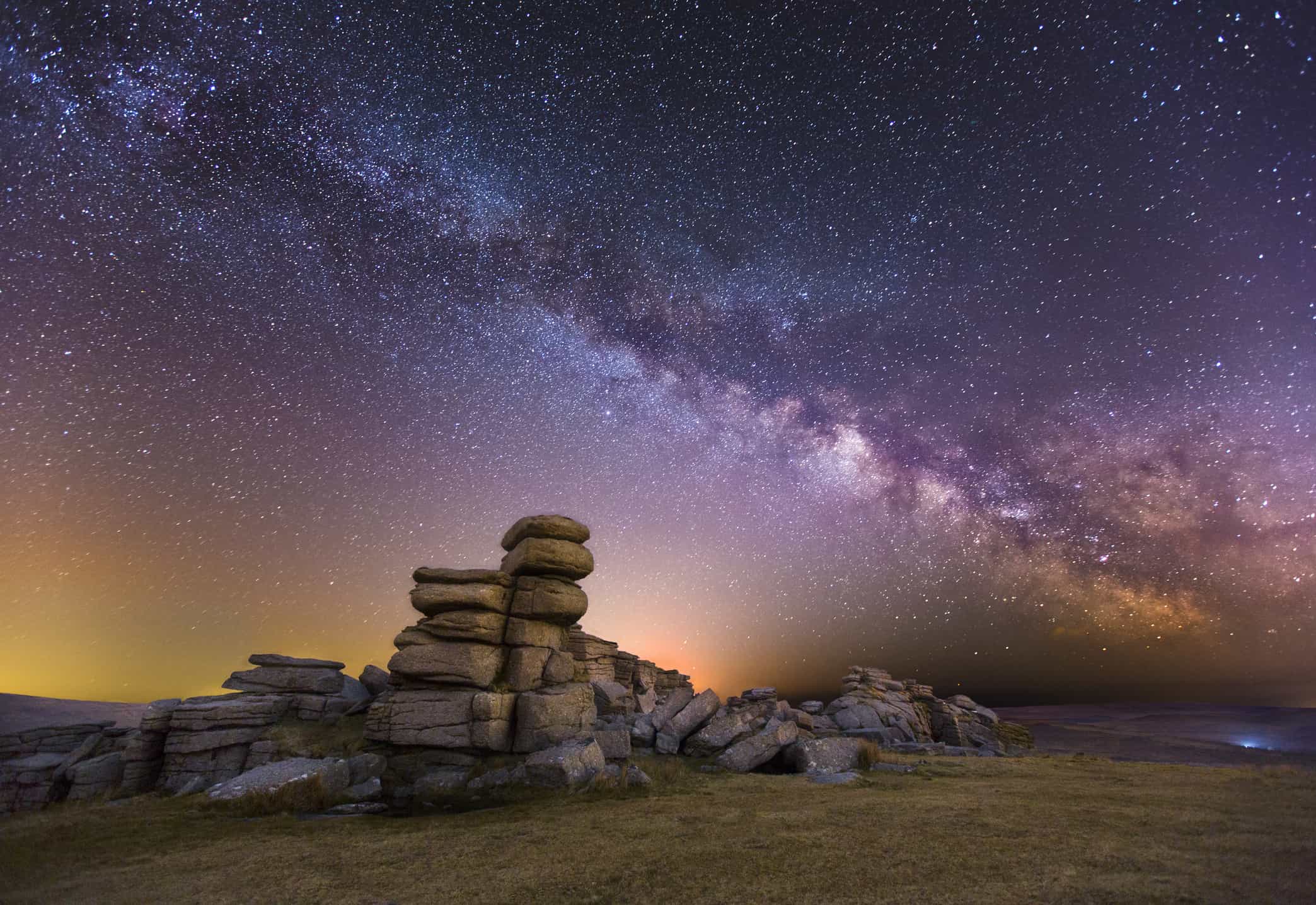 When most people see images like the one above, they likely think "gee, that looks hard to do."

And though it takes a good amount of planning and preparation, the right compositional choices, and the right gear, once you get the basic steps down, you might just be surprised at your ability to get breathtaking shots of the Milky Way.

In this tutorial, I offer up a step-by-step process for photographing the Milky Way.

Editor's Tip: To capture images of the night sky with ease, we suggest using the Vixen Polarie Star Tracker. This compact mount attaches to a standard tripod and can accept cameras that weigh up to seven pounds. You can orient the Polarie to face north using the included compass or by using a North Star Alignment window. You can use a polar scope for alignment as well. Once set, the Polarie tracks the motion of the stars which eliminates star trails. The result? Tack-sharp images of the night sky! Learn more about the Vixen Polarie Star Tracker at MrStarGuy.com. 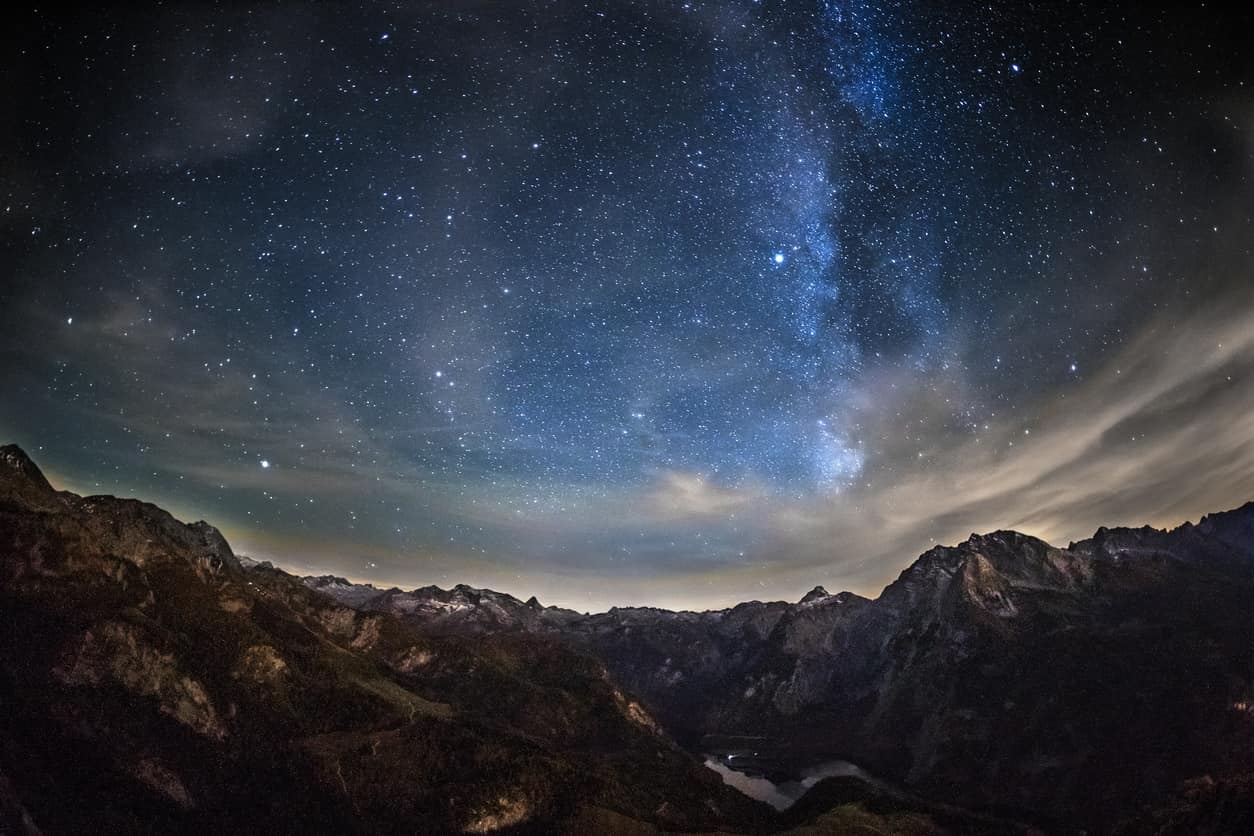 One of the factors to consider when photographing the Milky Way is the current lunar phase.

To get the clearest shots, you'll want minimal light pollution, so try to avoid shooting during a full moon.

Likewise, vantage points that are away from city light pollution will afford you the best chance of getting the clearest shots.

The Photographer's Ephemeris is a handy app for keeping tabs on the lunar cycle, and Dark Site Finder will help you find a nice, dark spot to set up your gear for your Milky Way photos. 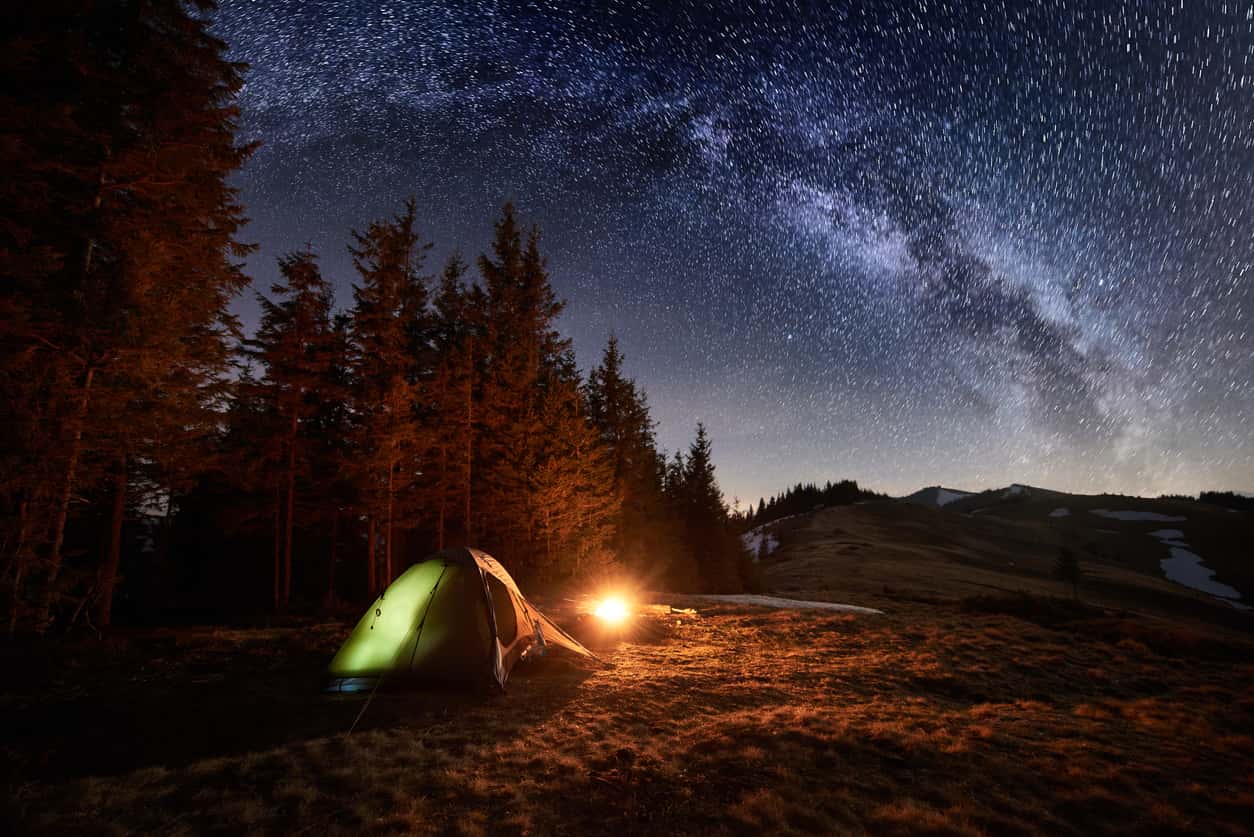 Now, this isn't to say that you absolutely must have completely dark skies to get pleasing shots of the Milky Way.

If there's distant light pollution from a city or town, don't worry about it! In fact, if you can see the Milky Way with your own two eyes, the chances are good that you can get a solid picture with your camera.

You'll also want to check the weather forecast as you plan your Milky Way photo shoot.

Naturally, you'll need clear skies to maximize your view of the Milky Way, but don't be scared off by a few clouds here and there. In fact, some stray clouds can add drama to the shot.

I use the National Weather Service's website to get up-to-the-minute and accurate forecasts for my area. 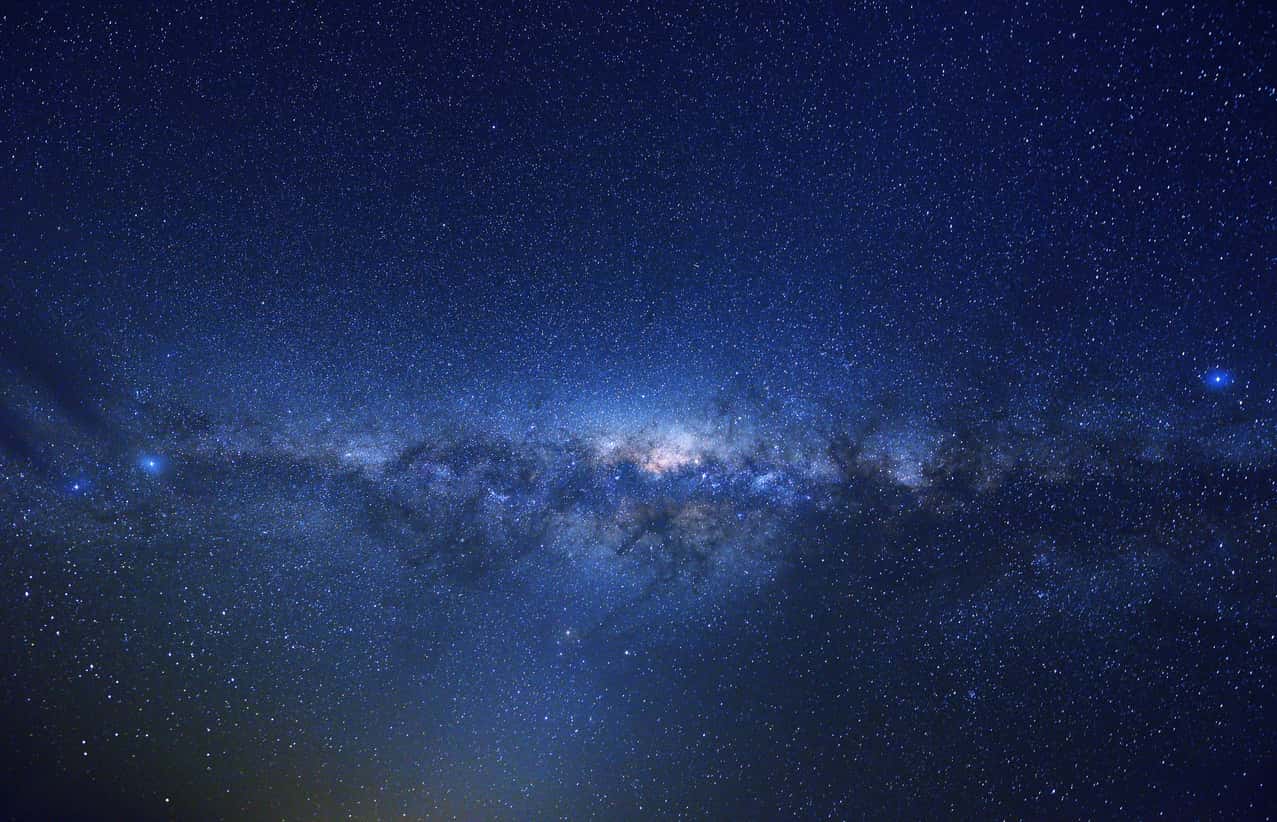 When you plan your Milky Way photo shoot, there's another factor to consider - the composition.

On the one hand, you can frame up a shot of nothing but the Milky Way, giving viewers an eyeful of the galaxy in a tightly framed shot.

As you can see in the image above, this type of Milky Way shot can be truly awe-inspiring.

On the other hand, you might also consider taking some shots in which you include some foreground interest from the landscape. 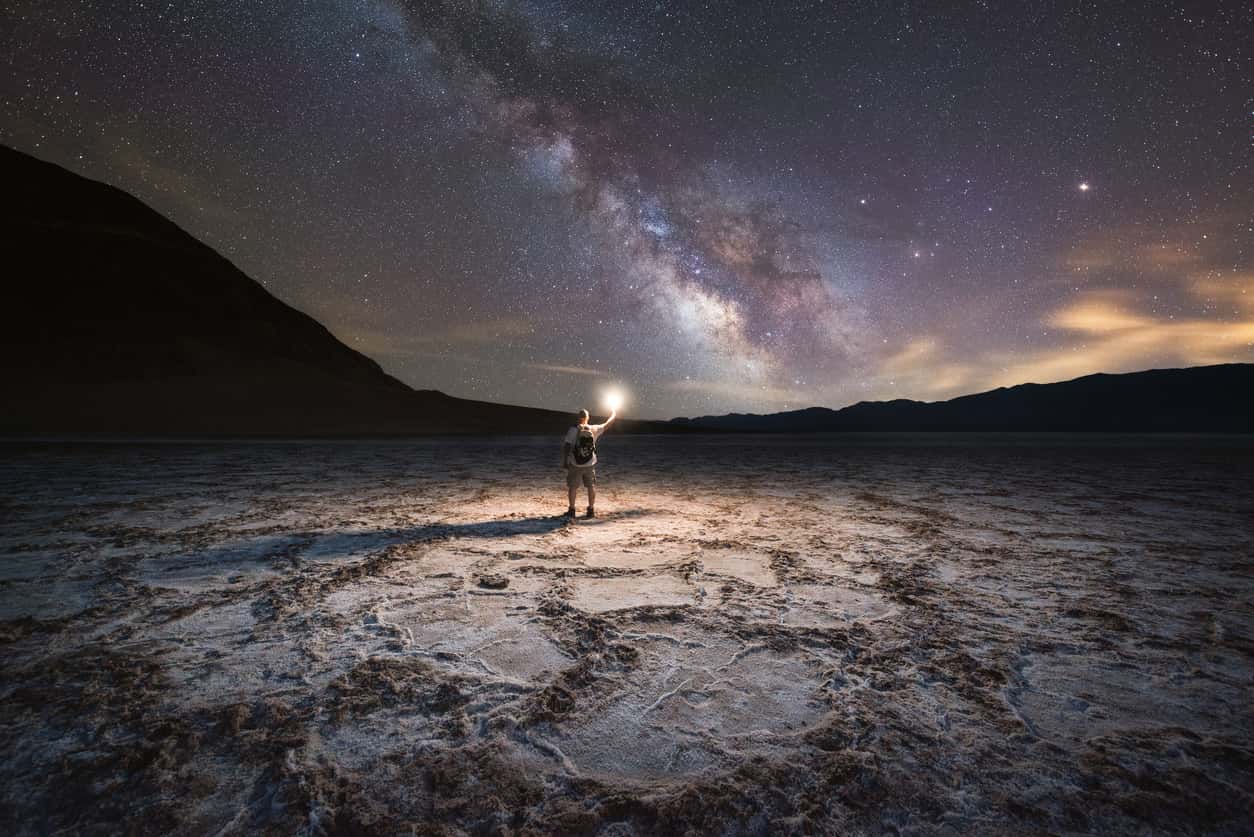 By adding foreground interest, you not only provide context to the shot, but you also provide a little bit of depth.

What's more, you can get a more dramatic shot by including foreground interest, particularly if you add a person to the frame, as seen above.

But don't just frame up the shot with foreground interest for the sake of doing it...

As with any photo, make sure that whatever is in the foreground - be that a person, a mountain peak, an interesting tree, or some other landscape feature - that it has a purpose, that it's balanced well with the Milky Way, and that it doesn't distract from the real focus of the shot, the sky above.

Step 3: Get the Gear 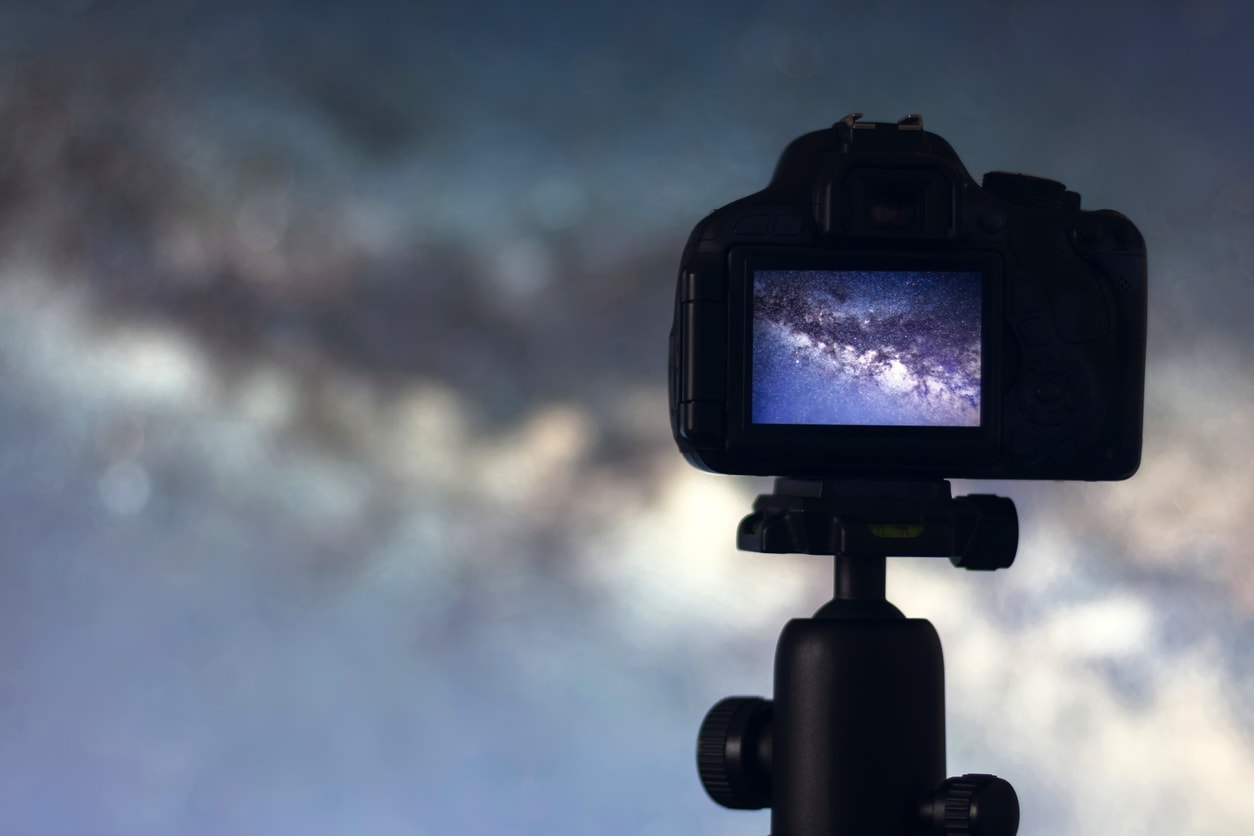 There are a few essentials you'll need for photos of the Milky Way.

First, you'll need a camera. Full frame cameras are most adept at nighttime photography because they have larger sensors and improved low-light shooting capabilities.

Models like the Nikon D850, the Canon 5DS, or the Sony A7S would be good choices.

However, all of those cameras are pricey, and not everyone has the budget to purchase one.

That being said, you can still capture nice images of the Milky Way with an APS-C or micro four-thirds camera.

What's essential, however, is that the camera has live view mode, manual exposure controls, a good ISO range (to at least ISO 3200), and the ability to change lenses. 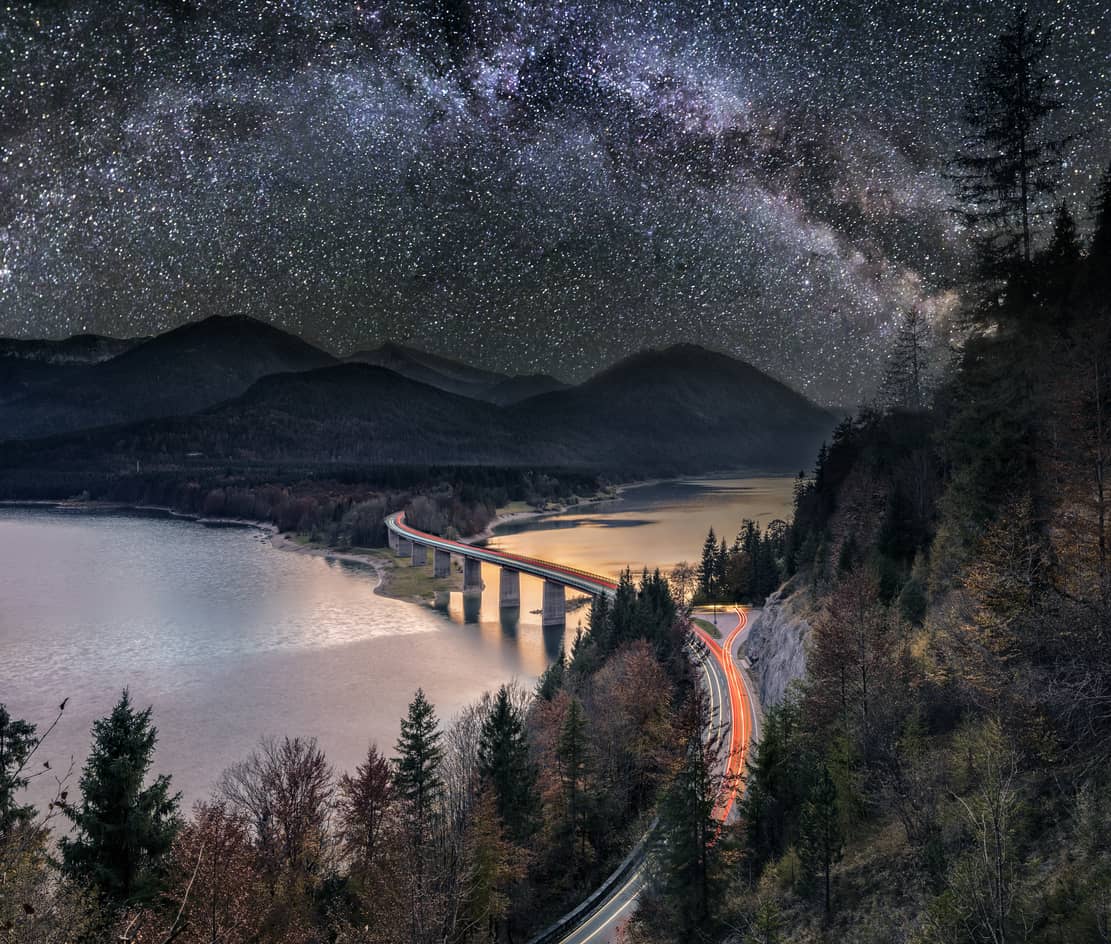 Speaking of lenses, the faster the lens, the better.

In this sense, faster refers to the size of the lens' maximum aperture - the larger the aperture, the more light the lens collects and the faster the shutter speed you can use.

The focal length of the lens is really a matter of personal preference.

If you want wide, sweeping shots of the Milky Way and foreground elements, a wide-angle lens would be best.

If you want more intimate shots like the one above, a normal lens or telephoto lens would be advisable.

Just be sure that whatever lens you use, that it has manual focus controls. You'll have to manually adjust the focus to get the clearest, sharpest photo.

Finally, as I noted in the introduction, having a star tracker mount like the Vixen Polarie shown above comes in handy for tracking the movement of the stars to eliminate star trails.

The Polarie is easy to set up and operates on two AA batteries. It's stepping motors offer incredibly accurate movement as well.

What's more, you can even get the Polaire bundled with a tripod, which is another essential piece of gear.

Having a longer tripod not only enhances the stability of your camera as it takes photos of the Milky Way, but that extra bit of height can afford you improved views as well.

And since your shutter speeds will be quite slow, having your camera on a tripod will only help you get the sharpest images possible.

Check out some examples of astrophotography taken with the help of the Vixen Polarie Star Tracker in the video above by MrStarGuy.

For more details about the Polarie and the Polarie with tripod bundle, check the Learn More links below. 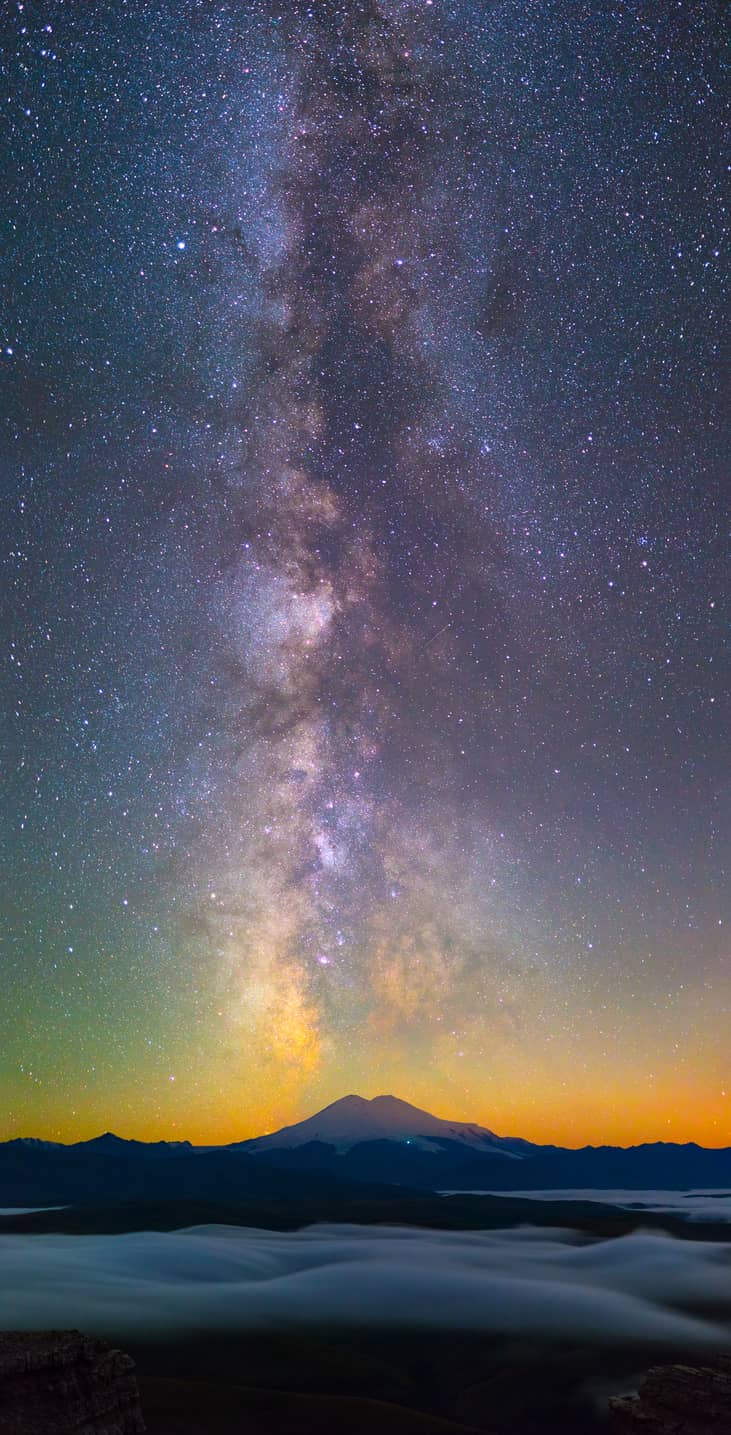 Now that you've gotten geared up and planned your shots of the Milky Way, now comes the time to execute the shot.

To begin, you'll need to turn your camera to Manual Mode (M), that way you have control over the camera's aperture, shutter speed, and ISO (you can also shoot in aperture priority, shutter priority, or program mode, should you desire). Set your aperture to the widest setting possible so you maximize its ability to collect light.

Also be sure your camera is set to record images in RAW format - not JPEG.

Set the focus to manual, crank up the ISO to 3200 or 6400 (at least to begin), and using live view (or the electronic viewfinder, if your camera is so equipped), set your focus on the Milky Way. 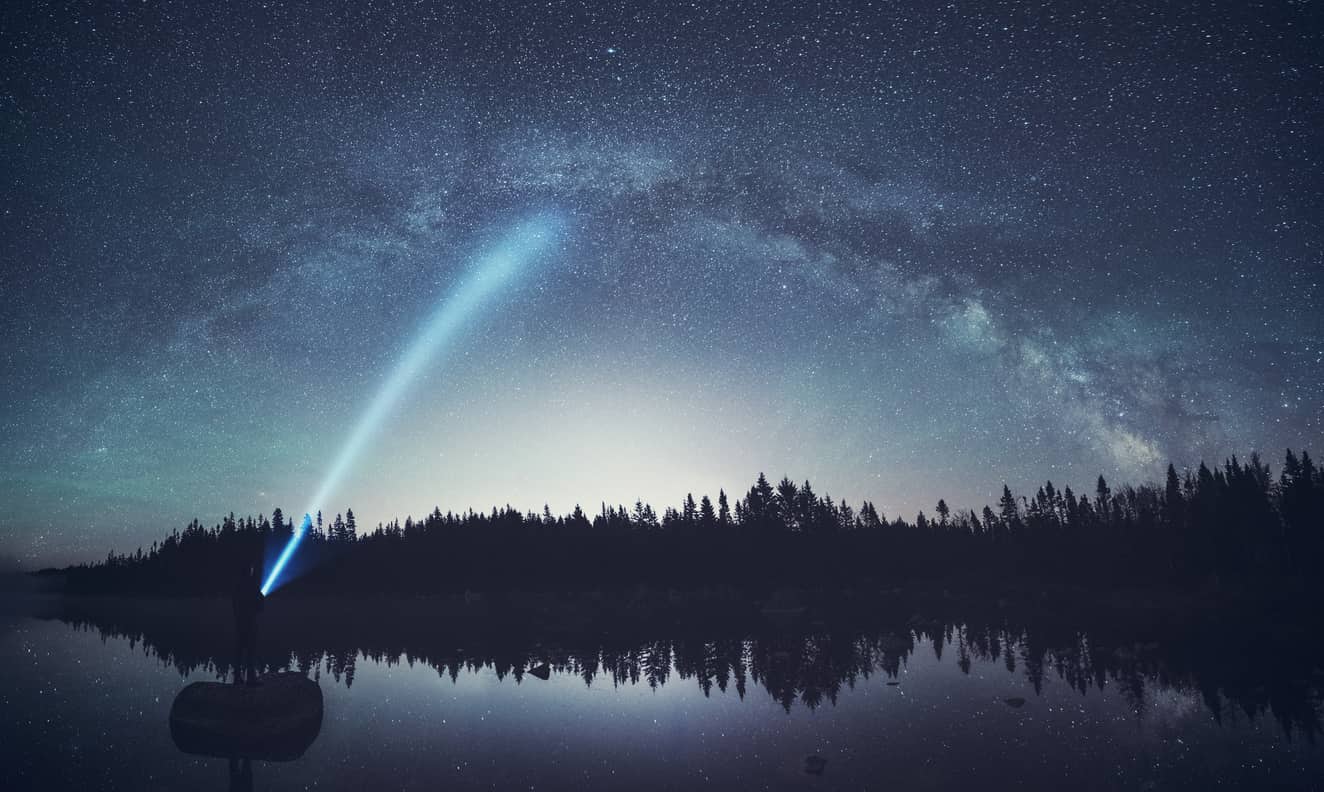 When setting your focus, choose a bright star in the Milky Way to serve as your focal point.

Using the zoom function on your LCD or viewfinder, magnify the image so you can see the star as large as possible. At that point, turn the focus ring on your lens until the star is tack-sharp.

Now that you've got the image focused, recompose the shot to include foreground elements as described earlier, if so desired.

Set your shutter speed to about 10 seconds and take a test shot. At this point, you're just trying to nail the composition, so don't worry too much about the exposure of the image.

Step 5: Finalize the Camera Settings and Take the Shot 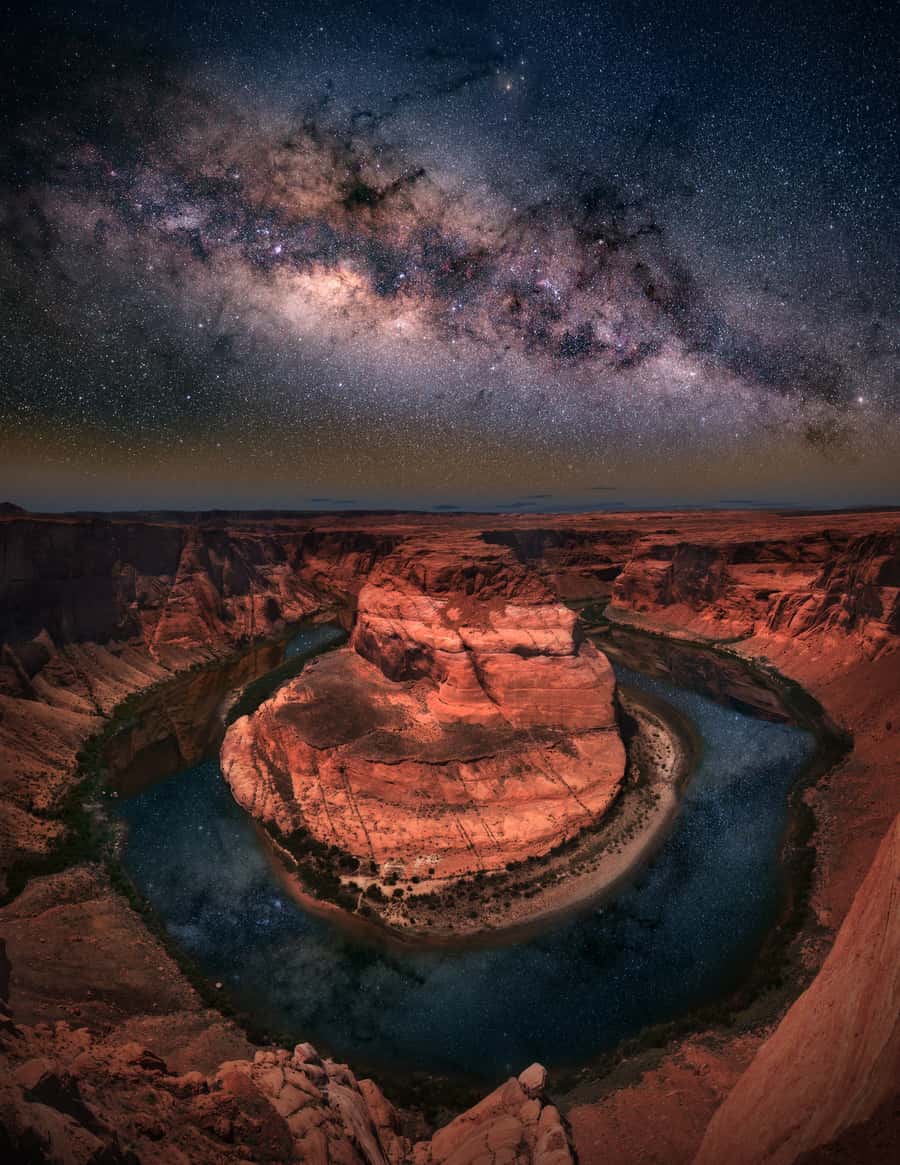 Once the composition of the shot is to your liking, revisit your ISO setting and lower it to about 1600. The goal here is to use the lowest ISO possible so you can minimize the presence of digital noise in the shot.

You'll need to experiment a little to get the ideal exposure. Just be sure you use your camera's LCD to zoom in on each shot to check it more closely for exposure and details. Continue to adjust as needed.

And with that, you have a step-by-step process to follow for taking tantalizing photos of the Milky Way!