How To Photography: Train your Eyes and Mind to See Basic Shapes First 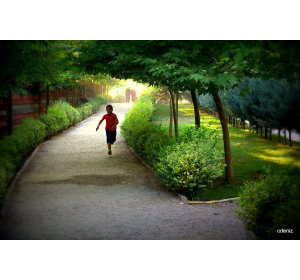 One of the fundamental skills that digital photography enthusiasts and amateurs often lack is a trained eye (and mind) that sees a potential composition at different levels. A major part of what makes a pro successful is having this skill. What the enthusiast or amateur’s eye/mind does first is to identify the objects, subjects and scenes he or she sees through the viewfinder. Humans have needed this skill to survive and thrive in both a prehistoric and contemporary world; and digital photographers must certainly recognize what they’ve captured in the frame.

The accomplished digital photographer doesn’t start at the level of identification, however. He or she tries to disregard the details of the objects and subjects and instead looks for the basic geometric shapes that define the primary subject matter, peripheral or distant objects and the “open” space between them.

The Rule of Thirds is one of the first compositional concepts many digital photography beginners and hobbyists learn. As beginners, they focus all their attention on placing the primary subject or object in the rule-of-thirds’ positions. With a bit of practice and study of photos, the enthusiast can obtain a deeper compositional understanding and use the Rule of Thirds more effectively. Instead of focusing on the positioned object, find the basic geometric shape that may be formed to the right or left of it. A tree in the right third of an image is also the right side of a horizontal or vertical rectangle that encompasses the space to the left of the tree.

In landscape photography, one of the critical compositional techniques is to include a smaller object in the foreground to create a balance with the grand sweep of landscape across the background. This object may suggest a circle that leads the eye to the landscape scene. Similarly, it may be an arch of a wind-blown sapling or a curved arm of driftwood on the beach. Often, the strongest element is not the object itself, but how its form reveals the geometry of the open space to its right or left.

Use a wide-angle lens for a landscape image and straight lines in nature begin to curve, which is a more pleasing guide for the viewer’s eye than the reality of straight lines. In the same way, diagonal lines become all or part of the outline of a triangle. Often, a foreground diagonal is positioned lower left to middle right. Then a distant diagonal becomes another side of a triangle, since it is positioned middle right to upper left.

Squares of different sizes, in the foreground and background, can become repetitive shapes within a composition. Your challenge is to position your camera such that you can create a balance with a series of squares. One may dominant, while smaller squares accent or support it.

Your photographer’s eye must also be developed to see three-dimensionally, with the spatial factor added to the compositional equation. You and your camera exist within the three-dimensional space of your image, not just the objects and scenes in front of you. Your spatial relationship to the elements you want to feature in your digital photos is critical. It takes practice and experimentation to determine the correct distance between you and a foreground object and its distance from the background.

An excellent exercise to help you recognize shapes and spatial relationships is to print a number of your photos or buy an issue of a photography publication. Study the images carefully and mark the basic geometric shapes and parallel and converging lines you find with different colored markers. Then, use these as practical guides when you are in the field with your camera.