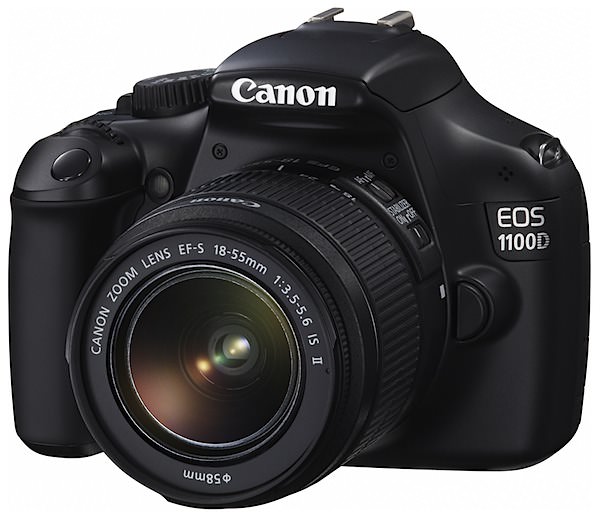 Digital photography is one of the great opportunities to experience excellence in your life, especially if you want to improve your picture-taking skills, and your results. The Canon EOS 1100D is a digital camera for the person who is ready to graduate from a compact, point-and-shoot to that first DSLR, without breaking the bank. Canon’s strategy is similar to Nikon’s. Its D3100 DSLR is aimed at the same market. For an average price of $600, the EOS 1100D can be your first step into the world of true DSLR photography.

In Your Hands
At this price point, the plastic exterior and stocky feel of the EOS 1100D is to be expected, but attach the 18–55mm ‘IS’ II zoom lens and it will feel substantial in your hands. Although the rubber coating on the grip is a bit thin, most people with large hands, will be able to grasp the grip comfortably.

Lens Upgrade
The zoom lens is an upgrade from the EOS 1100, the 1100D’s predecessor, and has built-in image stabilization (28.8 to 88mm 35mm equivalent). Although Canon doesn’t include sensor shift stabilization in their camera bodies, as Nikon does, the anti-shake feature on the 18–55mm IS II zoom lens is an advantage, especially for those photographers new to DSLR and with less experience shooting handheld, under low-light conditions or at the extreme focal length of the lens.

Large Controls
The hefty, bulky feel of the Canon EOS 1100D can also be found in the controls, which are large and easily accessible. You may have to spend a bit of time becoming familiar with the shooting mode dial, since it has 14 different options. Everything is there that you’ll ever need—program, aperture priority, shutter priority and manual modes for creativity; various subject-optimized shooting functions; and full auto and “creative” auto—but it’s all crammed on a small dial. Press the Q button on the back plate and quickly change from the standard default setting to vivid, soft, intense, warm, cool, brighter, darker or monochrome.

An Adequate Screen
The EOS 1100D’s LCD is fixed on the rear plate; and, at 2.7 inches, it is adequate for use with live view and doesn’t conflict with the optical viewfinder positioned above it. This Canon DSLR compares to the Nikon 3100D, since they both have just average resolution, with 230,000 dots. The viewfinder is one feature that is a bit above average for an introductory DSLR. Not only is it big and sharp, and provides 95% coverage, but also it shares the same 63-zone metering system that can be found on Canon’s semi-pro DSLR, the EOS 7D. Press the EOS 1100D’s shutter release partially and the appropriate number of the nine AF points will illuminate.

Plenty of Speed
The speed of various functions on the EOS 1100D is also a bit above average. The camera is at full power in just more than a second and is ready to shoot in another second. Memory is able to capture a full-resolution JPEG in approximately two seconds, an uncompressed Raw file in three. Although the EOS 1100D’s 12.2 megapixel APS-C-sized sensor is modest, it’s more than sufficient for entry-level DSLR photographers; plus, less pixels usually means less noise. The three frames per second for fast burst shooting and an ISO range of 100 to 6,400 are also standard features for this Canon.

Battery Power
The upside of the rechargeable lithium ion LP-E10 battery in the EOS 1100D is that you can take 700 pictures at full charge. This is three times of one of its competitors, Panasonic’s Lumix DMC-G3. The downside of the battery configuration is that it is placed inside the handgrip, where an open port for an SD memory card can also be found. You must remove the EOS 1100D from a tripod to access the inside of the grip and the port.

Read Part 2 of this PhotographyTalk.com article for details about the video capabilities of the Canon EOS 1100D DSLR camera.