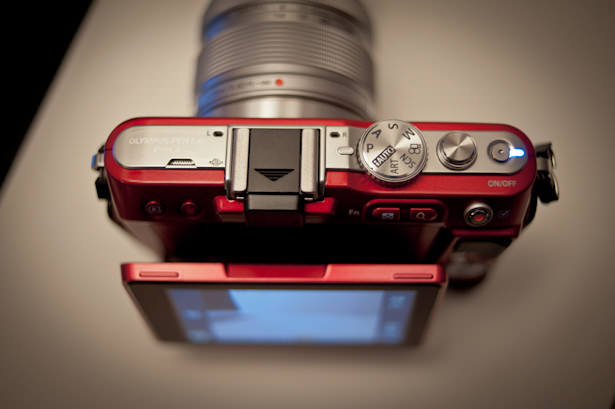 The Olympus PEN Lite E-PL3 camera is the company’s latest offering to hobbyists and enthusiasts who are ready to advance from a compact, or point-and-shoot, camera to their first camera with a large sensor. Historically, Olympus has brought many innovations to digital photography, such as the PEN series, with its lower-priced, simpler-to-use mirror-less interchangeable-lens models. If imitation is the highest form of flattery, then other camera manufacturers obviously think highly of Olympus, as they seem to adopt many of its technological advancements. The PEN Lite E-PL3 and its close cousin, the new PEN Mini, which is reviewed below, are Olympus’ attempts to retain its position as an innovator.

The Olympus E-P3 camera was introduced to the world with the PEN Lite. Both cameras share many similar features and functions, such as an advanced 12MP imaging sensor and dual-core TruePicVI processor. Where the PEN Lite first trumps its big brother is in styling. It looks more like the Olympus XZ-1 compact, which has been a big winner for the company. The PEN Lite has a slender profile, compared to the E-P3, with the removal of the built-in flash in exchange for an externally attached unit. Place both in front of you, however, and the PEN Lite has a bit more depth to accommodate the tilt/flip LCD screen.

In an interesting turnabout, Olympus has adopted another manufacturer’s ideas instead of seeing many of its ideas on other manufacturers’ cameras. The PEN Lite’s projecting lens mount looks very much like the Sony configuration on its NEX models. It’s also rare to see a camera of this kind with built-in stereo microphones, a standard feature on the bigger PEN models and one, thankfully, Olympus decided to keep on the PEN Lite.

Although the tilt and flip LCD screen is an excellent feature, its 16:9 aspect ratio is better suited for video than still photography, which is a native 4:3. This unfortunate flaw results in the loss of 25% of the screen area. A 4:3 portion of a 16:9 frame creates black bars on the vertical borders of your view. It’s simply not as easy to work with that significantly smaller preview.

As if Olympus wasn’t already targeting compact camera owners ready to upgrade with the PEN Lite, the company has also brought the PEN Mini E-PM1 camera to the marketplace. It looks and feels like the many compacts those beginners have been using, but includes many of the same features and capabilities of the PEN Lite. If a compact camera owner thought a PEN Lite was a bigger step then he or she was prepared to take, then the PEN Mini should be perfect. The PEN mini weighs almost two ounces less (50g) and doesn’t have the tilt/flip LCD screen and mode dial; otherwise, it’s the same big-sensor, interchangeable-lens camera as the PEN Lite.

As of the time of this review, Olympus had not yet announced a manufacturer’s suggested retail price; however, existing PEN models (E-PL1 and E-PL2) can be purchased in the $350 to $600 range.