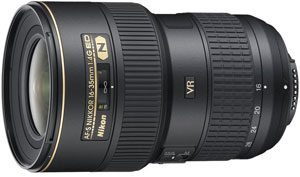 What distinguishes the Nikon AF-S Nikkor 16–35mm 1:4G ED VR zoom lens from all other ultra-wide-angle lenses is that it’s the first with optical image stabilization, Nikon’s Vibration Reduction (VR) technology. The Nikkor 16–35mm is fully compatible with both full-frame DSLR and DX-body cameras. At an estimated selling price (ESP) of $1,259.95, Nikon has positioned it to be a lower-cost option to the 17–35mm 1:2.8D or the 14–24mm 1:2.8G, for example.

It’s likely Nikon was also thinking of competing with the popular Canon's EF 17–40mm f/4 L USM zoom lens, which many photographers have purchased for its exceptional image quality as well as low price tag, compact size and light weight. Gaining that VR designation has made the Nikkor 16–35mm five inches longer than the Canon and weighing a pound and half more.

In another comparison, to the 16–35mm f/2.8 lenses from Canon and Sony, the Nikkor 16–35mm is also longer and just a bit heavier than the Canon.

The most obvious difference in the chart above is the absence of optical stabilization in the Canon and Sony lenses; although, they do gather twice as much light as the Nikon, as fast f/2.8 lenses. There’s always seems to be a trade-off. The primary upside of optical stabilization on the Nikon lens is that a photographer can hand hold his or her camera and produce sharp images four stops slower.

It’s understandable that some photographers may scratch their heads when they see optical stabilization on a wide-angle lens, since it is much more critical when using a long telephoto lens. It’s not just a frill, however. Photographers will have more shutter speed, aperture and ISO flexibility hand holding their cameras. Smaller apertures can be selected to widen the depth of field, longer shutter speeds are available to use motion blur creatively and it’s easier to work in extremely low light.

In total, image quality could be described as spectacular. The center of the frame is extremely sharp at virtually all settings. At 16mm or full frame, the farthest parts of the corners will exhibit some softness, but the sharpness returns at the typical apertures. Chromatic aberration is almost non-existent. The lens’s amazing rendition of fine detail is clearly evident in every portion of the frame, especially at 24mm and f/8 or f/11.

Photographers will be much less thrilled with the enormous barrel distortion of the Nikkor 16–35mm zoom lens, at 16mm and full frame. It’s simply more than it should be when compared to conventionally corrected SLR lenses and many Micro Four Thirds lenses. The distortion will be most noticeable in architectural and interior photos with many straight lines.

Overall, the Nikon AF-S Nikkor 16–35mm 1:4G ED VR zoom lens is an excellent choice. It’s provides outstanding value, with the addition of optical stabilization (VR II), and, for many photographers, will be a very practical lens for many types of photography (landscape, for example) and shooting situations. Its flaws don’t put it at the head of the class, but it passes most of the crucial tests and still graduates with flying colors.