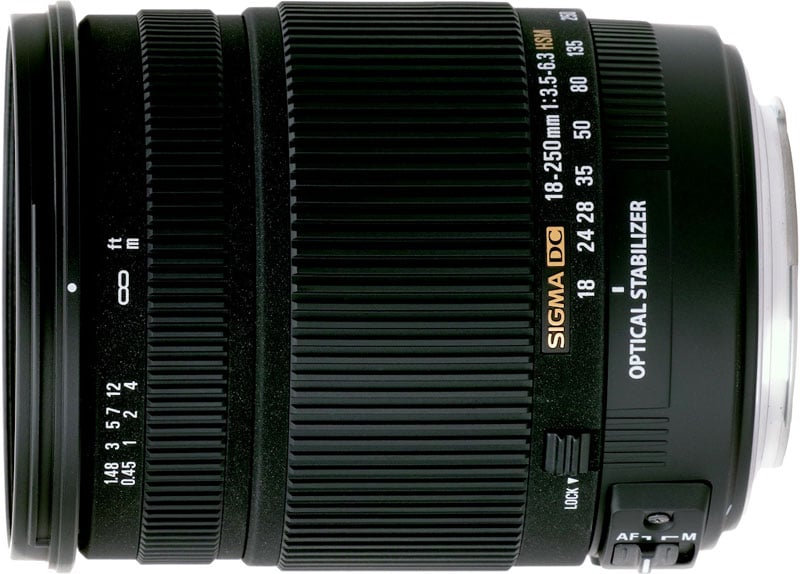 Sigma’s 18–250mm f/3.5–6.3 DC OS HSM zoom lens is clearly meant to go toe-to-toe with Tamron, its long-standing rival competitor. Sigma was also trying to enlarge its market share by designing this lens to be compatible with Pentax and Sony mounts, having been already accepted by Canon’s and Nikon’s. Sigma’s competitive strategy was that some lens buyers may prefer its in-lens Optical Stabilization (OS) technology to those other manufacturers’ camera-body systems. By extending the zoom range to 13.9x, Sigma has made significant improvements to this lens’ predecessor, the 18–200mm f/3.5–6.3 DC OS HSM. Sigma was able to do this and only increase the length and weight by barely-noticeable amounts.

Having added 50mm to the zoom range made it necessary for Sigma to redesign the optical configuration. Like the older 18–200mm zoom, the newer 18–250mm also has 18 glass elements; however, they are now in 14 groups. The real difference is a total of four Super-Low Dispersion (SLD) glass elements compared to only one in the 18–200mm zoom. Plus, three aspherical elements have been added to reduce distortion. Optical stabilization delivers as many as four advantageous stops and the OS automatically switches to single-axis operation when it senses the camera being panned, resulting in better capture of subjects and objects in motion.

Sigma has given the 18–250mm OS zoom lens the look and feel of most of the company’s above-average lenses: an appealing matte-black exterior and controls that work effortlessly. Although of a similar size than its rival, the Tamron's 18–270mm F3.5–6.3 VC, the Sigma lens obviously has more heft and weight in your hands. This can be attributed to the amount of metal in the barrel design, specifically the mount. The plastic parts of the barrel are made from a better grade, making them lightweight, but substantial. The zoom mechanism is a bit different, as the typical “double-trombone” zoom movement for the front of the lens is also employed internally at the back of the lens.

Sigma has obviously examined the competitors of its 18–250mm OS zoom lens, since it even re-designed the three lens switches to outperform Tamron, Canon and Nikon. All three switches are easily accessible with a simple extension of the right thumb. The location of the zoom-lock switch (on the top of the lens) is preferred to its position on the Tamron 18–270mm. The other switches, focus and image stabilization, are bigger than their Nikon and Canon counterparts, making the Sigma lens switches easier to control.

A lens of the size of the Sigma 18–250mm OS zoom is meant to be most compatible with larger DSLR camera bodies, such as Canon’s 7D or 50D. Smaller models (Canon 500D), however, will feel imbalanced, since the front of the lens will weigh much more than the body.

Combining such a large lens as the Sigma with a small DSLR can also cause a problem known as flash shadowing. A shadow is registered in the lower center of a photo because, at its wide-angle focal length, the lens will prevent some of the light from the built-in flash unit to enter the camera. Third-party testing seems to confirm the Sigma 18–250mm OS zoom lens produces very negligible flash shadowing until approximately 18mm wide and nearly minimum focus distances. Attach the lens hood, however, and the shadowing becomes very apparent. Testing also suggests that the smaller the DSLR on which the Sigma lens is attached, the more flash shadowing will probably occur. This is because the flash units on many entry-level DSLRs don’t extend far enough above the plane of the lens.

Although a minor victory in some eyes, the Sigma 18–250mm OS zoom lens exhibits very little zoom creep. This often occurs while carrying a super-zoom lens nose to the ground. The front of the lens is so heavy (with its large glass elements) that gravity takes effect and causes the lens to extend. Super-zoom lenses will also creep when reduced to their shortest lengths and inverted, with the heavy end above. The other handling issue of many super-zoom lenses is when the operation of the zoom ring is irregular and sporadic. The Sigma glides through its range with very little effort, which is superior to the Tamron equivalent.