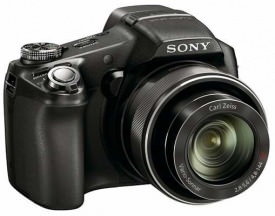 The compact design, 30x super-zoom lens, 16.2-megapixel sensor and full 1080p high-definition video make the Sony Cybershot DSC-HX100V camera an interesting option for both hobbyists and serious digital photographers. No one will be holding perfection in his or her hands, but the DSC-HX100V has significant features, functions and capabilities for a wide range of photographic uses. Part 1 of this PhotographyTalk.com article details the Sony model’s super-zoom lens and LCD screen and electronic viewfinder. Part 2 includes information about the camera’s external controls and various shooting modes.

The Sony DSC-HX100V packs many shooting modes into such a compact design. Its intelligent auto-scene recognition mode compares very favorably to similar features in Panasonic and Canon compact models. Once a scene or subject is framed, the HX100V automatically determines which of 11 pre-optimized settings match it. Sony has pushed its little compact even further by adding a superior auto mode. Its sole purpose is to keep blur and noise to a minimum and maximize the dynamic range.

The face recognition and smile detection modes automate the HX100V's operations even more. These work as they do on most cameras: the shutter is released when the camera identifies either human faces or smiling faces. Face recognition mode reads light conditions and distance to subject, and then selects the correct focus, exposure and white balance. The technology will even notice if the subject is an adult or child. Smile detection mode is equally exacting, as it can recognize big, normal or slight smiles. Third-party testing does indicate, however, that using the combination of face and smile detection will not always produce the image the photographer might have expected, especially if there is plenty of contrast in the lighting.

It’s no surprise that the Sony DSC-HX100V super-zoom has the typical program mode, but it’s a bit of a revelation to find a complete manual mode, giving serious photographers the freedom to set aperture and shutter speed. The scale of those choices is also quite amazing: shutter speeds from 30 seconds to 1/4,000th of a second, and nine aperture settings. Less-experienced photographers can also use aperture-priority and shutter-priority modes that reside between program and manual mode in terms of the skills required. Serious photographers will consider a lack of support for the RAW file format as a limitation of the DSC-HX100V, possibly dropping it from consideration, as a worthy option to a DSLR.

The intelligent sweep panorama mode and 3D still image mode will also be of particular interest to many photographers. Intelligent sweep panorama mode comes with three choices: standard, wide and high-resolution; and high-resolution creates a panoramic photo of 42.9 megapixels, quite an achievement for such a small camera. According to Sony, the HX100V is one of three Cypershot models with the 3D still image mode; and the first model line with this capability. The camera records two consecutive images from slightly different angles, and then combines them to give the photo a three-dimensional quality.

Read Part 3 of this PhotographyTalk.com article for more of the many features and functions of the Sony Cybershot DSC-HX100V camera, including its video capabilities. (Coming Soon)