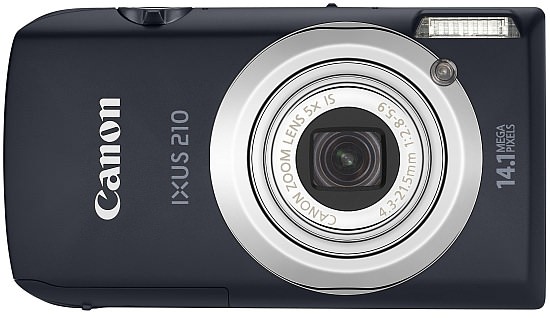 The Canon Digital IXUS 210 compact camera is one of the company’s PowerShot models (SD3500 IS). Of primary interest to that portion of camera buyers that may consider this camera are its large 3.5-inch, touch-sensitive LCD screen, which, among other functions, allows you to tap the sides of the camera to view your pictures, and the Hints & Tips guide for new photographers. After all, the IXUS 210 was designed for people who want more digital photography capabilities than the camera in a cell phone. From all indications, the IXUS 210 is that gentle step forward for this market.

Compactness and a stylish look are important criteria for potential buyers of the IXUS 210; so Canon gave the camera smooth lines, rounded corners and that pleasant feeling of a device totally encapsulated, with few if any interruptions to the surface. The only parts that protrude above the level plane of the exterior are the mirrored detailing that circles the lens, a window for the auto-focus (AF) assist/self-timer lamp at the top right of the lens and a very narrow window for the on-board flash at the far right edge of the faceplate. A flaw of this design is that your fingertips are likely to cover the on-board flash window if you hold the camera with both hands.

It’s obvious the Canon Digital IXUS 210 IS is compact, since it sits comfortably in the palm of the hand. Its weight of just a bit more than 4.5 ounces (130g) makes it light enough to be carried in a shirt or pants pocket or a small purse. Canon is known for its quality manufacturing, so it’s no surprise that the IXUS 210 IS looks, feels and functions like it was well built. It has just the right combination of metal body parts and plastic buttons, controls and port covers. Canon could have spent some more R&D to include a better method to grip this little camera. The only obvious aid is a raised vertical lip on the right of the camera back, where a thumb can find a reasonable hold.

The 3.5-inch, touch-sensitive LCD screen is certainly one of the most attracting features of the Canon Digital IXUS 210 IS. The screen is rendered in widescreen format, showing a preference for video recording over still images. To show the 4:3 format of those, the screen must cover the left and right sides of the view with black bars. Canon has also updated the resolution of the IXUS 210’s LCD screen to 460,000 dots, which was quite necessary, given the size of the display.

Since the screen is the entire back of the camera, there are no longer any rear controls, as there were on the earlier IXUS 200. Now, most of those controls are part of the touch-sensitive technology of the IXUS 210. The playback button still remains on the exterior of the camera, but now it’s on top of the body. Through the touch-screen, you can control the self-timer options, flash (auto, on, slow synchro, off, and activation of the automatic red eye reduction via the on-board menu folders), display info on or off, which includes, in playback mode, displaying capture details, such as date, time, resolution and a histogram. The trade-off is that touch screen controls allowed Canon to use a larger LCD screen, but that made selecting camera functions just a bit more complex and time-consuming.

Similar to the touch-sensitive screens of other cameras PhotographyTalk.com has reviewed (Panasonic DMC-GH2 and Panasonic Lumix DMC-FX700), you simply tap the screen of the IXUS 210 to select various settings, focus point, etc. For example, you choose a focus point by touching that spot. In playback mode, a quick touch will enlarge portions of a photo; rotate images; and protect, delete or add them to your “favorites.” As noted in those other camera reviews, controlling a camera with a touch screen requires practice and patience, at first. For beginners, especially those very familiar with cell phone operations, this feature of the IXUS 210’s LCD screen seems to be a user-friendly positive.

Read Part 2 of this PhotographyTalk.com article for more of the review of the Canon Digital IXUS 210 compact camera.(Coming Soon)