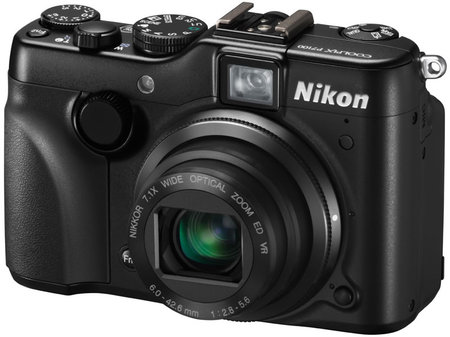 Late summer 2011 saw the release of six new Nikon Coolpix cameras, including the P7100, which is an obvious attempt to take advantage of the success of the earlier Coolpix P7000. As smart companies will do, Nikon listened to what P7000 users had to say about the deficiencies of that model, and then gave consumers what they wanted in the P7100. There was nothing wrong with the previous model’s image quality, but the slow speed that received so many comments was improved in the P7100 by adding an EXPEED C2 processor that is typically found in Nikon DSLRs. Other slow operational issues were addressed to create less shutter lag and faster power-on time and focusing. Read review of Nikon Coolpix P1000 done by PhotographyTalk.com.

The Coolpix P7100 targets digital photographers that want more than a compact, or point-and-shoot, camera, but not the size, weight and price of a true DSLR. Yet, it is a substantial piece of equipment in your hands; and a close inspection reveals its design and manufacturing integrity. That’s what the P7100 delivers: Clean, exterior lines and a lens and optical viewfinder that might suggest a basic camera, but the insides are packed with many of the features and capabilities of a DSLR. These include a 10.1-megapixel, 1/1.7-inch CCD sensor; the aforementioned EXPEED C2 processor; 7.1x (28–200mm) optical zoom through a NIKKOR ED lens; three-inch tilting screen; RAW shooting; twin control dials; and plenty of buttons to access the camera’s various functions.

Nikon’s design team was able to configure the dials and buttons, so they appear neat and tidy. The challenge for many photographers moving from a compact is that they will be confronted with all these controls. If they choose to make this transition, however, then they should be prepared for the necessary learning curve. The P7100 is a far-more serious camera than most compacts, so it simply needs more points of control because it functions more like a DSLR. Plus, photographers new to a DSLR-type camera will only become confused and frustrated if they must scroll through various menus to operate the camera. If buyers of this camera are initially overwhelmed, then they can switch to the auto mode. Eventually, however, they’ll shoot better pictures and enjoy the experience more when they learn how to use the dials and buttons.

Nikon also listened when P7000 users thought it wasn’t quite as comparable as the Canon G series, especially the screen. The Canon series is a more established line, but Nikon’s P7000 was its first dog in this fight; and it seems to be ready to continue the battle with the P7100. That’s why it sports a three-inch tilting screen that can be manipulated 90 degrees above the plane and 45 degrees below. Although it doesn’t turn 180 degrees for self-portraits, a face-detection self-timer is a very workable alternative. Another improvement evident in the P7100’s screen is that the image is easily seen even in bright light. Of course, the P7100’s optical viewfinder doesn’t compare to a full-fledged DSLR, but it still makes it more like a DSLR than a compact.

There have only been a few opportunities to test the Nikon Coolpix P7100, as it wasn’t yet released at the time of this review; however, those that have put it through its paces report the picture quality is well above average, digital noise is kept to a minimum with the larger sensor and it does operate faster than the P7000.

There is every reason to think that photographers familiar with DSLR features and capabilities will seriously consider buying this camera. Some of those advancing from a compact for the first time may find it’s too big of a bite all at once, including the projected price of approximately $500. This may be the Nikon Coolpix P7100’s biggest downside: It costs as much as many first-time DSLRs, but doesn’t quite match their functionality and quality. Some consumers may react negatively to being asked to spend DSLR-level money for a camera that has been designed and is being marketed as something a bit less.