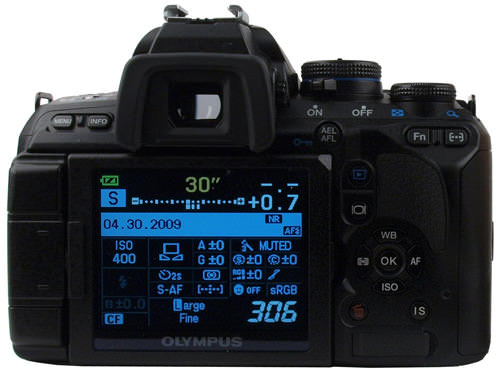 Digital photographers that are ready to move from the world of compact, or point-and-shoot, cameras to the much bigger world of DSLRs could make few better choices than the Olympus E-620. With features and capabilities that are significant improvements over the older E-520 and much closer to the more costly and robust E-30, the E-620, with the Olympus Zuiko Digital 14–42mm kit lens, is an excellent value at a price point of $550 or more, depending on the retailer. Part 1 of this PhotographyTalk.com articlepresents comparisons of the E-620 to the E-250 and E-30. Part 2 details more of the E-620’s functions and benefits.

The E-620's auto-focus (AF) system of seven AF points, with five as cross-type, includes a single-point or all-points selection mode. The system also has the flexibility for one point to be designated as a default setting, which can be accessed with a push of the Fn button. A flaw in the AF system that will bother many photographers is the delay that is caused when using the E-620’s contrast detection (Imager AF) in Live View mode. Third-party test photography would seem to confirm the accuracy of the AF. Shooting in low light does slow focus operations and the only meaningful solution is to ask the flash for AF support; however, the flash will strobe, which isn’t pleasant for human subjects.

Olympus has made many of its cameras very popular, especially with first-time DSLR users, with its array of “Art Filters.” These image-processing presets are also found in the E-30, E-P1 and E-450. They provide new photographers with the tools to the spread their wings, creatively. The various Art Filters are selected from the main mode dial and are complete, so Art Filters can’t be used in conjunction with other exposure modes. Even with that limitation, photographers will still have total control of ISO, white balance, exposure compensation and other settings. Only JPEG images accept the Art Filters’ effects, although RAW+JPEG mode is also compatible; however, whichever Art Filter is chosen doesn’t affect the RAW file. The Olympus E-620 shows a preview of the application when in Live View.

The E-620’s six Art Filters include Pop Art, Soft Focus, Pale & Light Color, Light Tone, Grainy Film and Pin Hole. Pop Art, Pale & Light Color and Light Tone only have an effect on the color and contrast of the image. The other three, Soft Focus, Pin Hole and Grainy Film, apply their effects at the pixel level, which causes a more vivid transformation. The downside for these three Art Filters is that they require five to 10 seconds to compete the effect, which renders the camera useless during this period of time.

Viewed as a whole, the Olympus E-620 is the equal of any DSLR with a sophisticated APS-C sensor and catering to the entry-level market. True, some of its competitors have a video capture feature, but not typically at the highest resolution. One doesn’t usually buy a camera at this price point to use it primarily as a digital video camera, which is why the E-620 scores so high as a digital still photography camera. Its built-in image stabilization is a more important capability than video, and most of the competition doesn’t offer IS.

Image quality is another test of a DSLR’s appeal and the E-620 produces excellent photos that are as good as those from any similar camera, when compared to as much as ISO 800. One troubling aspect of the camera’s image quality is that it also has the quite strong anti-aliasing filter found on other E-system cameras. These Olympus models, like the E-620, are limited in their capability to translate very fine detail, which is a definite competitive disadvantage. Despite these minor “flaws,” the Olympus E-620 will give the entry-level DSLR user all the sharpness, brightness and brilliantly stunning images they can imagine.

The Olympus E-620 is for the photographer who wants big features in a small package, and at an excellent price. It is, without a doubt, one of, if not the best, of the Four Thirds cameras.