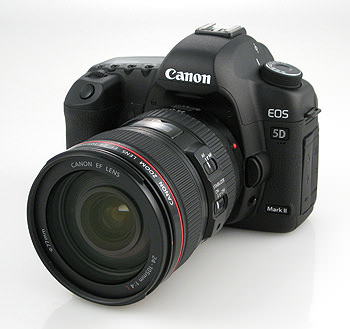 When Canon introduced the EOS 5D during August 2005, it was the first full-frame sensor camera with a compact body, meaning it was without an integral vertical grip. It has been popular with many digital photographers, especially those that already owned Canon lenses. The smaller EOS 5D was an alternative to the bigger EOS-1D body, and could accept all those previously owned lenses. Canon seemed to be pleased with the market position it established with the EOS 5D. Then, however, Nikon and Sony brought competing models to this niche, with the Nikon D700 and Sony DSLR-A900.

To maintain its market share, and even increase it if possible, Canon presented the EOS 5D Mark II. Not only would it please all Canon lovers, but also go head-to-head against Nikon and Sony. Photographers noticed quickly that Canon was pushing the standard forward, with a 21-megapixels sensor, 1080p video, 3.0" VGA LCD, Live View, higher capacity battery and many other features. Canon took the fight directly to Nikon and Sony by challenging the resolution of the D700 and offering more features than the DSLR-A900. A number of the features and capabilities of the Canon EOS 5D Mark II are detailed below.

21.1-megapixel, full-frame CMOS sensor: Canon gave the EOS 5D Mark II 8.3 megapixels more than the original 5D; and used what it learned from the sensor in the EOS-1Ds Mark III to produce a sensor that some think is better than the Mark III’s.

Read Part 2 of this PhotographyTalk.com article for more information about the Canon EOS 5D Mark II.