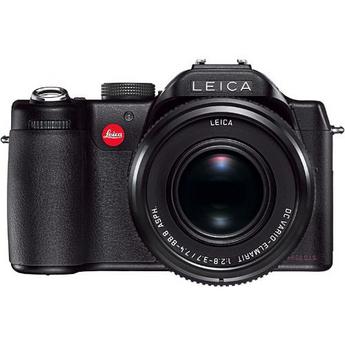 Although it may be statistically difficult to prove, it is likely that the universe of photographers who must have a camera with the Leica name on it is progressively becoming smaller. If you are one of them, then the Leica V-Lux 1 Camera may be an excellent choice, if its specs match your digital photographic needs. Everyone will see that you have a camera with the Leica brand on the exterior, but you may be happier that its internal mechanisms and technology mirrors those in the Panasonic's Lumix DMC-FZ50. This super-zoom offers a 12x optical, 35–420mm, f/2.8–f/3.7 zoom lens and a 10.1-megapixel CCD sensor. Plus, its designed to look and feel like a standard DSLR in your hands.

Because the Lumix DMC-FZ50 was originally designed as a bridge camera, or the intermediate step for compact users on their way to a true DSLR, it should be no surprise that the Leica V-Lux 1 is similarly packaged. If you’re a compact camera user motivated to move forward, then there should be no complaint about having to hold a larger camera body. It’s part of the learning experience. The bigger body typically translates into better image quality and that’s likely to be the primary reason, or at least one of them, that you should want to advance from a compact to a camera more like a DSLR.

The DSLR size of the V-Lux 1 made it possible to add a rotating, flip-out LCD screen, so you’re able to frame images from acute high and low angles. Although the screen’s diagonal measurement is only two inches, this is rather standard for flip-out screens on cameras at this price point. Another sign that this Leica model is a bridge, or transitional, camera is that it has the built-in, pop-up flash with which former compact users are familiar as well as a hotshoe, so owners can attach a separate, and more powerful, flash unit and broaden their lighting options.

Part of the Leica legend is that the company’s cameras have an electronic viewfinder (EVF), which may be another challenge for photographers moving from a compact camera. Of course, this feature is why many Leica lovers are attracted to the V-Lux 1; however, if you’ve never used an electronic viewfinder, then it may be a wise first step to rent an EVF camera for a weekend or, at the very least, spend some time with the Leica at a camera shop. The EVF in the V-Lux 1 is neither worse nor better than the competition, but you can see the last image in a series of pictures in continuous-shooting mode, which is typically not the case on some other EVFs. This isn’t much of a positive feature, however, if you want to be able to see a moving subject in real-time or reframe during the burst of shots.

What should attract most photographers’ attention to the Leica V-Lux 1 is its lens, a Leica DC Vario-Elmarit 12x optical, 35–420mm (35mm equivalent), f/2.8–f/3.7 zoom. This fast lens becomes an even better piece of equipment when paired with Panasonic's Mega OIS optical image stabilization. Photo sharpness is truly evident at the longest focal length with the stabilization feature. Barrel distortion virtually disappears from the middle point of the focal length range to the telephoto end, but some can be seen at the wide end. That is very good for a non-DSLR lens, however.

Leica has sweetened the deal with a number of subtle, but very useful, capabilities. With the flip animation mode, you can shoot as many as 100 320x240-pixel images, and then create a video segment of as much as 20 seconds with the individual images. ISO functionality on the V-Lux 1 camera is also outstanding. Select any shooting mode, and the highest ISO sensitivity is 1,600, which is significant. Then, use the high-sensitivity scene mode and the ISO sensitivity doubles to 3,200.

Video shooting with the Leica V-Lux 1 helps to justify its price, since the camera’s records at the resolution of 848x480 pixels, and not the abbreviated 640x480 pixels of the 4:3-video mode.

In terms of performance, the Leica's V-Lux 1 requires a bit more time than the Panasonic Lumix DMC-FZ50: 1.4 seconds from power on to recording the first image; 2.1 seconds between shots without the flash and 2.8 seconds with the flash; and a 5.4-second interval between shooting RAW images. This is actually a very acceptable lag for a camera that is not a DSLR. Image quality of the Leica is a bit better than its shadow, the Lumix DMC-FZ50 (or the Leica is the shadow of the Panasonic), as measured by JPEG compression. The V-Lux 1 images are totally clear of the jagged effect in some curved or diagonal lines, but this robs the images of some sharpness. Nonetheless, exposures are typically precise and there is plenty of color saturation.

Should you pay the approximately $150 more for the Leica V-Lux 1 than the Panasonic Lumix DMC-FZ50? For most camera consumers, the answer is probably “No.” The Leica does have a few extra touches that aren’t found on the Lumix, but you aren’t likely to miss them; and the important capabilities are identical on both cameras. Chances are if you buy the Leica, then its because you want a camera with that nameplate on it. It will certainly hold its value, but you’re paying a bit more for all its valuable features and capabilities than is necessary.

How to Get Feedback From Clients the Easy Way

Feb 18, 2021
4 Reasons Why Good Real Estate Photography is Worth It

Use these architectural photography tips to learn what gear you need, composition tips for improved images, and much more.

This list of the best monitors of 2021 includes professional options, budget-friendly monitors, portable monitors and much more!