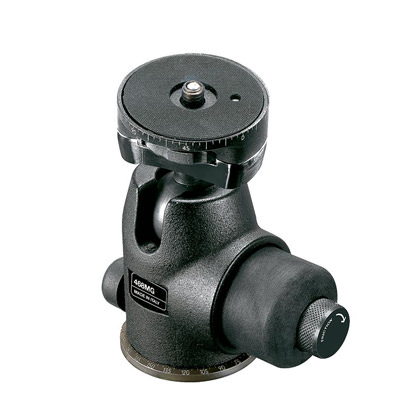 When you’re interest in digital photography advances to a more serious level, as indicated by the higher quality DSLR camera and lenses you’re using, the rest of your equipment must be equally serious. For example, it’s time to exchange that beginner’s tripod for a pro’s; and one of the first differences you’ll notice is that, in most cases, you’ll have to purchase a separate tripod and head. If you attach a large zoom or telephoto lens to your DSLR, you might be tempted to select the “default” choice of a three-axis pan-and-tilt head. This type has certainly proven its worth; however, it is not always easy to adjust, especially if you ask it to pan and tilt, simultaneously. A better choice for the most flexible and versatile uses is a heavy-duty, ball-and-socket head, such as the Manfrotto 468MG Hydrostatic Ball Head.

The Manfrotto reputation is well established; and the 468MG doesn’t falter in delivering superior performance. The 468MG is built with a strong, but light, magnesium alloy, and a large Teflon-coated aluminum ball. This powerful design and construction will handle as much as 35 lbs., which far exceeds the combined weight of large DSLRs or medium-format cameras paired with very large telephoto lenses. For example, the Canon EOS 1D Mark IV camera and the EF 800mm f/5.6 L IS USM lens, together, weigh only a bit less than 13 lbs. To support that weight and much more, the 468MG has an imposing head of 5.3 inches (13.5cm) vertical dimension and weighs 1.4 lbs. (650g). At this size, the 468MG is not meant to be hauled long distances and is best used with large tripods.

The quality of the camera mounting plate also distinguishes the Manfrotto 468MG Hydrostatic Ball Head from its competition. The plate’s disk shape is 2.5 inches (6.5cm) in diameter and comes with an ingeniously designed rubber insert to hold the bottom of your camera with great strength. Of particular note is the mounting plate’s spring-loaded retractable outer thread ring, which makes the plate compatible with the standard 1/4-inch tripod bush thread found on most DSLRs or the 3/8-inch thread of large format or video cameras. Any of the four Manfrotto Rapid Connect quick-release mounting plates can also be used with the 468MG.

In terms of control, the 468MG features two narrow openings, so you can tilt your camera as much as 90 degrees in either direction. Activate the locking level and the entire head turns on its base, creating a smooth pan of a complete 360 degrees. The heart of the 468MG’s maneuverability is the knob device on the side. It locks or frees the movement of the ball. There is very little play in the knob, so it only requires a quarter turn to switch from the lock to release position to make quick adjustments. Use the friction control at the center of the knob to regulate the ball’s ease of movement.

This extremely accurate hydraulic fine-tuning is the primary capability of the 468MG. Once you position the head like you want it with the friction control, the mechanism because so strong and immoveable that bumping against the head or any other inadvertent contact will keep it locked in place.

Manfrotto has developed another outstanding piece of photography equipment with the 468MG Hydrostatic Ball Head. If you’re a professional of any stripe or a wildlife, sports or action photography enthusiast, then the 468MG deserves your serious consideration, even if you haven’t been a fan of ball heads. This one has too many superior features to be overlooked, from ultra-rugged construction to extreme weight support specs to the incredibly smooth and accurate operation with the hydraulic friction control. Of course, you must pay for all of these excellent capabilities, as the 468MG is $200 plus, depending where you buy it. It’s a worthwhile investment, however, if your photography pursuits will benefit from adding the Manfrotto 468MG Hydrostatic Ball Head to your gear.