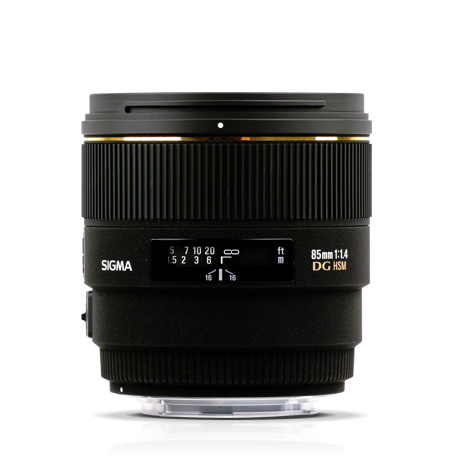 The short answers to this question are “Yes” and “No.”

Read what owners of the Sigma 85mm f/1.4 EX DG HSM have to say about the lens HERE.

The “No” answer refers specifically to the focus accuracy problem that some photographers have reported (more on this below).

Although 85mm is at the bottom end of the typical portrait focal range of 85mm to 135mm, the Sigma 85mm f/1.4, with its 136mm angle of view equivalent, is right where a portrait photographer would want a lens when using an APS-C 1.5x or 1.6x body.

If any type of portrait photography is your gig, then the Sigma lens will produce the results that generate the cash. Whether you prefer traditional studio work, on-location at weddings or casual portraiture, the combination of the Sigma’s focal length and wide aperture will deliver the goods in low light, so you don’t have to pump the ISO sensitivity higher. Subjects will look natural and have plenty of three-dimensionality, with no flattening from a distance or distortion from a closer camera position.

The quite shallow depth of field and above-average bokeh make subjects appear to be stepping from the flat image.

The Sigma 85mm f/1.4 is more than a portrait lens, given its superb image quality. It’s also a money lens for photographers shooting landscape, architecture and medium to large products, and also just the right general-purpose lens for the hobbyist.

The image quality of the Sigma 85mm f/1.4 is so good that its results will add to your reputation as an excellent photographer. That starts with sharp center reproduction at f/1.4, which then softens ever so slightly in the full-frame corners. As with many lenses of this type, as soon as you move from the widest end of the aperture range, the center sharpness, corner contrast and vignetting all improve significantly. At f/4 and smaller, the image quality is magnificent.

Other standard issues, such as chromatic aberration, distortion and flare, are difficult to find, with only the smallest amount of chromatic aberration in full-frame corners when the contrast is extreme, such as black on white. With 9 rounded aperture blades, this Sigma lens produces a very pleasing bokeh, or quality of the background blur.

What a number of photographers and reviewers have experienced with the Sigma 85mm f/1.4 is inconsistent focusing precision. There shouldn’t be any problem with the auto-focus system in the lens, as the Hypersonic Motor (HSM) is actually quieter and focuses faster than the much more expensive Canon EF 85mm. The Sigma lens also has other focusing features you’d expect: activated full-time manual focusing and front filter threads that do not turn.

Despite all these focusing capabilities, it appears you can’t be sure when the Sigma 85mm will focus properly and this is critical when you want to use its shallow depth of field to your advantage.

The Fork in the Road.

The good news is that the Sigma 85mm f/1.4 EX DG HSM lens delivers the amazing image quality (even with the focusing issue) that most photographers expect, even those that will make money with this lens.

The Sigma 85mm is also good news for the casual, non-pro, photographer, who will be using one of the best lenses, at this focal length, for the money.

If you’re a pro operating at the high end of the portrait business, then you could probably justify spending more than twice as much for the Canon EF 85mm f/1.2 L II USM. The great majority of pros and amateurs don’t have to make that choice because the Sigma 85mm is a money lens for their hard-earned money.