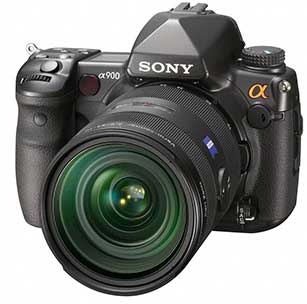 Upon close examination, it makes sense that Sony hesitates to describe its Alpha DSLR-A900 as a professional-grade camera. The primary reason is it doesn’t quite earn the higher grade of its true professional, full-frame competitors, the Nikon D700 and the Canon EOS 5D Mark II, although all three camera bodies are priced approximately the same ($2,700, body only). What confuses this picture is that the Alpha DSLR-A900 has the highest-resolution sensor of all three cameras: 24.6-MP, 35mm-format, full-frame CMOS sensor; but it requires a professional-level lens to benefit fully from the quality of the sensor. The combination of the Sony body and the appropriate lenses puts it at a price point that typically only professionals can afford, or justify, as a business investment. Sony A99 is a similar camera and is most liked by professional full frame photographers.

Although similar in design and size to the A700, the Alpha DSLR-A900 is, at just a bit more than two pounds, lighter than the Nikon D700 and about the same as the 5D Mark II. Some picture information, such as shutter, aperture, battery and remaining shots, can be viewed in a small display on the top of the camera; however, all information is displayed on the rear LCD. From there, you can find and select all your settings, although there is a learning curve if you are not familiar with this system. The three custom-setting slots on the mode dial does make controlling the camera easier and the three-inch LCD (921,000 pixels) does reveal very fine detail.

Sony has clearly distinguished the Alpha DSLR-A700 from its competitors, with in-body, sensor-shift image stabilization technology, known as "SteadyShot Inside," instead of Canon and Nikon’s in-the-lens image stabilization. The A900’s Intelligent Preview seems initially to be a plus. Selecting the depth-of-field preview button displays a preliminary image of

the scene on the LCD. This allows you to adjust exposure, white balance, shutter speed, aperture, etc., and see an almost-live preview of your modifications. The problem with this feature is that the image is not rendered as precisely as you might expect, limiting your adjustments to only the basic selections.

To market the A900 successfully, Sony has had to add various capabilities that the semi-pro or pro spending this kind of money would demand.

Creative Styles customizes contrast, saturation, sharpness, brightness and Zone, which maintains details in the highlights or shadows, according to the setting.
The D-Range Optimizer (DRO) broadens the dynamic range as well as exposure (+/- three stops at 1/3- or 2/3-stop increments) white balance and DRO bracketing.
A compressed RAW format that records 8-bit data rather than the typical 12-bit.
Auto-focus fine-tuning to address back- or front-focus issues.
Customization of various buttons and dials.

Sony has packed the Alpha DSLR-A900 with plenty of image processing, with two of the company’s proprietary Bionz processors. These drive the camera’s nearly five frames-per-second continuous-shooting capability and accelerate the registering of images at high-sensitivity ISO. Burst operation, however, is not as important as the speed of auto-focusing and single-image capture. Shutter lag is only average and somewhat unpredictable at 0.3 to 0.5 seconds, while the interval between shots is approximately 0.5 seconds. Auto-focus has the “slows” in low-light situations and with certain lenses, such as the 24–70mm f2.8 kit lens. In some tests, AF required approximately 1.2 seconds, which matches the specs of much lower-priced DSLRs.

There’s nothing unusual about cameras at this price point having some imperfections, but several of them on the A900 are true head-scratchers. The navigation joystick selects AF points, but it can’t be locked. This is of little concern if you select the Spot or Wide AF, but in local AF, the selected AF points can be accidentally altered. Much the same flaw is found with the Preview button, which can be moved with incidental contact. The camera’s mirror is also louder than most photographers would prefer.

Despite these challenges, the A900 records superb images, with highly acceptable noise levels and low color deviation. Taken as a whole, Sony should be applauded for its first foray into full-frame DSLRs, but the Alpha DSLR-A900 will require additional development to be comparable to the Nikon and Canon cameras at the same price point. These companies are not hesitant to describe their cameras as “professional,” and the professionals have proven that they deserve this status. It will be a few years yet, before professionals are willing to say the same about the A900.