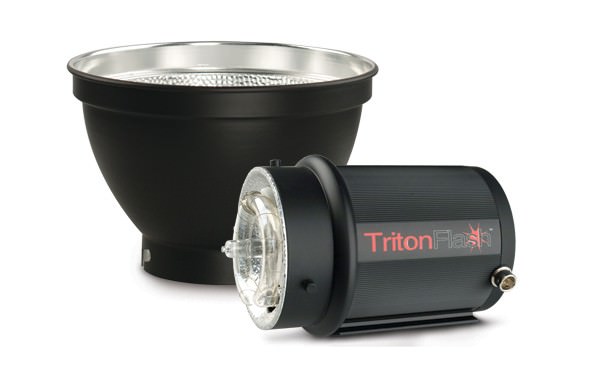 The challenge for many of today’s digital photographers is to have enough light to enhance outdoor portraits, nature scenes and other exterior environments. An on-camera flash is not sufficient if the goal is the equivalent of studio lighting; and tackling the problem from the other end of the spectrum by hauling cumbersome studio packages, even those built and marketed to be portable, just adds to the frustration. The solution is somewhere between those two extremes and Photoflex may have it in the TritonFlash. It may be approximately the same size as a Speedlite, but it packs a punch equal to a studio light, without the need of a heavy battery pack. Plus, the kit includes an extra battery and high quality softbox, and at a price lower than its primary competitor, the Elinchrom Quadra.

Without a doubt, the Photoflex TritonFlash’s primary benefit is how easy it is to

transport. Small and light, it truly allows you to take the studio into the field. Photoflex also concentrated on giving its customers as much value as possible, considering the TritonFlash costs twice as much as other lighting kits, such as the Phottix PPL-400, CononMark DL4 or Strobeam DL4.

Some of that value is found in its portability, but another significant portion is in the addition of a Photoflex track that has improved the head fastener, to which the all-metal swivel can be attached. Its twist-lock handle ensures a secure grip of large softboxes and umbrellas. Plus, the adjustable swivel mechanism allows users to balance the weight whenever large modifiers are used.

More value is returned in the form of identical output sockets on the power module, making room for duplicated heads that are capable of flashing at full power. The lower-cost competitors also have two outlets, but for different flash heads, one studio and the other a Speedlite-style, shoe-mounted flash. One of the few value negatives of the Photoflex TritonFlash is the lack of a case or handgrip, which are included in most of the less-expensive kits.

Third-party tests have been conducted to determine if the Photoflex TritonFlash battery can deliver the 750 full-power flashes the company claims. It passed the test; however, the unit did pause, after approximately 200 flashes, and a number of other times before providing all 750 firings. Part of the hesitations is due to the TritonFlash’s heat-protection circuit, which closes whenever the unit approaches overheating status.

Exposure, coverage and color balance performance were quite dependable at most power settings; although the temperature was a bit cooler at low power and full power didn’t quite achieve the guide number of 56 stated in the specifications. For best results, the tests concluded that you would want to use a flash meter or your camera’s capabilities to determine an exact exposure setting, so your images would not be underexposed.

The wisdom of spending approximately $1,500 for the Photoflex TritonFlash Battery-Powered Flash is primarily a function of the type of photography you shoot and how much of a studio-lighting effect you need at exterior locations. If you’re serious about the quality of images you want to capture and/or are a pro that needs a highly reliable, very portable lighting kit, then the Photoflex TritonFlash is an excellent buy. It gives you the versatility of two-head shooting in a small footprint with a heavy-duty tripod mount, which should satisfy the most hard-core pro.