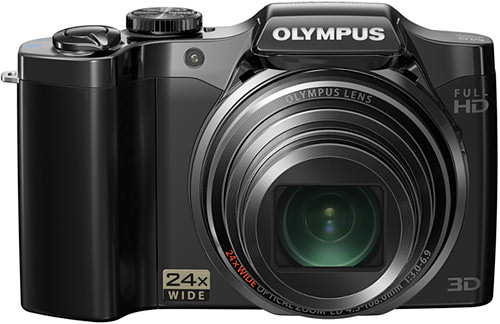 The digital photography marketplace is flooded with compact cameras sporting optical zoom lens of 30x, 35x, and even 36x, which would seem to make the Olympus SZ-30MR, at 24x, the odd-man out. It may not have the ultimate zoom power, but what first distinguishes it from these other cameras is that the Olympus SZ-30MR is the first camera of its kind that fits in a trouser pocket. In addition to designing so much zoom power into a pocket-sized camera, Olympus also included a 16-megapixel sensor, image stabilization, 1080p Full-HD movies with stereo sound, a 3-inch LCD screen and a multi-record (MR) mode, so two still images or two high-definition video segments can be captured simultaneously.

Unlike the Sony Cybershot DSC-HX100V compact camera, with its 30x zoom, the lens of the Olympus SZ-30MR retracts completely into the camera body, which makes it possible to carry it in a pocket. It only takes three seconds for the lens to reach its maximum length. The total focal length is 4.5–108mm or a 35mm equivalent of 25–600mm. At the wide view, the f/3.0 optimum aperture is relatively fast at this price point; however, the f/6.9 at 108mm is a bit slower than would have been preferred. Auto-focus mirrors these times, as it sets itself faster than might be expected at the wide end and measurably slower at the telephoto end. This actually negates most of the value of the AF Tracking option (which is a highlight according to Olympus) at telephoto focal lengths.

The mechanical image stabilization system in the Olympus SZ-30MR does aid in producing photos of very good image quality at slower shutter speeds, but it does have some limitations. You’ll discover that you’ll have to select a higher ISO when hand holding the camera, and racked to the extreme telephoto focal length, to avoid blurry pictures. The IS mechanism is also noisier than some comparable cameras, but the sound fades into the background upon further use.

Although a large, three-inch, 460,000-dot screen fills the back panel of the camera, its lack of sharpness is clearly evident as well as it being challenging to view the framed image in bright light.

Another disappointment is that you must crawl through a menu to control many of the camera’s function, especially those that are typically accessed often, such as exposure compensation or ISO sensitivity. Next to the rear screen, you’ll find only a one-touch movie record button; Playback, Menu and Help buttons; and a combination wheel controller/navigation pad with a centered OK button. The photographers most likely to buy the Olympus SZ-30MR would be happier spending less time in menus and accessing ISO through the Help button and turning the wheel controller to make exposure compensations.

The shooting mode dial on top of the camera does not offer a manual exposure mode or any semi-manual modes, such as aperture or shutter priority.

Despite the mode selection flaws mentioned above, the Olympus SZ-30MR does not lack for a number of interesting, even exciting, shooting modes.

What will capture the imagination of many photographers in the Olympus SZ-30MR is the Multi-Record mode. Two high-definition video segments can be recorded simultaneously, but from different angles. This gives you more editing options and a much more interesting video presentation. The MR mode is even more versatile, creating a still photo or video segment with normal settings and a second version with one of a number of Magic Filters selected. These include Pop Art, Pinhole, Fisheye, Soft Focus, Punk, Sparkle, Drawing and Watercolor.

At approximately $300, the Olympus SZ-30MR is one of many compact cameras competing for this part of the market, which are beginners or beginners wanting more features and functionality, but most of them automatic.