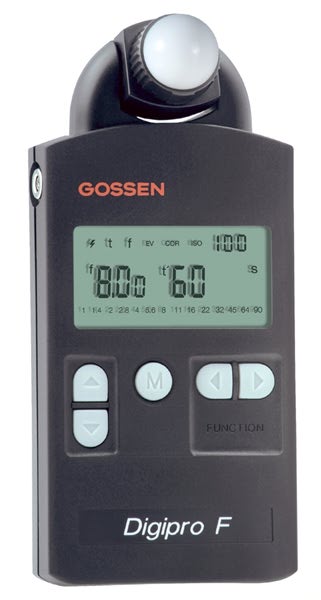 The Gossen Digipro F Light Meter is packed with the features and capabilities that serious enthusiasts and pros generally expect in a high quality meter. It reads incidental light, and then reflective light, when the integrated sphere is turned. The Digipro F has an aperture range of f/1–f/90, sync speed range of 1 sec–1/1000 sec and ISO range of 3.2–8,000. It also works for motion pictures by selecting the shutter speed option and setting it beyond 1/8000th of a second.

Read what owners are saying about their Gossen Digipro F Light Meter HERE..

The Digipro F is competitively priced at approximately $270, compared to the Aspen Polaris Digital at $170, which does have a bit better ISO and aperture range, but no rotating head for reflective light readings. The Sekonic L-308S ($230) features a similar aperture range as the Digipro F (f/1.4–f/90.9) and an identical ISO range; however, its flash sync speed is only half the Digipro’s, with a maximum parameter of 1/500th of a second. The Sekonic is also capable of both incident and reflected readings

The Digipro F appears to be constructed from a good grade of plastic that is easy to grip. An exceptional benefit is that the meter can be used both left- and right-handed, since the buttons are on the front. In comparison, the Sekonic L-308S favors left-handed operations. This is particularly evident because the ISO button must be completely pushed and held in that position, while the Gossen Digipro F’s ISO button remains activated once it is engaged, so selecting other settings is at your discretion.

In addition to ISO, shutter speed, aperture and flash are selected via left and right control of the function button, and then using the arrows to choose desired values. Press the M button to read the light, and then the Digipro F will trigger the flash when connected with a PC sync cable. Power comes from just one AA battery. Whenever you change the battery, the meter’s microprocessor gives the unit a complete diagnostic review to make sure it is in working order.

Third-party tests compared the exposures of shooting an object with tungsten light and a flash. Without the flash, the Digipro F determined the correct exposure better than the camera or a Sekonic Flashmate L308. The Digipro F called for a two-second exposure that resulted in a true white background. The Olympus camera used in the tests chose 1.3 seconds, the Sekonic just less than one second. Both the camera and Sekonic light meter gave the background a gray cast, which was obviously incorrect.

In the flash test, the camera’s reading of f/11 appeared to be more accurate than the Digipro’s f/16, a full stop difference. With the more detailed scrutiny of the histograms, however, both the Gossen and Sekonic meters were more on the mark than the camera, establishing once again the superiority of an incidental light meter in a studio setting.

With any photography equipment, the bottom-line question is always “Is it worth the money?” The answer for the Gossen Digipro F light meter is definitely “Yes.” Its flexible operation with both hands and the exceptional accuracy in third-party tests prove its value. It may cost a bit more than the competition, but the Gossen is highly dependable and will do the job in virtually any type of photographic situation.