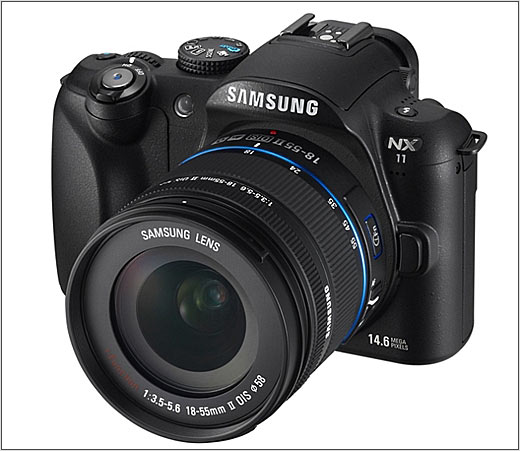 The market niche that sits between a typical, small compact digital camera and a true DSLR continues to be filled with many new models, such as the Samsung NX11. Their purpose is to help photographers who want to make the transition, but are not prepared to pay for a DSLR or the learning curve required. Samsung has clearly taken aim at its Micro Four Thirds competitors from Olympus and Panasonic, with this mirror-less NX11 model and its large sensor, electronic viewfinder, interchangeable lenses and various other features and capabilities. Although the NX11 is very much like the earlier Samsung NX10, it does offer a number of upgrades and, more importantly, a lower price, making the NX11 an excellent value for the money, which is approximately $600.

This added value comes in the form of an improved handgrip, new panoramic mode, additional 1:1 and 16:9 ratios and the i-Function feature, which was introduced on the NX100. For those photographers “graduating” from a simple point-and-shoot to the NX11, Samsung has also included an interesting i-Scene lens priority mode, which automatically selects scene options that match whichever lens is being used. Buyers of this camera will also benefit from its 14.6-megapixel, APS-C-sized, CMOS sensor, which is identical in size to sensors on introductory DSLRs and considerably bigger than the sensors on Micro Four Thirds cameras. The remainder of this review explores some of the highlighted features of the Samsung NX11.

Despite all of the bells and whistles on the Samsung NX11, potential owners have a fundamental choice to make: Do they still want a very lightweight and compact camera like the point-and-shoot they may own or do they want to experience the greater image quality of a true DSLR that the NX11’s APS-C sensor produces? This tradeoff is evident in the larger size and heaviness of the 18–55mm kit lens and also the 50–200mm, both of which cause the entire NX11 set-up to weigh more than comparable Micro Four Thirds body/lens combinations. You may not care, however, once you see the excellent images the 14.6-megapixel sensor delivers.

JPEGs exhibit no noise at ISO 100–400; ISO 800 is also quiet. Some noise appears at ISO 1,600, but you must use the highest setting of ISO 3,200 before the noise becomes noticeable. Shooting RAW files at the high end of the ISO range will produce more noise compared to JPEGs at the same levels.

To remain competitive with Panasonic (Lumix), Sony (T-series Cyber-shots) and Canon (Digital IXUS cameras), Samsung developed Smart Auto for the NX11, which is its take on the intelligent auto modes in these other cameras. The Smart Auto system comes with 16 of the typical combinations of exposure and other settings pre-programmed. When the scene or subject in the frame matches one of these automatic combinations, Smart Auto selects it. Similar systems are more complex, forcing the user to search through scene modes in a menu to find the right match, and then activate it. This makes the Samsung NX11 a very good choice for photographers that like the automatic functionality of a point-and-shoot, but want more camera.

Video specifications for the NX11 are high-resolution HD 720p 1280x720 movies in the 16:9 aspect ratio and standard VGA 640x480, or 320x260, movies in the 4:3 aspect ratio, and in the H.264 format at 30 frames per second. The small internal microphone only records a mono track. The camera does have an HDMI port, but a HDMI cable is not included in the kit, which was an obvious decision if Samsung was to keep the price low.

Although the Samsung NX11 hasn’t changed much from its predecessor, the NX10, many NX100 owners will likely be attracted to its DSLR look and other upgrades. The NX11 may cost a bit more than its comparable competitors, such as the Olympus E-PL2 and Panasonic Lumix DMC-GF2, but this new Samsung model may be a better entry point for the many beginners who want to advance at least a small step into a compact camera system. If that is you, then you should buy this camera.