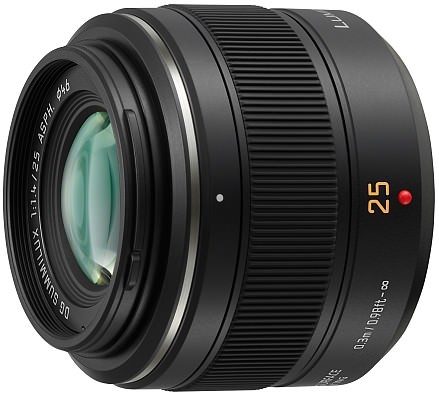 Owners (or buyers) of Micro Four Thirds camera systems have a new lens to consider from Panasonic, the Leica DG Summilux 25mm f/1.4 ASPH. One of the reasons it will deserve ample consideration is that it has the fastest maximum aperture of any Micro Four Thirds lens as well as a number of other qualities. In the Micro Four Thirds system, this 25mm lens is the equivalent of a 50mm in the 35mm format. The Leica DG Summilux 25mm f/1.4 contains nine elements arranged in seven groups, two of the nine are aspherical elements and one is an ultra-high-refractive-index lens element. A unique Nano Surface Coating has been applied to reduce ghosting and flare. The iris diaphragm consists of seven rounded aperture blades.

Physically, this Panasonic lens is quite small at just a bit more than two inches (54.5mm) in length and weighing only seven ounces (200g). This is exceptional for a standard lens with a maximum aperture of a very fast f/1.4. Although many of the lens’ parts are plastic, the lens mount is metal, but there is no rubber seal to protect the lens from weather or dust. Panasonic has included a large lens hood for the Leica DG Summilux 25mm f/1.4, but it cannot be reversed, so storage is a challenge. The outside of the lens is quite barren, as there is only a manual focus ring.

Focal Range: Another measure of this Panasonic lens’ equivalence to a 50mm lens on a traditional 35mm-format camera is that it provides a corresponding diagonal angle of view of 47°.

Focus: The focus ring on the Leica DG Summilux 25mm f/1.4 ASPH lens is quite spacious and, during use, creates virtually no noise; plus the 46mm filter thread does not turn as you focus. Photographers that use polarizing and graduated neutral density filters will appreciate this little detail. This Panasonic lens can be manually focused, reminiscent of a focus-by-wire system. Far from a negative for photographers not familiar with this kind of lens operation, your camera will show you an enlarged view of the subject automatically, without you having to search through a menu to activate this feature.

Chromatic Aberrations: Images shot with the Panasonic Leica DG Summilux 25mm f/1.4 ASPH lens show essentially no evidence of the purple or blue fringes near the edges of areas of contrast that is the usual sign of chromatic aberrations.

Macro: This Panasonic lens will focus as close as a foot (0.3m), with an optimal magnification rating of 0.11x.

The Leica DG Summilux 25mm f/1.4 ASPH is an optical winner. Set on its widest aperture it will give you excellent bokeh and a very sharp center of the frame. Shoot at f/4 and you’ll discover even the perimeter of the framed image to be detailed and clearly in focus. Because of these outstanding optical qualities, portrait photographers will like this lens for closer work.

The Panasonic Leica DG Summilux 25mm f/1.4 ASPH just may be the lens that sells more people on the Micro Four Thirds camera system. Its excellent image quality, light weight, ease of use and superior control of technical characteristics, such as bokeh and chromatic aberration, will convince some people to buy a Micro Four Thirds camera, so they can use this lens. At approximately $600 (although a price had not yet been officially released at the time of this review), they will have to pay a considerable price for the privilege. Quality costs money, but almost always delivers more value, and that’s what the Panasonic Leica DG Summilux 25mm f/1.4 ASPH does.